A 9 mile round-trip hike along the Sespe Creek to a shaded riverside campground. Hot valley air, cold river water, and plenty of scenes of recent wildfires keep up the variety, and the relatively level elevation makes it easy on the knees. A great weekend getaway in the fourth largest roadless region in the Lower 48. 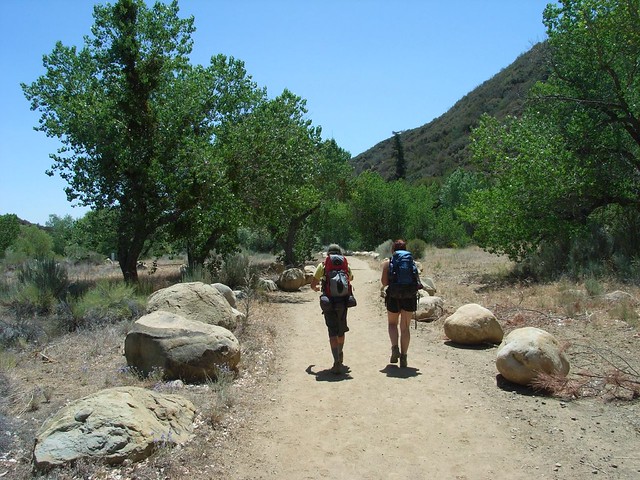 The Sespe River Trail starts at the end of a long, paved mountain road in clear sight of the impressive Piedra Blanca sandstone formation to the north. A National Recreation Trail splits north here and heads through the formation and into some deep canyons, but our trail followed the lowered but still flowing Sespe Creek into a nearly-shadeless chaparral brushland.

Although the trail is called the Sespe River Trail, the stream of water is officially called Sepse Creek — and it’s the last remaining undammed river in Southern California. More than 30 miles of the river are designated as Wild and Scenic, and there are an additional 10 miles of Upper Sespe Creek that are under consideration for the same designation. 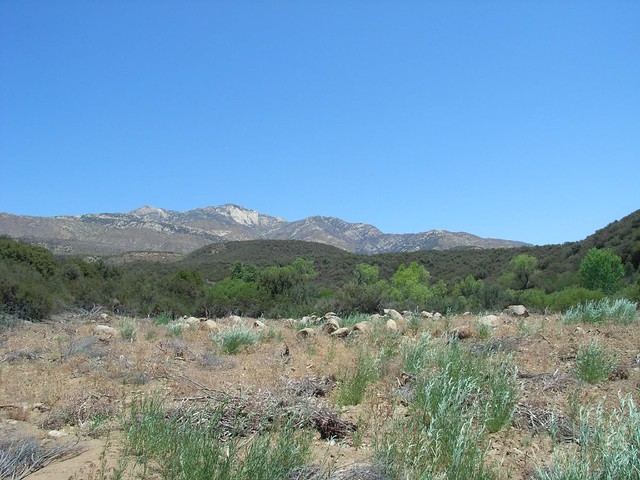 The trail is, with a few minor stretches of exception, generally level. The only things that make this challenging are the hot summer temperatures, relentless sun, and the fact that you’re not near the actual river for most of the way … of course, you’ll be able to see the shady oaks lining the riverbed, you just won’t be able to get to them for a little while. 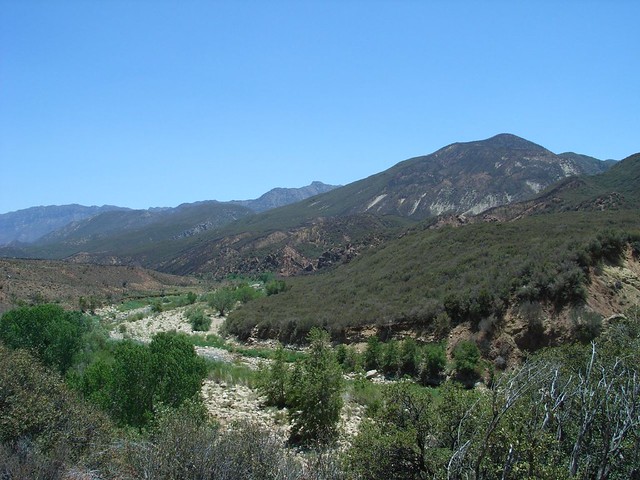 Shortly into the hike, we reached the western front of last year’s Day Fire, a four-week conflagration that burned through 160,000 acres of the Sespe Wilderness. The contrast between the spared mountains and those that caught fire was striking, to say the least. 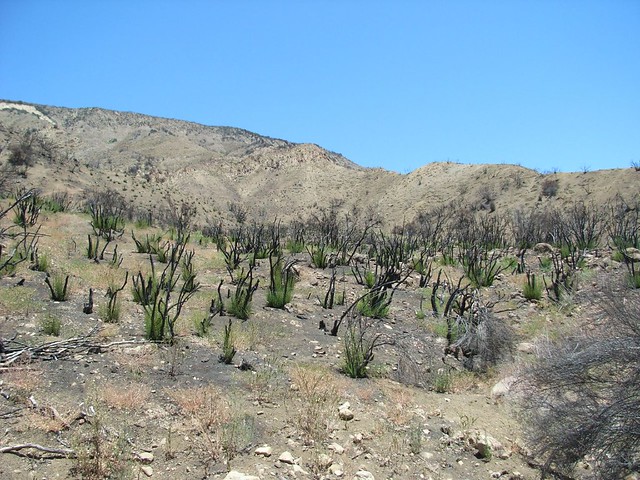 … but it was heartening to see the widespread signs of rebirth, as almost every blackened charcoal brush had a new, green version sprouting from its base. 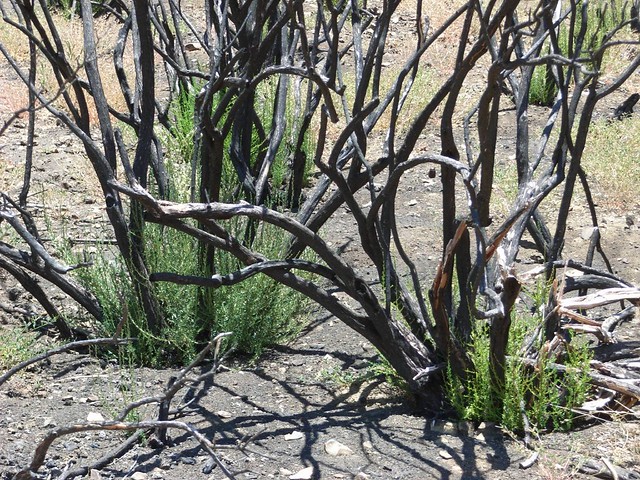 The rest of the trail’s landscape wasn’t really all that much to talk about. Of course, it probably didn’t help that it was very hot and sunny, and all we wanted to do was drop down under some shade and take a load off. Fortunately, we found such a place, near a stretch of slickrock filled with some slow-flowing pools. While our dog Dingo took a dip in the water, we all collapsed beneath a single oak tree and took a 45 minute mid-day nap. Like I said – this trip was for relaxation purposes. 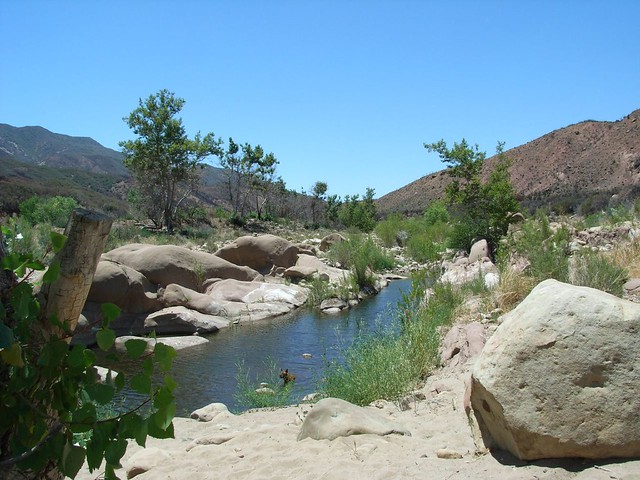 After the nap, we rounded a few more bends and ended up at Bear Creek Camp – a shaded, sandy flat with an isolated fire pit and easy access to the creek. We mainly cared about the last bit, though, and spent most of the rest of the day floating around in the cold water, heating up on a sandy bank, then plunging back in again. Who needs a spa with that kind of experience? And all it costs is a four and a half mile hike through some hot, desolate terrain. 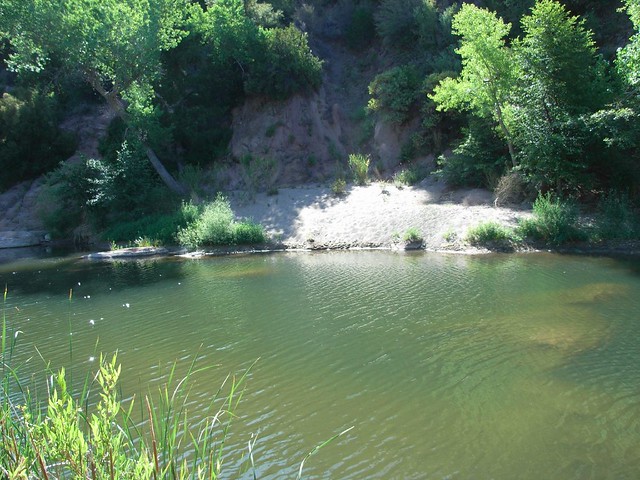 The rest of the night was spent making burritos, uncorking some wine we’d packed in with us (my contribution, a nice bottle of Cline zinfandel), and generally letting our urban woes melt away as we watched the stars explode the night sky.

In other words, just what we all needed.

Enjoy your time in this special place and don’t forget to pack out everything you packed in.

Excellent. With the exception of a potentially tricky river crossing near the trailhead, the path is clearly marked and easily graded. The path is also used by horses, so you may have to dodge some some leftover presents on the way in.

Dispersed wilderness camping is allowed with wilderness and campfire permits. Campfires may be seasonally restricted or restricted due to high fire conditions. Contact the management offices of the Los Padres National Forest for more info.

From the 33N past Ojai, pass the Wheeler Gorge Station and turn off onto Rose Valley Road after you make a significant climb. Stay straight all the way. You'll pass a ranch, an abandoned work camp, and a gun club before you get to the parking lot. Display your Adventure Pass and enjoy.

We did a day hike yesterday, Feb 14 2016 - <3 - from Piedras Blancas Trail Head up to Bear Creek Camp and it was beautiful. It was an unusually hot day so we set off at 8:30 am, took us less than two hours to do the 4.3 miles logging lots of water, food, backpacking chairs, hammock, etc... There's plenty of water in the creek, had to do some rock hopping four times crossing the creek to get to camp. All easy and doable. Camped out for the day and started our hike back around 2pm. Will be back! Campfire was allowed yesterday with online permit, but check before going since that can change.

As of 6/28/15, there was water. although low, in the creek near the trailhead. Can't say about downstream for certain.

Michael, we were planning on heading up to Sespe for the weekend. Wondering if there was any water during your visit and if you had suggestions on where to camp. Cheers

I am planning on doing this hike this weekend with my 9 year old son. Any updates since the last post? Can you do fires in a fire pit?

David, haven't been up there this season, but everywhere else in SoCal is very, very short on water these days - including streams and waterfalls that are usually flowing year-round.

Anyone know if there is water there now?

I was hoping to do this hike again this weekend. Called and spoke with a ranger, the water levels are still very low apparently. I went in November last year and there was no water, making it sort of difficult to follow along the riverbed.

Thanks for the info, Lawrence. Is there enough water to fish?

I went to the Willett Hot Springs a month ago. It was very cold out, some parts of the river was frozen. The hot spring was great, although getting out into the freezing air was unpleasant.

Has anyone been to this hike lately?