Due to the East Crater Fire along this loop, Indian Heaven Wilderness is currently closed as of 9/5/2017.

While the pacific northwest is generally known and beloved for its epic vistas and high peaks, it is also home to countless wilderness areas offering unique environments, from newly formed volcanic zones to small and quiet meadows full of wildflowers. Indian Heaven Wilderness, located two hours from Portland within the Gifford Pinchot National Forest of southern Washington is one such unique place.

Pinchot and his excellent mustache, circa 1909.

For the history nerds among us: Gifford Pinchot was the first Chief of the United States Forest Service, from 1905-1910. A key player in a complicated, fascinating and sometimes-ugly history, he is in large part responsible for the creation of national forest system which we continue to enjoy today. As one of the oldest national forests, the Gifford Pinchot National Forest was originally named the Columbia National Forest in 1908, but later renamed after the founding Forest Service Chief in 1949. Of it’s 1.32 million acres, Indian Heaven Wilderness is a special designated area within the national forest of roughly 20,782 acres.

What’s so special about it? With over 150 lakes found within a subalpine plateau featuring unique volcanic formations and a generally relaxed network of maintained trails, it offers the opportunity to visit a forested wonderland, abound with huckleberries and quiet lakeside camps within two hours of a major city. Hiking here is relatively easy to moderate, with few big climbs required to reach the countless lakes and quiet meadows. Why Indian Heaven? For almost 10,000 years, Native American communities have gathered in this area to pick huckleberries, socialize, and fish. In the northern portion of the wilderness area, the Sawtooth Berry Fields is exclusively used by local tribes today, including the Yakima, Klickitat, Wishram, Wasco, Cascade, and Umatilla as result of an agreement with the Forest Service in 1932.

Affectionately known as “mosquito heaven” for much of the summer due to the late annual snowmelt at its 4000-6000 foot elevation, the best time to visit Indian Heaven is decidedly late summer into late fall. While temperatures are chilly during the fall, it is well worth the trip. Having lived in southern California, with its more subtle change of seasons, I had been eagerly looking forward to my first REAL fall after moving back north. Indian Heaven is a moderately popular local destination for those seeking fall colors, with the huckleberries changing to striking orange, red, and even purple. As a fall backpacking destination, it did not disappoint. In fact, I’m already looking forward to going back and exploring more lakes and more trails. 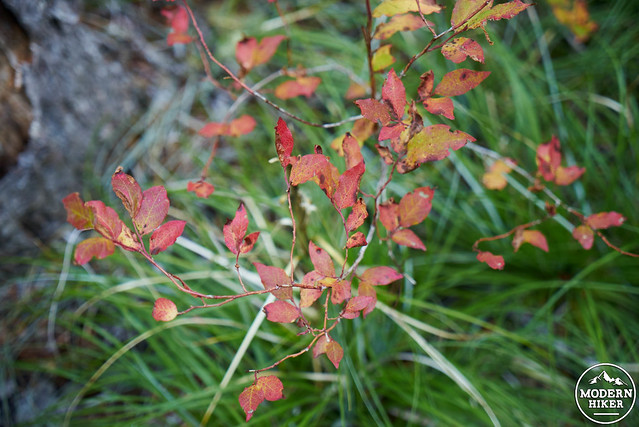 It’s important to note: The Thomas Lake and Blue Lake areas require visitors to use designated campsites, marked by a post. A map of the campsites can be found here.  Outside of these areas, there are countless previously impacted campsites among the other lakes next to the trail, not requiring a marked post. While Thomas Lake was not a campsite destination during this particular trip, it offers fantastic lakeside sites only .5 miles from the trailhead. As such, it’s a good option for families looking for backcountry camping without a long trek. 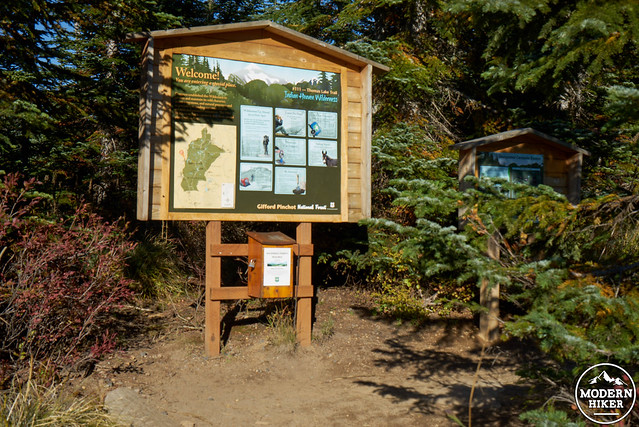 The trail starts next to the informational board next to the parking lot, where backpackers are required to fill out a free self-serve backcountry permit. While we took two nights to do this trip, shorter options are possible, including one night, or even a very long day-hike. However, two nights and three days gave us plenty of time to explore along the way. Indian Wilderness has plenty of options for side trips, including a climb of Lemei Rock, and and a visit to other lakes.

The first part of your journey will take you through the Thomas Lake area on your way to Blue Lake and your first campsite. Due to a minor dental emergency, we got a late start leaving Portland, not reaching the trailhead until 5pm, just in time for a beautiful early evening hike. The first .5 miles of the trail steadily head upward, climbing 200 feet before reaching Thomas Lake on the right, and smaller Dee and Heather Lakes to the left. As mentioned above, Thomas Lake has several backcountry camp sites. 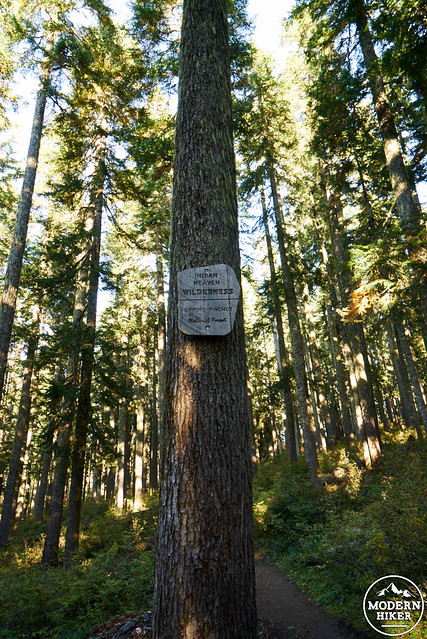 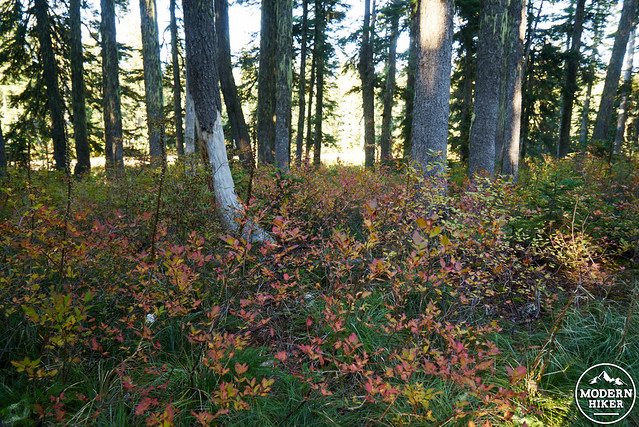 Our first glimpse of fall color! 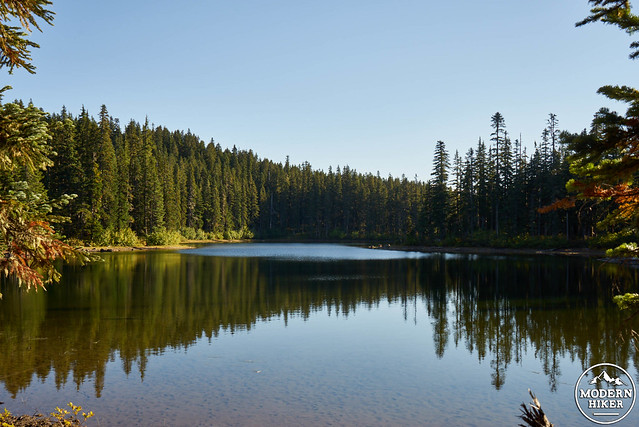 Continue past Thomas Lake and the side trail heading to Eunice Lake, as the trail continues to gradually climb through thick forest occasionally dotted with smaller lakes and ponds. At around 1.8 miles you’ll see small Naha Lake to your right, which marks the top of today’s climbing, and the start of a mellow and relatively flat section of trail alternating between beautiful meadows and stands of trees. Shortly after Naha Lake, you’ll encounter a trail junction with a now-closed trail. Stay to the right, turning south towards Blue Lake on Trail 111. At one point, you’ll pass a lush and green wall of moss. 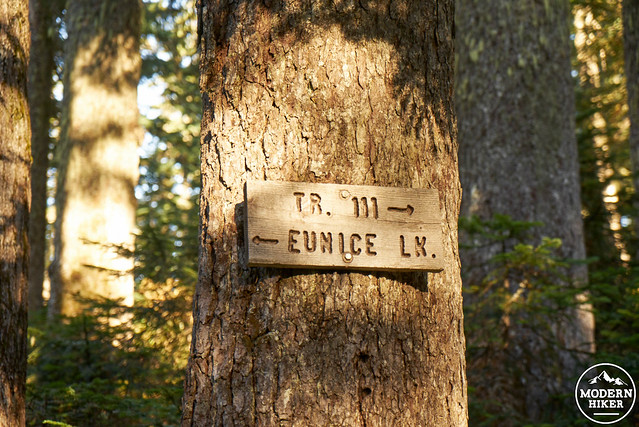 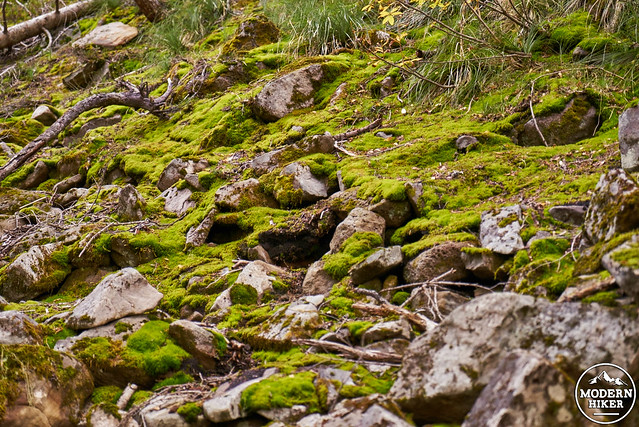 On your right, you’ll see small Lake Umtux, before finally reaching Blue Lake, a strikingly blue body of water that marks the point at which the trail also intersects with the Pacific Crest Trail (turns out, there’s a reason it’s called Blue Lake). During our trip, we arrived at roughly 6:30 pm, by which time all of the lake-side camps had already been occupied. However, following the trail and turning right at the PCT, you’ll find several other sites to the left and up the hill, as seen in this map. With the temperature quickly dropping, and our fingers feeling the cold, we had a quick dinner before hanging our food and retiring into our sleeping bags for the night.

Waking up, the morning was crisp and cold. As a Californian and frequent visitor to the Sierra Nevada Mountains (and to elevations of 10,000+ feet), I’m always pleasantly surprised at how cold it can become at 4600 feet in the pacific northwest. After coffee and breakfast, we quickly packed up and headed down the hill to Blue Lake, where we soaked in the morning sun on the shore. 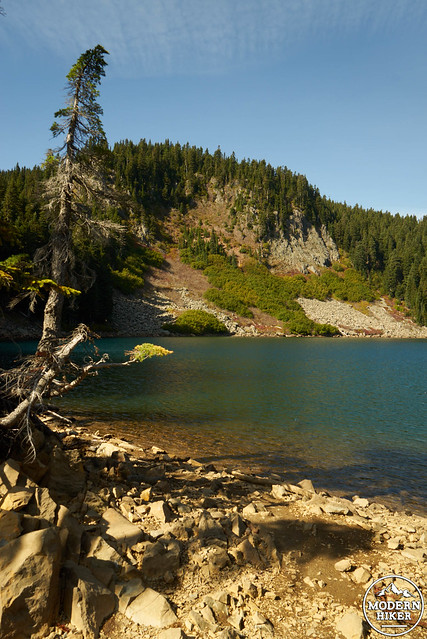 Today, your journey will take you from lovely Blue Lake via the PCT past (you guessed it) several MORE lakes (yes, there are so many), around an ancient and forested crater, and eventually to your next campsite at Deep Lake. During the early to late fall, the color of the Huckleberries becomes more vibrant as you travel upward in elevation. While trails offering epic views abound in the pacific northwest, Indian Heaven, for the most part, offers visitors the opportunity to observe the smaller and quieter ecosystems existing in this subalpine treasure. Quiet and open meadows suddenly appear, offering excellent places to enjoy a snack and listen to the birds, before the trail heads back into the forest. 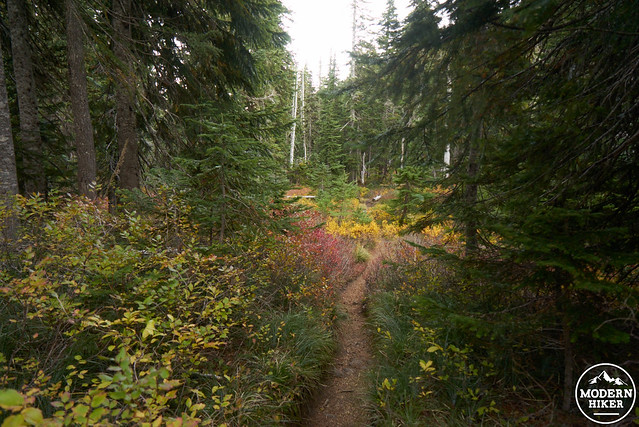 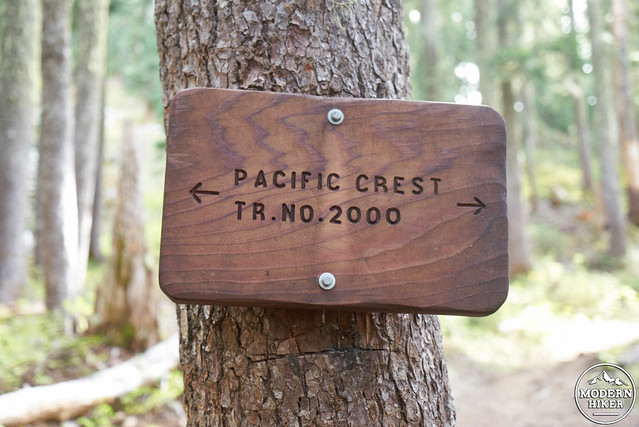 As you head north on the PCT from Blue Lake, you’ll find yourself steadily climbing the left flank of East Crater, an ancient volcano which is now forested and can be seen rising to your right. At brief points during this section, you’ll also see a more recently erupted volcano, Mt Saint Helens peaking out of the distance to the northwest. 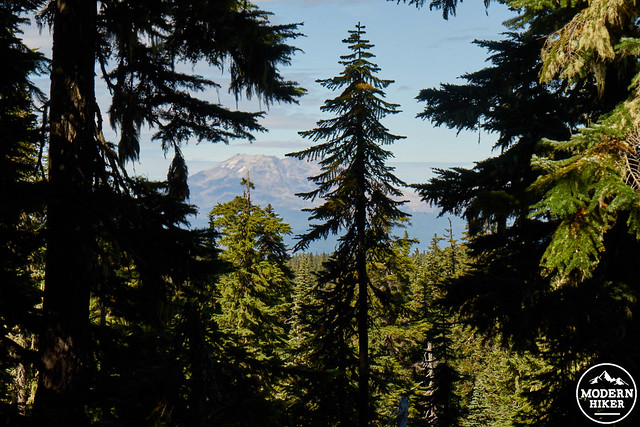 After reaching a highpoint of roughly 4965 feet, you’ll begin to descend before finally reaching Junction Lake (which, by the way, provides an excellent lunch spot). As the name suggests, there is also a trail junction here, which you will take to the right onto Trail 179 towards Lemei Lake (not trail 48). At this point, the trail gradually heads upward again through an area dotted with countless meadows. Near Lemei Lake, you might encounter a section of trail still lined with ice, which is both beautiful and fun to look at up close. 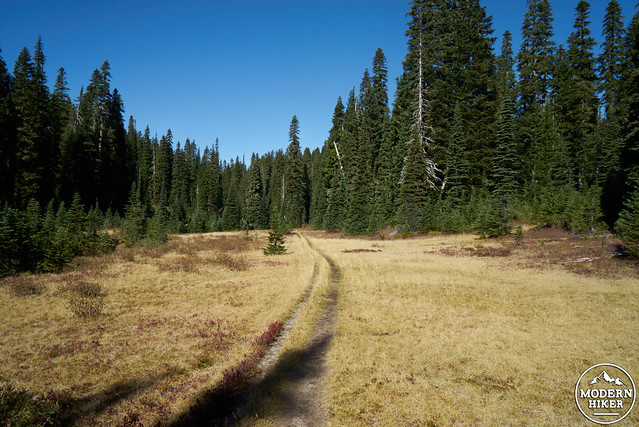 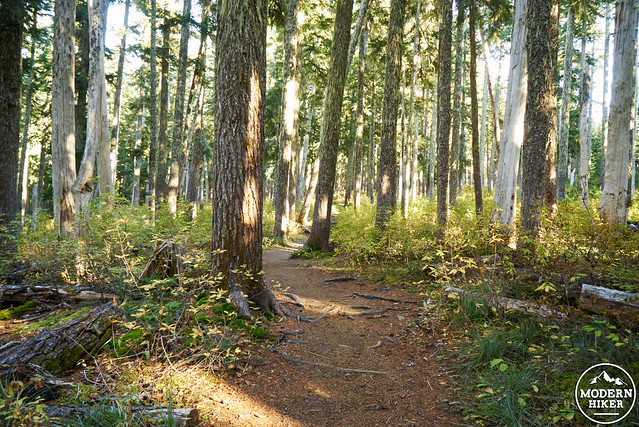 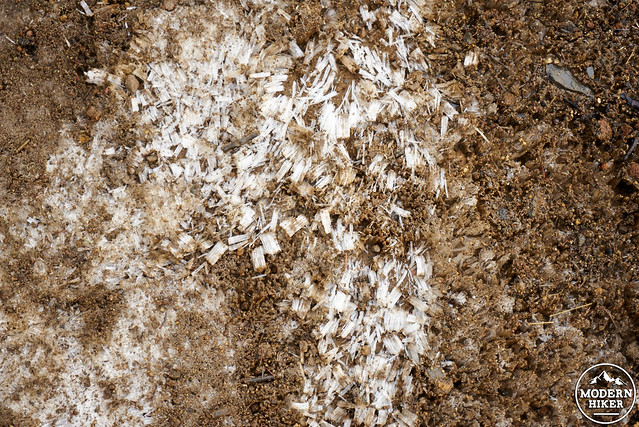 At around 3.9 miles, you’ll reach a junction with Trail 33. Stay to the right, continuing on to Deep Lake. After another relatively short climb, you’ll reach the high point for today. You’ll soon see Cultus Lake on your right, which is immediately followed by a .2 mile side trail also to the right leading to Deep Lake, your evening destination. There are numerous impacted campsites available around the lake, which can be reached by an informal trail that travels its perimeter. We were lucky enough to snag a gorgeous spot on the northwest side of the lake. During the fall, the lake is edged with more colorful huckleberry reflected in the blue-green water. 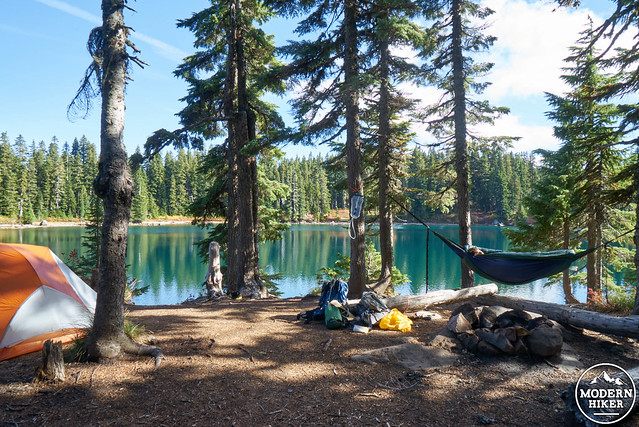 Taking a nap next to Deep Lake 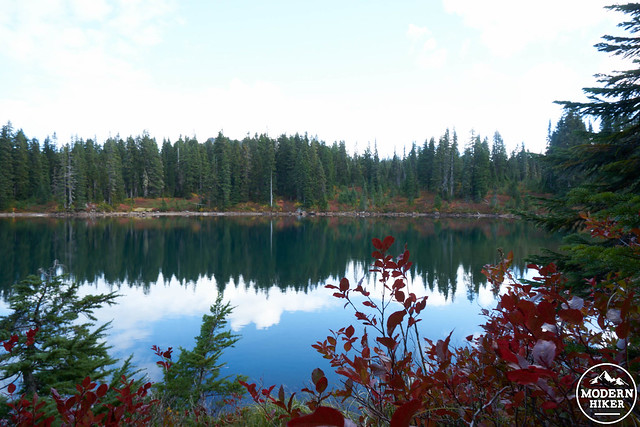 Having arrived at our site during the late afternoon, we enjoyed several hours of sunbathing and reading in our hammock, enjoying the quiet calm water of the lake. Again, night time fall temperatures were chilly, but campers prepared with warm clothes (and in our case, tea) should be reasonably comfortable. 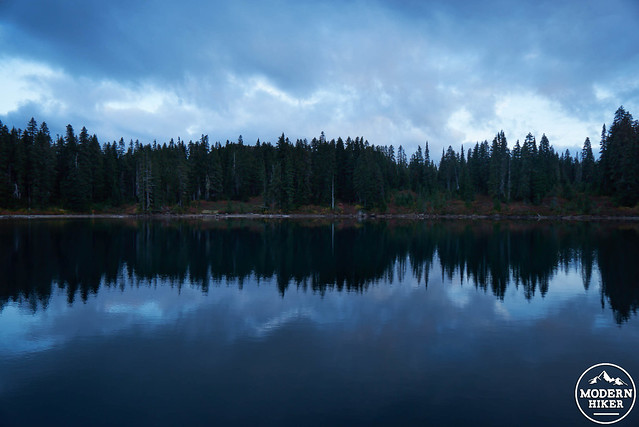 Your third day on the trail will be the longest, traveling roughly 8 miles before returning to your car. However, it’s an easy and enjoyable walk, a majority of which will be heading steadily downhill at a comfortable pace. Starting your morning at Deep Lake, you’ll retrace your steps back to Trail 33. 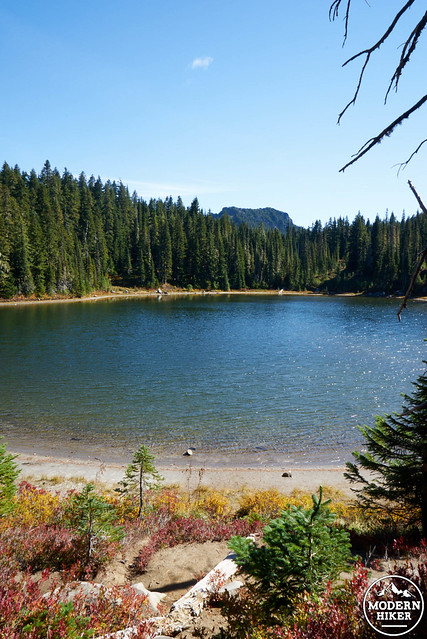 This time, instead of heading back south on Trail 179, as you did the day before, you’ll stay straight on Trail 33 towards Clear Lake, a large and beautiful lake you’ll shortly encounter on your left. Follow this trail for .8 miles, before again reaching a junction with the PCT. Turn left to head south through a section of picturesque trees as the trail gradually rollercoasters along the hillside. You’ll see numerous lakes to your right, with several small spur trails offering opportunities to visit (another great place for a snack, perhaps). 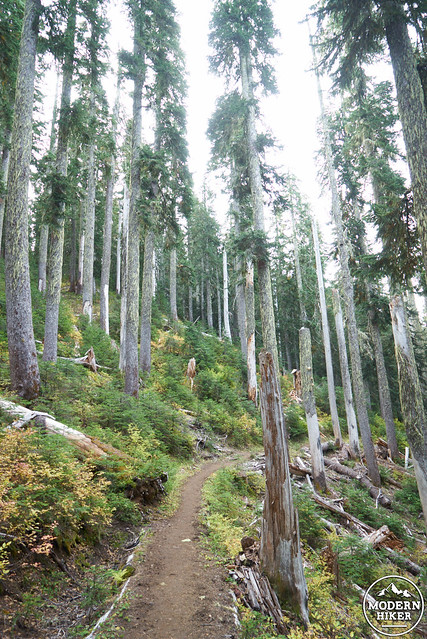 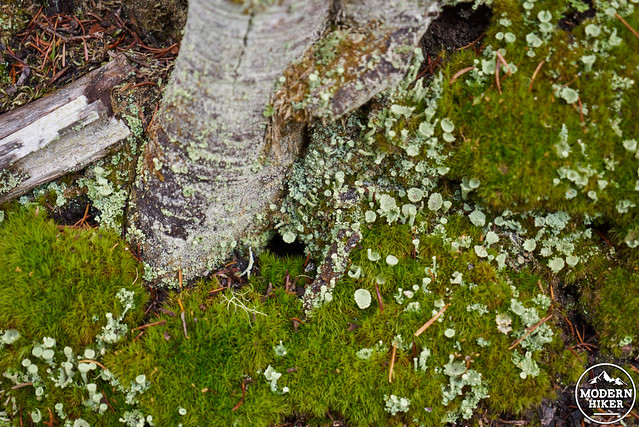 At the junction with the trail to Elk Lake, continue straight, traveling for another 1 mile to again reach Junction Lake. At this point, you’ll retrace your steps back back to Blue Lake. Continue south on the PCT, again traveling past East Crater before reaching Blue Lake. Turn right on Trail 111 and walk 1.3 miles to the now-closed trail intersection before Naha Lake 1.3 miles later, turning towards Road 65. After another 2 miles, during which time you’ll again pass Thomas Lake, you’ll reach the trailhead and parking lot. 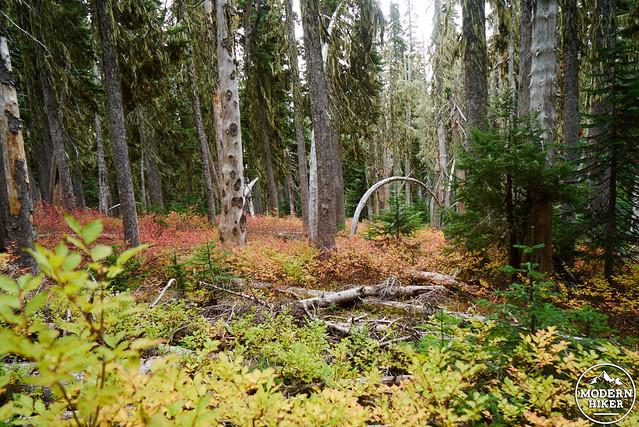 Weather: Always check the weather when planning a backpacking trip. You can find weather reports for the southwest Washington Cascades here.

Food storage: All food must be safely stored from bears (and other critters), either using a bear canister (not required, but suggested) or a food hanging system.

Huckleberries: Certain northern portions of Indian Heaven Wilderness are marked by berry picking rights for local Native American communities. If you happen to travel further north than the trail described in this guide, please respect all signs in regards to gathering berries.

Well maintained and well marked trails throughout the trip.

This trip includes the (encouraged) option to backcountry camp next to several picturesque lakes. For a developed campground within driving distance of the trailhead, see Paradise Creek campground, which is typically open between late May and mid-September, and a 40 minute drive to the Thomas Lake trailhead.