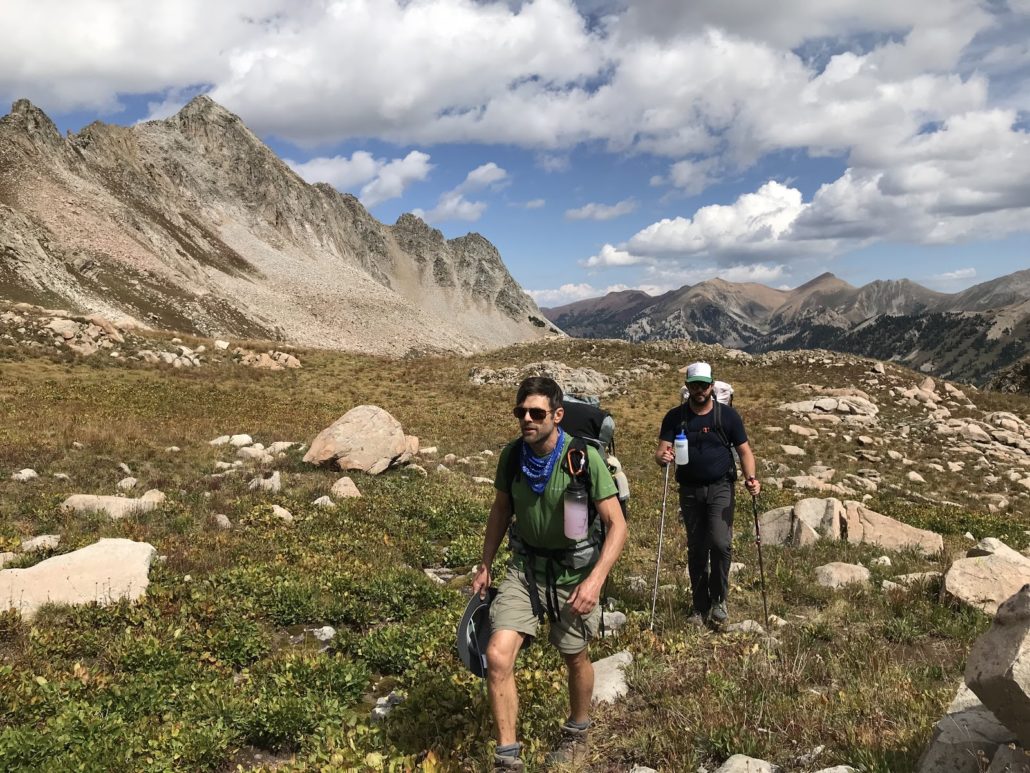 JL: The start of a high mountain backpacking trip can be a system shock. Heading up the first ascent with a loaded pack, the body is in full protest and the mind full of self-doubt. The end of the trip is typically an achy knee descent. But … what if a chunk of weight was removed from the equation? What would ten fewer pounds do for the spirit and joints? A new wave of ultralight camping gear seeks to answer that question, moving past its fringe roots into the mainstream. Curiously, the less the equipment weighs, the heavier its price tag hangs. Should you pay more for something potentially less durable? Corey and I selected a rugged route with five high passes to give the latest ultralight designs a thorough test. 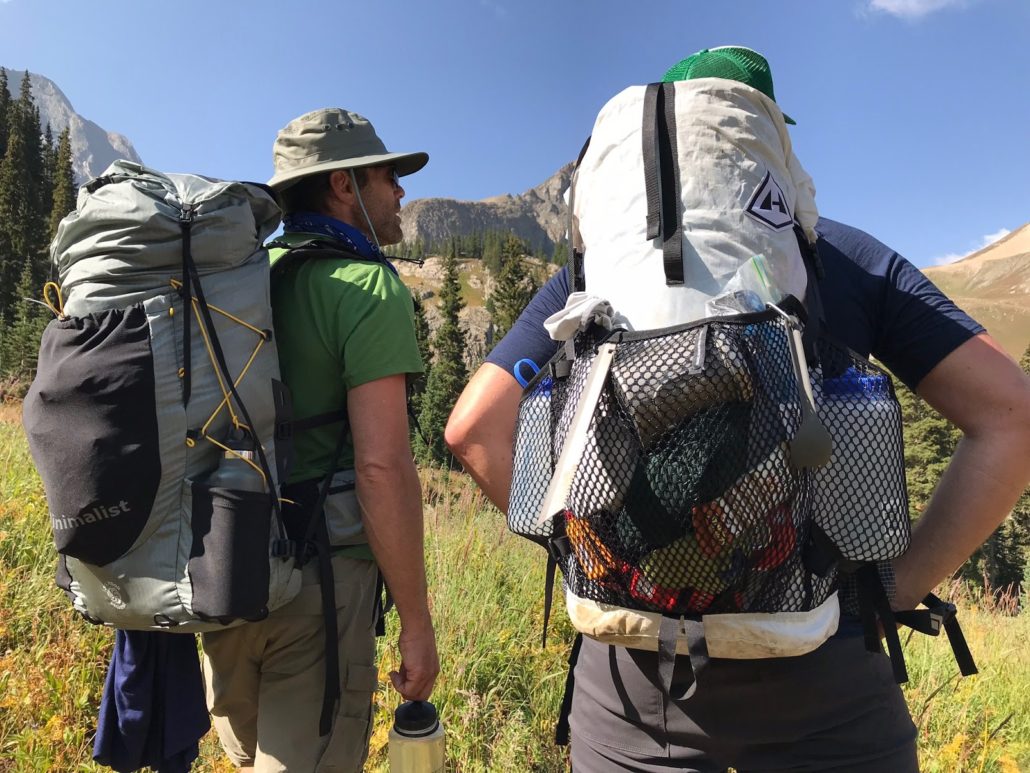 JL: On my back was the 48L ç Minimalist , weighing just 36 oz (1020 g) with a thin stay configuration transferring weight directly to its hip belt. I’d selected the optional vest front with an array of pockets and attachment points.

The Minimalist‘s greatest asset is its imperceptibility. Once adjusted properly, the pack sat so snugly that I often forgot about it. The material felt ultra-durable and the side pockets held water bottles tightly. One of the side pockets is designed taller than the other to also fit an ultralight tent or hydration bladder.

The innovative vest lets you keep a lot of items within easy reach (sunblock, sunglasses, snacks, etc), however this seemed a bit extraneous with two deep hip containers built into the waist belt. The chest straps were a bit constrictive on my breath so I had them unclipped the majority of the hike. Perhaps with a lighter load the design would become useful when bombing downhill in a run.

Although the main compartment rolls shut like a dry bag, it was a mistake to assume this meant it was waterproof. After a harsh 30 minutes of rain and hail I found gear to be wet in all kinds of peculiar places throughout the pack. There is, however, one waterproof pocket on the top compartment ideal for protecting maps, permits, and electronics.

CC: I’d long been a fan of Hyperlite, but only from afar.  This was my first time wearing one for any length of time.  At just 32 oz, the Windrider is among the absolute lightest packs available.

Coming fresh from the Outdoor Retailer show, I’d just seen the latest and greatest new suspension systems, articulating hips, shoulders and whatever other new tech was aimed at making your backpacking load easier to carry.  When I pulled the Windrider out of the box I couldn’t help but wonder if this super minimal, no-bells-and-whistles pack was somehow lacking in the construction required for a comfortable ride. I was wrong — the Hyperlite was one of the most comfortable packs I’ve worn for an extended period of time.  In 40 miles and 5 mountain passes it needed only minimal adjustments along the way. The pack really is “set it and forget it”.

As far as organization goes, it doesn’t get much simpler. 1 large main compartment with a dry bag style closure, 3 large exterior pockets made of netting, and 2 generous hip belt pockets. If you like a pocket for everything, this isn’t your pack, but I found it to be adequate, and in exchange for the weight savings the simplicity was a welcome feature. I really loved the netting on the exterior pockets. The netting let me see exactly where everything was and access it quickly. For example, when we came to a water source, refilling was as easy as spotting my filter in the exterior pocket and grabbing it. No digging around and unpacking. 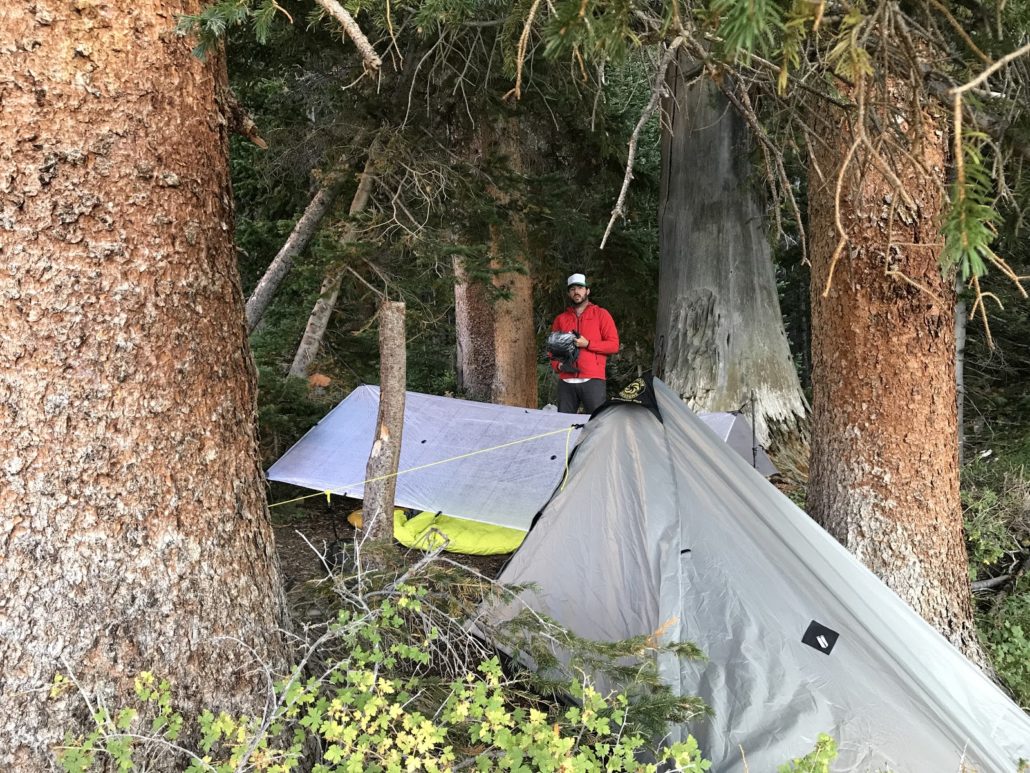 JL: At the bottom of my pack sat a Six Moon Deschutes Plus Tarp, adding just 16 oz (450 g) to the tally. The first time I fumbled with the setup was in the pitch dark, but even with a janky setup it kept me safe from morning sprinkles. The fabric is light as tissue paper, it dries incredibly fast, and has a thoughtful mesh skirt for allowing a breeze in while keeping the mozzies out.

CC: For my shelter, I used a modular system: the Hyperlite Tarp w Echo Insert. I personally don’t love just sleeping under the tarp, so I thought this setup could be perfect: Tarp for when conditions are ideal with the option of adding the Insert when I wanted a little more protection from the elements and anything creepy and/or crawly. On this trip, both performed wonderfully. I did 2.5 nights with the tarp + insert and 1.5 under just the tarp. Why the .5? Well that night I had 3 visits from a little pika who apparently wanted to cuddle. After my third wake up call I decided enough was enough and added the insert. One great feature is that the insert doesn’t require additional setup, simply grab it and clip it to the tarp. Within a few minutes I was back under the shelter, this time with a little extra security that provided a great night’s sleep. 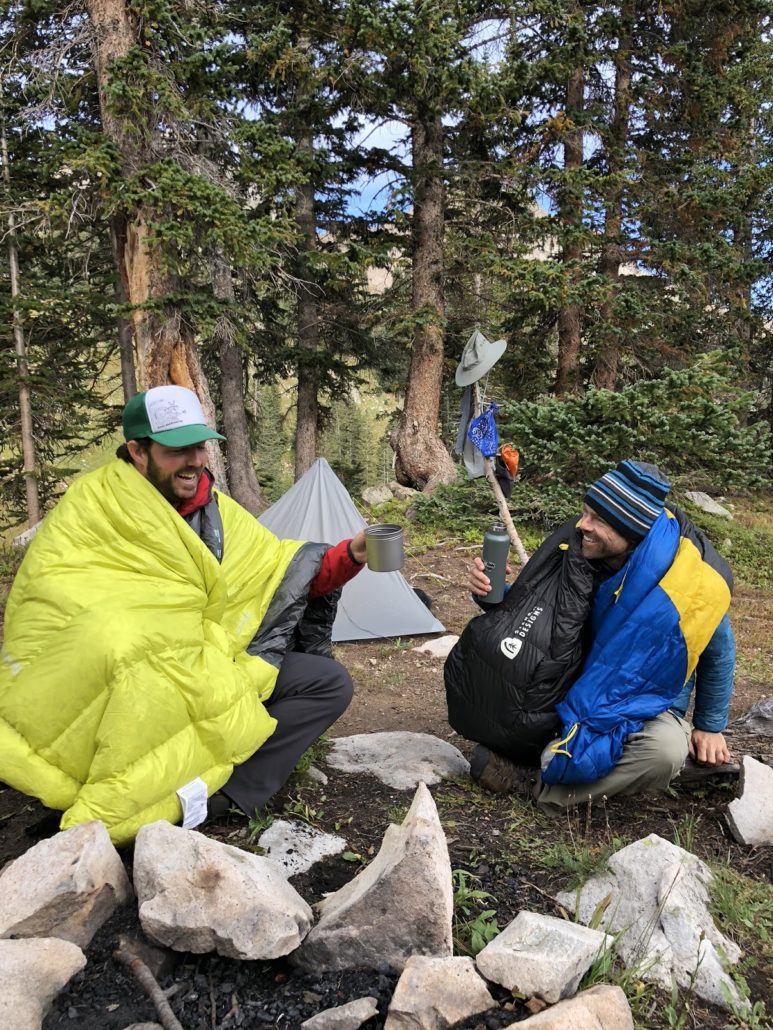 JL:  In late August the weather in the Rockies is already coming over the cold bend. Wildflowers are mostly gone, leaves are beginning to turn, and at 10,000 feet I was mummied up like King Tut in the bag with all my clothes on. I always got over the hump, but there were moments that a degree lower would have sent me over to Corey’s tent ready to little-spoon. The 35 degree Sierra Designs Nitro 800 (35˚) barely did the job, though I marveled at its feather-light weight and enjoyed the ability to pop my feet out of a convenient ventilation slot. The zipper tracks are advertised as anti-snag, but we all know how mischievous bag zippers are, especially if there is any urgency to get out.  Overall the features and weight of the bag were awesome, I just underestimated the temperature at altitude.

CC:  I have heard rumblings about sleeping quilts for a while now in the ultralight community. Since most of the insulating power of a sleeping bag is lost when you lay on it, why not simply remove the bottom of the sleeping bag and sleep directly on the mat? Armed with the Thermarest Corus Quilt and NeoAir Xlite, I set out to see what all the hype is about. As someone who typically sleeps on my side, I loved the quilt. I finally had room to toss and turn unencumbered by zippers. The quilt came with velcro loops that I attached to my pad, avoiding that middle of the night wake up call triggered by sliding off my pad and ending up on the cold ground. Like Jonathan, I tested the lower limits of the comfort range on the quilt at 35 degrees. Anything colder and I would opt for a full bag, but for the bulk of 3 season camping I am a fully converted quilt sleeper.

I wanted to give a couple other shoutouts to stand-out pieces of gear. For cooking, I used a single pot / cup set up in the Vargo Outdoors BOT 700. This titanium cup sealed tight, allowing me to cold soak food as I walked, resulting in meals that were either ready to eat (cold) or quickly warmed up, already hydrated with minimal fuel usage. To round out my ultralight cook setup, I brought along the MSR Pocket Rocket 2. The stove worked like a dream, however the built in lighter on the latest version, didn’t work from the start. I highly recommend the stove, but would suggest opting for the version without the built in lighter. For a shell, Patagonia sent over a Storm Racer lightweight shell to try. On days 4 of our hike, a light rainstorm quickly turned into a downpour / hailstorm. The shell was perfect, totally breathable and with a light stretch I was able to soldier on, my temperature perfectly regulated and my body dry.

Are you an ultralight backpacker?  Curious to learn more? Don’t hesitate to reach out with any questions!

Modern Hiker occasionally receives products or services from companies for free or at-cost for review purposes. Modern Hiker may receive a percentage of sales via affiliate links from these companies but does not accept compensation for editorial reviews. Companies being reviewed are not allowed to exercise creative or editorial control over these posts.