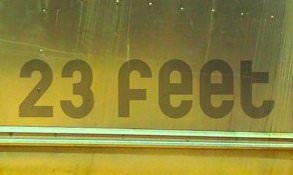 As I write this from my desk in East West Hollywood (and you read it from your desk or laptop or mobile gizmo in the greater sprawl of Los Angeles or beyond), surely we can agree that at one point or another we’ve asked ourselves, “I wonder if I could just unplug and live off the grid somewhere?”

Director Allie Bombach spent some time with a crew touring the southwest to find people who are doing just that – living out of their cars, vans, or abandoned school buses in order to hike, climb, or surf as much as they want to. Their finished documentary is called 23 Feet, and from now through the end of April they’re soliciting for donations through Kickstarter.

The money will go to help finishing the film and funding a travelling screening. The filmmakers plan on taking their Airstream out on the road again with a mobile theater, hoping to screen the film in some of the same wilderness destinations that inspired its subjects.

The trailer is posted below. As of the time of writing, they’ve met their fundraising goal – but post production always ends up costing more than you plan, so chip in a few bucks if you can. I’ll definitely be keeping tabs on this project – I’m sure there’ll be a screening somewhere in the San Gabriels this summer.