A pilot shuttle program is on its way to Chantry Flat, the extremely popular hiking destination that allows hikers easy access to Hermit Falls and Sturtevant Falls, along with longer treks to Mount Wilson and the historic Camp Sturtevant.

Following suit with the popular shuttle to Fish Canyon, the Angeles National Forest will be testing a temporary pilot shuttle on several upcoming weekends, which will run from the Arcadia Gold Line Station to the Chanty Flat picnic area. The Gold Line station is within walking distance of the Forest Service Headquarters, the Arcadia REI, and an In-N-Out. Chantry Flat is home to Adams’ Pack Station, which not only makes some killer burgers and BBQ, but will also be holding some free live music on several of these shuttle days! 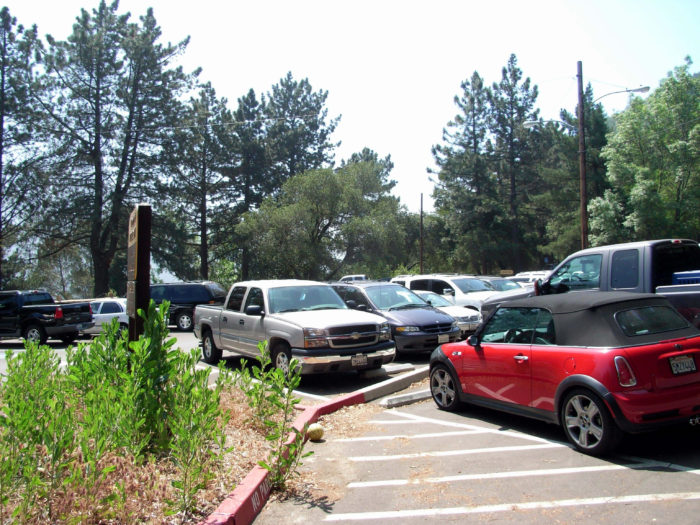 the Chantry Flat parking lot. Take Metro and avoid this!

The shuttles will run free of charge, courtesy of funds from Car-less California and – despite Chantry Flat not being a part of the San Gabriel Mountains National Monument – this pilot program is a direct result of the new Monument Management Plan (which is currently in its public comment period).

No word yet on the frequency of the shuttles, but the first shuttle will depart from Arcadia at 7AM and the last return trip from Chantry Flat will be at 4PM.

The shuttles will run the following days:

On those days, the Forest Service is looking for volunteers to help staff informational kiosks at Arcadia and Chantry Flat in four-hour shifts. If you are interested, please sign up here. There is a briefing session in person or via phone on Friday, September 16.

The new push for transportation options is one of the things we’re most excited about in the new San Gabriel Mountains National Monument management plan, and we are extremely happy to see that the popular Chantry Flat area may be benefiting from the new designation even though its outside of the Monument’s boundaries. We first wondered why there wasn’t a shuttle to Chantry Flat back in 2010, and we think Santa Anita Canyon’s popularity and extremely limited parking make this a perfect place to test out the next transit shuttle in the San Gabriel Mountains.

We’ll update this post with any additional information as we get it.

Sept. 8: The September 17th date is considered a “soft launch” / test run for the shuttle. While the shuttle will be operational, the main purpose of that day is to work out the kinks and see how things run for what we assume will be the “official” launch the following weekend on National Public Lands Day. The Forest Service still needs volunteers on that day (and all days!), but if you show up on the 17th specifically to use the shuttle, please be patient. There is still no word on a schedule or operating hours for the shuttle, but emails suggest that will be finalized in the lead-up to National Public Lands Day.