If you look back at the history and evolution of outdoor gear and apparel, it’s clear that we have come a long way. We rely on our gear to get us there and back, wherever that might be, all in one piece. It’s mind blowing to reflect on alpine pioneers like Tenzing and Hilary. Think of what they were wearing. Look at what they were depending on. When it comes to snow sports like skiing and snowboarding, ice climbing or snowshoeing, I mean helmets weren’t even a “thing” until as recently as the 90’s…

With technology at its greatest, and the outdoor industry as a booming and evolving economic force, we have certainly made strides in what is possible when it comes to our gear. But that is not to say we haven’t learned anything from previous generations’ strides and endeavors. Certain methods and practices have remained relevant for hundreds of years, and will continue to do so. 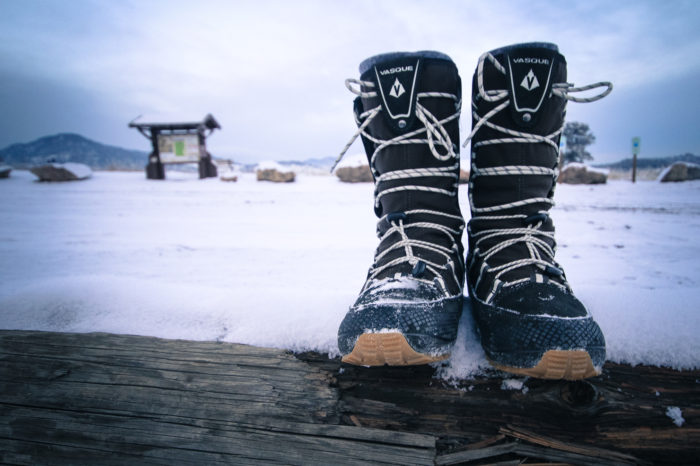 Which brings me to to the Vasque Lost 40 winter boot. In a nod to the Mukluk, pioneered by North American Indians, Vasque has brought us another revelation in outdoor gear and apparel. This style of winter boot was made popular by European settlers, fur traders, hunters and pioneers because of its warmth and flexibility.

Traditionally, Mukluks are soft boots created by indigenous people to better maneuver the natural environment and to stay warm. Mukluks were typically made from hide. The softness of the leather enabled the wearer to traverse various terrains and do so with better mobility. Warm lining on the inside was traditionally done with animal fur, which added warmth as well as breathability. This is key to its design. The softness allows air to circulate in the boot and around the foot, a crucial factor in the winter. If you wear boots that don’t allow perspiration to be released, then sweat will accumulate inside and your foot could freeze, leading to frostbite. 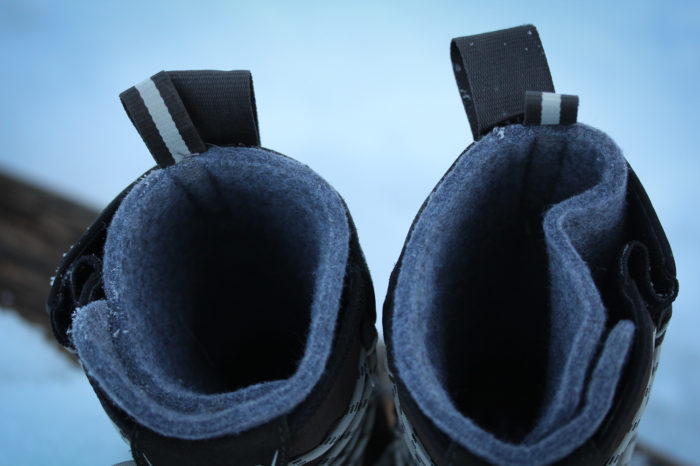 Now take that, and replace the hide with today’s soft-shell and suede, the fur for felted wool, add Vibram Soles, and you get the Lost 40. Vasque named the boot after the Lost 40 Wilderness area in Northern Minnesota. Fun fact: This area is a rugged terrain that is home to the last stands of virgin old growth red and white pine in the state. With a name as evocative as that, it’s pretty clear why this boot should be your boot of choice for all of your winter adventures.

Best Use: Winter and Snowsports

This boot is water and snow proof on the outside, and the felt wool liner on the inside keeps the snow out and the warmth in. The wool is breathable, keeping your feet dry, and is also removable. The dual lacing zone makes tightening and securing the boot a breeze, and the laces stay locked in place with the upper lace garage.

Worth Noting: The Vibram Sole Icetrek Compound adds an element of functionality that from my experience, I have yet to find anywhere else. Last year, Vibram wowed people at the 2016 winter OR with their introduction of the new Icetrek rubber sole, that quite literally “sticks to ice”. It will grip to both wet and dry ice, making this boot a killer snow boot all on its own. No trekkers needed.

Another thing I want to mention is my very first experience with the shoe. When they arrived in the mail and I took them out of the box, naturally I wanted to try them on. I attempted to stick my foot in, and found that I couldn’t get past the ankle part of the shoe. I tried, and tried, and to no avail was convinced I had maybe received the wrong size. I contacted the company and they told me that they do typically take a bit of effort to get on. But I was literally exhausted from trying to do so, and asked to be sent a size up. When the next pair arrived, I tried them on, and found that just like before they were difficult, but this time I was able to wiggle my way in. After using them multiple times, I have no trouble getting them on and off. I do think the shoe needs a few runs to loosen up. But trust me, it’s worth it.

Testing in the Field: Winter in Colorado has been great this year, and I have had the chance to take this boot out on multiple occasions and in various types of conditions. My first go at the boot was on a 10 degree day in December. It had dumped snow for the first time of the year in the Front Range, and temperatures were fluctuating to near and below zero degrees. But that didn’t stop me. I was eager to get out there and a enjoy the snow. Luckily I had the Lost 40’s on hand and needed to try them out. Perfect.

I didn’t know how lucky I had it until I took my first step into deep snow. Testing the water, I stuck my foot straight in to see how far I would sink. The snow covered the boot and went almost all the way up to my knee. When I stepped back, I was surprised to see that snow had not fallen down into my boot. I was good. So I started out on the hike with no trekkers and no snowshoes just to see what I was really working with. I found that I could walk along the semi packed snow trail in the boot alone just as well as I could on a dry dirt. I was amazed. I continued on the hike for a round trip of about 2 miles. I ventured on and off the trail as I was trying to get shots of frozen pinecones and ice hanging from trees.  I lost myself as I always do in what I call “the hunt” of photography. By the time I began heading back, the sun was almost down. I made it back to the car and looked back on the area I had just hiked and it hit me… I hadn’t noticed my feet once the entire time. I mean, I frolicked and played in the fresh snow, in 10 degree weather for about 2 and half hours and did not once think “Ugh my toes are freezing!”. My mind was blown. 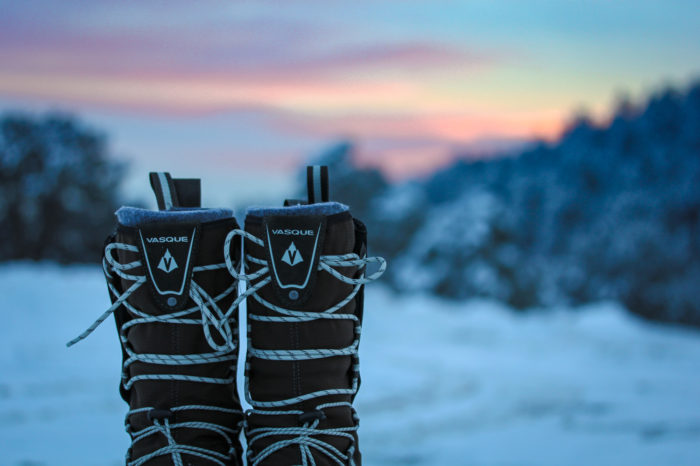 My next go at the boots was on a trip to Steamboat Springs where I had big plans to snowshoe Rabbit Ears Pass. Typically when I snowshoe I just wear my regular gore tex hiking boots and gaiters. This time I had the Lost 40’s to try out. With the boots on, I locked into my snowshoes and set out. The snow was deep but the sun was out and the air was warm. I noticed as I always do that the snowshoes were sort of “flopping around” in the back where my heel sits. It was then that I realized something about my boots that I hadn’t before. The back of the boot is lined with a series of loops that go all the way up to the top. Now, my snowshoes have a back heel strap that typically wraps around the back of your foot, locks in place, and is supposed to keep the heel connected to the snowshoe. But most of the time I find it doesn’t do a very good job and the straps slips off. This is when I decided to feed that strap through the loops on the back of the boot. Again, mind-blown. I morphed into a snow crushing machine and proceeded to destroy powder the entire 4 miles of the hike without hesitation.

After a few days of skiing, I decided to go on a low-key, casual hike at a nearby trail. I put on the boots, grabbed the dog, and went out for a walk. We palled around the trail for a while, searching for the frozen waterfall. Again, I had no trouble traversing the trail in my boots. It wasn’t until I reached a very steep incline which would take me to a sort of bird’s eye view of the falls, that I ran into a little trouble. The steep incline without spikes or trekkers on my feet made it more slippery than usual, and I found myself sort of bent over, using my hands to keep my weight forward and not sliding back down the slope. In the boots defense, I think you’d be hard-pressed to find any shoe that would maintain contact with that steep of a pitch. This might have been a good time to get out the trekkers had I had them with me. Nevertheless, I made it to the top without wiping out.

Final Thoughts: I have had a number of snow boots over the years. One’s that range from furry topped, to blanket patterns, boots more for style than functionality, as well as boots deemed “waterproof”. Here’s my thing… If you, like me, love to get outside in the winter, if you are a snowshoer, a winter hiker, or work in the outdoors during the cold season, this is the boot I’d want to have. For people who need a snow boot to simply get out the door to their car, or from the house to the grocery store, this is not the one for you. But if you live in the mountains, or are constantly confronting snow with cold and wet conditions, you need something like this. This is the kind of boot that once you have on, you don’t have to think about. You can go about your day, go about your work, and not worry about accidentally stepping into that puddle of ice water, venturing too far into the snow, or cramming a foot warmer down into your shoe because your toes feel like they might fall off. This is a “set it and forget it” kind of boot. No fuss. No nonsense. Vasque describes it as “tough, technical, built for cold”. If this sounds relevant to your lifestyle, I think you might have just found “the one”.