The day I finally discovered the beauty of a sleeping quilt was a happy day in my backpacking life. After years (so many years) of never really sleeping well while backpacking, switching to a quilt has been a vital part of my new and improved sleep system. No more feeling constricted and tangled in a tiny mummy bag, rejoice! Just in case “sleeping quilt” is a new term for you (it’s okay, I’ve only semi-recently discovered them too), let’s quickly go over how they’re different from a traditional backpacking sleeping bag, and why they’re also AMAZING (as you can see, I’m biased).

Here’s the basic premise of a quilt: While they may look semi-similar on their top sides compared to traditional mummy or rectangular sleeping bags, quilts are open to the pad along their bottom. Most also lack a zipper, and instead may use a combination of buttons, draw cords or pad attachment straps. Some include fully sewn foot boxes, such as found on a mummy bag, or a hybrid design that opens up like a blanket for warmer weather. 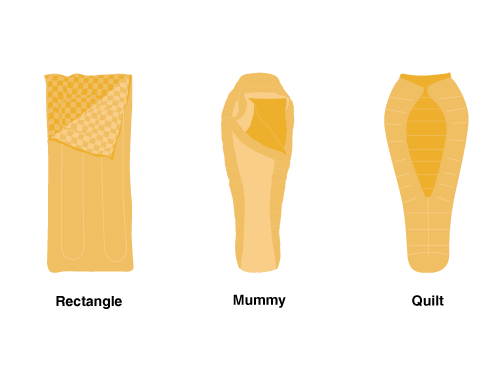 What’s the point of having an open system like this? Most of the down between your body and a sleeping pad is going to be compressed anyway, and thus quilts depend on two things: having a warm pad with some level of insulation (which many people already carry), and managing cold drafts by either wrapping the wider quilt around your body or attaching it to the pad. They also don’t have an attached hood, since you’ll either be tucking your head into the quilt itself or wearing a hat. This all saves weight and maximizes the usefulness of the pad and hat you’re likely already carrying in your pack. 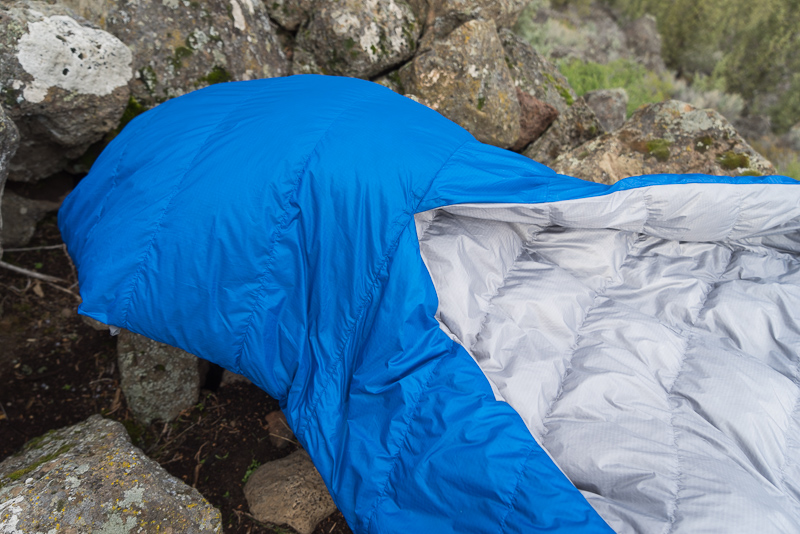 Have I piqued your curiosity yet?

Enter the Sierra Designs Backcountry 15 Degree Quilt, a minimalist sleep system with surprising innovations that make for a really cozy experience. While its EN lower limit is rated to 15 degrees, it’s important to note that it’s rated at an EN comfort limit of 28 degrees. That is, it would be effective down to 15 degrees but you likely won’t feel comfortable below 28 degrees. I found this rating to be spot on, as I recently tested it while camping overnight at Smith Rock State Park on a perfectly chilly 30 degree night. It also features dridown insulation, which can also be traced via Track my Down (mine came from China).

Before moving on I have a confession to make: I already own two quilts and one mummy bag (and yes, I actually use all of them. What if I need to camp in the snow, just for fun?). I fashion myself a very discerning audience when it comes to anything sleep-related. Not only am I a life-long side sleeper, but I toss and turn all night long. I know quilts, and I’m happy to report that the Backcountry 15 degree offers a great balance between affordability and comfort while also including some amazing innovations. 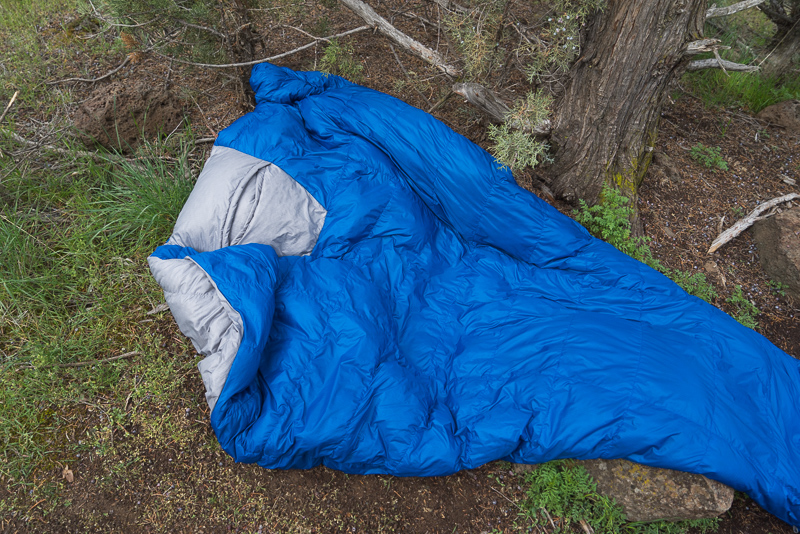 It’s all in the Hood

First off, let’s talk about that hood. While I was a little confused about it at first, I’m pretty sold on the design and wish others manufacturers would offer something similar. 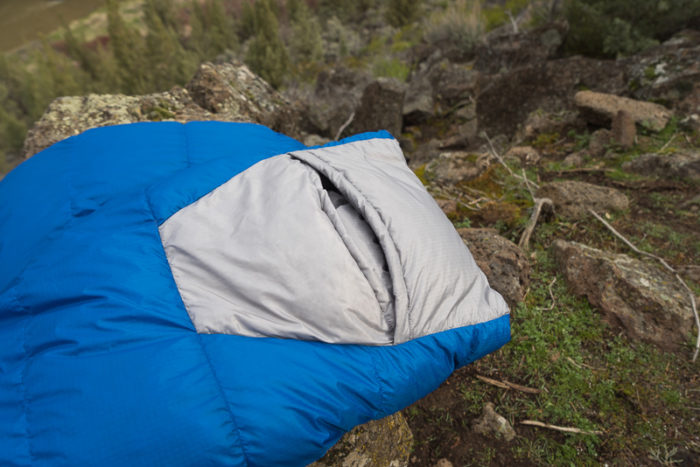 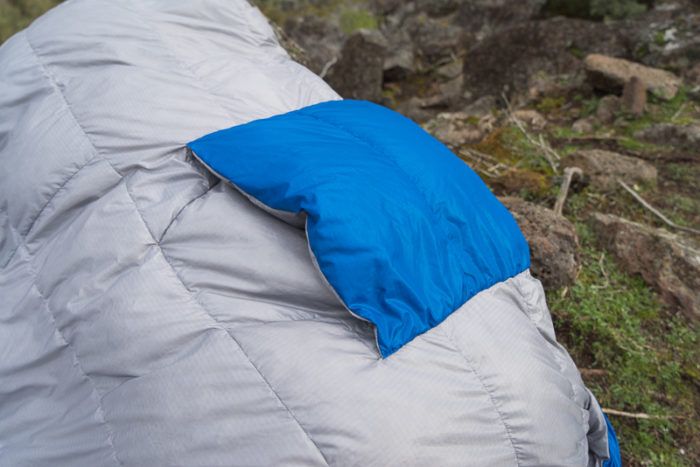 If you’re a back sleeper, the hood is going to be most useful for you. It fully replaces the need to wear a hat (that you will inevitably spend all night trying to keep on anyways). For side sleepers, the hood closes up thanks to a back panel, which keeps the back and top of your head warm. 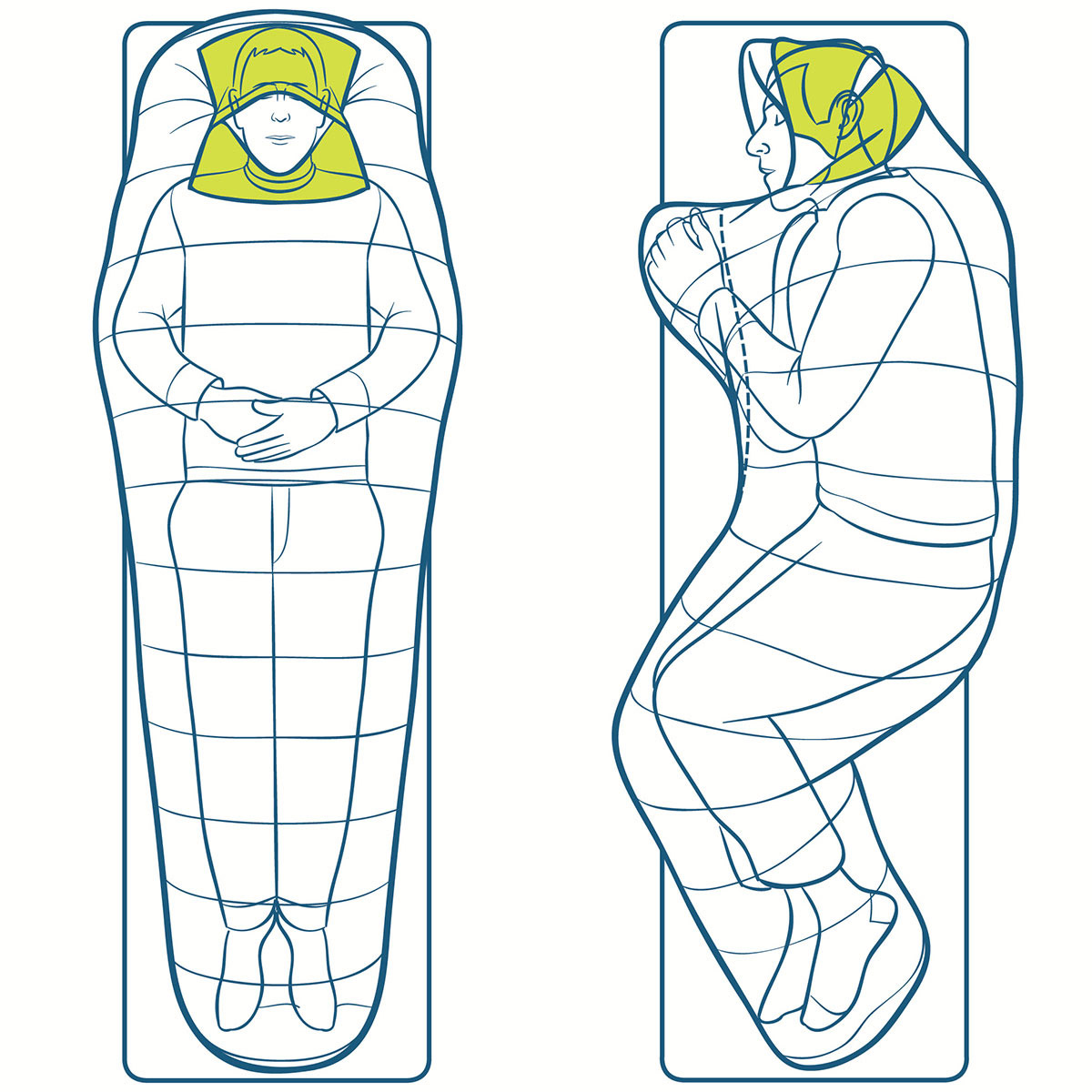 In addition to the hood system, Sierra Designs added two hand pockets onto each corner of the quilt. These are great for both keeping your hands cozy and also keeping everything tucked in (see image above). While this works pretty well for a side sleeper, I did find that on a 30 degree night that this position required the open part of the quilt to be more in front than under me. Since the opening of the quilt really only comes up to knee level, it left some length of material to manage and I found that it was pretty easy to sometimes poke a leg out despite the semi-wide design.

This leads to my one big criticism of the Backcountry 15 quilt, which is draft management. Unlike a mummy bag’s compact design, which makes it easier to shut out cold air, quilts require more precise positioning or attachments to maximize their warmth. Unlike many quilts on the market today, the Sierra Designs line of quilts does not have pad attachment systems or loops to firmly keep the quilt opening sealed and attached to the sleeping pad. 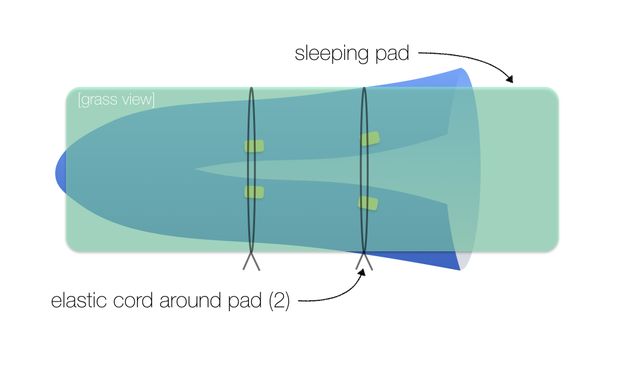 Though not always necessary is warmer temperatures, the ability to completely shut out drafts is important in a quilt system. This is especially true for someone like me, who switches from side to side throughout the night. While it was overall very manageable, there were several times when I had to carefully re-tuck the edges of the quilt around myself throughout the night. Sure, being able to simply roll up in the quilt and retuck will be fine for a lot of three-season conditions, but I’d really like to see a way to attach the quilt to a pad in future versions. 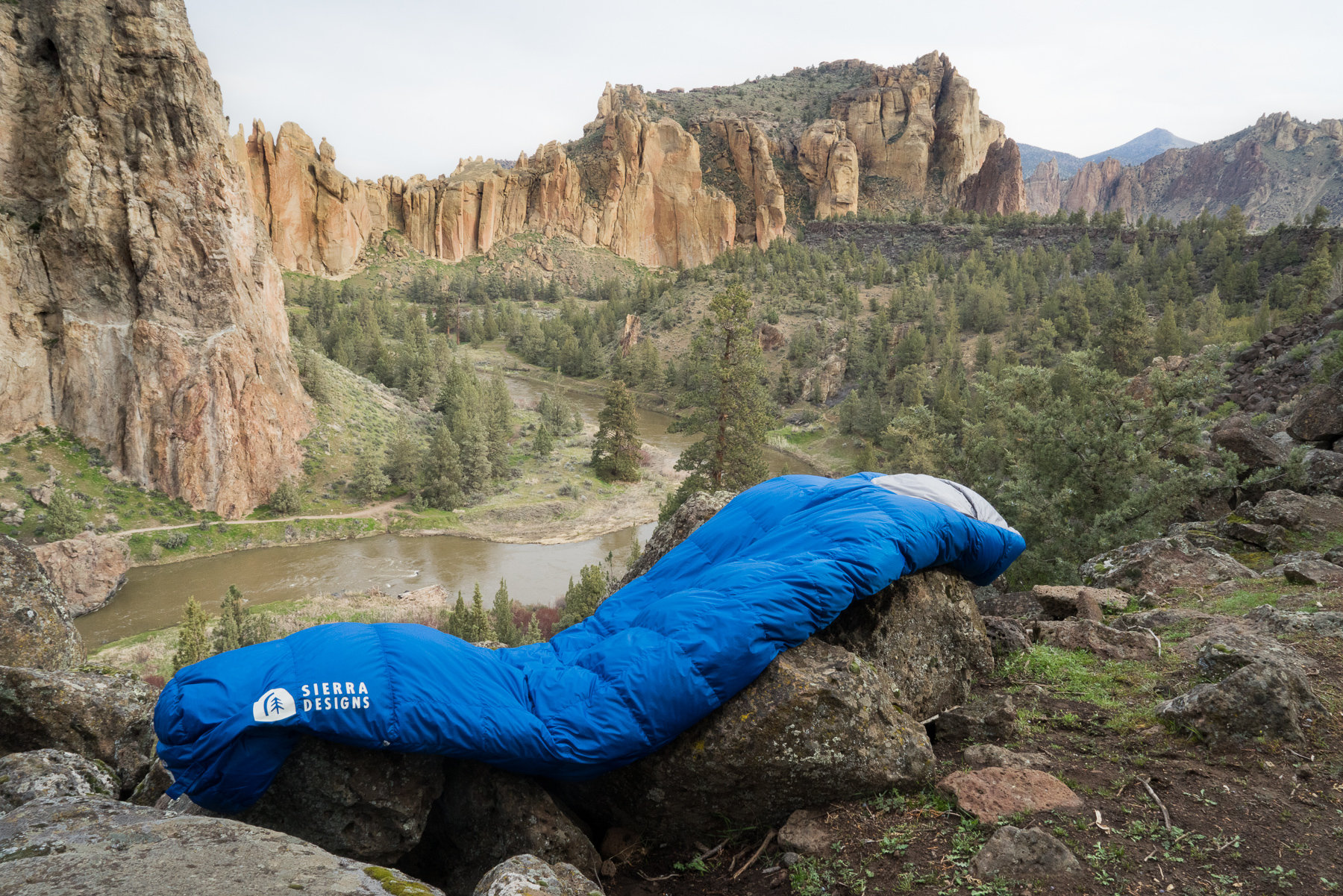 Finally, as a quick critique: at an MSRP of $250 for a 2 lb quilt, the Sierra Designs Backcountry Quilt 15 is likely finding some stiff competition from other smaller cottage brands. A similar or lighter custom-ordered quilt can oftentimes be found at nearby price points. However, many of these require the use of an additional hood in cold weather, whereas the Sierra Designs quilt has the built-in version.

I really like the Backcountry 15 quilt, and would highly suggest it to anyone looking for a summer bag alternative. While it’s called a “15 degree” quilt, I really emphasize the comfort rating of 28 degrees. On a 30 degree night, I barely noticed the outside temperature, but could see draft management getting more troublesome with temperatures well below that rating. I think it would be ideal for individuals looking to enter the world of quilt systems, and those who mostly adventure during summer months when mountain temperatures routinely reach freezing.