Anyone who’s camped or backpacked with me knows one thing: I am not good at camp cooking.

I have been known to carry extra gear to get someone else to cook meals or subsist on granola, various bars, and maybe some freeze-dried meals to avoid having to come up with a backcountry recipe – and now I have another tool in my eating arsenal: the Greenbelly Meal Bar.

A few months ago, the founder of Greenbelly emailed me to ask if I’d be willing to try out some of his homemade Meal Replacement Bars – specifically designed to get you a third of your RDA of calories, carbohydrates, fats, protein, sodium, and fiber – pretty much all the basic stuff you need to keep yourself going on the trail without bonking, getting hungry, or – even worse – getting hangry.

Greenbelly was created by Chris Cage, an Eagle Scout, marathon runner, and Appalachian Trail through-hiker from Georgia. He had the idea for a better, more balanced meal bar and worked with a chef and food scientist to develop these lightweight, no-cook goodies that are preservative free, delicious, and deceptively filling.

The bars come in three different flavors: dark chocolate banana, cranberry almond, and peanut apricot. I had the chance to try all three on some very long fall foliage treks in the Sierra Nevada last year, as well as on some longer hikes here in Southern California.

As far as taste is concerned, these things are great. They have a surprisingly light density – definitely lighter than most energy or meal bars I’ve had – and the flavors are tasty without being overflavored or too sweet. I have a bit of a sweet tooth so I was expecting to like the dark chocolate the best, but I actually loved the peanut apricot. The packages are split into two smaller-sized bars, making it easy to spread out your meal into smaller snacks on a long trip. 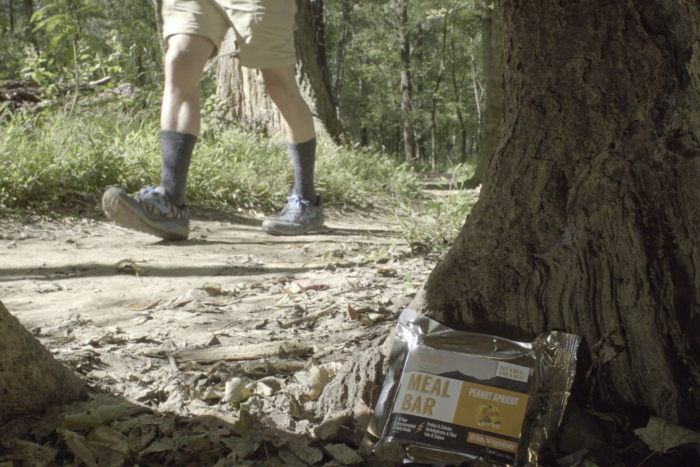 Greenbelly currently donates a portion of their profits to the Leave No Trace Center for Outdoor Ethics, and every time you buy a meal bar from them, they donate a meal to the Atlanta Community Food Bank.

Right now, Greenbelly bars are pretty much made by hand to-order, but they’re looking to expand and automate their production as well as making some new packaging that’s more eco-friendly than their current version. For that, Greenbelly is launching a Kickstarter campaign today. They’re sold out of their initial production run of bars so for the time being, pledging is the only way you can get your hands on some of the bars for yourself. And if that’s not enough, Chris is also offering some fun prizes like shirts, meal boxes, and even a date night!

If you’ve got a few extra bucks, head on over to the Greenbelly Kickstarter page and make a pledge. We wish Chris the best of luck!