Earlier this year, the team at Eagle Creek reached out to me to see if I was interested in trying out a few of their luggage items. As it happened, I was just about ready to start packing for my trip to the OmniGames in Park City and thought it might be nice to try something other than the beat-up duffel bag I’d been rocking since 2008, so I chose two models from their rather extensive line-up, packed them full of gear and clothes, and hopped on the Red Line toward the Union Station Flyaway Bus.

When I was browsing the Eagle Creek web site, I’ll admit I was most intrigued by the concept of the Morphus 22 – a carry-on sized roller bag that also, somehow, can turn into both a roller bag AND a backpack. I wasn’t sure how that would even work, or whether or not there would ever be a use for it – so of course I added that one to the list.

When it arrived, the first thing I noticed was that it looked and felt like a really solid, rugged roller. The front of the bag had a nice “traveler” aesthetic to it and the back was built with a very durable hard plastic – something the web site told me was a “bathtub construction” to prevent water from getting into the bag if it was rolled through a puddle. Of course, I think the plastic looked a lot better with a Modern Hiker sticker attached to it – but I’ll leave those custom design choices up to you. 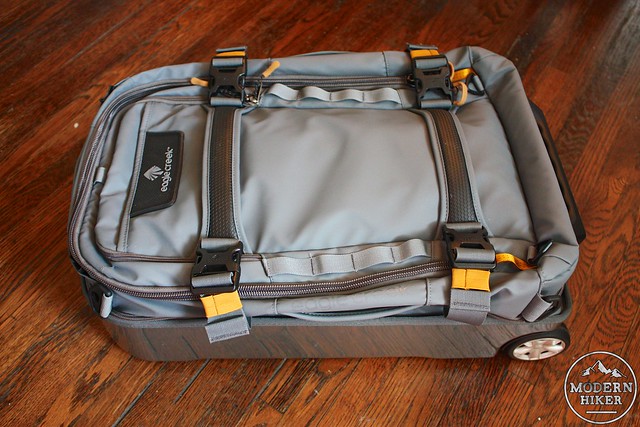 I will say that when I first tried to separate the two bags I had absolutely no idea how to do it – thankfully the Morphus comes with multiple copies of a detailed instruction manual telling you just how, exactly, this whole thing works. 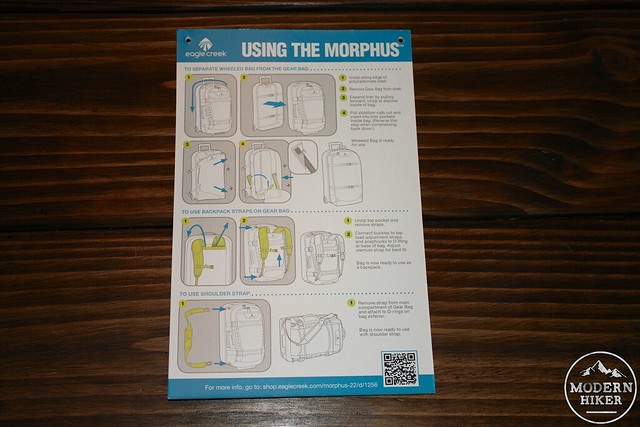 I know it looks like your worst IKEA nightmare, but trust me – it’s not as complicated as it first seems. After a few slow tries with the instructions I was able to separate the bags in under a minute – and I was even able to do it while waiting in line to board my flight after they announced all roller bags would have to be checked (thanks, Boarding Group 4!). 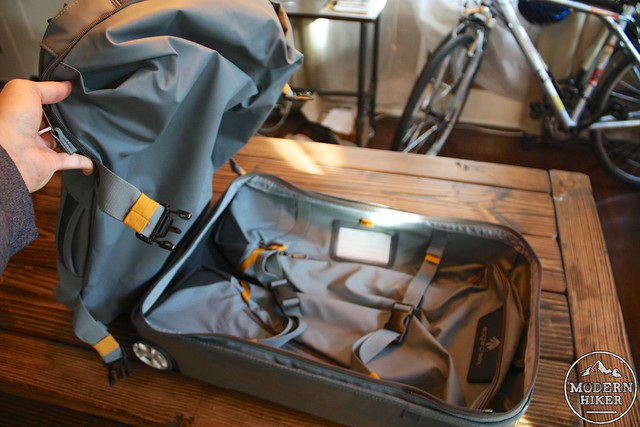 Once separated, the roller bag becomes its own 47L unit – and although its volume is actually slightly smaller than the two bags’ volume when attached, it feels a little roomier just because there’s no cover preventing the bag from expanding outward.

At that point, most of the nicer features are on the backpack section – there are several well-organized sleeves on the interior of the top section and – most importantly – a built-in bottle opener. Because when you’re traveling, you never know when you’re going to need to pop open a nice microbrew. 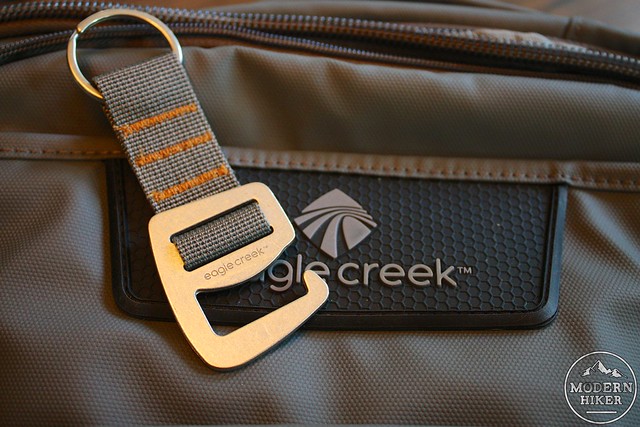 The top section has two hidden straps that you can use to turn it into a backpack – or if you’re more of a messenger-bag type, there’s also a strap you can attach to make it feel more like a briefcase. 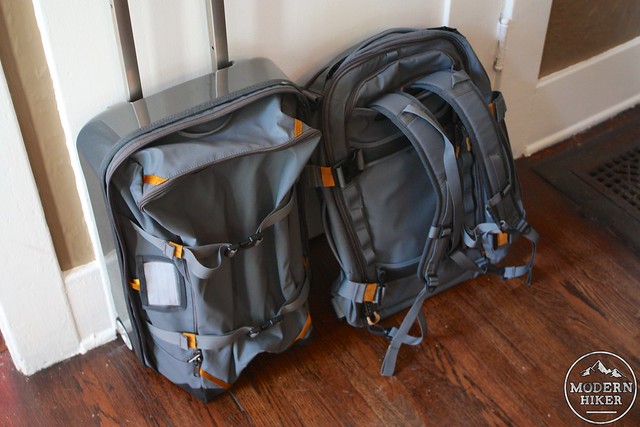 I will say that I had some issues with the bag tilting forward once it was all loaded up, but Eagle Creek has fixed this problem in their current Morphus line.

At just under $400, this bag may seem on the pricey side – but I’m confident its versatility and durability will make up for that in the long run. This obviously wouldn’t make a great backpacking travel pack, but if you want to squeeze in a good hike or walking trip on your next business trip – or just even to have the option of making it through the nightmare of airport security with only one bag, you should check the Morphus out.

And I know what you’re thinking – “Duffel bag, big deal. What can you do with a duffel bag?”

Well, as it turns out, you can do quite a bit. 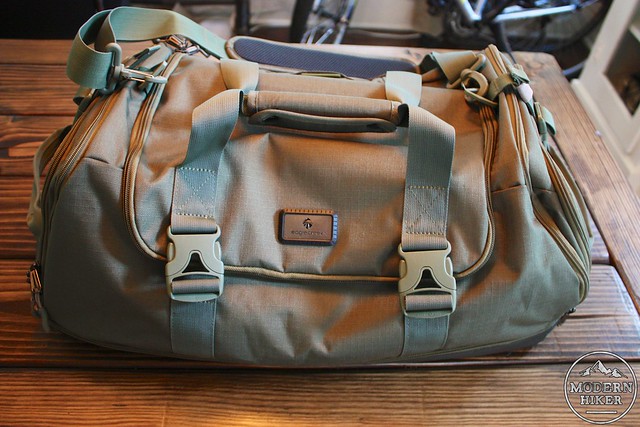 The Expandable Adventure Duffel is a lightweight (2lbs, 4oz) 52L bag with a zippered, latched compartment on either end – one side is a standard organizer pouch AND a pouch that is sized to fit the TSA’s 3-1-1 carry-on rule, which, in my opinion, is so useful that it should be standard on every piece of luggage ever made from here on out. This compartment is separate from the rest of the bag so in case any of your miniature-sized liquids or gels spill, they won’t leak into your clothes. 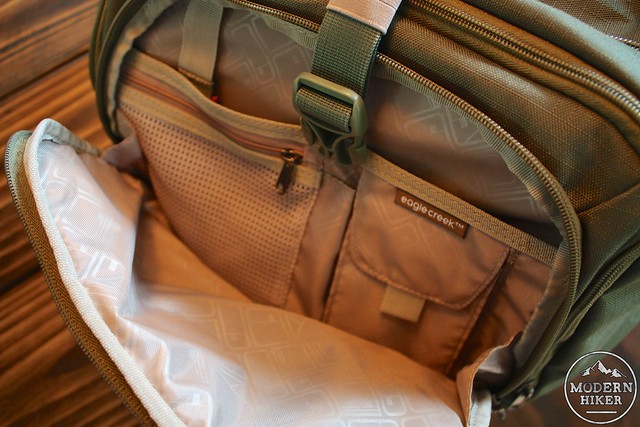 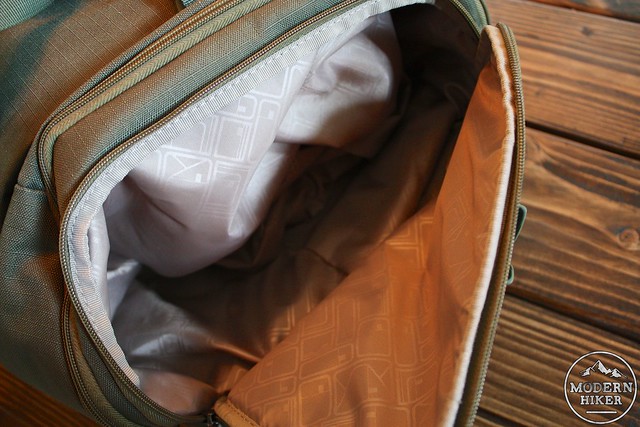 If you find that the duffel is just a little too small for you to fit all your gear into, there’s also a zipper along the bottom of the bag that will expand its capacity to 70L. If you’re carrying this with a roller bag, it’s also got a sleeve on the back so you can slide it onto the top of the roller to carry everything all at once.

At $150, this duffel is definitely more affordable than the Morphus – and you may find you have more uses for it on camping trips and weekend getaways.

All Eagle Creek luggage is covered by their No Matter What Lifetime Warranty, which covers workmanship and material defects as well as repair and replacement due to damage.

Modern Hiker did not receive monetary compensation for this review. Eagle Creek provided these items free of charge but did not influence the the content of the review.