I’ve returned from my Arizona excursion … and have only now just found some time to actually sit down on the ol’ laptop and do a quick update.

Columbia Sportswear flew 9 other outdoor enthusiasts and myself (collectively called the #OmniTen) to Sedona, Arizona to join their press event for a preview of their Spring 2013 technology – unknown to us at the time of our invitations. After we arrived and settled in (and got a nice little stash of Columbia gear to test over the next few days), we were carted out to an outdoor amphitheater for the grand unveiling. The product was called OmniFreeze Zero – a synthetic fabric geared toward hot weather climates. Unlike their existing OmniFreeze Ice technology, which is a chemical treatment that cools the garment, OmniFreeze Zero is a new type of fabric knitting that wicks moisture AND lowers its temperature when wet – either from sweat or water.

So … OK. At this point, you’re asking yourself the same question I was – “Really?”

They handed out small samples of the fabric that fit over our arms, then came around and sprayed the outside of the sleeves with some room temperature water. We all had the same reaction – our arms felt significantly cooler – much more so than you’d feel just by spraying water on your skin.

The fabric was also incredibly soft to the touch and is light and breathable, too. But a sleeve is a sleeve – and we wanted to test out some actual gear in real-world, hot weather conditions.

The next day, the group split up for three different activities – hiking, mountain biking, and yoga on top of one of Sedona’s ‘vortex’ hot spots. Initially I thought about doing the yoga just because I’d be doing a big backpacking trip with the group later, but soon came to my senses and signed up for the intense hike.

And so, at 5AM, the Intense Hiking group met dolled up in identical Columbia gear and hopped into open top jeeps to ride to the trailhead. We headed to the West Fork Trail in the Secret Mountain Wilderness. Initially because we started so early and the trail was at a higher elevation than where we were staying in Sedona, heat was not really an issue … although with scenery like this no one was really going to complain about it not being hot enough: The trail wandered through some amazing red rock canyons before eventually dumping us into a river, forcing us to wade for the final mile or so of the journey. Here, the real stars were the water shoes Columbia handed out to us, but I’ll save that review for another post. It didn’t really heat up too much on the trail but a few of us did start dunking our Trail Dryer hats and Freezer Zero neck gaiters into the water to activate the cooling fabrics. For most of the people on the hiking trip, however, the real benefit of the OmniFreeze Zero didn’t show up until we got back to Sedona for lunch – in the direct, mid-day sun.

Columbia and Mountain Hardwear had a ton of representatives from their product and development teams to answer questions and show off some demonstrations, including a live thermal camera demonstration of the OmniFreeze Zero fabric cooling down under a blast of steam: After this extremely toasty afternoon luncheon, we wandered around Sedona for a bit, which is when I discovered the true joys of the Omni Freeze neck gaiter the team at Columbia gave us – when dunked in a bit of water, this thing not only helped block out the sun, but it also felt like I had an ice pack around my neck.

For me, though, the true test of this new stuff came in the second part of the trip – when we all backpacked down into Havasu Canyon for a few days.

Now, normally people DON’T decide to go backpacking in the Grand Canyon in the middle of June – but Columbia was confident their gear would keep us nice and cool. Combined with the abundant water (at least at the bottom of the canyon), it definitely did.

I was a big gaiter-dunking enthusiast on this portion of the trip – and I’m happy to say it caught on amongst the group. At the very first sign of water on the trail to Havasu Canyon, my gaiter was off my neck and in the river. 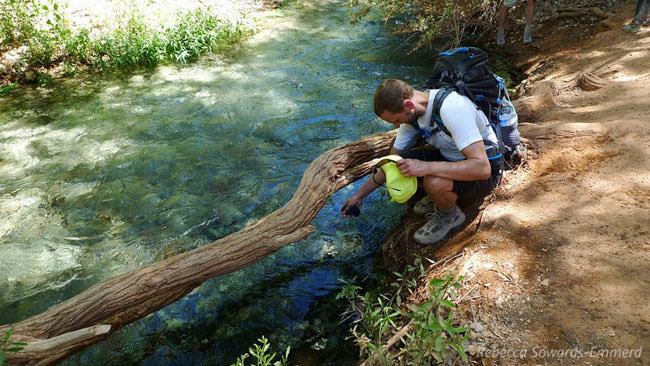 Aside from a few waterfall-jumping excursions, the gear was so comfy almost everyone kept it on all the time – even when swimming in the river or the pools formed by travertine dams. I took a Freeze Dregree shirt and the Freezer Zero gaiter with me on a “cascade tour” of the ‘New Navajo Falls’ (all of the waterfalls in the canyon were heavily altered by a flood in 2008). We went behind the cascades, then onto the hurricane deck, into a warm travertine pool called The Paradise Pool, then into the large lagoon. After a good deal of swimming and jumping, I emerged soaked … and kind of cold. Even in 95 degree heat and full sun. And hey – if the gear wasn’t great enough, it also dries out pretty quickly, too!

Even when we weren’t submerged in water, all of the OmniFreeze gear we tested worked flawlessly. Unlike other synthetic wicking layers, I never felt clammy or waterlogged with sweat. The OmniFreeze zero is very breathable, has sun-protective qualities, and just feels great on the skin – it’s hard to describe, almost like a well-worn cotton-poly tee shirt.

It is a synthetic fabric, so unlike a merino wool layer it’s gonna start smelling if you really put it through the ringer without washing it. I usually hike in a loose synthetic or IceBreaker tank top (I’m always fighting a losing battle against farmers’ tan), but I am definitely going to introduce some of these OmniFreeze Zero items into my usual hiking wardrobes … and pick up some more items when the line launches in Spring next year.

– OmniFreeze Zero is a new fabric that will replace OmniFreeze Ice in functionality
– the lightweight, breathable fabric both wicks sweat effectively AND literally cools down when in contact with liquid – the temperature of the garment will actually drop
– everything I tested with OmniFreeze Zero also dried pretty quickly when submerged in water
– I tested the fabric in the Freeze Degree short sleeve ($60), the UPF-40 Trail Dryer Hat ($34) and the Freezer Zero neck gaiter ($30). Everyone on the trip was pretty unanimous that the gaiter was our favorite item – and most of us NEVER use them otherwise
– Line releases in Spring 2013, and will include additional garments (underwear!)

There is SO much to process and write about this trip – I’ll hopefully have more reviews of some of the other Columbia gear, as well as just a narrative of the trip to share, too.

For some of the other Sedona activities, check out Just a Colorado Gal’s mountain bike adventures, and Banana Buzzbomb and The Morning Fresh’s vortex yoga times.