My former backpacking pack was an Osprey Atmos 50, a well-worn bright red model with an awesome mesh ventilated back. It has served me well over the years, but now that I’ve started backpacking in places that need bear canisters, I’m pretty much out of room with that guy. In light of my upcoming Mount Whitney trip (at the end of August! Almost here!), I decided to head to REI again to refresh my back-buddy.

Much has changed since the last time I picked out a big pack on my own – the mesh backframes all appear to be gone in favor of extra padding and pre-formed hip belts, sleeping bags have their own accessible pouches now, and everything seems to have gotten stronger and lighter along the way.

As a brand loyalist, initially I was drawn to the Osprey Aether 70, but for whatever reason, Osprey decided to put all the increased volume at the top of these bags. As a result, if you were hiking and decided you wanted to lean your head back for any reason, you’d immediately hit the top of the pack — not to mention that your peripheral vision is impaired. So I passed on that and instead tested out the Gregory Baltoro 70.

The Baltoro felt incredibly snug on my hips, and seemed to have extra padding just about everywhere you could want it — and as a bonus, I could lean my head back without hitting the top. So I laid down my credit card and took the pack home.

Over the weekend, I hit the Echo Mountain Trail with all of my usual camping gear packed inside, including a new Exped Synmat 9 mat, which is bulkier and heavier than the ThermaRest I used to use. After stuffing all my gear inside, including the stuff I usually have to attach to the exterior, I still had room left over. In fact, I had so much room left that I filled the rest of the pack with water bottles wrapped in clothes just to add more weight. 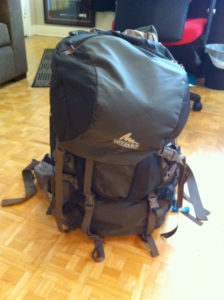 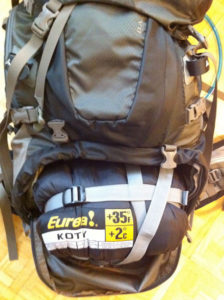 On the trail, the pack distributed that weight so well that I barely even noticed the 35 pounds. While I missed the mesh back of the Atmos, the TONS of padding on the Baltoro more than made up for it — the shoulders and hips have an ample amount of very comfortable padding on them, and the back is even better. 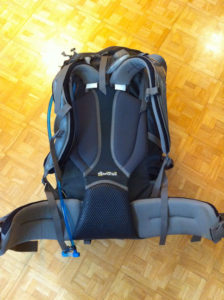 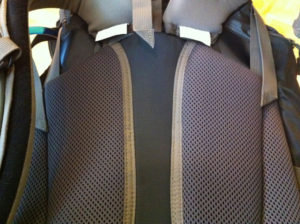 The lumbar area has an small pad that bulges out a bit from the rest of the pack. Not only does it feel great, but it also helps to spur you into good hiking posture while you’re on the move. 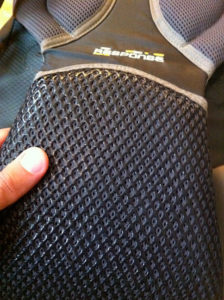 the lumbar pad - a little pillow for your back

The cost of all this padding comes in the weight of the pack, which tips the scales at 5 pounds, 9 ounces for a Medium. But honestly, you’ll probably be too comfortable to notice.

From someone coming from a one-access point pack, the Baltoro offers much more. You can access the interior from the top of the back, on the bottom through the sleeping bag compartment, and even in the center via a zip-away window. If you know where your gear is, you can very easily get to any corner of the pack in an instant – helpful when that one piece of gear you need right now just happens to be buried beneath the sleeping bag.

Overall, I’m very impressed with the design of the Baltoro 70 so far, and I can’t wait to get this thing on the Whitney Trail later this month.

Anyone else out there a pack loyalist? What packs have treated you the best over the years?