I had a chance to attend a screening of the new film adaptation of Cheryl Strayed’s popular Pacific Crest Trail memoir Wild last week along with a Q&A with star and producer Reese Witherspoon and producer Bruna Papandrea. Hikers and fans of the book have been excited about the prospect of a film version of Cheryl Strayed’s best-selling memoir and I’m happy to report that the film is a beautifully shot, wonderfully acted piece that not only gives us a complex and realistic female lead (a sad rarity in Hollywood), but also does an incredible job of capturing the experience of spending too much time with yourself on the trail and portraying the wilderness as a majestic but indifferent – and definitely unglamorous – entity. 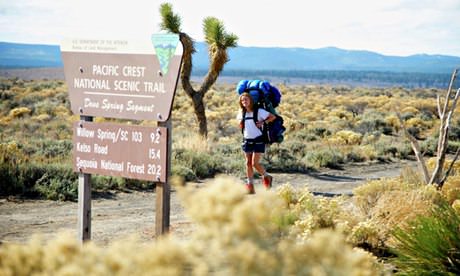 Cheryl and “The Monster”

For those who don’t know, Wild is less a story about nature or hiking or even the Pacific Crest Trail itself than it is a memoir of loss, addiction, escape, and searching. If you go into this movie expecting hiker antics and nature-porn scenery, you’re likely to be disappointed (Strayed hiked solo and had to skip most of the picturesque Sierra Nevada due to an unusually robust snowfall). Most of the first part of the film is spent in what many hikers consider the least beautiful and most boring section of the trail, although the vistas do pick up a bit once she reaches Northern California and Oregon.

This is not to say that hikers won’t enjoy the scenery. Desert landscapes are wide and epic while Oregon’s moss and pine-flanked trails peer beautifully through foggy mist. You’ll also have a lot of “Oh, I’ve been there” moments. Strayed starts her hike in the Mojave, unprepared, untrained, and woefully overpacked. Her attempts to strap on a 60+ pound pack in her motel room are both very entertaining and very familiar to anyone who can remember the first time they went on a backpacking trip (and yes, the backpack really was heavy – Witherspoon said director Jean-Marc Vallée insisted on making her haul the full pack weight herself). You’ll also probably identify with Cheryl’s obsession with Snapple lemonades along the way – we all have that Dream Meal that floats around in our heads as we’re hiking back to the car.

There is a bit of product in the film – along with the Snapple, REI’s customer service is a prominent Trail Angel and Portland’s Danner even revived production on Cheryl’s Mountain Light Cascade boots for the film – but the producers assured us they were all for authenticity and none of the companies paid for placement (at one point, Strayed herself insisted they re-record dialogue so her character would specifically order a Snapple lemonade).

A film tackling a story that’s mostly about one woman’s internal monologue while hiking has more than its fair share of storytelling hurdles to clear – but Wild rises to the challenge beautifully. If you’re a solo hiker, you’ve probably had the strange “walking meditation” experience of taking a back seat as your mind pulls up old memories, works on problems, or cycles through your entire iTunes library. These scenes play out quite nicely in Wild, with the audience seeing flashes of Cheryl’s troubled past and her heartbreaking relationship with her mother (brilliantly realized by Laura Dern). The flashbacks are often presented piecemeal or in seemingly random fragments and even bleed into Cheryl’s reality at times and Nick Hornby’s script does an excellent job tying the different timelines together. The effect is slightly surreal and almost hallucinatory at times and in addition to being an accurate portrayal of “Trail Mind,” it also moves the story forward at a quick pace and condenses some of the more introspective, personal moments of the book to lengths that are more digestible for a film audience.

Witherspoon’s performance is excellent – and many other reviewers are comparing it to her Oscar-winning turn as June Cash in Walk the Line. Her Cheryl is an imperfect, totally human character who’s a complete joy to watch whether she’s muttering curses to herself on the trail, throwing boots off a cliff in frustration, or chugging lemonade in ecstasy at a general store.