Our Favorite Outdoor Books of 2017

So it’s about the tail end of 2017, and everyone’s been posting their gear roundups and stocking stuffers for the holiday season. While I think that’s fun – and let’s be honest, who doesn’t love a new piece of gear – instead I wanted to take some time to highlight some of my favorite outdoor books I’ve read this year.

Now, most of these books didn’t come out this year — but they’ve all in some way helped me to better understand Southern California and the American West, current and ongoing issues with public lands, and yes — also get inspired to get back out on the trails.

See also: our favorite outdoor guidebooks from this year.

Seasons in the Desert: A Naturalist’s Notebook 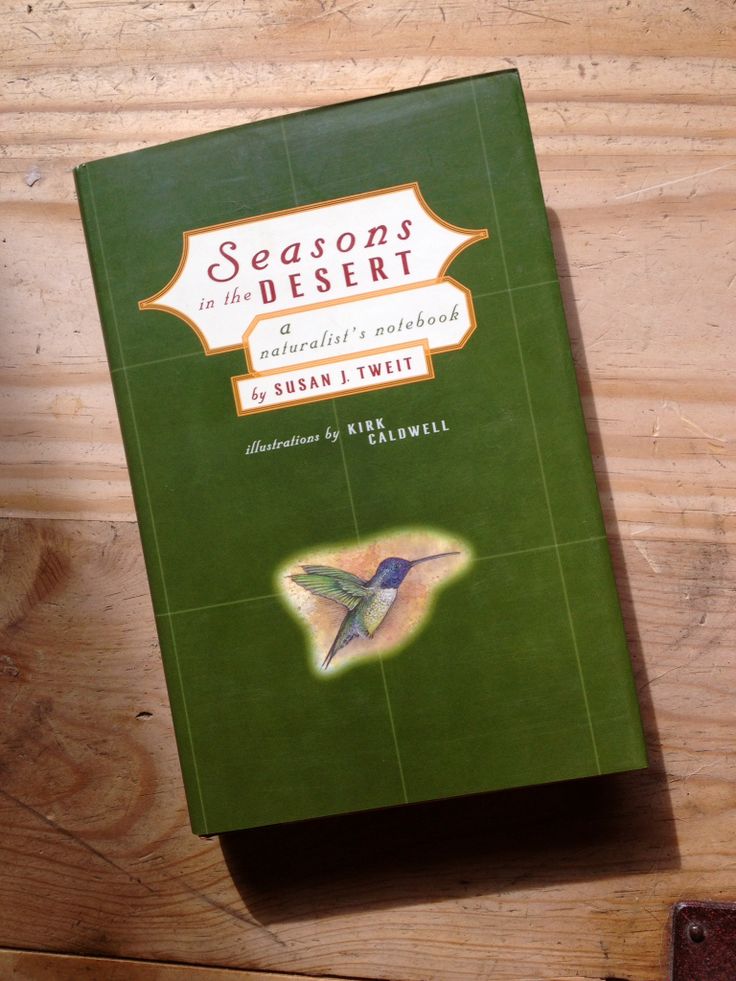 In my mind, there are two types of people in this world — people who ‘get’ the desert, and people who don’t.

When I moved from New England to Southern California almost 15 years ago, I had the popular image of the desert in my mind as an empty, barren place — devoid of life and unworthy of interest. Of course, all it took was one quick trip into Joshua Tree to toss that idea out the window as quickly as possible.

Tweit’s book can be considered a primer for people who are just learning about these wonderful arid places and all the life and wonder they hold. It’s divided into the four seasons, with each season highlighting active species of plants and animals during those seasons — so in Spring she writes about blooming Joshua Trees and Saguaros; Summer has ocotillos and fairy shrimp; Autumn the cottonwood and desert bighorn sheep, etc. Focusing on the Mojave, Sonoran, Chihuahuan, and Great Basin deserts, each short entry gives a bit of scientific background but Tweit spends much more time on really getting to know each species. Sometimes it’s through literature, sometimes native folklore, and sometimes through family stories. Each entry will leave you wanting to learn more about these environments, and Caldwell’s expressive illustrations will likely have you shouting, “oh, that’s what that was!”

Encounters with the Archdruid 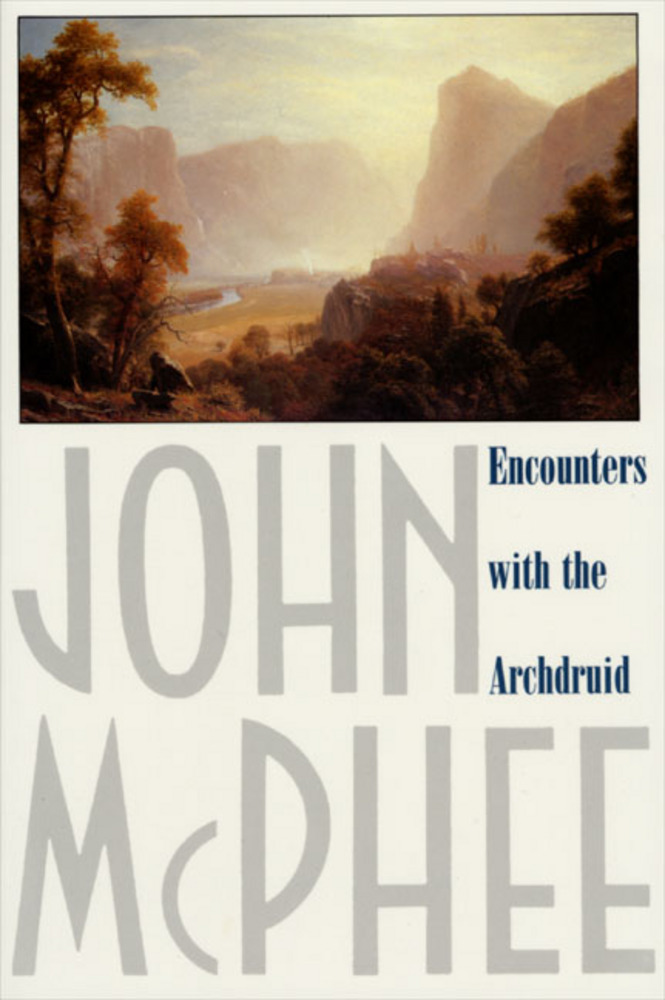 A few years ago, a friend of mine sent me a note that basically said, “I can’t believe you haven’t read anything by John McPhee yet.” His recommendation was “The Control of Nature,” an incredible and fascinating story of humanity’s vain attempts to reshape the natural world — with one large focus on the check-dams and channelized rivers so common here in Southern California.

I loved that book so much that I snatched up “Assembling California” – a book that focused on the strange geologic makeup of the Golden State – but I found that one a bit too dense for my tastes. Luckily, “Archdruid” is one of the great ones.

In “Archdruid,” McPhee follows the legendary (and some would say ‘extreme’) conservationist David Brower on outdoor adventures with three figures who would seem diametrically opposed to him. They backpack with the mineral engineer Charles Park, who thinks the fate of humanity rests upon its ability to extract resources from the ground — even if they’re near wilderness areas. They take an island tour with developer Charles Fraser, who famously turned South Carolina’s Hilton Head into a world class resort. They raft the Colorado River with Bureau of Reclamation Commissioner Floyd Dominy, the driving force behind Glen Canyon Dam and hundreds of other dams in the West. Throughout, there are arguments, bickering, jokes, and solid points made by all — all written as if you were eavesdropping on a series of philosophically-minded outdoor adventures.

You might think you know who you’re going to agree with the most when you start reading this, but through each section’s narratives, you’ll lose track of how many times you switch sides on each argument.

On Trails: An Exploration 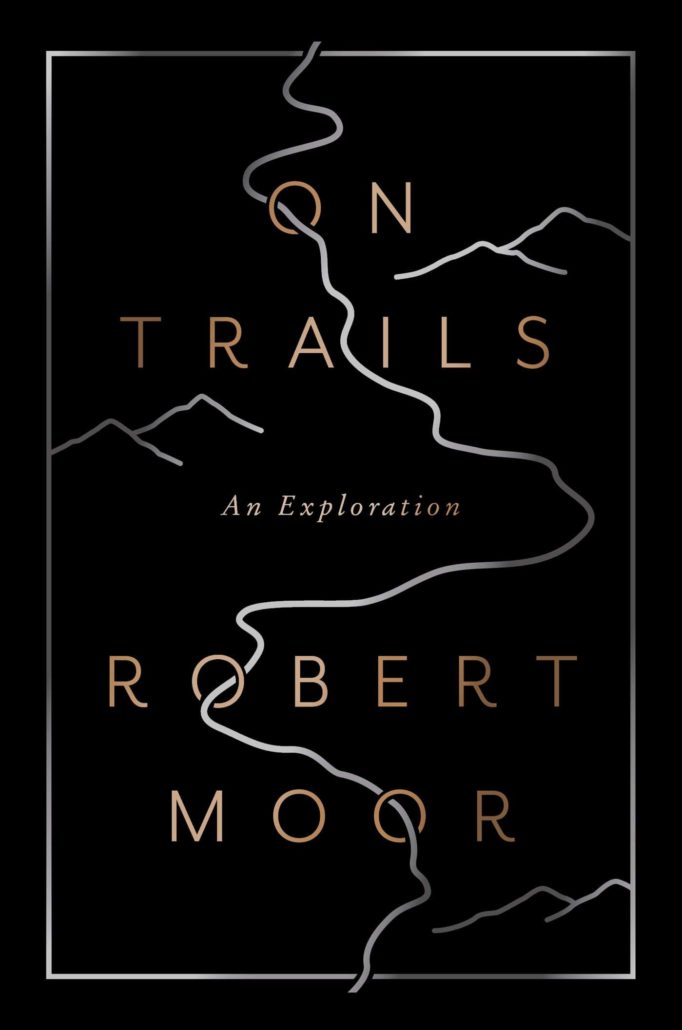 You know how sometimes when you’re hiking for a long time, your mind just kind of starts to wander around in strange places? That’s what happened to Robert Moor. In 2009, he thru-hiked the Appalachian Trail, and the question that kept popping into Moor’s head was “But what is a trail, really?”

“On Trails” is his attempt to figure that out, and it’s roughly structured around following the very history of trails themselves — from the fossilized paths left by the first single-celled organisms who could propel themselves to the game trails of migrating animal herds, trade networks of Native American tribes, modern interstate highway systems, and attempts to extend the International Appalachian Trail across the Atlantic Ocean.

Throughout, Moor investigates what a trail’s purpose is in the first place, and what those trails might mean to different people (and animals) at different times. It can get a little heady sometimes, but I was totally charmed and surprised by this book, and my own copy has several dozen dog-earred pages. If you consider yourself a walking meditator, you need to put this on your shelf right now.

A Field Guide to Getting Lost 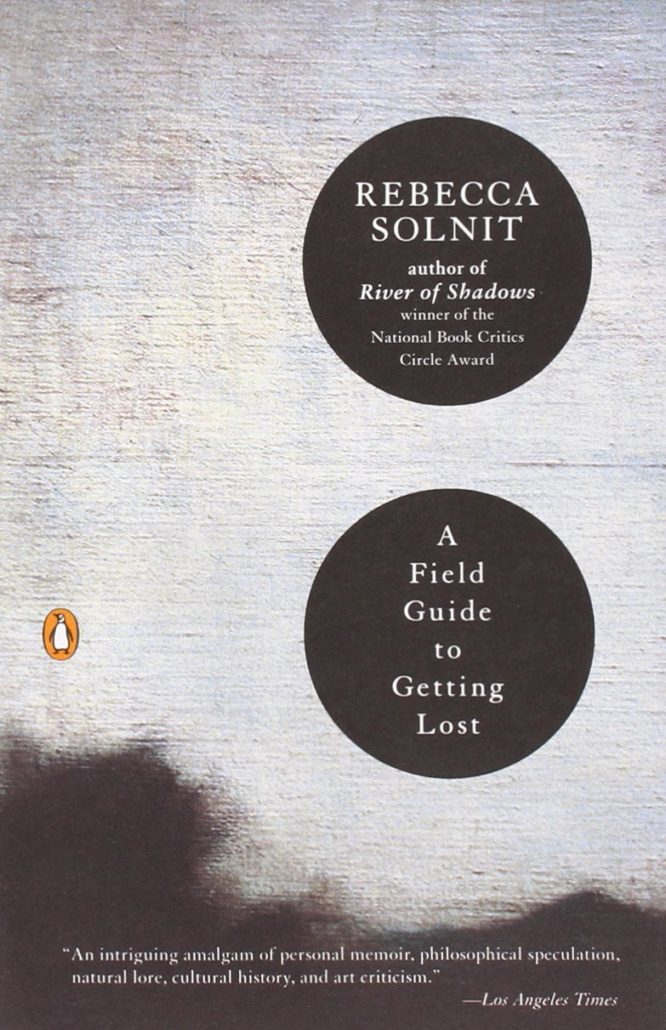 Speaking of wandering minds while hiking, reading “A Field Guide to Getting Lost” is almost exactly like that experience. This is kind of not exactly an outdoor book, but so many of the meditations in here are based in geography and cartography that I think it’s worthy of inclusion.

The subjects here range and wander – the explorations of Cabeza de Vaca through the southwest are here. Mix tapes themed around the color blue and hints of travel are here. A Buddhist sermon is here. Her father’s master plan for Marin County is here. Painters are here. A love affair is compared to desert ecosystems. Anglo settlers are raised in Native homes and wander between worlds. The assembled essays bounce off and weave into each other in a way that gets under your skin and wraps around your synapses. You’ll find yourself finishing a chapter, cracking a smile, and just mouthing the word “wow” to no one in particular.

For reasons I’m not yet entirely 100% aware of, while I was reading this I thought this was a perfect counterpart to another one of my favorite books — Edward Abbey’s “Desert Solitaire.” They’re not really that close in theme, and certainly not in tone — but both have now moved onto that rare place on my bookshelf: the Required Repeat Reading section. 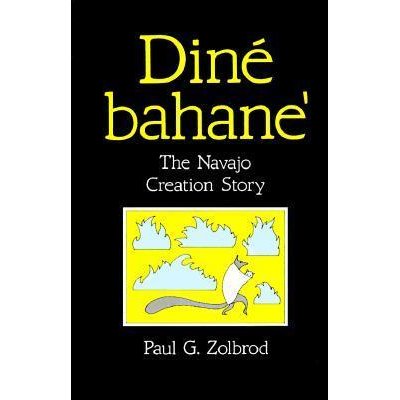 Like many travelers to the Colorado Plateau, I became fascinated with the history of the Ancestral Puebloans and their descendents. And yeah, you can read a lot of histories and biographies, but if you really want to get into what makes a culture tick, you have to look at their stories.

The issue with the Navajo Creation Myth (and, let’s be honest, with most native stories) is that they’ve always been presented to a Western audience through a Euro-centric lens. The first section of Zobrod’s 1984 translation is all about the difficulties in translating an animated oral story — really more of a performance — into tidy sentences and paragraphs on the printed page. No matter how hard you try, you’re going to lose so much of the original source material that no matter how good your intentions, you may end up doing more harm than good.

Zobrod spent years with tribal elders listening to their stories, and painstakingly translated them onto the page in what looks more like poetry than prose. Lines are broken in unusual places, phrases are rhymed, and there’s a lot of repetition. Some sections of this are — to be honest — not that easy to get through, but patient readers will be rewarded when they can hear the voices and rhythms in their heads while learning how the Navajo see themselves, their neighbors, and their homeland. If you’ve spent time in the region, you’ll recognize many of the landscapes that play such a central role in their creation myth, and maybe you’ll gain a greater appreciation for the reason places like Bears’ Ears are so important to that region’s tribes today.

Beyond the Hundredth Meridian 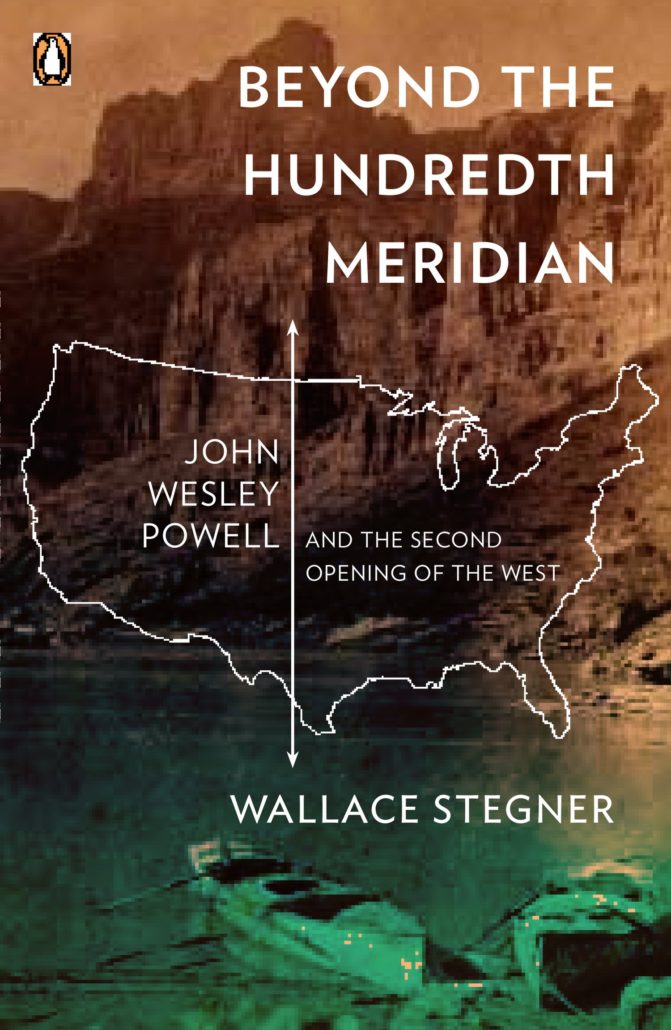 If you haven’t heard of John Wesley Powell and you love the landscape of the West, you need to stop what you’re doing right now and pick up this book. Powell was one of those 19th Century self-taught American Renaissance Men, someone who just soaked up knowledge from anywhere he could and spat out incredibly forward-thinking ideas that — unfortunately — went mostly ignored.

Stegner’s biography follows Powell as he puts together a ragtag group of what we today might generously call ‘citizen scientists’ to be the first people to navigate the Colorado River on boat — one of the last places in the Lower 48 to be mapped. Powell’s makeshift boats,  homespun science, and unusually progressive attitudes toward the Native American tribes in the region led him to become the nation’s foremost expert on the American West, and eventually into the hallowed halls of Washington, D.C. There, he had the chance to help guide policymakers who — for the most part — had never been west of the Appalachian Mountains.

Powell fought in vain to convince politicians that the agricultural and urban policies that worked on the East Coast would not work west of the 100th meridian, where the landscape became so arid that most people at the time referred to everything between Kansas and San Francisco as the Great American Desert. Hikers will enjoy the depictions of the pre-development Colorado Plateau and adventure stories, while Western history buffs and outdoor policy wonks will wish more people listened to Powell. 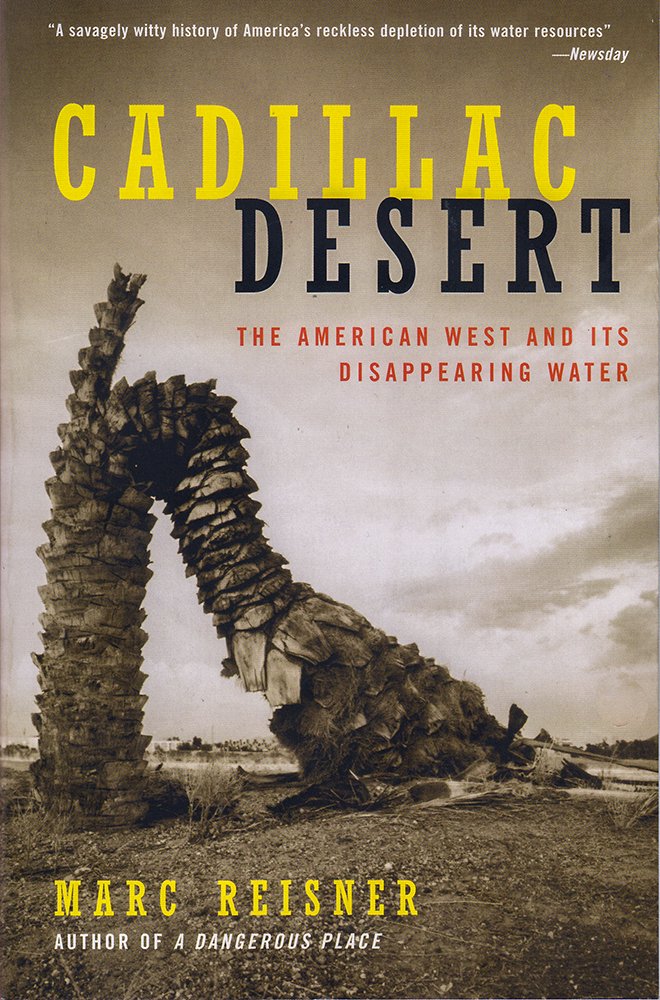 So … did we listen to the ideas Powell suggested, which included sensible development and political boundaries based on watersheds to limit conflict?

Enter “Cadillac Desert,” which almost picks up exactly where “Beyond the Hundredth Meridian” leaves off. People have been telling me to read this book for years, and I finally got around to starting it in late 2017 (full disclosure: I’m still reading it). Let me tell you — everyone who told me to read this book was right. It’s a history of water politics, of land-use politics, of urban growth, of massive government subsidies doled out for political favors, of Western myths and legends — and it’s all so engagingly and entertainingly written that even people who might fall asleep at the mere thought of reading a history of water policies will be ravenously turning each page looking for more humor and scandal.

You’ll learn about L.A.’s water wars, the great damming “go-go years,” the birth of the myth of the Western rancher, and the full-on renovation and remaking of existing rivers — most done for personal or political gain, and not necessarily because they made sense.

One of the things that struck me most while reading this was the subversion of some of our more well-known Western cultural myths. The self-reliant Western rancher or cattle grazer has long been a mainstay of Western culture — that loner cowboy on the high desert plain who asks nothing and doesn’t want to be bothered by outside forces — is really only even able to exist because of massively subsidized federal irrigation projects that American taxpayers lost money on as a whole.

Amidst grift, graft, and pork, America kept pouring more and more people into a region it had to overengineer to support them. Reisner died in 2000 and the last edition of the book was in 1993. Although some places in the West are becoming smarter with their resource use, will we still be able to live here if the climate continues to get hotter and drier? We’ll have to wait and see.

What have you read and enjoyed this year? What should we add to our 2018 list or look forward to? Let us know in the comments, and be sure to check out our roundup of favorite outdoor guidebooks from this year, too!