It’s no secret that we hikers tend to love our local microbrews, but for L.A. hikers who were looking for local beers actually brewed inside Los Angeles, pickings have been slim for a while. Now, a bonafide Los Angeles brewery is about to unveil a beer inspired by the San Gabriel Mountains — and it’s benefiting the National Forest Foundation, too.

Eagle Rock Brewery opened in the Glassell Park neighborhood in 2009, and was one of the first breweries in decades to operate inside city lines. A few years later, I worked a grueling late night TV job just around the corner, where my lunch just happened to coincide with their taproom opening hours, so I got to know many of their brews very, very well.

In addition to brewing solid beers with fantastic accompanying artwork, the brewers at Eagle Rock are also avid hikers and outdoorsfolk.

Last year, the brewery debuted “2 North,” which is the freeway and direction you can take almost directly from the taproom’s front door to dive deep into the San Gabriel Mountains. This year, 2 North is back, along with three other outdoor-and-travel inspired beers that they’re calling their Daytrip Series — a session IPA called Mosaic Canyon (named after the canyon in Death Valley) was released in late March. The new brown ale 2 North arrives in May, the Mount Whitney-gazing Summit Seeker IPA comes to shelves in July, and the Salvation Mountain gose will be here in August. 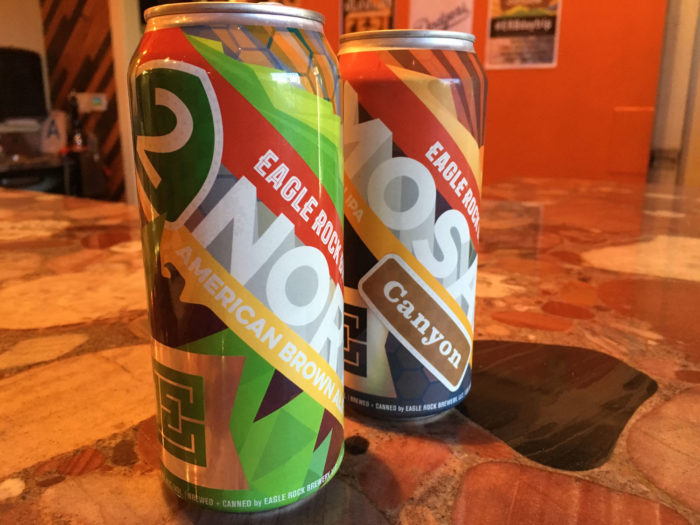 Brewmaster Erick Garcia told me the idea for outdoor-inspired beers came to him on the way back from a trip to the Grand Canyon, and using the 2 and the San Gabriel Mountains seemed like a no-brainer for a first crack.

The beer is brewed with water blended from LA’s various water sources, and according to Garcia, the type of water we have is naturally good for brown ales and porters. The hops used in 2 North are reminiscent of the conifers found in the higher San Gabriels — and even better, a portion of proceeds from the sale of 2 North goes to help the National Forest Foundation.

The 2 North cans come hot off the press (canning machine?) on Saturday, May 13th — and Eagle Rock is celebrating with Modern Hiker!

Join us at the trailhead to Josephine Peak at 9:30AM (or carpool from the taproom at 9AM) — we’ll hike up Josephine’s relatively moderate fire road, sample some of the beer along the way, and flood social media with the best dang hiking beer photos ever taken.

After the hike, we’ll truck back down to the Eagle Rock Brewery Taproom where we’ll celebrate the new beer with a hearty post-hike toast. The taproom will have some food trucks parked outside for extra calorie replenishment, and if you show your Instagram photo with the hashtags #ERBDaytrip and #modernhiker, Eagle Rock will give you $1 off your next pint and a free beer coozy, and if you haven’t already picked up your copy yet, I’ll give you 10% off a signed copy of  my book “Day Hiking Los Angeles!”

Mark your calendars and sign up for the event on our Facebook Event page for updates — it’s gonna be a fun one!

9AM Eagle Rock Taproom at the or 9:30AM at the Josephine Peak trailhead

1PM (ish) Back at the Taproom for the release of 2 North, food trucks, book-signings, great beers, and all-around general merriment