Most travelers on the 10 east of Indio probably don’t notice much of their surroundings while they’re on the road. Heading east or west at 80 miles an hour (maybe 75 when California Highway Patrol is visible), sand and hills rocket past as the irregularly spaced off-ramps become rarer. Maybe you notice the blackened husks of old, dead palm trees near long-abandoned roadside businesses and resorts near Desert Center or wonder why there’s a museum to General George S. Patton in the middle of nowhere, but otherwise you’re just focused on getting to your destination.

[pullquote]When you’re content to simply drive through or fly over the deserts, you’re apt to assume they’re of little value[/pullquote]

To enjoy and appreciate the desert, you really have to slow yourself down. In today’s push-notification filled, weekend-workday existence that can be easier said than done, but in the desert things work on their own timeline. It’s definitely not one that’s catered to humans – some of the nondescript creosote bushes you’re passing may have taken seed when the first Mesolithic cave drawings were being etched onto rock walls.

When you’re content to simply drive through or fly over the deserts, you’re apt to assume they’re of little value – empty, useless spaces that should be ignored or “improved,” maybe by filling an old mine on the border of Joshua Tree National Park with a landfill for Los Angeles residents or by building a solar plant atop a National Historic Trail in an enclave of otherwise protected land.

Sometimes those projects are boneheaded, other times they’re well-intentioned. The Bureau of Land Management, which oversees much of the federal land in California’s desert, has to serve many masters. Unlike the Park Service with its clear mission to preserve landscapes and provide recreation, the BLM runs campsites, trails, off road areas, National Monuments and Wildernesses, and leases land to private industry for the exploitation of resources. The agency is also under pressure to produce 20,000 megawatts of renewable energy for the federal government by 2020, and so the desert often looks like a good option to develop. When climate change threatens every square inch of space on the planet, can’t we give up a few desert acres here and there to generate some clean power?

It’s a complex question and one that there is no “right” answer to – but groups like The Wilderness Society are encouraging people to see what’s actually in the desert before it’s irrevocably altered by development. The more people they can get to put their boots on the ground out here, the easier it will be to motivate people to keep clean energy off the most fragile and unique parts of the desert and instead help the BLM find less controversial sites.

We were lucky enough to be visiting the region just after a much-needed winter storm, and the first thing many remarked on was just how green the landscape seemed – not a description you would normally use with a desert environment. Creosote bushes were expansive and brittlebushes took the winter storm as a chance to shoot up another round of flowers. 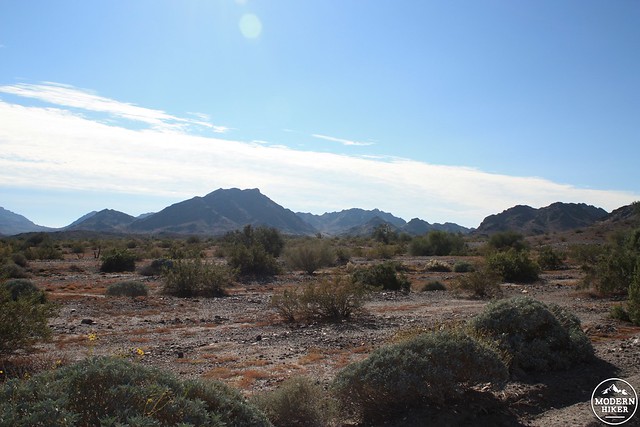 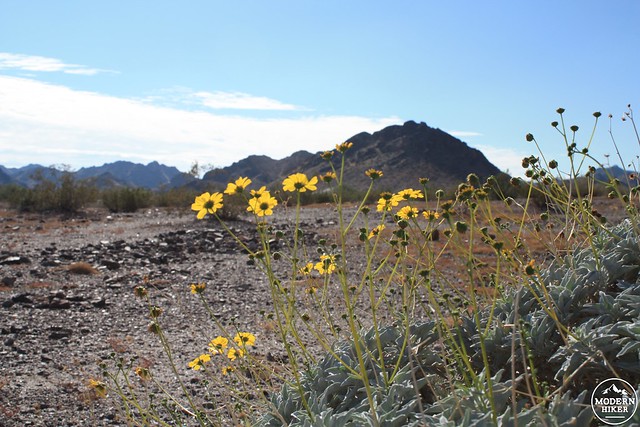 Ironwood trees lined a deep wash that seemed to also form a boundary for ocotillo cacti. A large desert lavender shrub was hiding out in the shade, providing a great scent that I wasn’t used to smelling in the desert … and all along the way, we passed inconspicuous rocks that when split open revealed a dazzling quartz core. 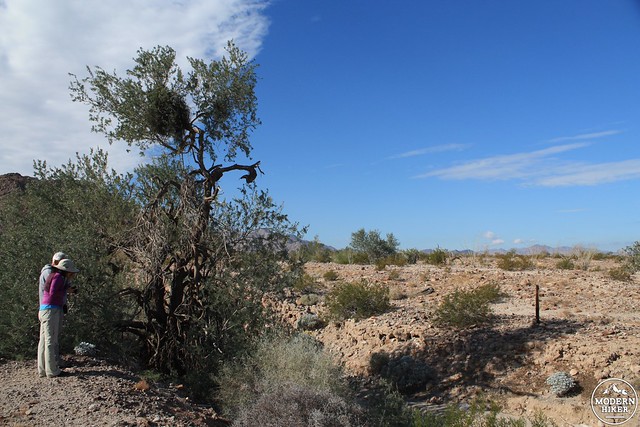 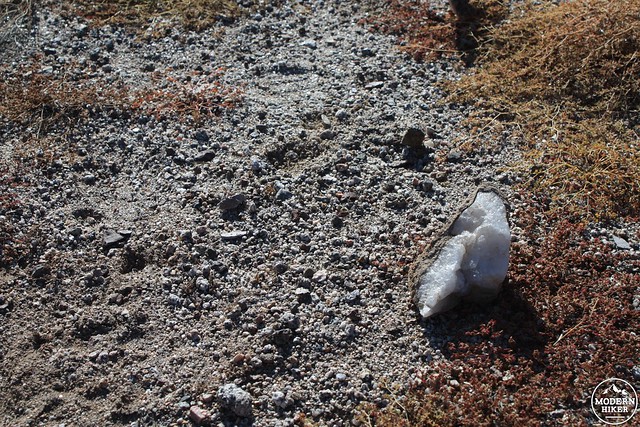 This wide open expanse, home to the endangered desert tortoise, may soon be home to part of the Graham Pass Wind Farm, whose initial application with the Bureau of Land Management asked for 40 square miles of windmills along with the necessary roads and infrastructure. 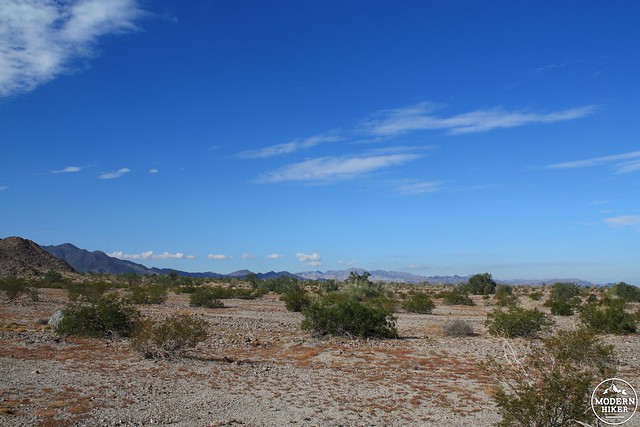 As we drove through the narrows of Graham Pass we could clearly see the different geologic forces at work in the desert – to our right, the uplifted Chuckwalla Mountains rose sharply above us. To our left, the lower, darker Little Chuckwallas were born more recently from magma seeping up through the stretched mantle. The geology was striking; the timeline humbling. 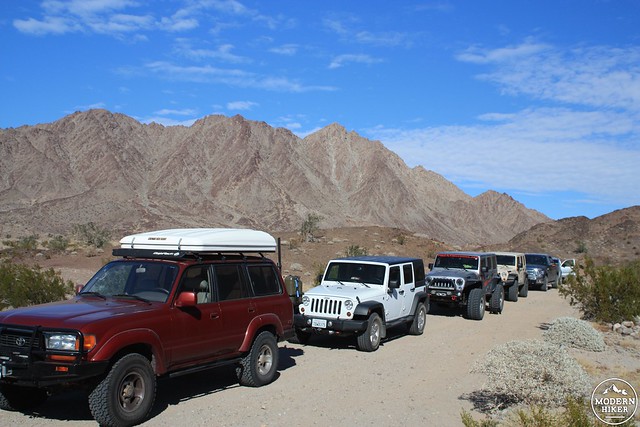 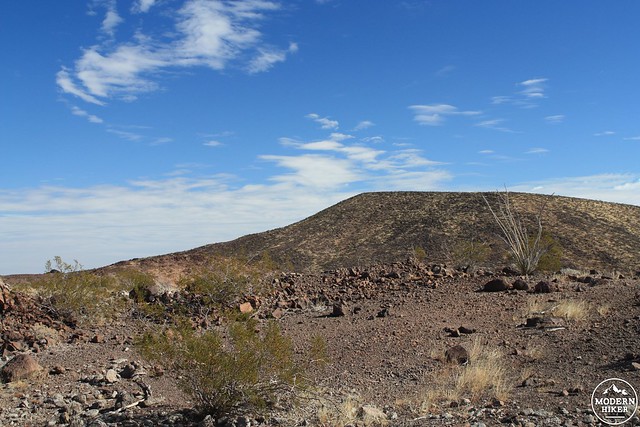 South of the Pass lie the remnants of the Bradshaw Trail – an old stagecoach route built to quickly transport miners from San Bernardino to a gold strike in La Paz, Arizona in the early 1860s (becoming the rare pioneer road that traveled from west to east). Today, most of the road still remains and is passable for 4WD vehicles – and in another strange example of desert land uses the road also forms a boundary between the Little Chuckwalla Mountains Wilderness to the north and the Chocolate Mountains Aerial Gunnery Range to the south. 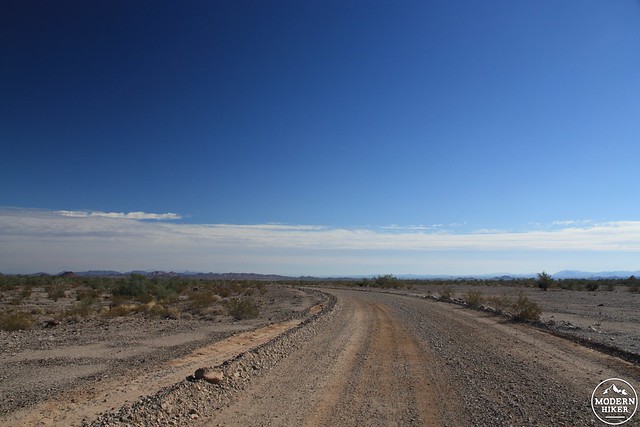 The Gunnery Range is what’s left of the Desert Training Center, a series of military bases throughout the deserts of California and Arizona built to train troops for the North Africa Campaign in World War II. It was the largest military training ground ever built, utilizing more than 18,000 acres of so-called “desolate land.” But maybe those military types were also moving too quickly to see what was actually there.

The desert heals slowly, and many scars of those bases remain on now-public land – in some cases, tank tracks can still be seen in the desert pavement. I’m sure they had other things on their mind, but I wonder if any of the generals noticed tarantulas looking for mates, or spotted rock daisies beneath palo verde trees, or stopped to enjoy the enchanting scent of the inconspicuous-looking cinchweed. 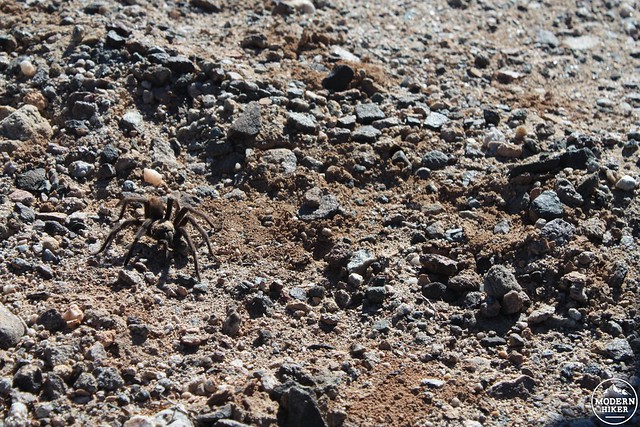 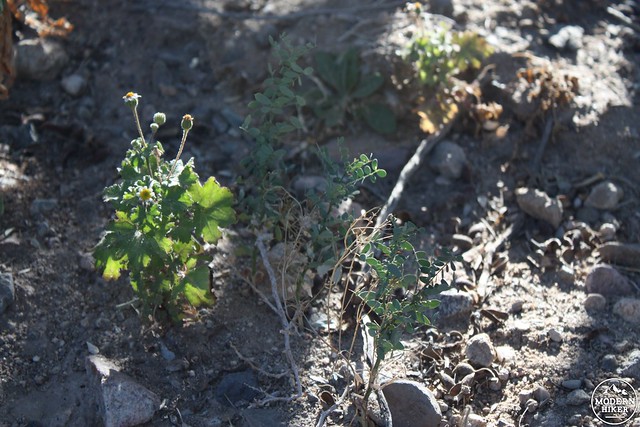 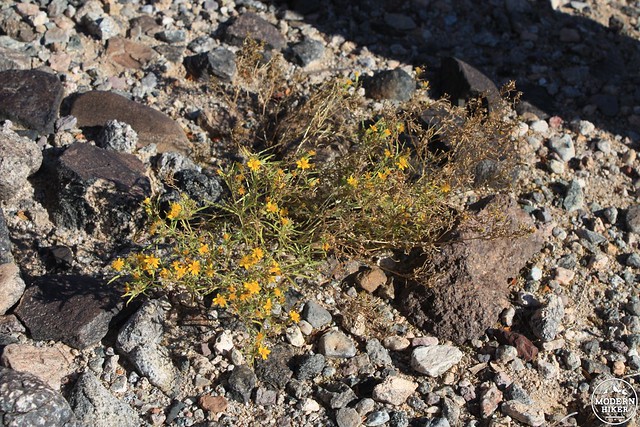 Anyone who thinks the desert is an empty wasteland would do well to take a walk in the Chuckwalla Bench, where the region’s bajada funnels precipitation into a basin that supports a shockingly large and robust desert woodland.

Ironwood and palo verde trees grow well beyond their usual small sizes here, as do smoke trees and the desert willow. You could find some legitimate shade in the desert here – and maybe even comfortably have a picnic. In fact, if you photoshopped these photos to darken the sandy landscape, you might not even know this was a desert. 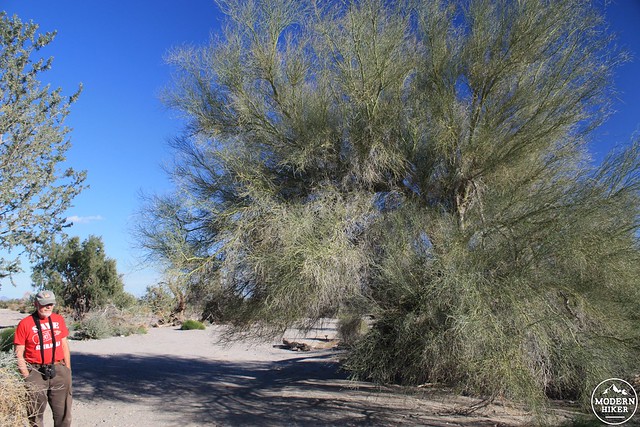 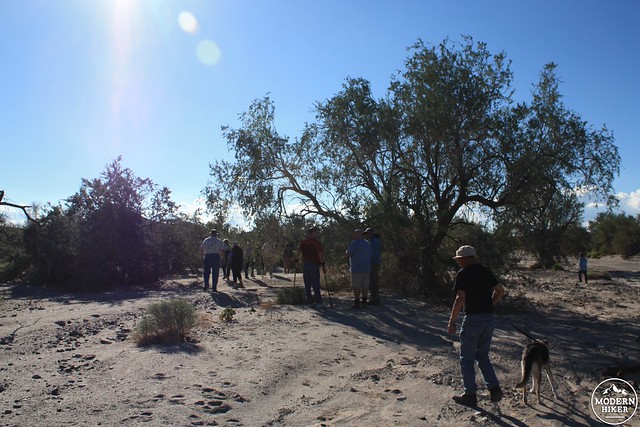 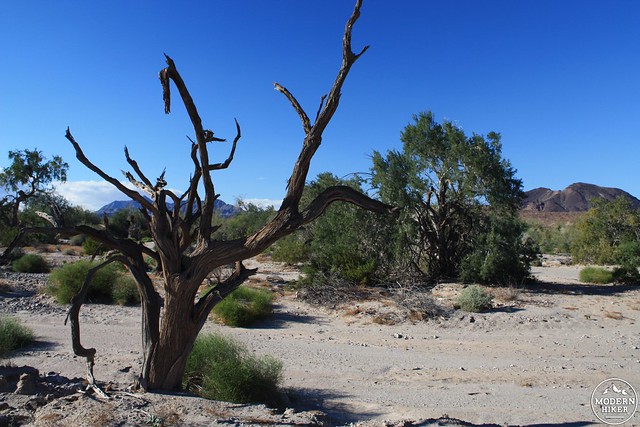 The effect was even more pronounced when viewed from a slightly higher elevation – a river of green seems to cut right through the sand. More than 150 different bird species spend time here throughout the year, and the otherwise silent air was regularly broken with birdsong. 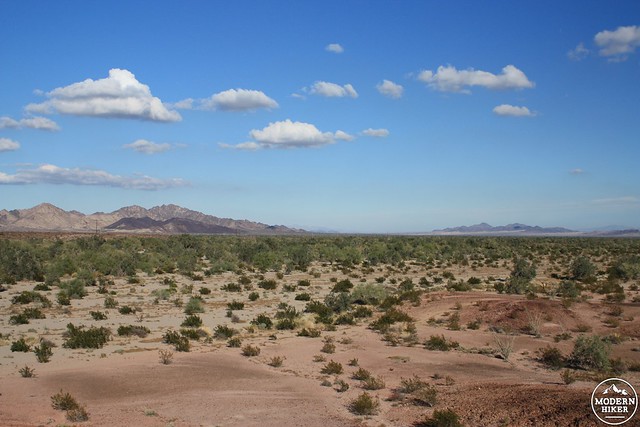 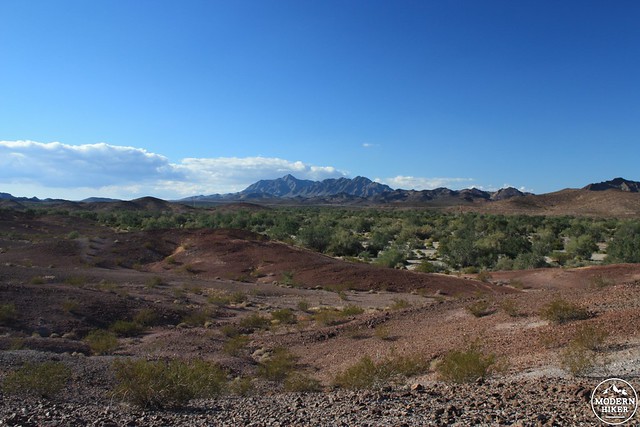 Just a short distance away from this idyllic landscape sits a large, thin tower. From here, the BLM is measuring air speeds to determine whether or not a wind farm would be feasible here, too. If you look at a map of this region, you’ll see a familiar checkerboard pattern of public and private land where the desert has been divided without taking its geography into account. Much of the public land has been purchased by land trusts for preservation, and you can imagine how that might be a bit more difficult with windmills and high-tension power lines in the area.

On the drive back out to the 10, we passed another use people have found for the desert – the Chuckwalla Valley State Prison. This medium-security campus (currently at 155% capacity) is lined with tall, oddly well-manicured palm trees. Looking at the prison, it was tough not to visualize two vastly different futures for the background – one where the trees are shadowed by electricity-generating windmills and another where the prison palms join their Desert Center cousins and fall as the desert slowly reclaims what once belonged to it. 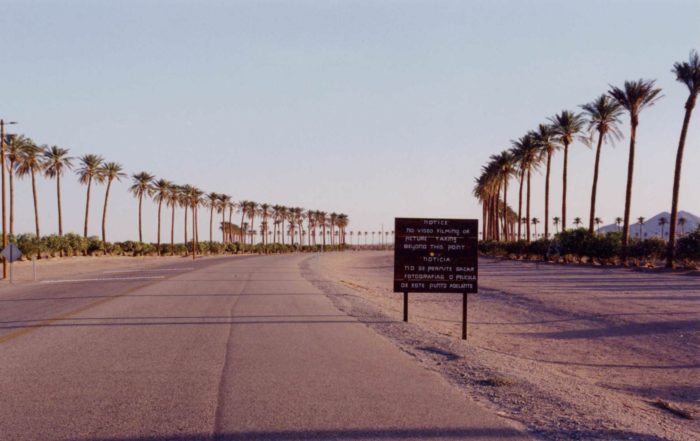 Photo by The Center for Land Use Interpretation. Used by Creative Commons.

Throughout the winter and early spring, the Wilderness Society will be leading free tours and hikes through its Desert Treasures, a series of 12 sites and regions in California. For more information on the upcoming trips, email Mat Jatovsky to sign up for their mailing list.

For more photos from the Chuckwalla Bench, head to Flickr.