Much of Glendale’s Deukmejian Wilderness Park was badly burned in last year’s Station Fire, and the park has remained closed since then. But this week, lower portions of the park were re-opened to public use.

Most of the park remains closed to hikers, but commenters have noted the sheer amount of regrowth taking place in the lower parts of the park. Nice, since the area looked like this right after the Station Fire: 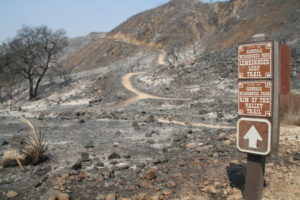