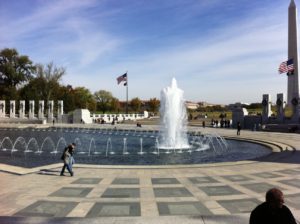 If your experience with National Parks is primarily of the hiking and camping variety, you may be surprised to know that there are also indoor National Park Units (like Seattle’s Klondike Gold Rush National Park), as well as smaller monument units like San Diego’s Cabrillo National Monument and many units in and around Washington, D.C. like the new (and really quite well done) World War Two Veterans’ Memorial.

As you might imagine, being in D.C. and being a memorial to veterans, that particular memorial has become a bit of a hot-bed of political protests surrounding the recent Government Shutdown. Groups of WWII vets have been protesting outside their memorial since the shutdown began … and today, Representative Randy Neugebauer bravely put an American flag in his jacket pocket, marched down to the memorial, and proceeded to lecture a Park Service Ranger, telling her she should “be ashamed” for the shutdown. A video of the exchange was caught by NBC Washington.

The Park Service has been invoking the First Amendment to let veterans enter the memorial even though the Shutdown technically bars visitors from entering, but Neugebauer still found it appropriate to berate the unidentified ranger, asking “How do you look at them and… deny them access?”

The Ranger – who in all likelihood was probably working under the promise of deferred pay, responded with “It’s difficult.”

“Well, it should be difficult,” responded Neugebauer.

After the Ranger apologized, the congressman said “The Park Service should be ashamed of themselves.”

When the Ranger replied “I’m not ashamed,” Neugebauer responded with “Well, you should be.”

Early Sunday morning, Neugebauer voted to delay the Affordable Care Act, setting up the Senate to deny the budget and begin the Shutdown. As Gawker noted, the day before he decided to pick on a National Park Service employee for somehow causing Congress to not fund the Government, Neugebauer told AM Talk Radio station KFYO that he would keep the government shut down “as long as it takes,” claiming he was “doing the people’s work.”

If you’d like to thank him for his service, feel free to send Rep. Neugebauer a congratulatory note. You can also let him know what you think on Facebook.

Closer to home, rafters continue to protest outside Lees Ferry, the put-in point for the Colorado River through the Grand Canyon, and an Occupy Yosemite Protest is scheduled for this Friday.