I’m back from my workweek-long hiking / camping / photographing trip, and it was an overall very awesome experience. Over the next few days, I’ll hopefully find some time to upload all my photos and write up all the hikes I did … but the one word that hung over the entire trip was “wildfire.”

On my second day in Yosemite, while hiking some 17 miles of trail on the North Rim, I noticed the smoke from the “prescribed fire zone” I passed on the way in was looking a little ominous: And of course, on the way back to camp in the Valley later that evening, I was sent on a 3+ hour detour because the fire was out of control.

The next day on the drive out, the smoke was really filling up the Valley – prompting the park to tell its visitors to limit their outdoor activities. A few days later, I heard about another fire that was on the edge of Pinnacles National Monument, as well as an apparent Ring of Fires around Los Angeles — I could see the smoke drifting across the sky from as far away as Owens Lake, but I didn’t see the true extent of the fires until I woke up the next morning.

The Station Fire near La Canada Flintridge has been constantly growing in size and spreading in every direction. Both Inciweb and the LA Times have lots of frequently-updated pages on the fire, and of course, Flickr has tons of amazing photos of the event. The Mount Wilson webcam also had some good shots, but now the site is down – probably because the fire is now threatening the observatories themselves. Here’s an image I grabbed before it went dark: 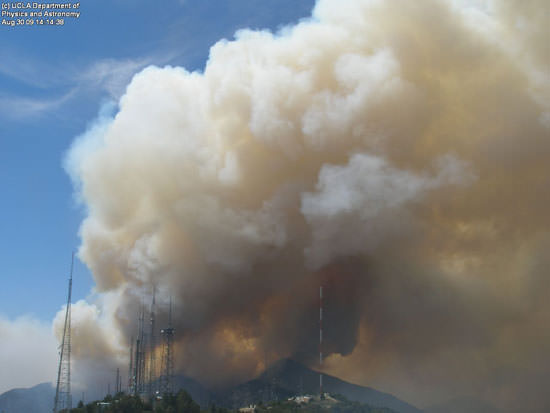 One of the best documentations I’ve seen so far is this time-lapse of the smoke from Eric Spiegelman:

Of course, if you were planning on hiking the western Angeles National Forest anytime soon, you should put those plans on indefinite hold.