As it has been since time memorial, it’s all the rage to complain about the kids today. I’m sure you’ve read an exhausting number of articles, opinions, and “think pieces” about these darned Millennials. We (I was born in 1981, which sometimes puts me in the “ancient” category of the generation, i.e. I ‘get’ Twitter but also know how to use a card catalog) don’t buy enough things, we don’t like to be directly marketed to, we’re easily distracted, we don’t “fit in” in office settings, we demand constant attention and praise and selfies, and our phones – oh man, we can never get off those dang phones with all their Pinterests and Facebooks and such.

We’re so bad with our technology addictions that we need expensive technology detox camps to remember what it’s like to live without constant notifications, and we hate going outside so much that now there’s something called Nature Deficit Disorder because we’d rather be crushing candy than hiking and camping. The Forest Service even has a campaign running to remind people that interacting with wildlife is a much more rewarding experience than interacting with a cell phone.

Forget for a second that all of those traits are basically nonsense (except maybe the Nature Deficit Disorder stuff, which definitely is not simply a generational phenomenon), and imagine – for a second – that instead of trying to use the same marketing techniques that have been in place for decades and expecting young people to react to them, someone actually understood the way those young people interacted with each other and their environments and tried to harness that communication instead.

For the past two years, a very interesting team of designers and researchers have been working on just such a system to help people connect with their parks, meticulously tracking geotags, hashtags, and check-ins at parks all over the country. This morning I had the chance to join them on a web-cast seminar as they unveiled a new web site that will help bring California parks’ online presence into the 21st century. Using information meticulously gathered and organized at the California Protected Areas Database, the teams at Stamen Design, Upwell, GreenInfo Network, and our friends at Hipcamp built CaliParks.org to present data from all of California’s nearly twelve thousand parks in a flashy, easy-to-navigate home page that shows the user different types of outdoor activities. 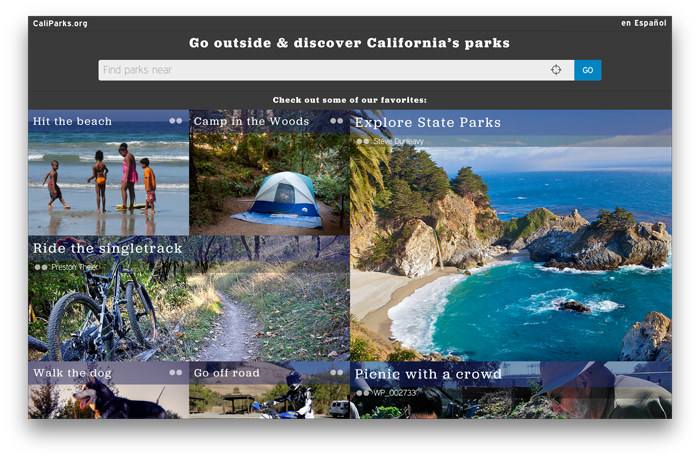 CaliParks is built on the foundation of an earlier project called ParkInfo, but CaliParks is much more social. From its front page, you can drill down to nearby parks that meet your criteria and get more information about them – as well as see a real-time stream of photos culled from places like Instagram, Twitter, and Flickr. UCLA historian Jon Christensen, who conceived CaliParks, said this was one of the most important parts of the project.

“When people don’t think that they will see people like themselves in parks, that’s a barrier to their going to parks and feeling welcome in them,” he said. “While it’s true that attendance at parks is not representative of California’s diversity, nevertheless if you look at social media, Asians, Latinos and African Americans do go to parks and share their images. And I realized we could lower an important barrier by sharing these images and thus creating an invitation for all Californians to enjoy our parks.”

The app is also fully bilingual.

The web app will eventually let people connect to trip-planning software from Google and Apple and there are plans for dedicated iOS and Android versions in the future.

CaliParks is extremely promising, but still very much in its early stages. Pulling images from social media feeds is a very democratic and inclusionary strategy – but it also means that sometimes weird stuff gets into the mix. For instance, when I looked at Griffith Park on the app, the featured photo was two guys drinking boba and another image on the page was from a modeling shoot in the Old L.A. Zoo. Some parks, like Ernest Debs Regional Park, are missing from the database; there isn’t much information on specific activities once you get to the parks’ pages yet; and because CaliParks currently links to each park’s page for further info, sometimes you can end up at an extremely unhelpful page like this:

Of course, CaliParks is brand spanking new and this team certainly isn’t resting on its laurels. The webinar had some big outdoor players participating today and there was a lot of enthusiasm in the (virtual) room … and I think everyone involved would agree that getting more people outside is always a good thing.

We here at Modern Hiker are very excited about CaliParks and can’t wait to see what lies in its future – and for now, it’s a surprisingly fascinating way to see who’s enjoying the parks in our backyard — and just how much In-N-Out they’re eating afterward.

Friday, February 6 – the story was edited to include additional contributions to CaliParks.