It’s that magical time of year in California again – election season. As corporations and candidates spend millions of dollars to clog our inboxes, airwaves, billboards, and mailboxes with creatively-worded political ads of all kinds, this year Californian voters have a chance to vote on a handful of propositions that could each have positive effects on our outdoorsy stomping grounds.

I consider myself a political junkie, but I’ve taken great pains to ensure that the only political writings that make it to Modern Hiker are those laws, proposals, and meetings that affect us as hikers, backpackers, trail-runners, and lovers of the outdoors. So, while I have some personal opinions about who you should vote for in certain races, I will keep this focused on three propositions – Prop 21, Prop 23 and Prop 19. Yes, that Prop 19. Stick with me.

By far, Prop 21 is the proposition that has the greatest potential direct effect on the Californian outdoors. This proposition is an idea that’s been floating around for a few years now – tacking a small charge onto vehicle license fees in order to fund the California State Park system, which would help protect the parks from their usual budget shortfalls and seemingly annual trips to the Budgetary Sacrificial Altar.

Prop 21 would place a new $18 fee on most vehicle registrations, excluding commercial vehicles, mobile homes, and permanent trailers. 85% of the money raised from this new fee would be directly spent on maintaining and operating the state’s parks, while the $130 million the state currently spends on parks would go into the state’s general fund. In addition, most California vehicles would get free day-use admission and parking to state parks and beaches. The proposition is expected to raise $500 million or more annually for the state park system, which currently has a repair backlog exceeding $1 billion.

As people who tend to use the state parks a bit more than most, we would undoubtedly benefit from this proposition. With the recently raised fees, $18 doesn’t get you too far in today’s California State Park System – one trip to Topanga Canyon State Park and Malibu Creek State Park, and you’ve already spent $22 on parking. If Prop 21 passes, you’ll get free parking or entrance to ALL of California’s 278 parks – a phenomenal value for those of us who already use the parks and a great way to eliminate the economic barrier that keeps some people from exploring our state park system in the first place.

I haven’t read or heard too many arguments against Prop 21, but they basically boil down to these – the first is a knee-jerk “ZOMG NO CAR TAX!!!!” reaction – which is no surprise because, really, nobody likes paying taxes. But seriously, you can’t spare 18 bucks to preserve state parks for future generations? That’s less than the price of a movie ticket and popcorn for most places in L.A. and a much better value, too.

The second argument against the prop tries to say the new fee isn’t fair because it charges everyone for something they might not ever use or need. Some families just don’t go to state parks, and why should they have to pay so that people like us can enjoy them? Well, because that’s how society works. I don’t have any kids, but I’m paying for the school system. I don’t take the subway much (because it doesn’t come near me yet), but I still voted for the sales tax increase to fund it because I think it’s important for the future of Los Angeles. Likewise, the California State Park system – protecting some of the finest stretches of wilderness and historic sites in the nation – deserves to be protected not just for us, but for our children and our children’s children. In my brief time in the Golden State, I’ve seen the state parks threatened with closures and budget shortfalls year after year, and frankly – I’m sick of it.

The San Francisco Chronicle, which represents an area of California with an enormous number of state parks, recently came out against Prop 21, claiming (along with the first two arguments I’ve mentioned) that walling off a source of funding for parks in the state budget not only sets up a bad precedent for other “special interests” to set up their own walled budgetary gardens, but it also makes budget-writing more difficult for legislators in Sacramento.

I am sympathetic to this reasoning in theory but not in practice. When was the last time you remember Sacramento passing a budget on time? We are currently in the longest budgetary stalemate in state history and while I may not agree that it’s the best way to run a government, California’s constitution does enable its citizens to legislate when its legislators can’t or won’t. We have the largest state park system in the country, providing over 3,000 miles of trails and almost 15,000 campsites across nearly 1.5 million acres. State parks protect natural and historical resources for everyone, improve public health and well-being and stimulate the economy (a recent study found every dollar spent on state parks creates another $2.35 for California’s treasury). The California State Park system has been severely underfunded for decades, and it’s time for the citizens of California to ensure they remain protected.

If passed, Proposition 23 would suspend California’s ambitious 2006 Global Warming Solutions Act – a law that requires California to reduce its greenhouse gas emissions to 1990 levels by 2020 – until unemployment reaches 5.5% for four consecutive quarters. Californian unemployment has only reached that level three times since 1980.

The proposition’s proponents – primarily Texan oil companies Valero and Tesoro, along with support from the billionaire ultra-libertarian Koch Brothers – provide the disingenuous argument that we have to pick between having a robust economy and a pristine environment. Forgetting the old adage “correlation does not imply causation,” they say the reason for California’s current 12% unemployment rate is not the nationwide economic collapse, but the enactment of the Global Warming Solutions Act.

The truth is, these companies are spending tons of money to win this proposition because they’d rather not spend even more money to clean up their refineries to comply with the law. Valero and Tesoro are some of the nation’s biggest polluters, and own and operate some of the dirtiest industrial sites in California. Other oil and gas companies that have already invested in cleaner technologies like Shell, Chevron, and Exxon-Mobil either oppose Prop 23 or are remaining neutral.

Ignoring the very real economic benefits of leading the nation toward a clean energy economy, what this prop boils down to for hikers is this – If Prop 23 passes, dirty industries won’t have to follow California’s air pollution rules. Dirtier air means more smog, less healthy air, and less impressive summit photos, too.

Modern Hiker recommends you vote No on Prop 23.

Quite possibly one of the most revolutionary things any of us will ever get to vote on in our lives, Proposition 19 would allow people 21 and older to possess, cultivate, or transport marijuana for personal use – which would be limited only to residences or newly-licensed businesses. The new law – in direct opposition to federal statutes – would essentially legalize marijuana in the Golden State, allow the state and local governments to collect taxes on marijuana and provide “potential increased tax and fee revenues in the hundreds of millions of dollars annually and potential correctional savings of several tens of millions of dollars annually.”

OK. So right now you’re wondering what the heck this has to do with hiking. I’ve got two words for you – pot farms.

Over the past few years I’ve read stories about clandestine pot farms in the California backcountry with increasing frequency. Malibu Creek State Park had headline-creating busts both in 2009 and this year. To supply the demand for California’s medical marijuana, the black market saw an excellent financial opportunity. Since it’s still illegal to operate a large grow facility in the state (various counties allow personal and co-op cultivation), they’ve taken to squatting in California’s state and national parks instead.

The people running these pot farms are not concerned with backcountry leave-no-trace principles, to say the least. The farms often alter the wilderness they’re in with terracing, irrigation, fertilizer and pesticides, not to mention trash. Hikers, backpackers, and hunters who use the wilderness legally can run into trouble in the form of armed guards and dangerous booby traps, far from the closest police and medical assistance.

Pot farms have also been responsible for some of California’s wildfires, including last year’s La Brea Fire in the Los Padres National Forest, which burned nearly 90,000 acres of forest.

Will legalizing marijuana stop these illegal grow farms? It’s impossible to know for sure. But here I think it’s safe to draw some inferences from recent history.

, an excellent and exhaustive history of the first failed prohibition movement in America. I didn’t know much beyond the bullet points of Prohibition before I read this book, but you don’t have to look too hard before you start seeing parallels with the current marijuana situation – both were driven by anti-immigrant and religious fervor, both were largely unenforceable and riddled with loopholes for the affluent, and both were largely counterproductive in the long run.

Whether or not that all plays out the same way, I think we can at least agree that the appeal of backcountry pot farms to drug cartels will be greatly diminished once the market is balanced by legitimate farmers who want to enter the business via a legal avenue. Why put all of the time, effort and resources into a heavily defended, remote operation when a farmer in Mendocino County can walk into the Department of Agriculture for a permit and add marijuana to his crop field?

It is for this reason that Modern Hiker recommends a vote of Yes on 19. 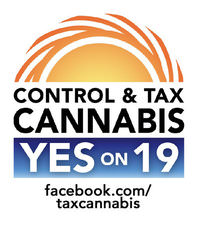 … and now, it’s your turn. What’s your opinion on the current slate of propositions? Anything I missed? Feel free to add your voice to the debate in the comments – just keep it civil, ok?