A broken spectre is an unusual phenomenon of weather, light, and positioning that results in the viewer seeing his or her shadow cast below themselves in a cloud, usually surrounded by a prismatic halo. Apparently if you’re hiking on a ridge above the cloudline, the sun is above and behind you AND you look down at just the right angle, you can see it … which sounds incredibly difficult to do.

Luckily, a hiker on the social news site Reddit posted this image of just such a thing happening: 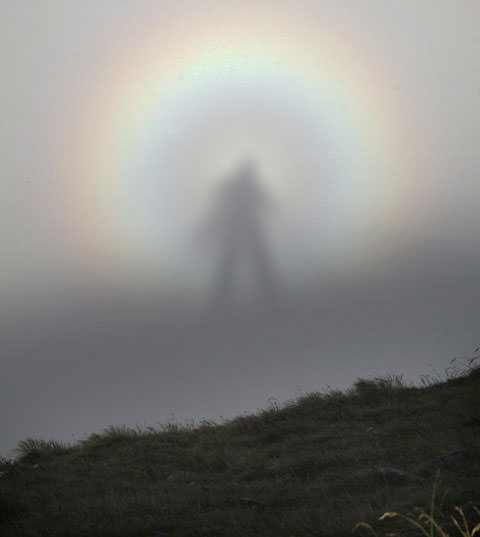 I have never seen this happen but was thinking you could probably get a decent chance during a good June Gloom on the summit of Sandstone Peak if you were above the clouds. Has anyone out there ever had the good fortune to see one in person?

UPDATE: Apparently they are actually called Brocken spectres, or in German, Brockengespenst. It’s named after an often-foggy, easily-accessible mountain in Germany where the phenomenon can often be seen.