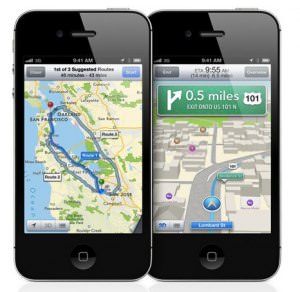 If you’re a member of the iPhone Legion and you updated to iOS 6, you’ve probably already noticed that Apple Maps are pretty dang awful.

Apple had to swap out Google Maps for a variety of reasons – licensing agreements, technical limitations, etc. – but unfortunately replaced it with something that falls far below the threshold of an acceptable map. It’s gotten so bad that Apple’s CEO formally apologized with links to direct competitors’ mapping apps … which is great, except that Apple Maps is still the map that’s baked into the OS, so it’s still going to be your default no matter what.

I know a lot of people say this is just a bunch of nerds complaining about a minor inconvenience – but it’s not — Apple Maps simply just cannot locate things. I couldn’t get directions to Cole’s or Eagle Rock Brew Supply – and when I searched for the Improv on Melrose it tried to send me to a traffic school.

This has ramifications beyond just trying to find good places to eat or buy beer grains – a recent post on KCET’s SoCal Wanderer documents Apple Maps’ tremendous failures out in the desert, where the app seems bent on sending you down old 4WD roads in the middle of the Mojave. A search for Furnace Creek – one of the main destinations in Death Valley National Park, instead sends you to an actual creek some four hours north of where you were trying to get to in the first place.

Unfortunately, a lot of people use their iPhones to find trailheads for their hiking trips – and this is kind of a recipe for disaster. I strongly recommend you always bring (and know how to read) an actual, physical map with you when you’re heading out into the wilderness – but if you still want to use your iPhones for directions, follow these instructions to add Google Maps back to your home screen. All of my write-ups have a Google Maps pin-location on the trailheads, so you can always use that to find out where you have to go.

Also, if you’re using the Modern Hiker iPhone App, we’ve got an update submitted to the App Store that adds satellite views to the Maps section – that should go live within 2 weeks once Apple gives it the OK. Unfortunately, unless Apple itself goes back to Google we won’t be able to incorporate Google Maps in our app, but the satellite view should at least help you get your bearings.