I recently joined KPCC’s Take Two for a walk to the now-closed Hollyridge Trailhead in Beachwood Canyon. Long story short, the folks at Sunset Ranch asked for help with the crowds at their sole access point, and the city decided to lock the pedestrian gate that had afforded the easiest access to front-views of the Hollywood Sign since the 1920s. Unfortunately, the ruling in that court case expressly states Sunset Ranch does not have exclusive access to that trailhead or the fire road that leads to its stables — which was likely closed because someone saw that the Bronson Canyon trailhead is about 1500 feet away by the crow’s wing without realizing it’s more than 2.5 miles by the walker’s foot.

In response to the ongoing conflict between residents in the Beachwood Canyon area and members of the public who would like to use public streets to access a public park, L.A.’s mayor Eric Garcetti suggested — perhaps flippantly — that a gondola from Universal Studios might be “a better way” for people to enjoy the world-famous Hollywood Sign without clogging streets and angering residents.

The comment has been picked up by blogs and news outlets all over Southern California – who all seem to be excited that L.A. might get a shiny new toy without realizing that a gondola does nothing to solve the issue in Beachwood Canyon while also creating a slew of new problems for the Park and its surrounding neighborhoods.

People who are trying to access the Hollyridge Trailhead in Beachwood Canyon — in general — are not interested in hiking to the top of Mount Lee. They are only interested in getting to a place where they can see the front of the Hollywood Sign to snap a photo or selfie with the minimum amount of effort. Building a gondola to the top of Mount Lee would not only add hundreds if not thousands of people to an area of the park that is relatively lightly visited, but it would also require a large build-out of infrastructure at the top of Mount Lee and ultimately disappoint everyone who was trying to snag a Sign Selfie but who now found themselves staring at the backside of the giant letters. 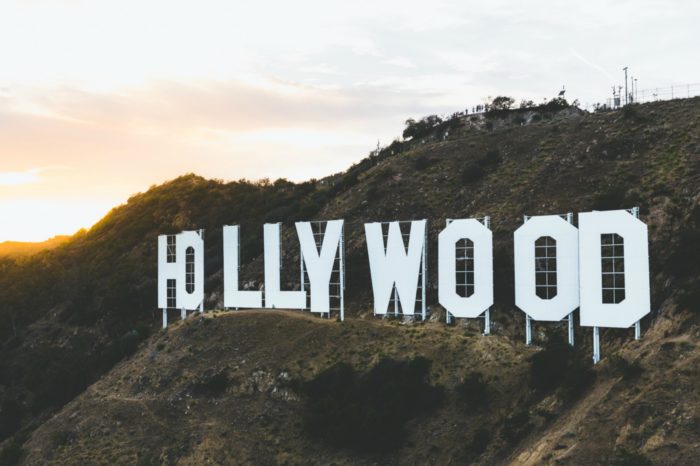 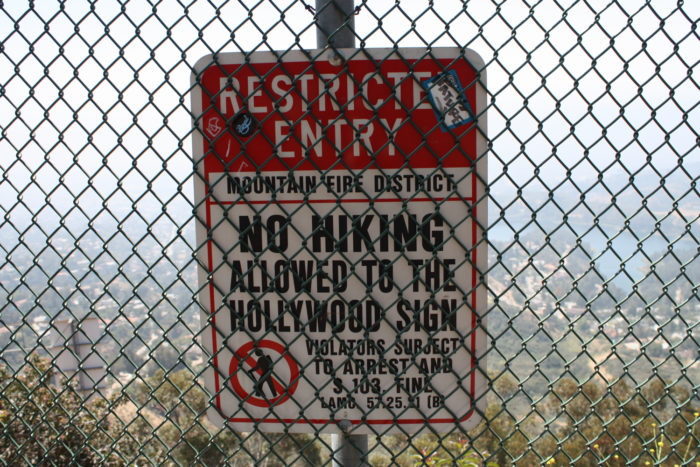 what people get on Mount Lee

A new ‘viewing platform’ built below and in front of the park would add even more of a construction footprint in an area of the park that has remained relatively unscathed by development since its founding in 1896.

Either location would require invasive construction in the mostly undeveloped and undisturbed western regions of Griffith Park (where P-22 likes to hang out), towers and cable cars that would mar the experience of hiking popular routes like the Eileen Getty Ridge Trail to the Wisdom Tree and Cahuenga Peak, cable car operations over residential neighborhoods, and buildings that would likely adversely affect the views and ‘neighborhood character’ of the neighborhoods to the south of the Park — which have not been shy about filing lawsuits to preserve those things in the past.

So, Mayor Garcetti,here are 4 Ideas for Griffith Park that are Better than a Gondola — and none of them require massive construction efforts inside one of L.A.’s precious few urban green spaces:

L.A. is a world-class city and the Hollywood Sign is a world-famous landmark, so why do I keep running into European tourists near the Griffith Park Composting Facility asking how they can get to the Sign? Because there is no coherent and comprehensive way for people looking to see the Sign to find out the best way to do that. 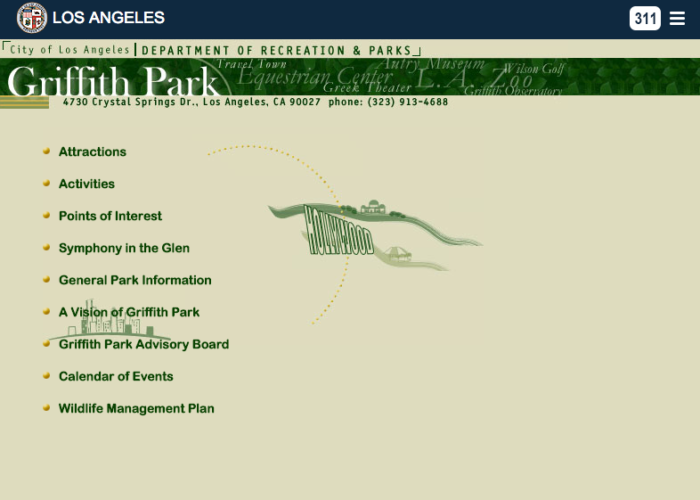 The official Griffith Park web site. In 2017. hollywoodsign.org is much better, though.

It took more than a hundred years for Griffith Park to get trail signs and maps installed — which is its own separate embarrassment — but why aren’t there any signs directing tourists and visitors to places where they can see the Sign? Why isn’t there a modern website for Griffith Park with information on viewpoints and foot access? Why aren’t there uniformly branded information stations at places like Hollywood and Highland or Union Station, street signs in the surrounding neighborhoods or information kiosks at nearby Metro Red Line stops? The main reason people are still driving up Beachwood Drive is because it’s too difficult to find the better places to go.

There are already a number of places where people can easily and reliably view the Hollywood Sign with or without a hike, including: 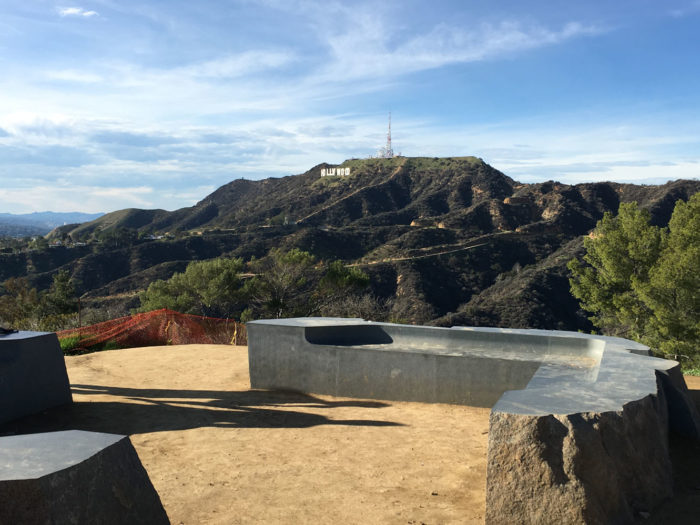 The Tiffany and Co Viewpoint

Why not spread the crowds out to all of these places to avoid congestion and overcrowding? A few of these viewpoints could be slightly developed or improved with minimal additional footprints, and would definitely cost less and be less invasive than a giant viewing platform and network of cable cars. Some of these places are in residential neighborhoods, so let’s also make sure to …

Use and Extend Existing Metro and Shuttle Routes

Beachwood Drive already has a DASH shuttle that ends just 0.7 mile from the Hollyridge Trail. If cars on Beachwood Drive are the problem, why not extend the DASH shuttle to the trailhead and make the upper portion of that road for residential use only (with better signs and directions at the bottom of the canyon making it clear, of course)? 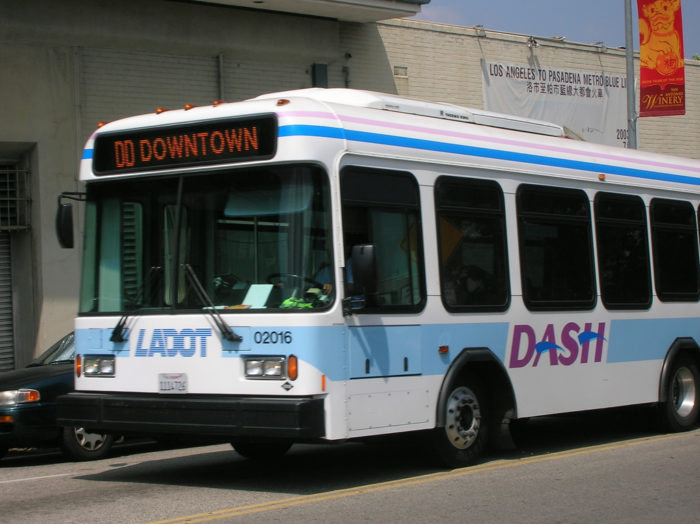 “I’m a part of the transit network, too!”
DASH Bus photo by Frederick Dennstedt, used via Creative Commons license.

Recently, the parking nightmare near the Griffith Park Observatory has been significantly improved with the addition of paid parking and an increased DASH shuttle schedule that connects to the Metro Red Line stop at Hollywood and Vine. It’s a good start, but it’s not enough.

Griffith Park needs and deserves a park-wide shuttle that services the entire park and connects with major transportation hubs. It could meet up with the Red Line stops at Sunset / Vermont and Hollywood / Western, stop near Hollywood and Highland and Universal Studios for the tourists (and the parking), then hit the north part of the park near Travel Town, the east at the Autry / L.A. Zoo and the Merry-go-Round, the south at the Pony Rides, the Greek Theatre, the Observatory, and Fern Dell. That route hits all the major entry points and attractions in the park, gets people close to Sign viewpoints, and will reduce the need for a private auto inside the park or on residential streets nearby. Heck, I bet you could even add the Beachwood route to this. Brand the entire system as the Griffith Park Line and use the driving time to play videos that answer common questions about the park and lay out the park’s rules and restrictions, and you can even make Griffith Park visitors less likely to get lost, hurt, or break rules.

Griffith Park is a unique, delicate balance of developed areas and rugged wilderness regions. Yes, the park has a carousel and zoo and several museums, but it is also home to endemic species and maybe the most urban mountain lion who ever roamed the hills. So if we’re trying to capture tourist dollars, maybe we can try to keep all that kitschy infrastructure to places that are already high on the kitsch factor? 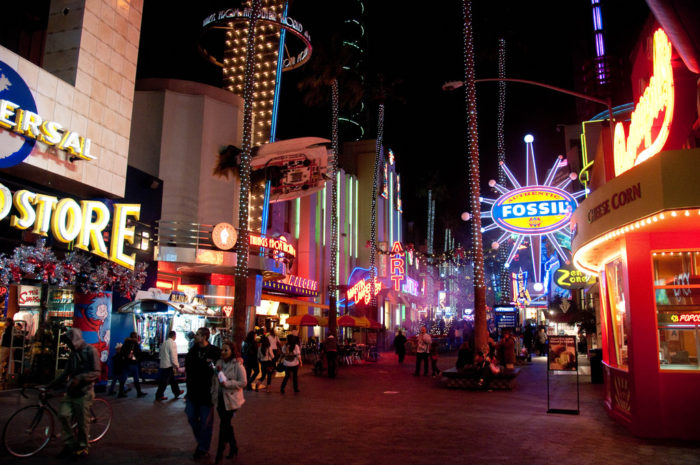 If we must establish some visitor center / tourist museum places, let’s at least do it where there’s already developed space and infrastructure for it. There’s no reason an off-site exhibit couldn’t be housed at Hollywood and Highland or Universal Citywalk. Buy all your souvenirs and take a guaranteed-clear-sky green screen photo there — and maybe admission gets you an exclusive, direct shuttle ride to the Lake Hollywood viewpoint or the Griffith Park Observatory? If the Lake Hollywood Park area is limited to these shuttles (and DASH) only — and restricted by time or number of rides — that might be able to convince some of the residents there.

Also, I hear the Target Husk has a pretty sweet view of the Sign — maybe we could get a variance for a rooftop observation deck and then finally get that thing built?

In 2005, the Griffith Park Master Plan included two proposed aerial tramways — one from the Autry to a viewpoint atop the Toyon Canyon landfill area and one that would travel from the Greek Theatre to the Observatory. Backlash from park users was so strong that both proposals were scrapped.

And — proving once again that everything new is actually old — back in 1905 the guy who built the Angel’s Landing funicular in downtown Los Angeles formed the Mount Hollywood Scenic Railway Company with plans to build a similar railway to the top of Mount Hollywood. On the summit, he planned to build a large assembly hall, bandstand, pavilion, and observatory. 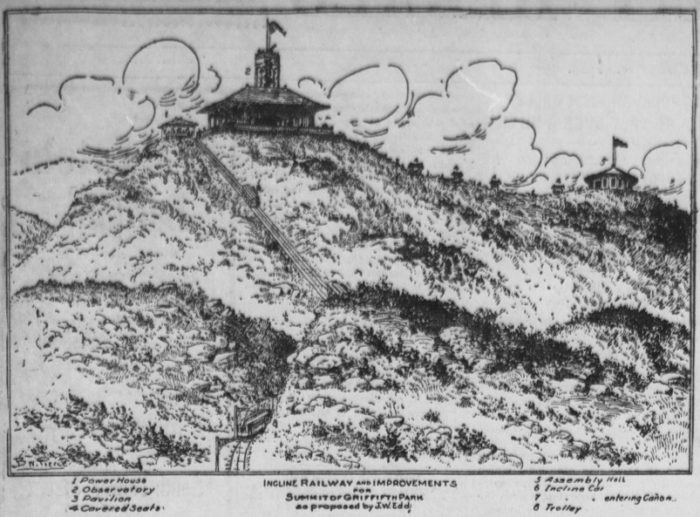 The plans languished for two years before being abandoned. I don’t think it will be long before this gondola plan meets a similar fate, so let’s get cracking on some of these real-world solutions instead and leave the gondola idea to the dustbin of history, ok?

The Tram That Won’t Die (UPDATE)

After being bought by AT&T, now Warner Brothers Studios is offering to build a tram to the top of Mount Lee from their backlot for $100 million. The idea was dumb in 1905, it was dumb in 2017, and it’s still dumb in 2018. It solves none of the many issues currently facing Griffith Park and only adds more. Dumping thousands of tourists per day deep into the middle of the park — tourists who are not likely to even be aware of Leave No Trace principles or have any long-term attachment to the park or the city and are much likelier to cause damage and overuse in their wake — is a recipe for disaster. As if it were weighing in itself, a small section of Griffith Park burst into flame on the same day this news was announced. The Friends of Griffith Park issued a statement against the idea.

Los Angeles City Councilman David Ryu’s Council District 4 includes the entirety of Griffith Park and many of its surrounding neighborhoods. Even if you don’t live in his District, if you recreate in Griffith Park, you should let his office know how you feel about this – or any – gondola to Mount Lee.