36 Hours in the Santa Maria Valley

The following is a sponsored post for Visit Santa Maria. All opinions expressed here are our own.

A few weeks ago, thanks to Visit Santa Maria, I had the privilege of taking a road trip to visit the Santa Maria Valley.  Located a beautiful 3 hour drive north of Los Angeles, the area is known for its chill vibe, accessible wine country and, of course, Santa Maria Style barbecue.

We began our trip on a Friday morning, it had been a while since I’d driven north on the 101 and was excited to hit the road.  After navigating the 10 and 405, I hit the 101 and breathed a sigh of relief as it looked like smooth sailing ahead.  Before no time I was in Ventura enjoying beautiful ocean views out the driver’s side window.  In Santa Barbara, we took the 154 West over the San Marcos Pass.  The winding mountain roads were a joy and before no time I started seeing the familiar landmarks of the Central Coast wine country.  We rejoined the 101 in Los Olivos and not long after we were pulling into the Radisson, our home for the weekend.

Once checked into the hotel, we immediately went out looking for a local brewery.  A short drive from our hotel, we found Naughty Oak Brewing Company in Orcutt.  Naughty Oak had a great selection of craft beers, from a straightforward pilsner to a hoppy West Coast style IPA. I was sold. At the recommendation of the bartender, we ventured into the more exotic.  She suggested a seasonal brew called My Jam – a  Belgian Tripel that has 60 pounds of strawberries added before its aged in wine barrels.  Fruity beers aren’t exactly “my jam”, but this one had a refreshing crispiness while remaining fruit forward, with a wonderful strawberry color in the glass.  A few beers deep, we enjoyed the sunset from Naughty Oaks’ wrap around patio. 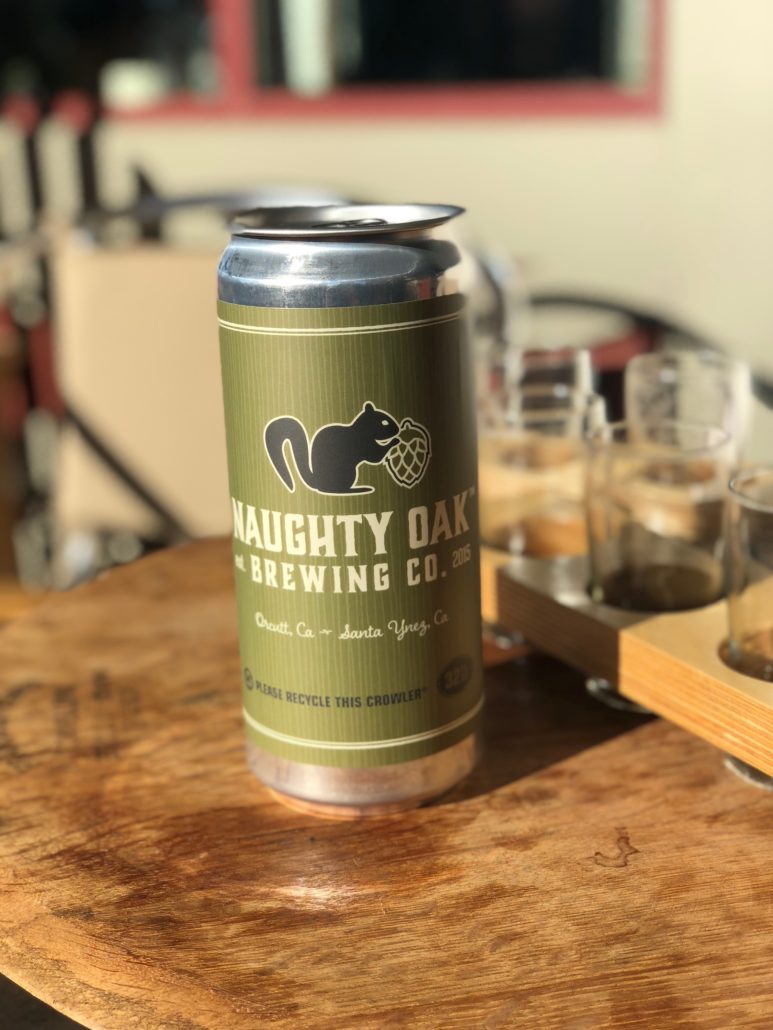 At this point we had worked up a little appetite and headed up the block.  The main drag in Orcutt has a cozy feel. This small-town main street has been reinvigorated by the growing interest California wines, evidenced by the handful of tasting rooms we passed on our way to eat. For dinner we chose the Far Western Tavern, a Santa Maria Valley classic that had recently moved to Clark Ave.

We walked in to the familiar sights and smells of a classic steakhouse: a dark, yet inviting bar gave way to a large dining room filled with tall private booths.  Our plan for the next day was to indulge in classic Santa Maria Style barbecue, so we stuck to lighter fare and were not disappointed.  Salad, soups, and seafood were all well prepared and served with a smile. With full bellies and high spirits, we returned to the Radisson excited for the day ahead.

Saturday’s alarm came a little early after the prior evening, but we jumped out of bed, eager to explore the area’s trails before a wine tasting later in the afternoon.  For a little extra motivation, we chose a beach hike, the Oso Flaco Lake Trail.

You might be thinking, “If this is a beach hike why is it called a lake trail?”  The hike begins at the Oso Flaco Lake and meanders gently to the ocean. The leisurely route takes the Oso Flaco Boardwalk, crossing the lake and continuing over the dunes.  From there the path cuts between two fenced off sections, ultimately dropping you out on the beach.  We chose to pack a little breakfast and enjoy it in the sand before returning the same way. 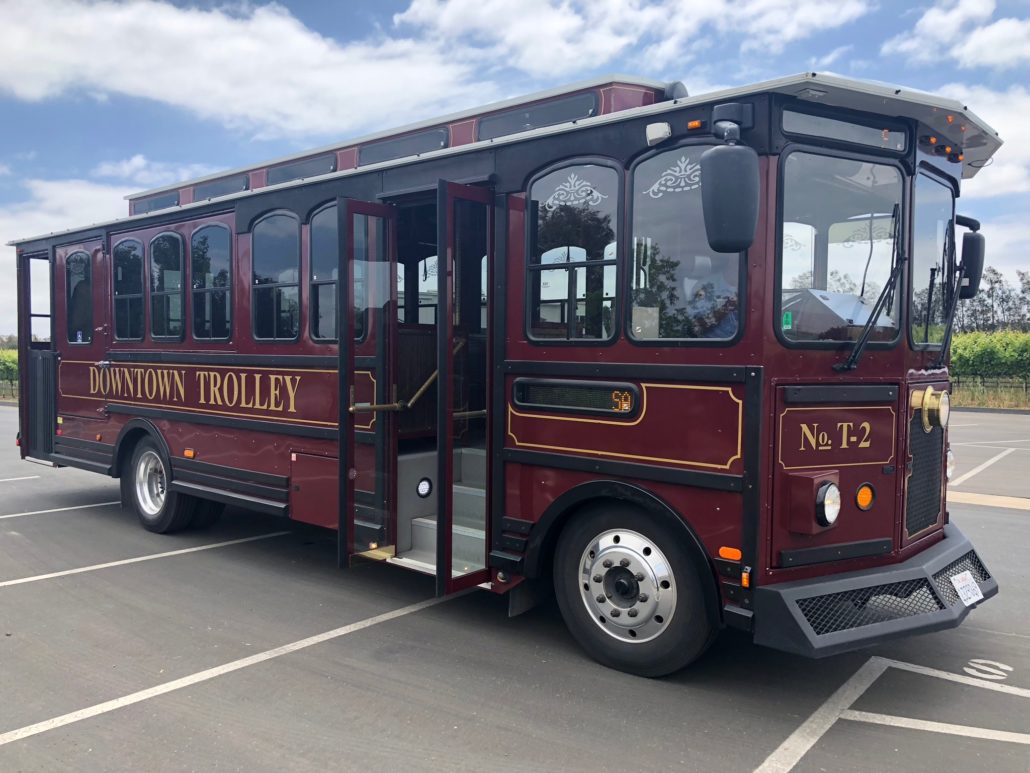 Back at the hotel and cleaned up, it was time to board the wine trolley, a unique feature of the Santa Maria Valley.  This quaint looking vehicle makes a round of the valley, stopping at 5 tasting rooms on its hourly loop.  The trolley is hop on, hop off allowing riders to explore the area at their own pace.  We picked 3 stops that looked promising: the Ca’ Del Grevino in Orcutt, followed by Cottonwood Canyon and Costa De Oro.

As we tasted the region’s wine we were impressed by the quality, but we were even more excited about the low-key atmosphere and affordability. Each tasting room was unique, Costa De Oro and Ca’ Del Grevino were stand-alone tasting rooms with an intimate feel.  Cottonwood Canyon’s tasting room is located in their vineyard, where a tasting is complimented by a stroll around the grounds and a poke into an on-site cave. Keep an eye out: barbecues are occasionally hosted on the lower part of the property.  The wine was great at all three, but if I had to choose one I would recommend Cottonwood Canyon for the ambience.  Something about enjoying a glass of wine amongst the actual vines makes for unparalleled experience.

Apparently, we lost track of time … After what felt like a few minutes, the “conductor” on our wine trolley tapped me on the shoulder to let me know this was his last pick up of the day.  Ok fine, it was probably time to go anyway.  I bought a bottle to go, excited to share with friends back in LA. 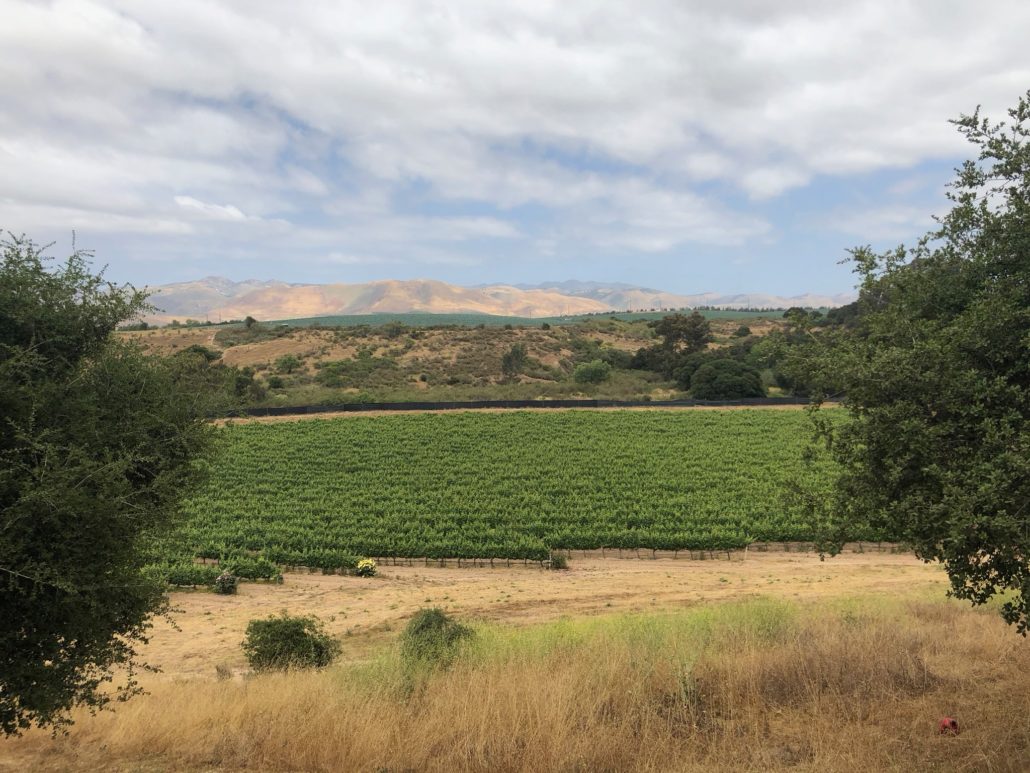 Our next stop was Shaw’s Steakhouse to enjoy world-famous Santa Maria Style barbecue. Shaw’s is an institution.  The parking lot is always packed with groups of people coming and going, and the restaurant looks like the town was built around it…maybe it was.  Since this is a hiking site, not a food site I’ll save you my food critic impression and simply say, get the tri-tip.  It’s awesome. If your server pegs you for an out-of-towner and doesn’t offer salsa, ask for it (I had to).  That’s a thing in Santa Maria, salsa on your steak.  I can’t promise it’s a tradition I’ll take home, but the salsa with the steak at Shaw’s felt like the right way to celebrate a full day.

Sunday morning, we got up early, enjoyed a great breakfast at the Radisson, and hit the road.  We decided to take our time and enjoy the PCH drive the whole way back to LA. It took a little longer, but we were still back in LA by mid-afternoon feeling relaxed, refreshed, and energized for the upcoming week.