In early May, Kolby of 100hikes.com decided he wanted to hike 100 times before the end of 2009. Last night he finished the task with a group of friends on a rainy night hike to Echo Mountain, the first hike he did as part of this journey.

I met Kolby on a landmark hike of my own – my second attempt at San Gorgonio Mountain. He helped me get up to the top of Southern California’s tallest peak, and I’m proud to say I was there when he reached the end of his 100th hike.

We started in the late afternoon with a group of just under 20 hikers, and after hearing some inspirational words, headed past the paved gate to the Cobb Estate and toward Echo Mountain.

It had rained earlier in the day, and was still drizzling for the beginning of the hike. All of the sweeping views of the cities below were completely obscured by fog, but it was definitely easier hiking this trail in the rain than it is during the full summer sun.

Eventually, we were able to get above the lowest layer of clouds. As the remaining clouds dissolved away, more of the surrounding landscape appeared around us – providing some really incredible views.

Too often, I stay inside if it looks like it’s going to rain, but some of the most incredible hiking moments I can remember have come from hiking through and above the cloud layer — I really need to do some of these fog hikes more often!

We ended up arriving at Echo Mountain just in time for the fog below us to dissolve, letting the city lights mirror the stars above. We popped some champagne and beer and celebrated before one of the most beautiful sights I’ve ever seen hiking in Los Angeles. Sadly, my shaky hands didn’t do the view justice, but Kolby had better luck (click for full image – it’s pretty amazing): 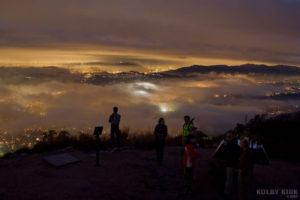 A few more pictures and videos from this hike are posted on Flickr.

A huge congratulations to Kolby for this great accomplishment — and remember, when those New Years’ Resolutions start popping into mind later tonight, the years are whatever you make them. Take a little bit of time to stop worrying and start doing in 2010. Hike Whitney. Try snowshoeing. Go camp in the desert. And don’t beat yourself up if it’s not perfect – just get out there and try … even if it’s raining!