Angel Island State Park feels like an escape to Never Never Land in the middle of San Francisco Bay. Its treasures are 13 miles of hiking trails, hidden beaches, and military artifacts, as well as spectacular views of the Golden Gate Bridge. Taking the ferry to the island, the largest natural one in the San Francisco Bay, and the ability to camp overnight, makes it special, too. It’s a fantastic San Francisco getaway close to home. This hike takes you to Mount Livermore, the highest point on Angel Island at 788 feet.

Although this route starting on the North Ridge Trail is steeper, it’s a shorter route to the summit. You also avoid crowds funneling off the ferry towards the Visitor Center. It’s easy to add on a side trip to one of the island’s hidden beaches (see Notes below) or a historic site. Just be sure to bring a picnic: the island has plentiful picnic tables and you will want to savor it all until you have to grow up…errr, catch the ferry home.

In 1775, Spanish explorer Lt. Juan Manuel de Ayala landed at Ayala Cove. He named the island Isla de Los Angeles, or “Island of the Angels,” following a practice of naming an island after the Catholic feast day that coincides with a ship’s arrival. In this case, it was the feast day of Our Lady of the Angels.

Before Ayala’s time, the Coast Miwok used the island seasonally for hunting and fishing approximately 2,000 years ago. Fast forward to the early 1840’s, and cattle roamed the island on Antonio Maria Osio’s cattle ranch during Mexico’s rule of California. After the Mexican-American War and California’s statehood, the U.S. military built housing and defense systems for multiple wars, beginning with Camp Reynolds during the Civil War in 1863.

The military occupied the island for nearly 100 years, until a Nike missile site was removed in 1962. In between, from 1910 to 1940, thousands of immigrants were detained at an Immigration Station on the northeastern side of the island. After a fire in 1940, immigration processing was transferred to San Francisco. The Immigration Station has since undergone a thoughtful and poignant restoration for visitors.

The military began withdrawing from the island in 1946, and the California State Park Commission started acquiring land there in 1954. Once the missile site closed in 1962, most of the remaining acreage was transferred to California State Parks. Today, the Coast Guard maintains a station at Point Blunt, and visitors are able to explore many of the former batteries, garrisons, and military buildings off the Perimeter Road.

Stepping off the ferry, bear left at the Welcome sign onto the North Ridge Trail. The moderately wide, partially shady trail climbs east up wooden staircases under wind-twisted trees. The first of many picnic tables greets you up the first hill, and peek-a-boo views of Ayala Cove. 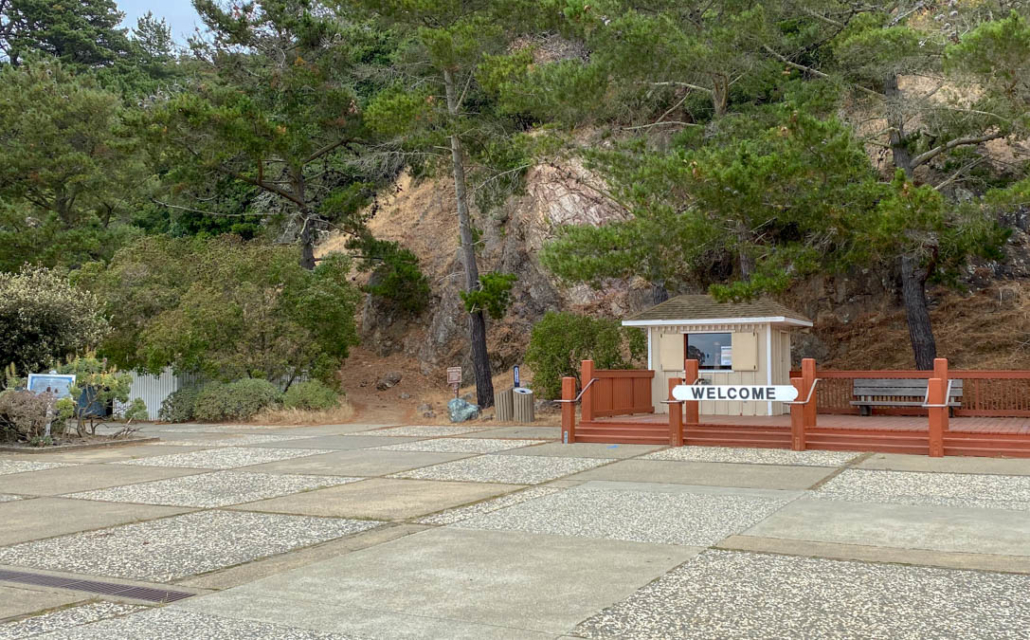 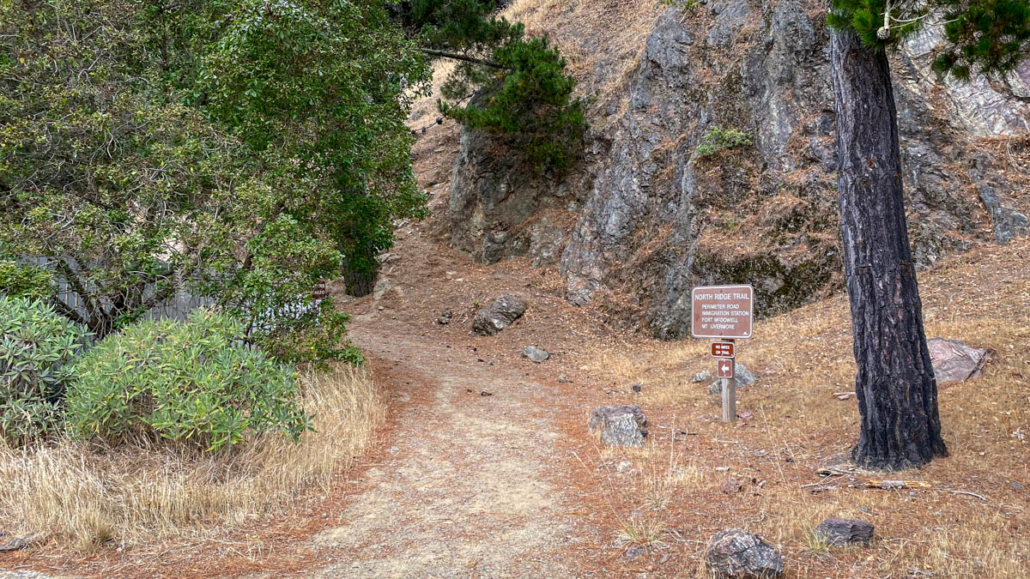 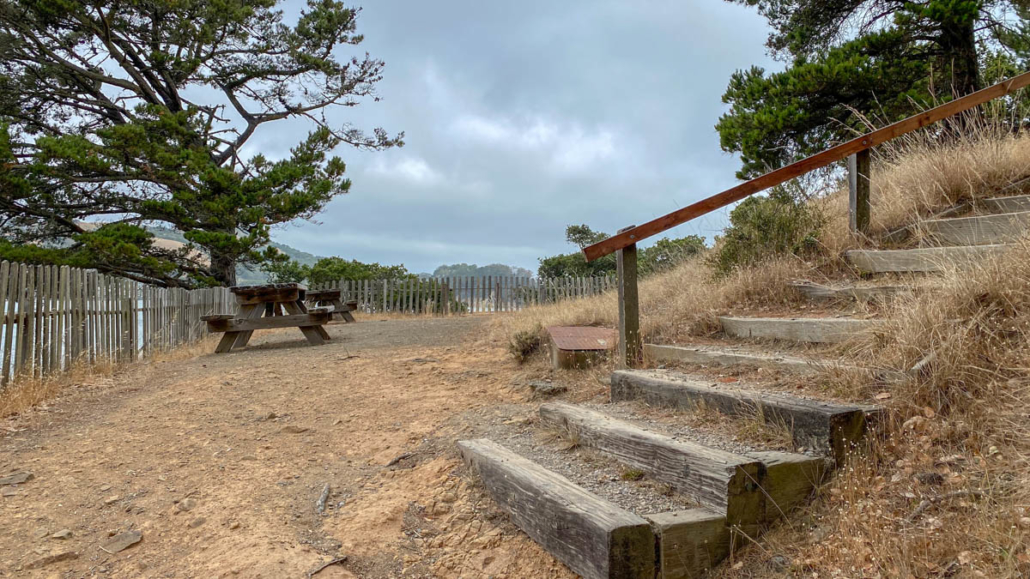 In 0.2 miles, cross the Perimeter Road, a paved, bike-friendly road that circles the island. The North Ridge Trail continues towards Mount Livermore, partially shaded with oaks, bays, and madrone. 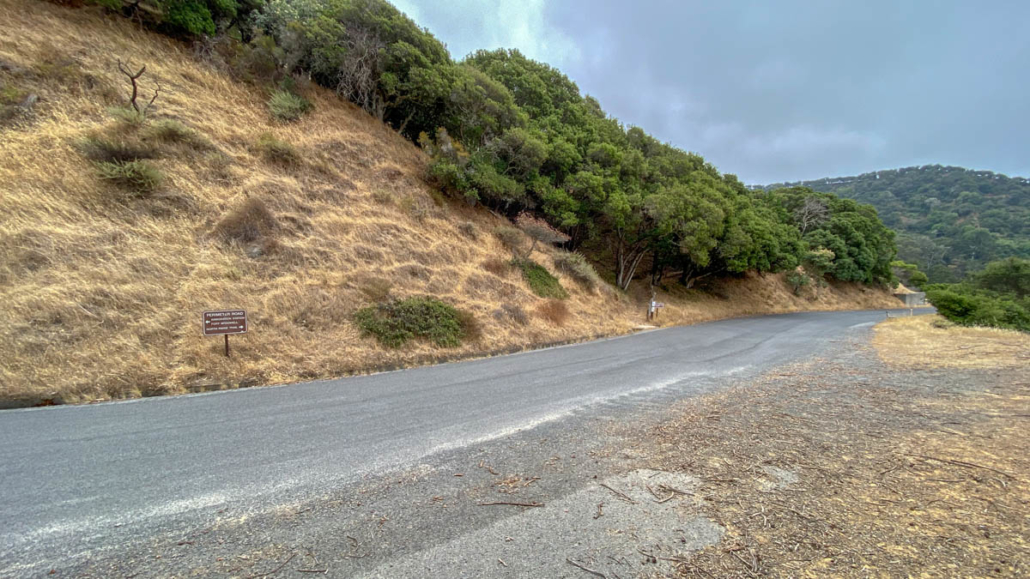 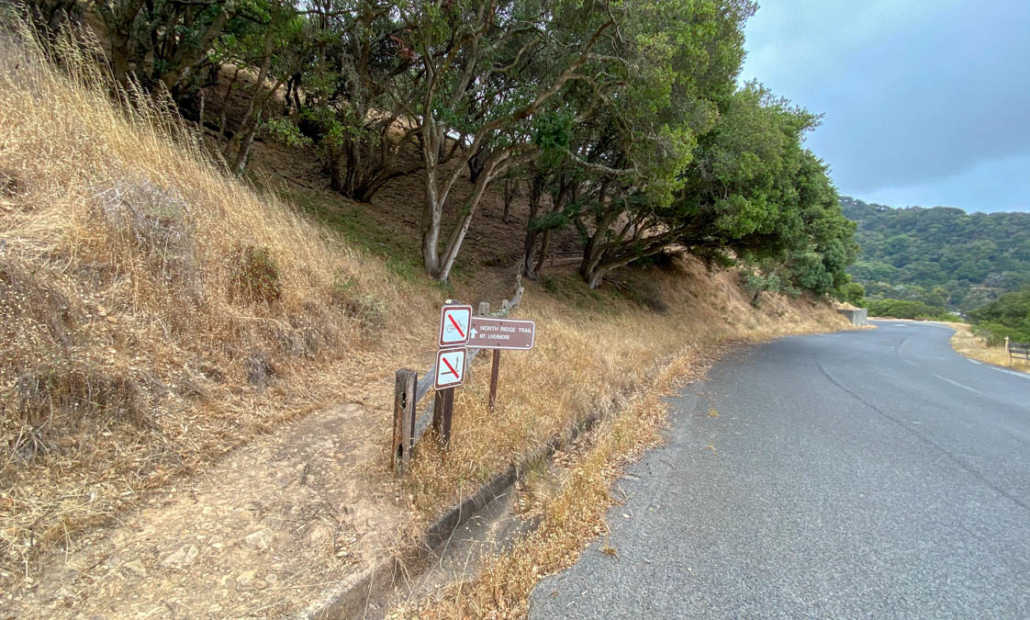 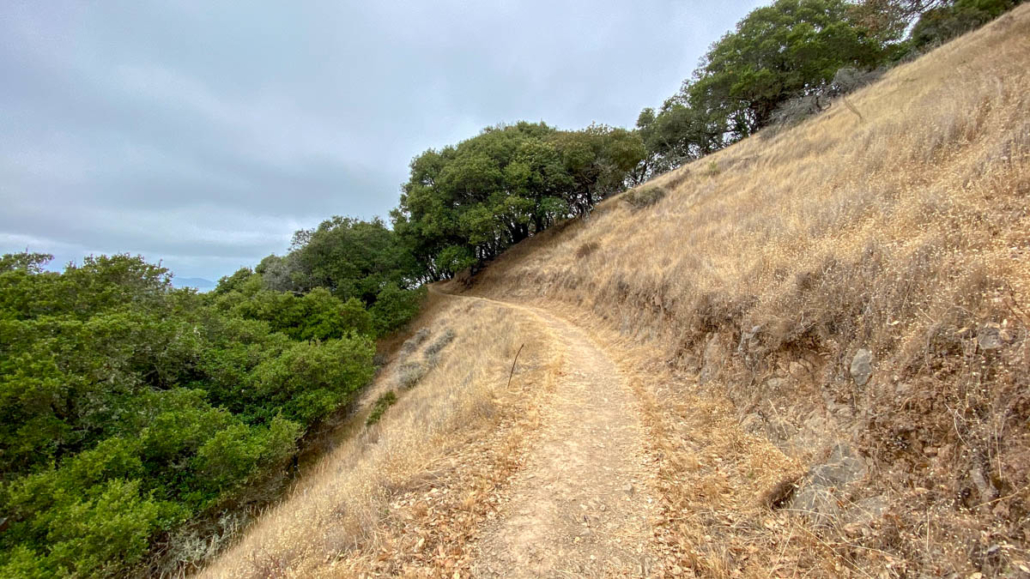 Raccoon Strait, the body of water between between Angel Island and Tiburon, becomes more and more visible as you climb. The strait is named after the HMS Racoon—yes, one “c” in the original spelling—a British ship repaired at Ayala Cove in 1814. 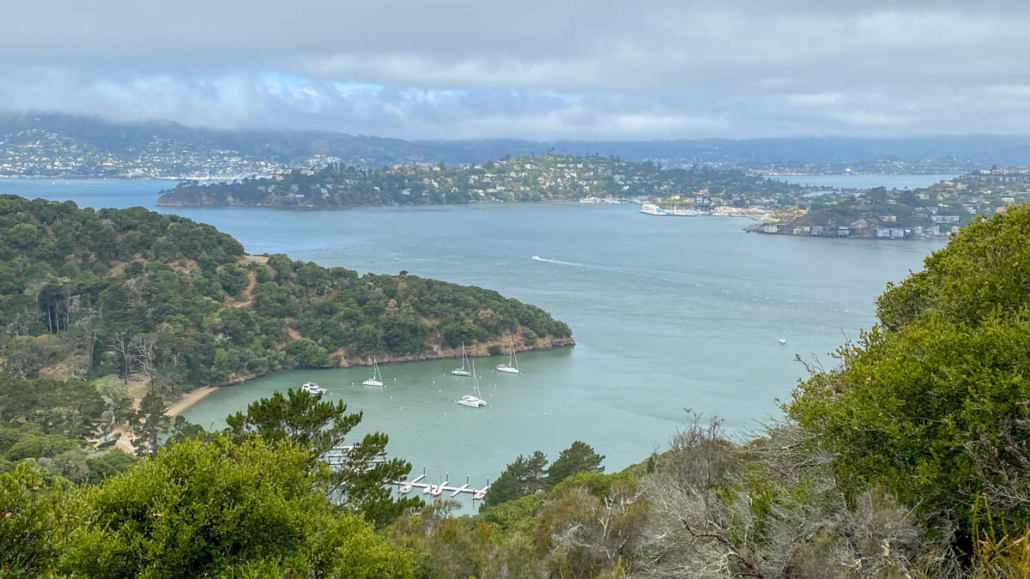 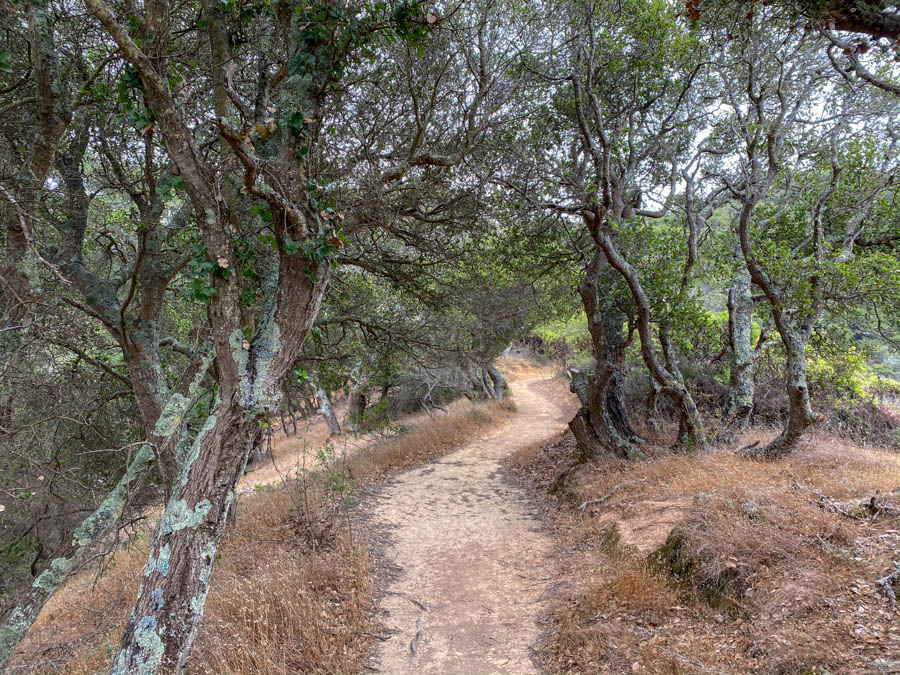 Cross a bike-friendly dirt road at 1.0-mile, staying on the North Ridge Trail towards Mount Livermore. As you emerge into coastal scrub, you can see the gray, antenna-like beacon on Mount Livermore’s summit. 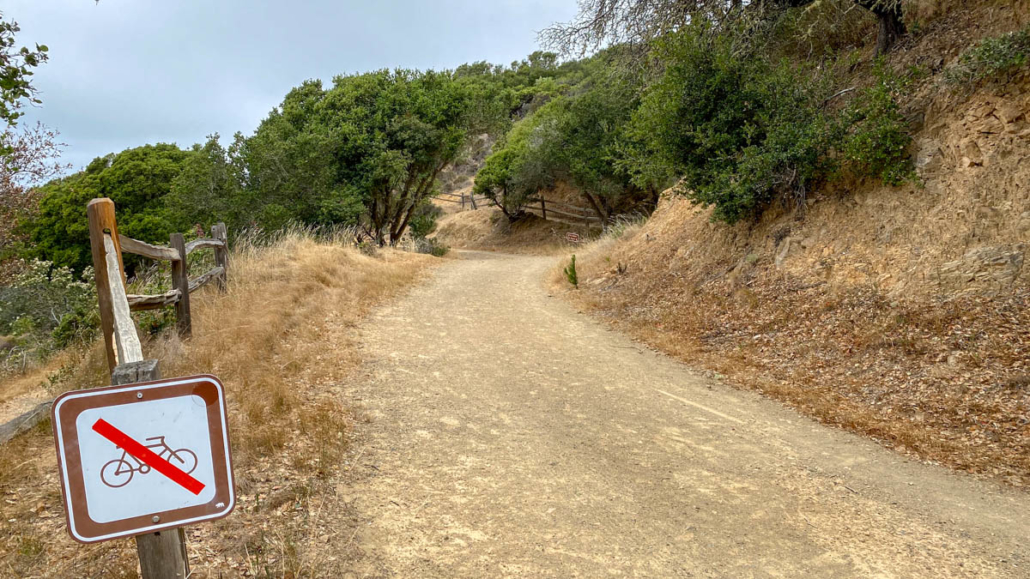 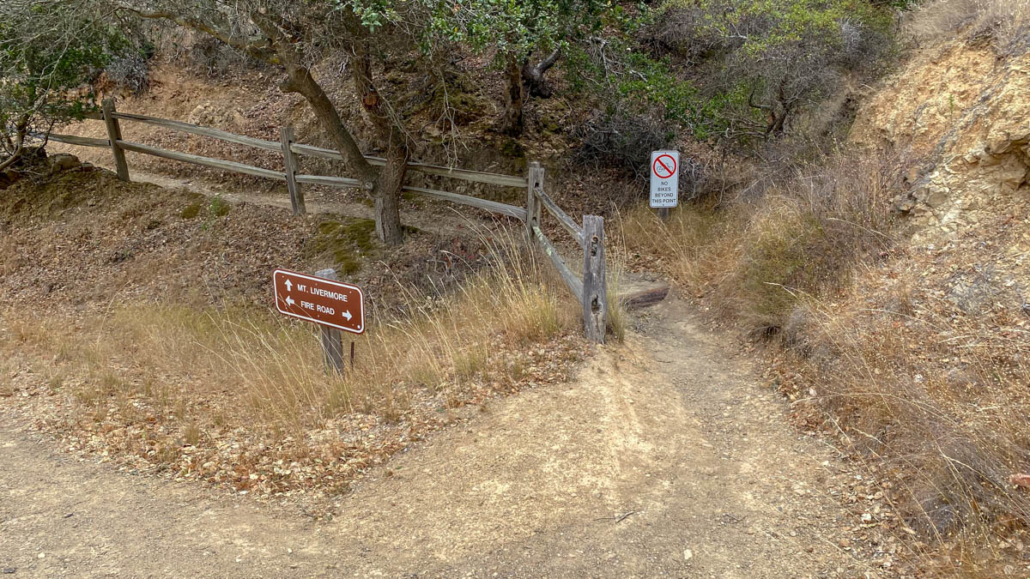 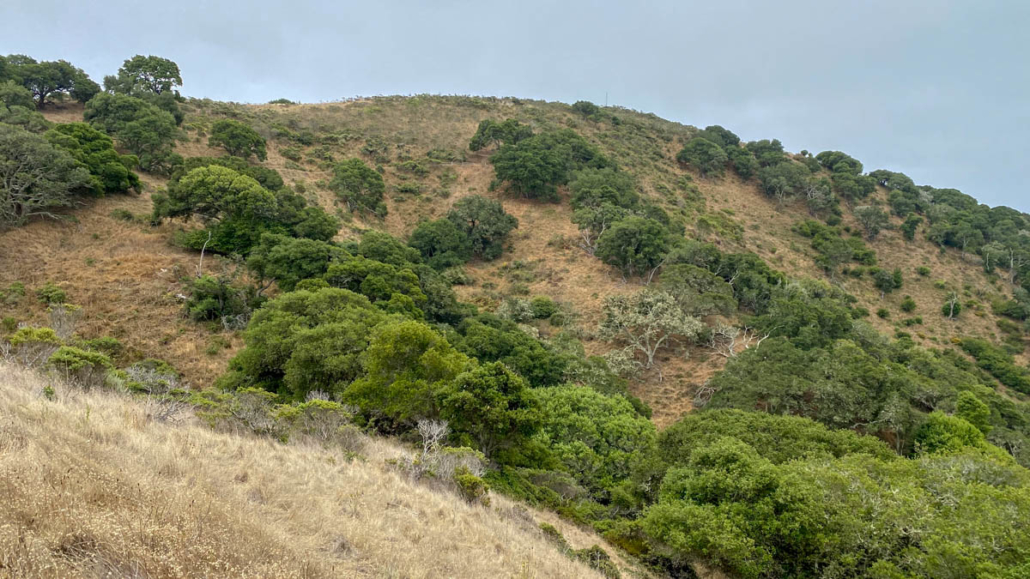 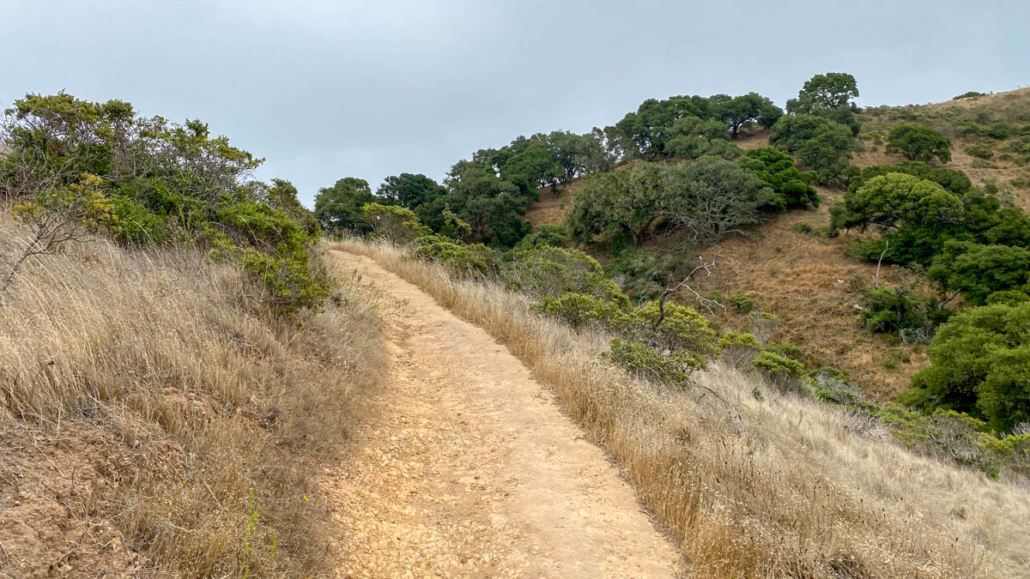 Arrive at a junction with the Sunset Trail at 1.8 miles. Turn right to take the spur to Mount Livermore. You’ll return here to continue your loop. 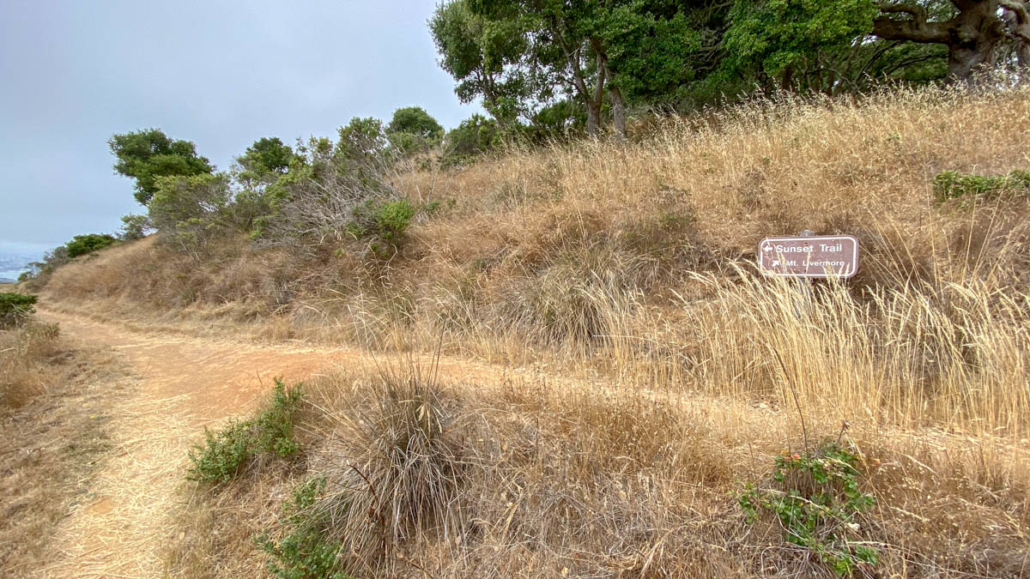 Along the ridgeline, the sagebrush and coyote brush are a green contrast to the aqua bay. High up now on the pyramid-shaped island, your views are gorgeous. To the north, beyond the Tiburon Peninsula, you can see the northern reaches of the San Francisco Bay and the full length of the Richmond Bridge. 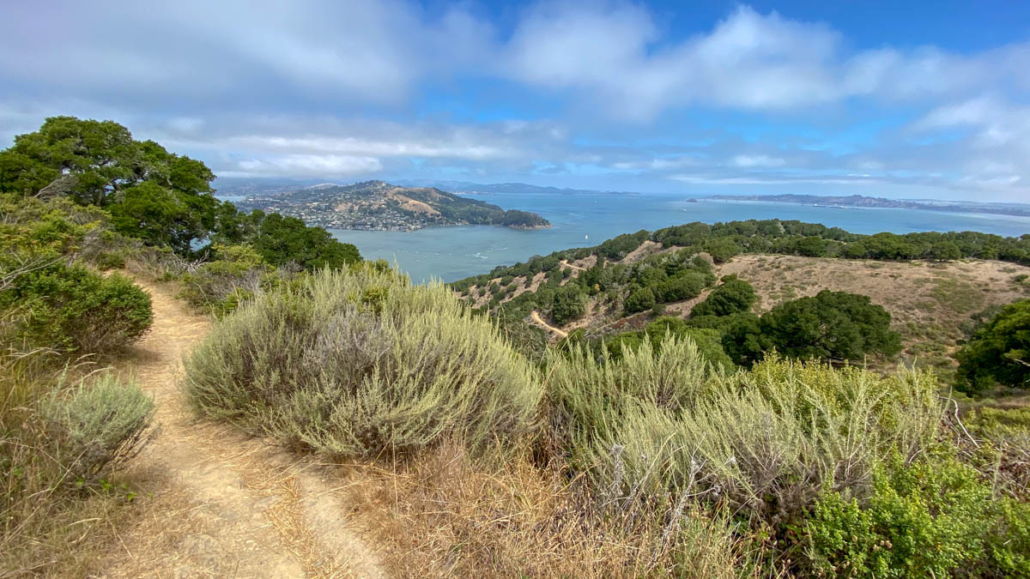 After 0.4 miles, reach the summit of Mount Livermore and her beacon. Mount Livermore is named after Caroline Sealy Livermore, a savvy Marin conservationist who fought for Angel Island to become a state park. Livermore was born in Galveston, Texas in 1885 and moved to Marin in 1930. In the following decades, she became a passionate protector of Marin wildlands, helping establish the Marin Conservation League and helping create Mount Tamalpais State Park and Samuel P. Taylor State Park, among others. She passed in 1968, five years after Angel Island officially became a state park in 1963. 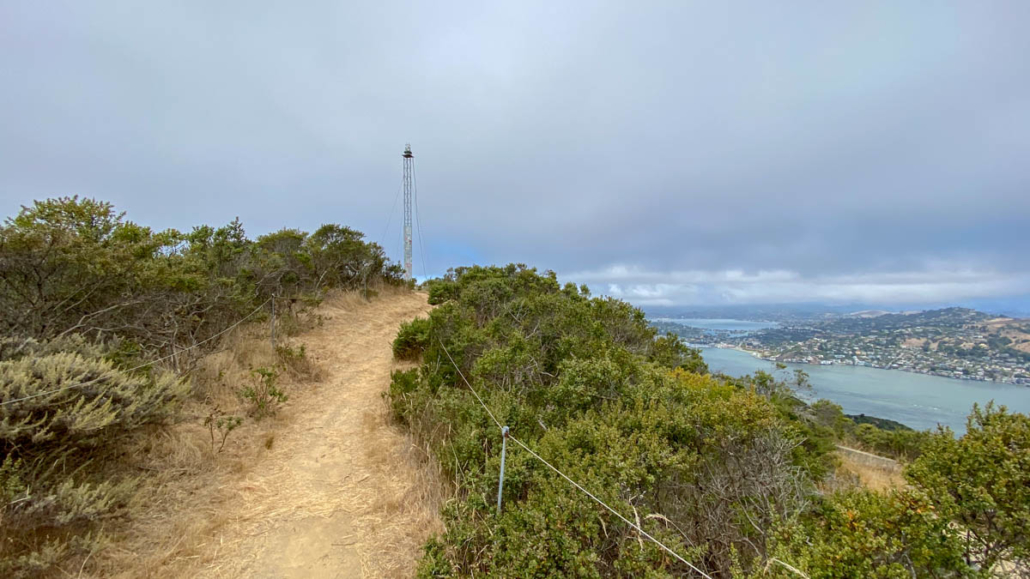 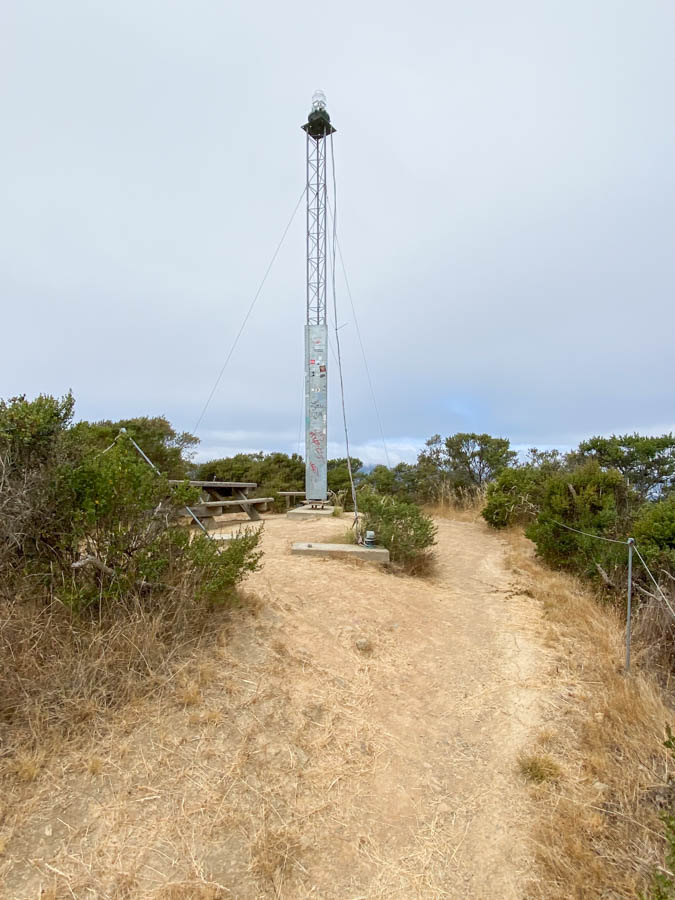 Past the summit, a gently descending trail leads to a windy picnic area. The view is spectacular. Angel Island’s hillsides roll to the water’s edge like a magic carpet. Stretching from the southeast to the southwest are the Bay Bridge, Alcatraz, San Francisco, the Golden Gate Bridge, and the Marin Headlands. 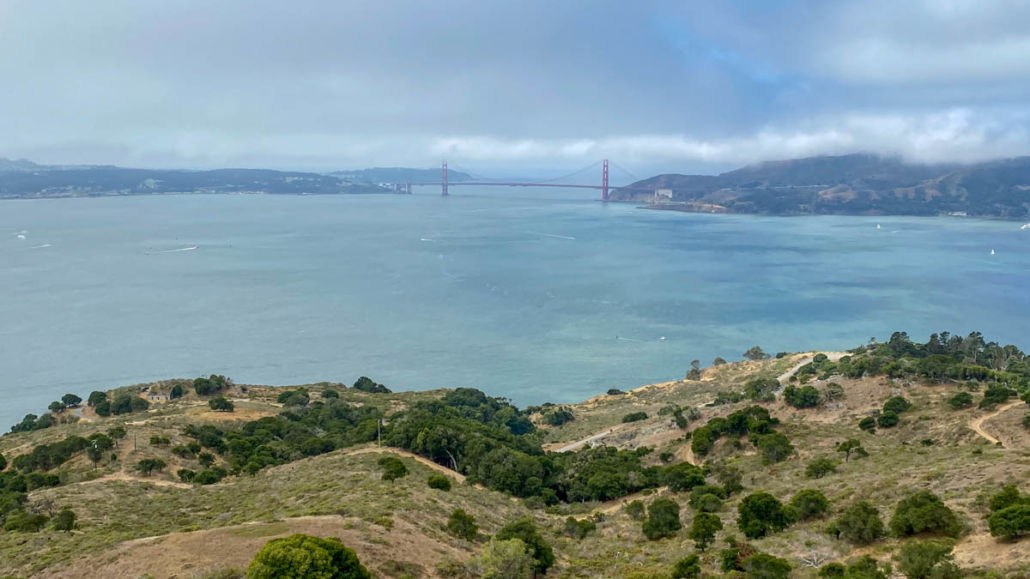 Retrace your steps back to the Sunset Trail junction, and stay straight. After 500 feet, turn right at the 2.6-mile mark to stay on the Sunset Trail. In front of you is Alcatraz, downtown San Francisco, and the faint outline of the Sutro Tower. The trail cuts east through a sunny slope to a dead-on vista of the Golden Gate Bridge. 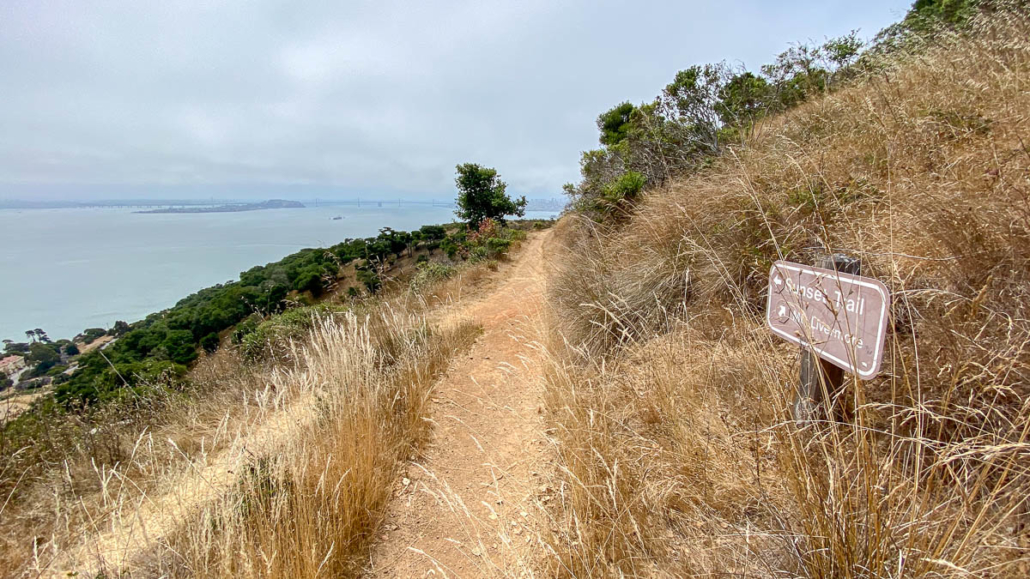 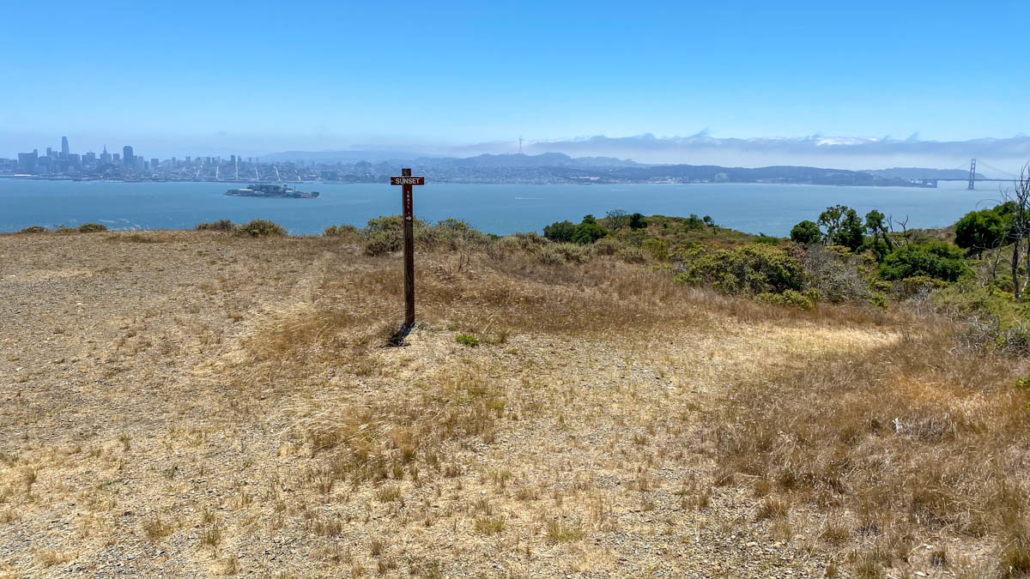 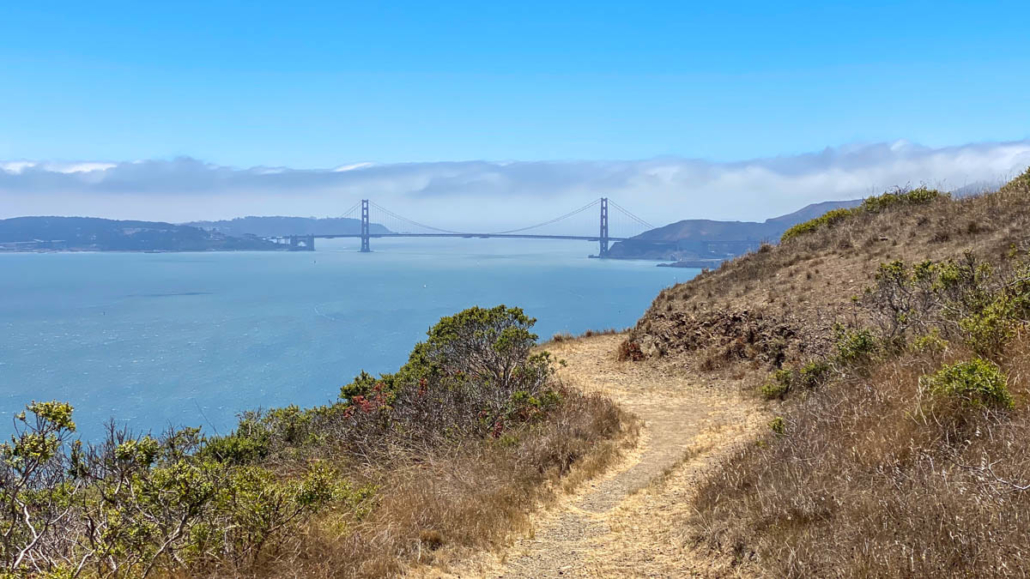 Around the corner is another incredible vista: the Golden Gate Bridge, Marin Headlands, Richardson Bay, and Mount Tamalpais. Belvedere Island juts out between Richardson Bay and Raccoon Strait. Overhead you may see turkey vultures and hawks circling, as well as deer lingering in the bushes.

After this vista, the trail descends back into the trees, a relief after the last sunny stretch. The switchbacks are long and languorous, descending north with pocket views of Ayala Cove. Cross back over the dirt fire road, continuing on the Sunset Trail. 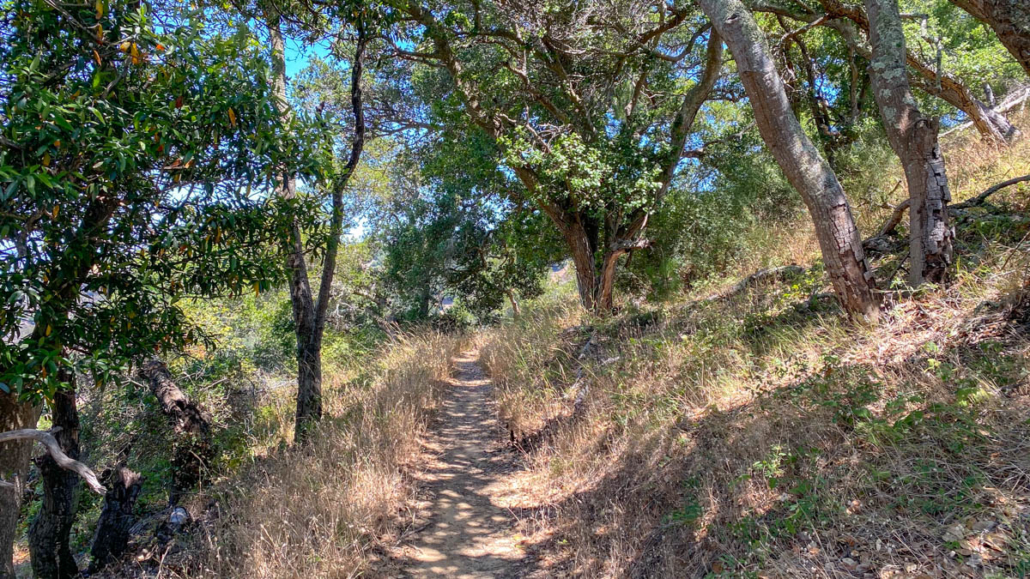 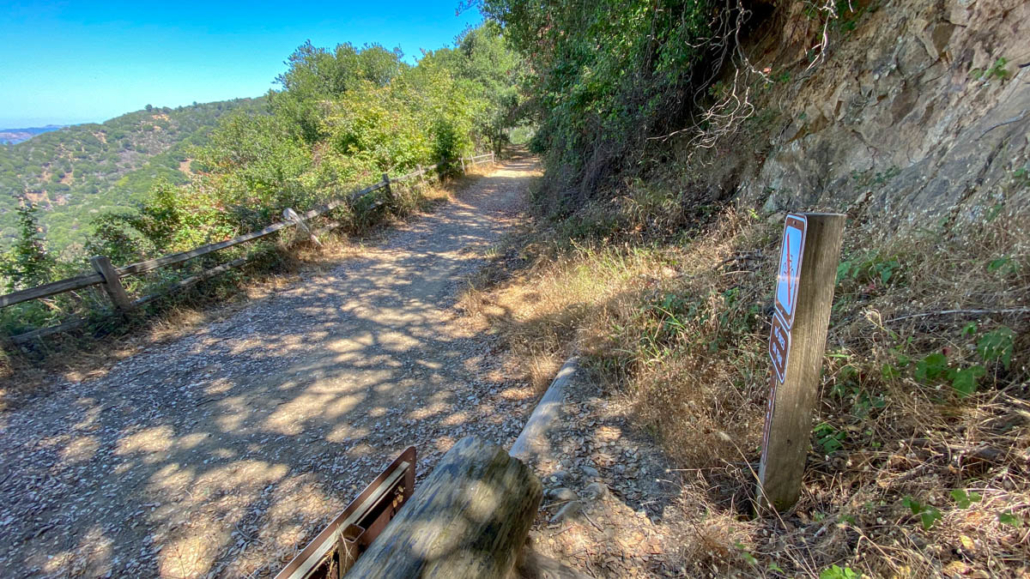 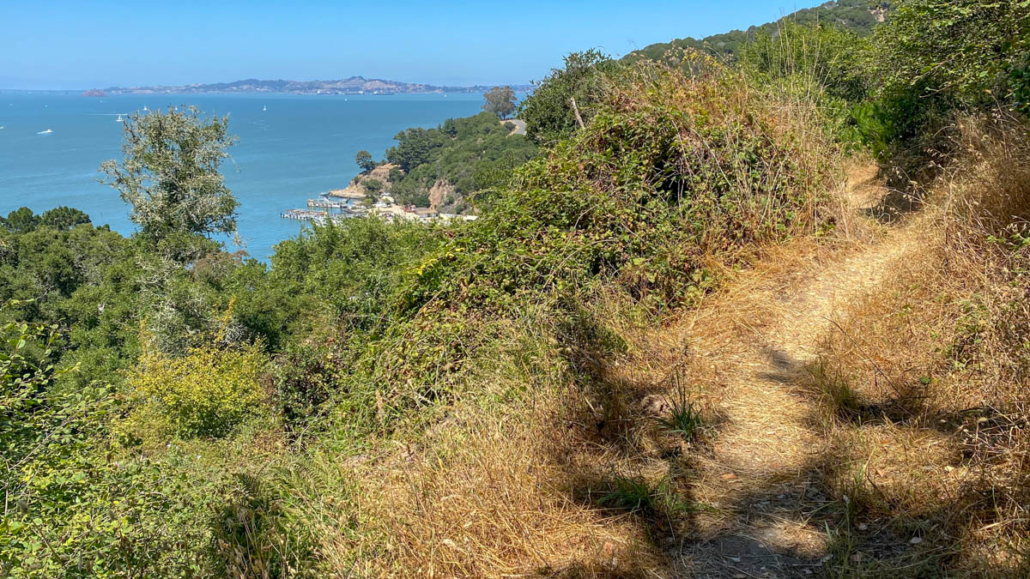 At 4.6 miles, arrive back at the Perimeter Road. Cross it and bear right onto the bike route. On the left is a paved pedestrian road, which also takes you back to the cove. The bike route just has a little bit more of a woodsy, trail-like feel. 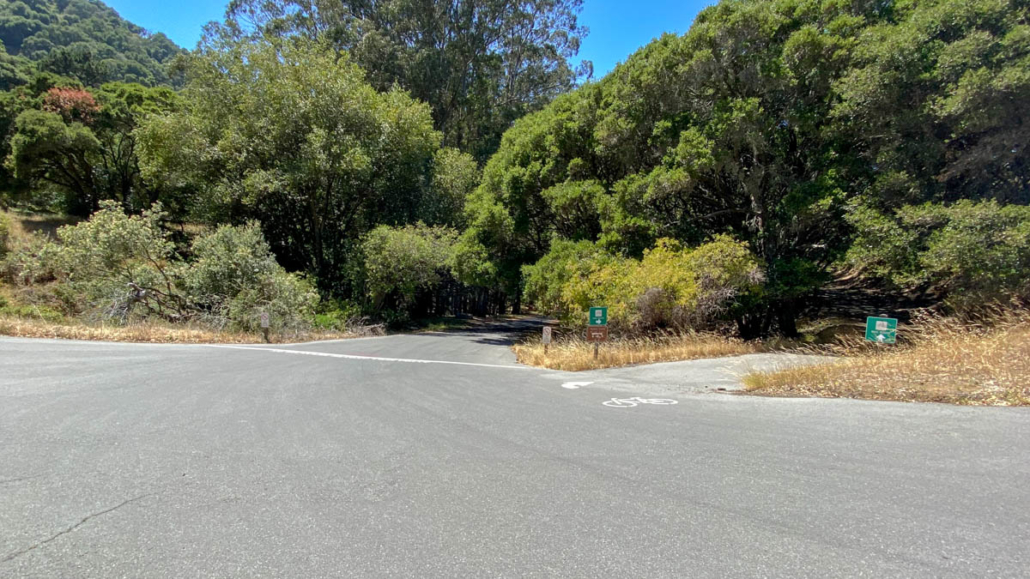 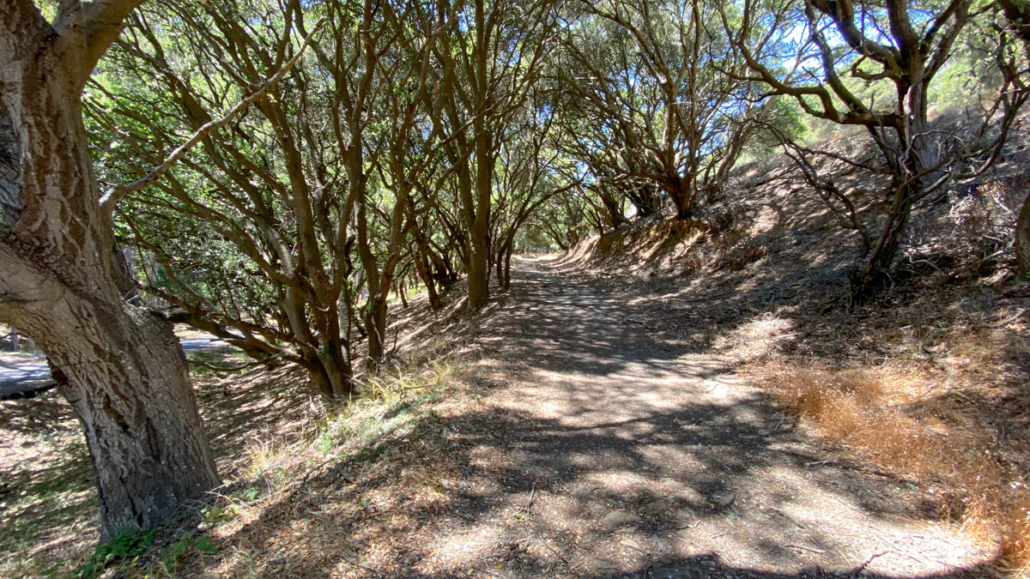 Both trails reconnect at an information display next the Visitor Center. Beyond it are rows of sunny picnic tables with grills. Follow the edge of Ayala Cove to return to the ferry. 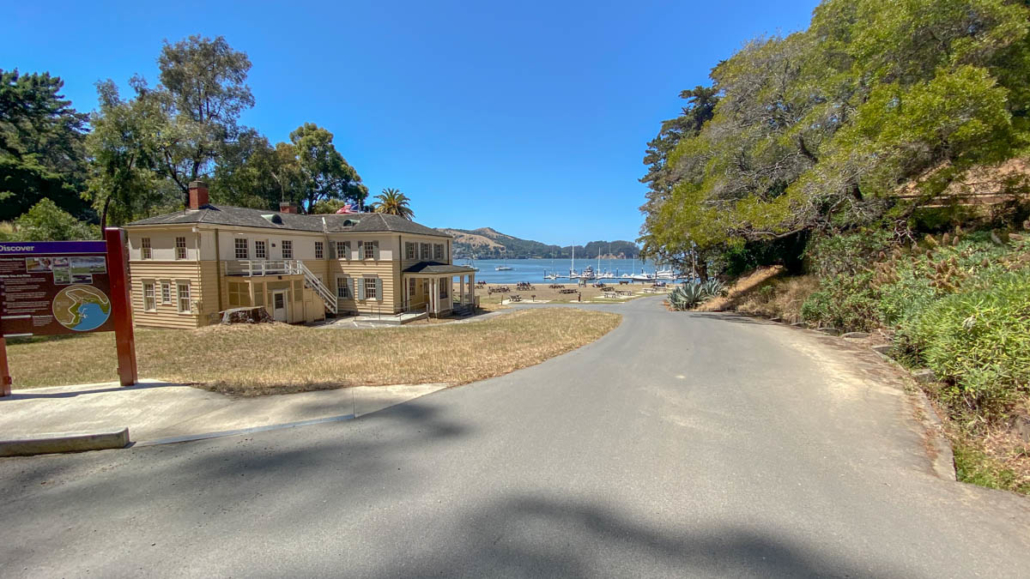 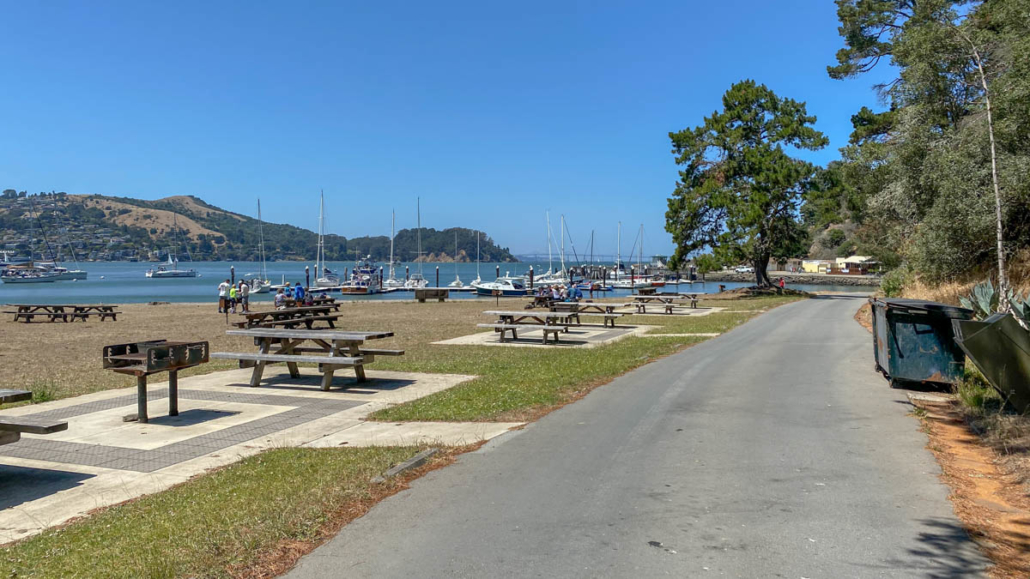 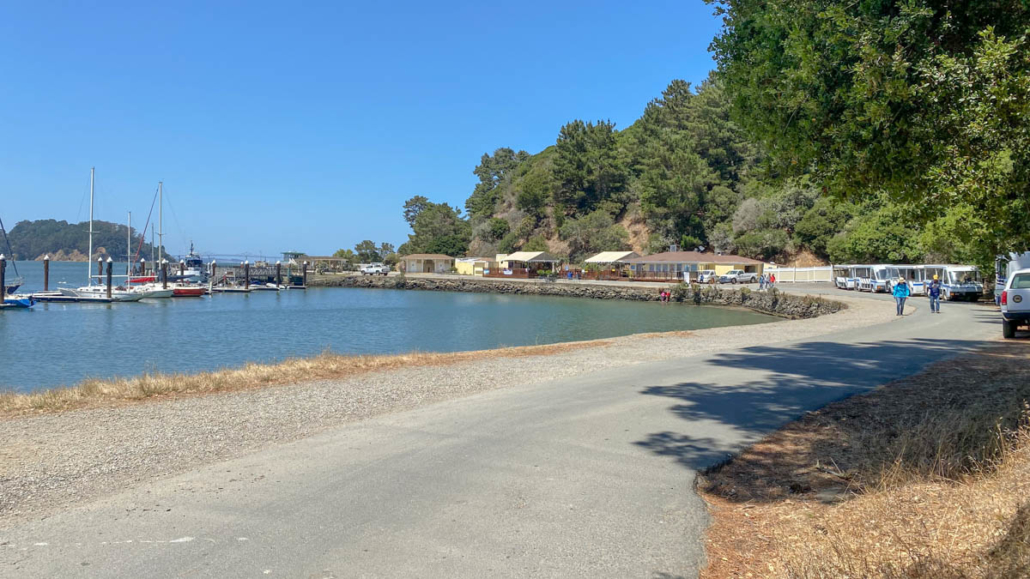 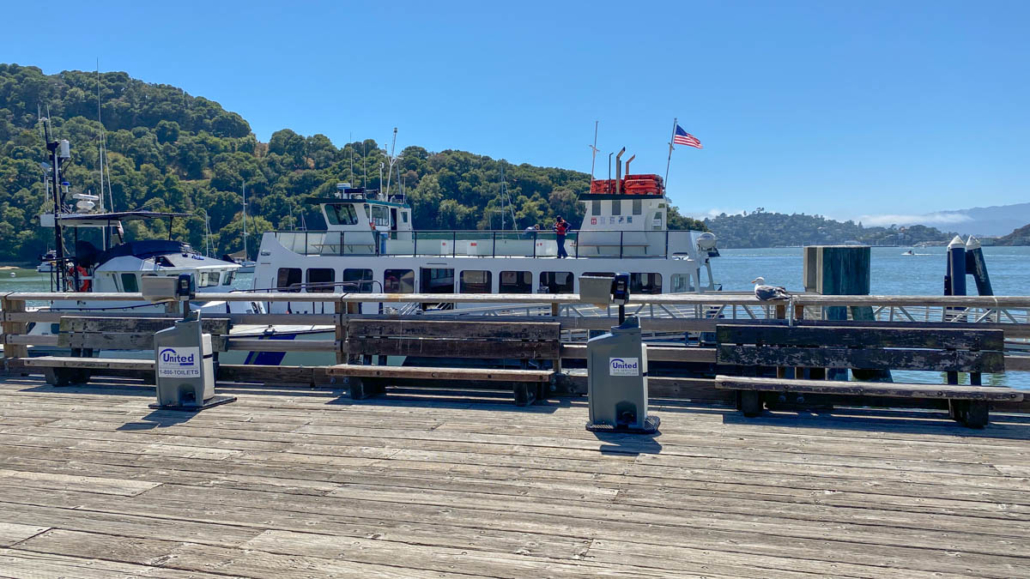 The North Ridge and Sunset Trails are hiker-only single-track trails ascending from Ayala Cove to Mount Livermore. They are clear and partially shady, with sunnier stretches on the upper slopes. The route is mostly well-signed with occasional poison oak. There are wooden stairs on the North Ridge Trail for the first 0.2 miles.

There are four major camping areas on Angel Island: Kayak Camp, Ridge Sites, Sunrise Sites, and East Bay Sites. Sites are hike-in, and near potable water and pit toilets. Most have picnic tables. Camp stoves are allowed, wood fires are not. Reservations are popular and can be made up to six months in advance.

There is no vehicle access to Angel Island. Alcatraz Cruises and Blue and Gold Fleet run ferry service to and from Angel Island in San Francisco. The Angel Island Tiburon Ferry runs a direct route from downtown Tiburon. Boat slips are available on a first-come, first-served basis for private boats.