Angel’s Landing is one of the most famous trails in the National Park System and definitely one of the two marquee trails in Zion National Park. This 5 mile trail takes you from the canyon floor up a narrow, winding trail to the prominent overlook of Scout Lookout. From there, a half-mile of vertigo-inducing, chained trail along the cliffside takes you to Angel’s Landing. Even those who don’t plan on heading all the way to the Landing should do this trail – the views from Scout Lookout are phenomenal – and if you’d like you can also continue further on the West Rim Trail into the solitude of Zion’s backcountry. A must-hike.

When you get back from Zion, there are two questions every hiker will ask you: “did you do the Narrows?” and “did you make it to Angel’s Landing?” The Narrows is a multi-day canyoneering and backpacking adventure that requires a bit of planning ahead of time to do. Angel’s Landing is a steep but surprisingly accessible trail that just happens to end with a terrifying half-mile clinging to the side of an exposed rock fin.

To be fair, most of the trail isn’t that scary – and for a lot of people, even that last half mile will seem like a piece of cake – but we’re a litigious society so we have to put up all sorts of warnings everywhere to make sure we can’t get sued. Naturally, then, the first thing you see when you start on this trail is a sign telling you how many people have died on it. 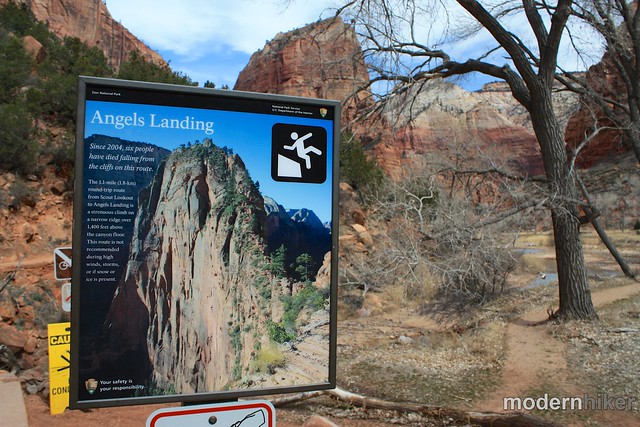 Cross the bridge over the Virgin River and keep right at the trail junction to head toward Angel’s Landing.

The first section of the trail starts out innocently enough – just a nice, mostly level stroll along the river bank with pleasant views of Angel’s Landing to the north. 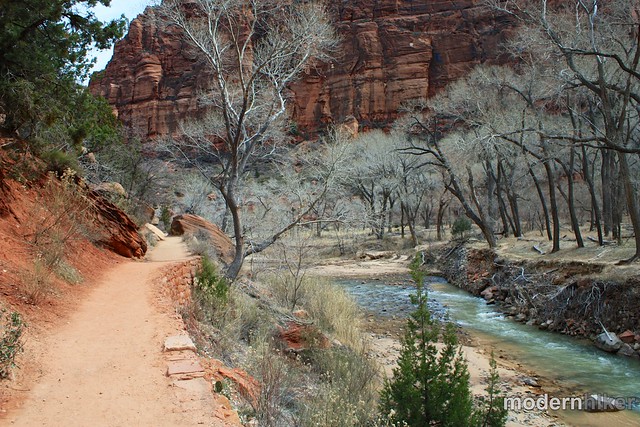 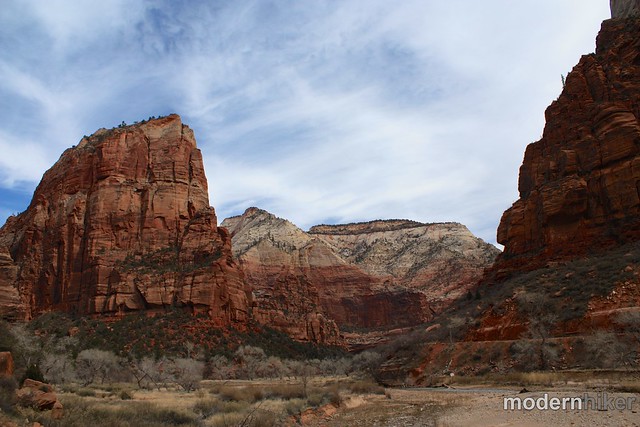 This pleasant little walk doesn’t last for long, though – if you look up at the West Rim Wall, you’ll spot Refrigerator Canyon tucked in right next to Angel’s Landing … and you’ll also spot the steep trail blasted into the cliff’s wall, too. 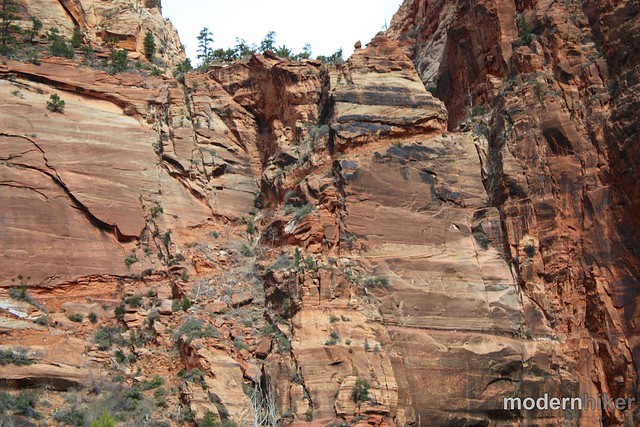 The trail continues at a mild incline for the first three quarters of a mile with some gorgeous views of the valley, and that’s when you hit the first set of switchbacks.

These paved, tight turns will take you up (and through) the wall of the West Rim and into the mouth of Refrigerator Canyon. 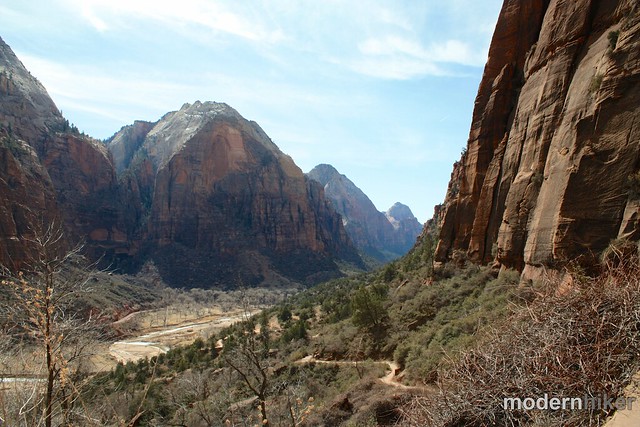 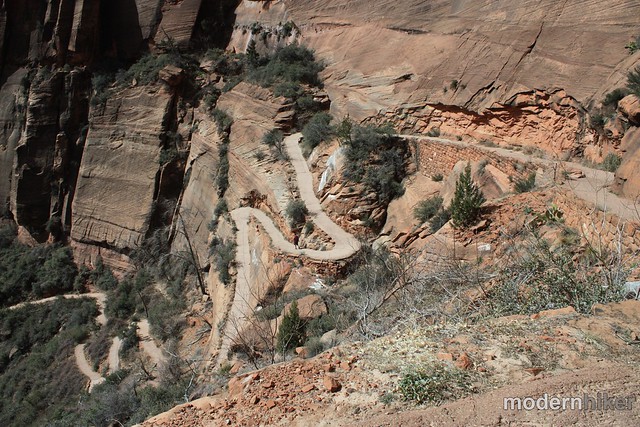 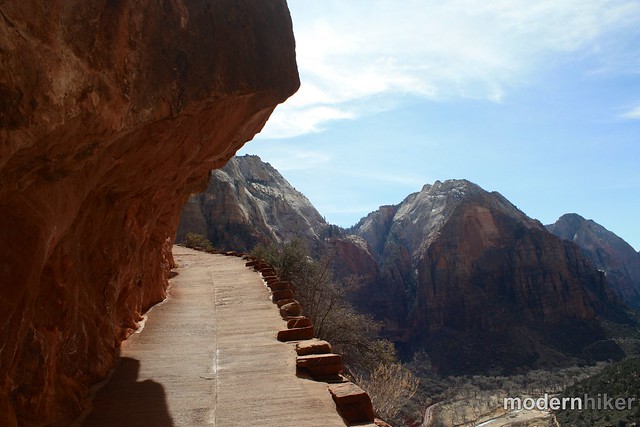 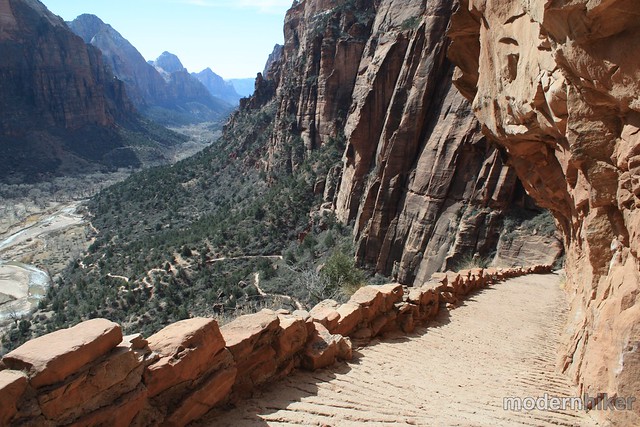 Once inside Refrigerator Canyon (and yes, it IS a bit cooler up here), the trail takes a leisurely course along the canyon floor. Douglas firs have staked their claim to this ground and their presence makes a nice contrast with the red rock canyon walls. If you time your trip to be in this area in the mid-afternoon (2-3PM), you may be able to catch Refrigerator Canyon’s “Golden Hour” – a time when sunlight from one wall is reflected onto the opposite one. 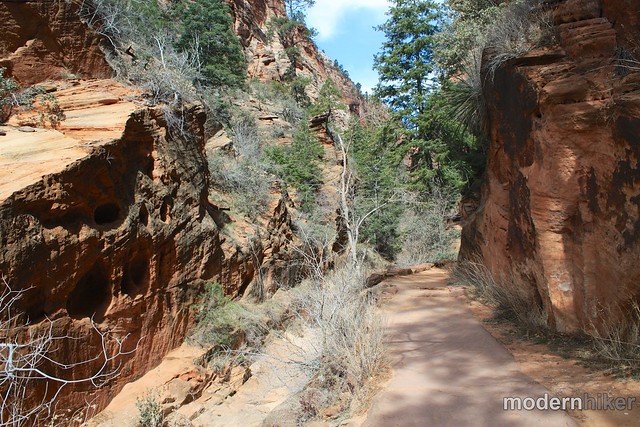 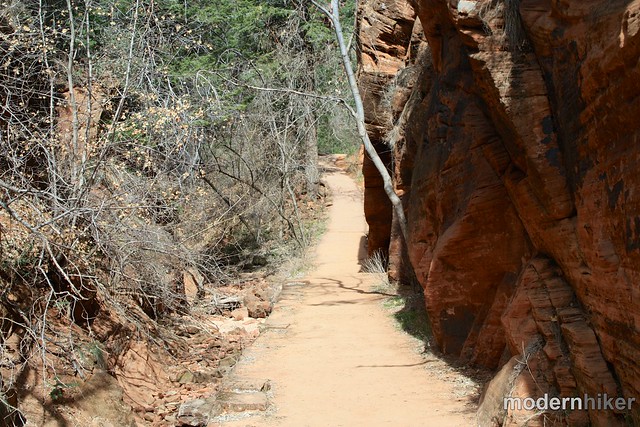 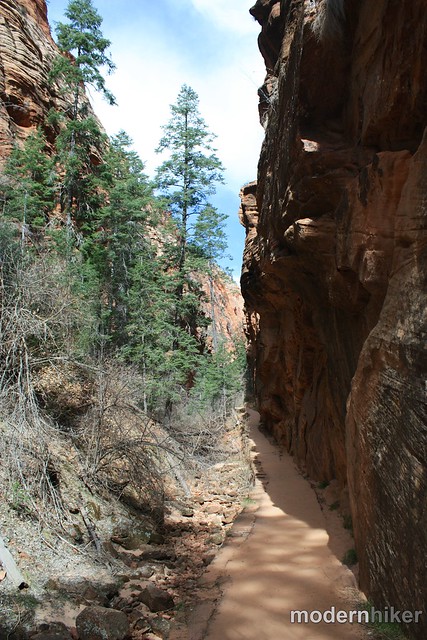 The trail stays fairly flat for about 0.4 miles inside Refrigerator Canyon before it hits another round of switchbacks. If you’re at all interested in the art of building trails – or even just the insane amount of work that goes into trailbuilding – you will gain a tremendous amount of appreciation for the people who put their backs into this route.

At the end of the canyon, the trail doubles back on itself before putting you face to face with Walter’s Wiggles – a steep series of 21 switchbacks named for Walter Ruesch, the first superintendant of Zion National Park. 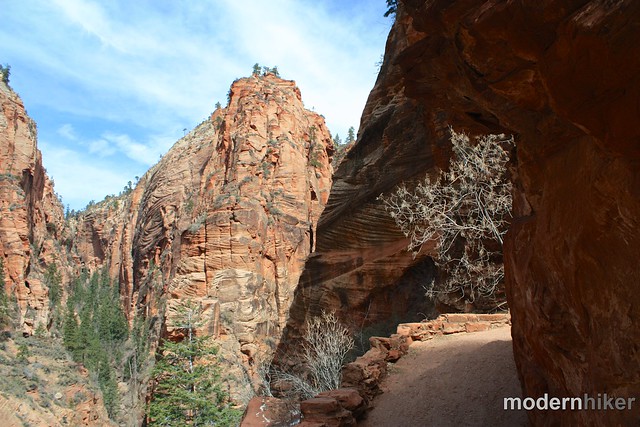 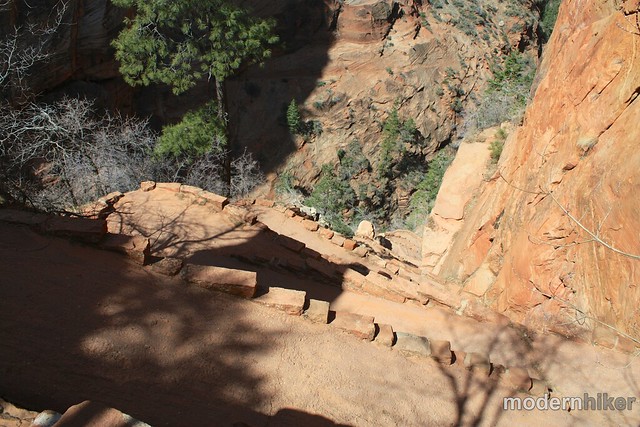 This is by far the steepest section of the trail, but just keep your head down and plow ahead and you’ll be fine. The trail is paved at this point so you really just have to get yourself into a steady rhythm and it’ll all be over before you know it!

At the top of the Wiggles, you’ll come out onto the small plateau of Scout Rest. From this perch 5343 feet above sea level, you’ll have fantastic views of Zion Canyon’s Big Bend just north of Angels’ Landing and the rest of the Canyon to the south. This is a great place to have a rest or lunch before steeling yourself for the Landing itself, heading into the park’s backcountry on the West Rim Trail, or just turning around and heading back to the trailhead. 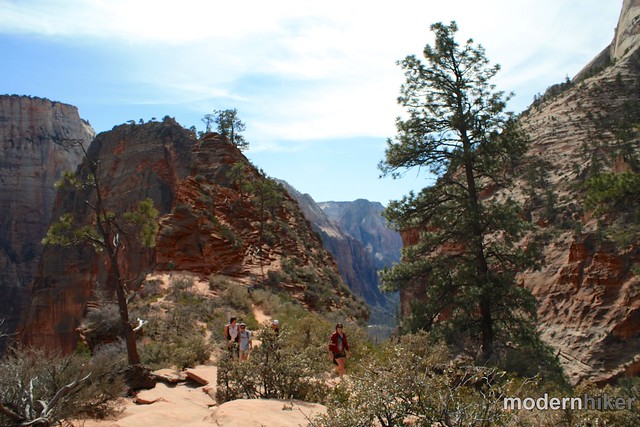 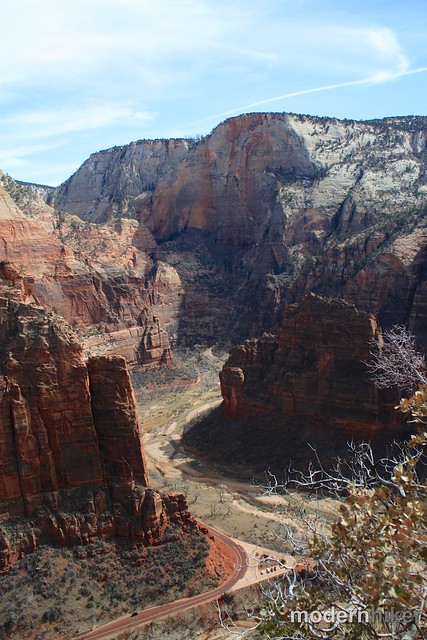 That said, I have heard from many people that the trail to the Landing isn’t as bad as it looks, and maybe I’ll do it the next time I visit the park and am feeling a bit more adventurous.

For a great account of someone who balked at the initial ascent but came back to conquer the Landing later, head to Kolby Kirk’s tale of his summer adventure from a few years ago … but be warned: his Go-Pro fish-eye lens videos of some of the more terrifying sections of trail played a large role in keeping me from heading up there myself!

*unfortunately my GPS went a little insane in Refrigerator Canyon so I didn’t get a usable track for the GPX data or Google Earth. Fortunately, this is the most-hiked trail in the park and information is out there. Here is a great site with detailed pictures of the last half mile and a GPX file to download.

Excellent. Most of the trail is paved and very well signed. The notorious final half mile is extremely rugged with very steep drop-offs and chain holds. It is not recommended for anyone with even the most remote fear of heights.

For most of the year, Zion National Park runs a shuttle service in the valley and private cars are not allowed. Get off at the Grotto stop and cross the street toward the bridge. This is the trailhead. If you're visiting during the off-months, there is a small amount of parking near the Grotto stop.

All the times and distances are round-trip. For this one I didn't make it all the way up so its just to Scout's Lookout. I usually add a bit of time to my actual hiking times - this trail is pretty steep in a lot of places so I added some "breathing break" times :)

Casey, great write up. Looking forward to doing this with my family shortly. I am curious about the time and distance that you have noted. Was it 5 miles round trip and 4 hours total all the way to the peak, or just to Scout's Lookout? Can you clarify, how far/long was it just to Scout's lookout?

Just went here this last week. It is definitely a bit scary on that last half mile. I would highly suggest if you are the type of person, like me, that considers this hike daunting, try to summit earlier in the day - as half of the fear comes from standing in place looking around you while you wait for hikers to approach from the other way (there are a handful of bottlenecks). The less traffic the better - just get your tunnel vision going and tackle the next five feet at a time. Also - coming down worried me the whole time going up but turned out to be ok - I did sit down on my ass a couple times and scoot though! Narrows is seriously amazing - in fact, in my opinion a much more novel hike than Angel's Landing. I didn't rent the gear - but do think the sticks would have been wise.

Nothing much to add other than - great writeup Casey! And yes, good memories...

Wow, that brings back some memories. I was there about ten years ago, on a trip that included the Grand Canyon. I definitely suggest going back and doing the last section, but only if you're comfortable. You could always do what they do on the trails in Italy: wear a climbing harness, and carabiner yourself to the chain-rope!

I was just in Zion a few weeks ago and also did the hike up to Scouts Lookout. My brother and 10 year old nephew made it all the way to Angels Landing and I almost regret that I didn't do it. I tried the first bit with the chains and I thought I'd probably make it up OK, but wouldn't be able to get back down (and definitely didn't want to need rescuing or cause the park to need to update their sign). My brother said that the beginning is the worst part and there were only a few areas that were really scary. But the view from Scouts Landing were spectacular! Love the write ups from Utah, especially since I was just there!

No goading registered :) - From what I've heard the ascent to the Landing LOOKS much worse than it actually is - but on this day, I had such a great hike up to Scout Lookout and was enjoying the day so much that I just wanted to keep that feeling instead of replacing it with the inevitable nervousness that would have come had I tackled the Landing. So I had a nice lunch, met some very friendly travelers, and then hiked back down to do a few more trails before sundown.

I'll buy that, Casey. After all, my pursuits of adrenaline tend to stop way short of hang gliding, heliskiing, wingsuiting and the like. Heck, I was one of the earliest in my old brain cage-wearing cycling club (if they wore any protective headgear at all) to adopt the hard-shell helmet! As with all things, I've always operated on the "moderation is key" principle, and therefore I tend to be more circumspect than some when exploring the wilderness. Like you, I tend to find hiking a very meditative pastime, so I get where you're coming from. So don't let me goad you unnecessarily.

The urge to summit "because it's there" is, I've realized, my core motivation - despite mild bouts of vertigo. But then, the one time I summited Angels Landing, our small group had a fearless 12-year-old boy and 9-year-old girl whom I simply could not disappoint. ;^)

The Narrows isn't just a backpacking trip, there's also a nice 3-4 mile there and back starting at the Temple. Half in the river, half on the edges you get to see some nice canyon walls further up before it turns to wilderness area. Definitely rent the canyoneering shoes and a staff from the outfitter in town, it really makes the hike nicer. I saw small kids and tourists doing it so its not very hard.