A 7.6 mile round trip to the top of the largest cascade of Chilnualna Falls. This low-elevation, steady uphill trail can get pretty warm in the sunny summer months, but you’ll have a few opportunities to cool off from the cascade mists or at swimming holes off the main trail. This falls along this hike are not quite as breathtaking as Vernal or Nevada Falls (but they’re still beautiful!), but this trail is much less crowded than anything in Yosemite Valley and you might even get a few miles to yourself when you’re hiking. This trail can continue to a pool near the top of the upper falls if you’re up for it, and can even be used for backpacking further into the Park.

If you’re looking for waterfalls, Yosemite National Park is a good place to be. Not only does it have the tallest waterfall in North America, but pretty much everywhere you look in the Valley you can see a dramatic, breathtaking cascade. Unfortunately, you’ll also probably see a huge throng of tourists, especially at the trailheads closest to the Valley floor’s road system.

If you’re in the mood for slightly smaller waterfalls and significantly smaller crowds, I recommend heading south from the Valley into the Wawona area for Chilnualna Falls. This was my fourth time in Yosemite since I moved out to California and only my first time hiking near the southern end of the park – and I’ve got to say I was pretty impressed.

The trailhead begins near the end of Chilnualna Falls Road. There’s a dirt lot on the south side of the road. Follow the well-marked signs and look for the trailhead on the north side of the road just up a small hill. You’ll see a sign marking a foot trail and a stock trail – they’ll both meet up in a short distance, but unless you’re riding a mule, take the foot trail – it’s much prettier. 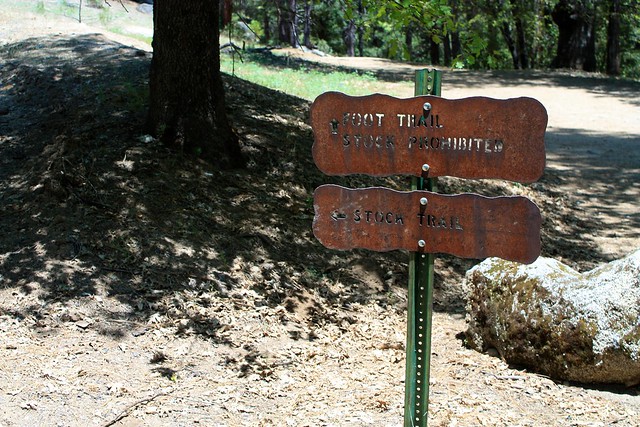 The first 0.3 miles of the trail follow very closely next to the lower cascades and – to but it mildly – are gorgeous. The trail is steep, but beautifully made – stone steps meander their way across ledges and through forests, often in full view of the raging water nearby. There are even a few areas where you can hop off the main trail and bask in the mist of some of the larger drops, too. 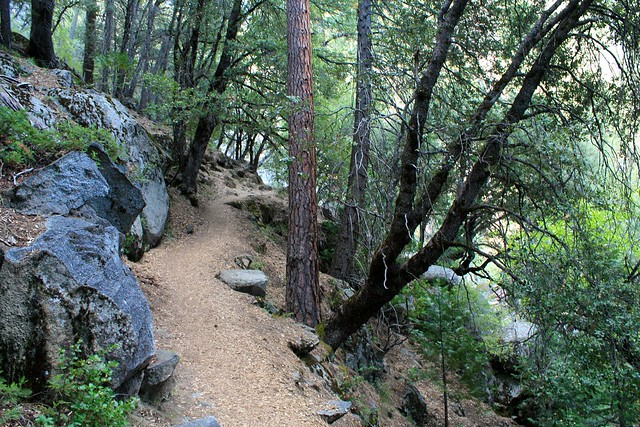 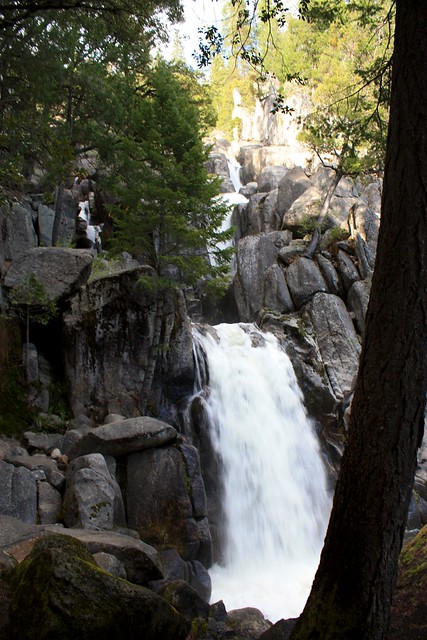 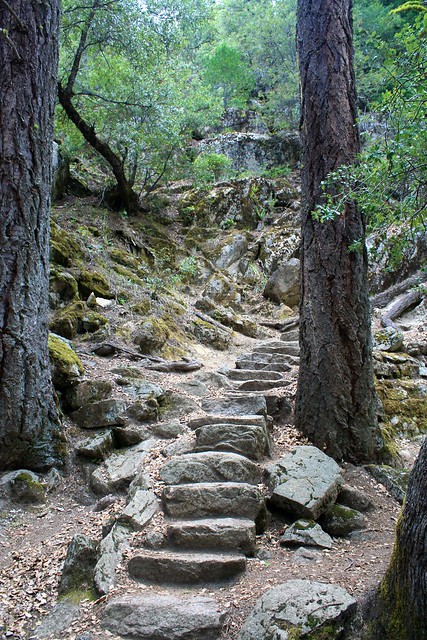 Enjoy the shade and water while you have it – before the 0.3 mile mark you’ll rise out of the trees and relative cool of the mist shadow from the cascades and meet up with the stock trail at this junction. As you can see from the sign, this trail can take you pretty far into the park if you’ve got the energy. 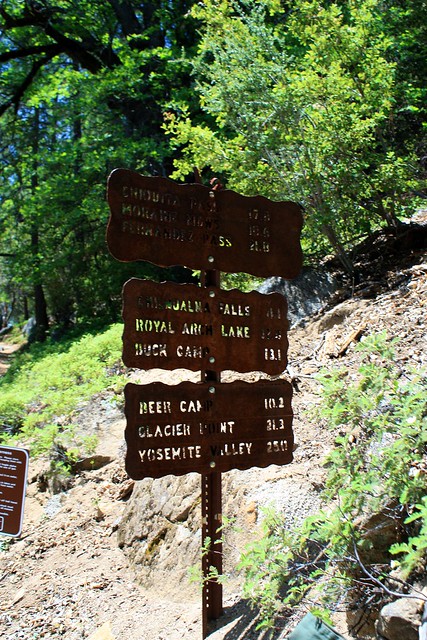 And interestingly, the lower portions of this trail don’t really feel like you’re in Yosemite. In fact, if you keep your eyes to the trail, you might think you’ve stumbled onto one of the higher altitude trails in the San Gabriels … but as soon as you peek through the trees and get a glimpse of the valleys and granite mountains surrounding you, you’ll remember exactly where you are. 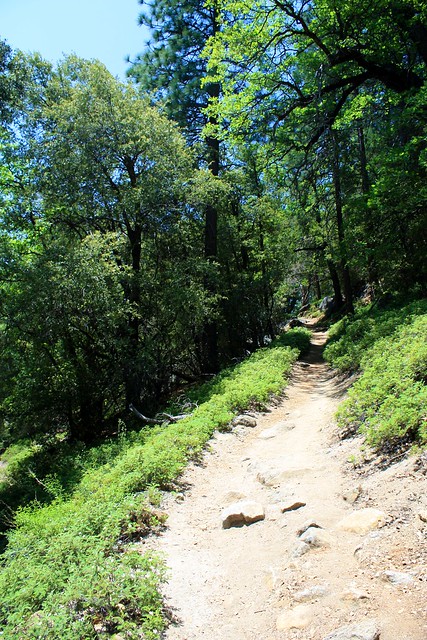 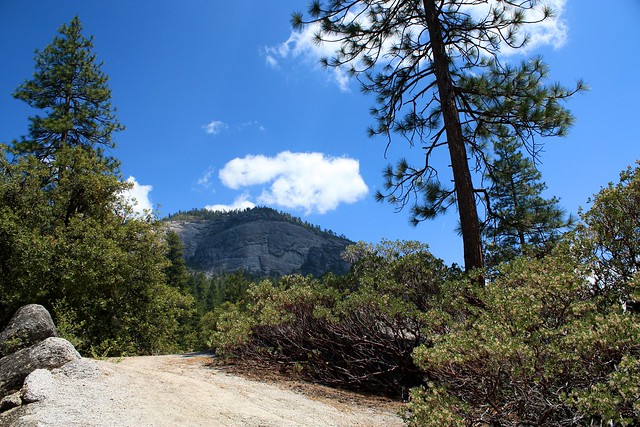 As the trail works its way upward with the Wawona Dome in view (the large granite formation pictured above), you’ll note the trail leaves the San Gabriel-esque manzanita and shrubs of the lower elevations and starts to look much more alpine: 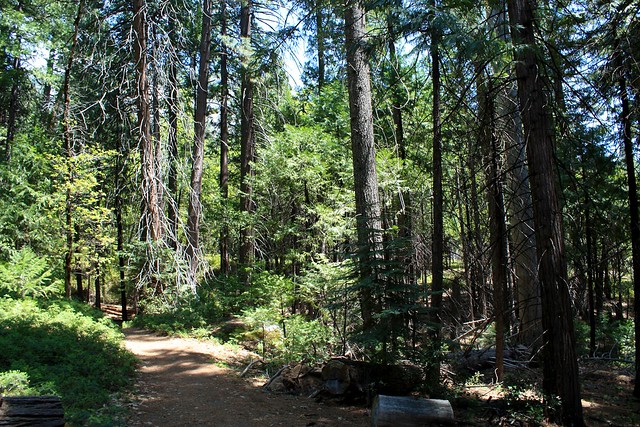 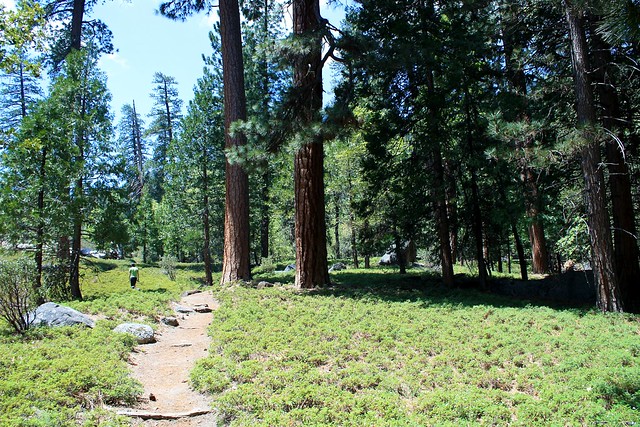 While the tree cover does provide a good amount of shade, you are on a nonstop steady incline the entire time you’re headed to the falls, so be sure to bring some extra water. Early on in your ascent, the trail does still meander fairly close to Chilnualna Creek. Occasionally you’ll see short use-trails leaving the main trail to a few swimming holes in the creek. The trail does leave the waterside for most of the route up, so if you’re feeling toasty and want a little dip in some ice water, take the chance when you can.

After straying from the creek for a while, you’ll eventually be able to hear the tallest cascade of Chilnualna Falls … but it’ll be tough to see it. The 240 foot drop in the series of cascades is mostly hidden, as it pours basically through a rock chute to the ground. You can only barely make out the top of it in this photo. 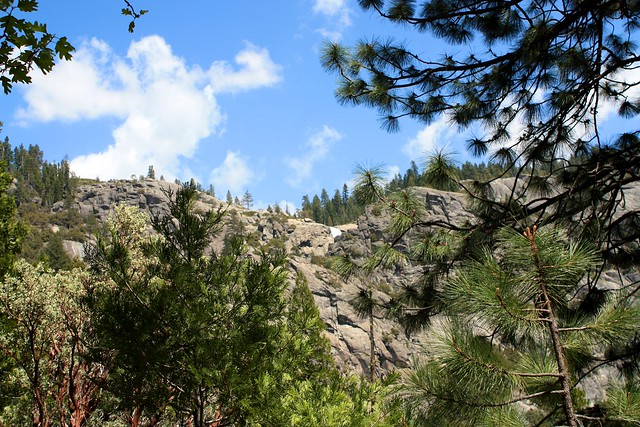 If the top of that cascade looks pretty far above you right now, you’re right – so get ready for even more elevation gain and keep heading on upward.

Soon, the trail leaves the shaded pine forest and cuts directly into the rock of the cliff. This is a pretty fun part of the hike … unless you’re terrified of heights. 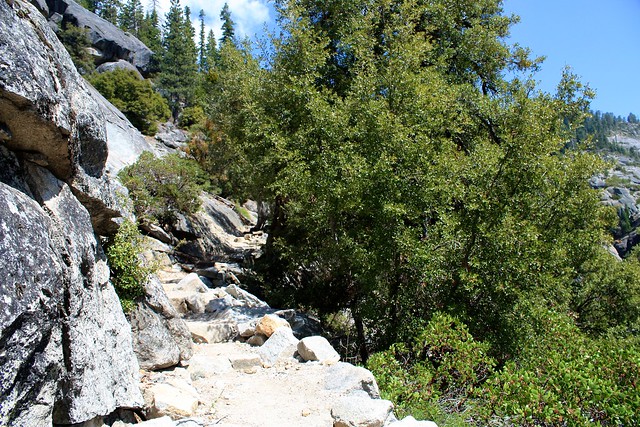 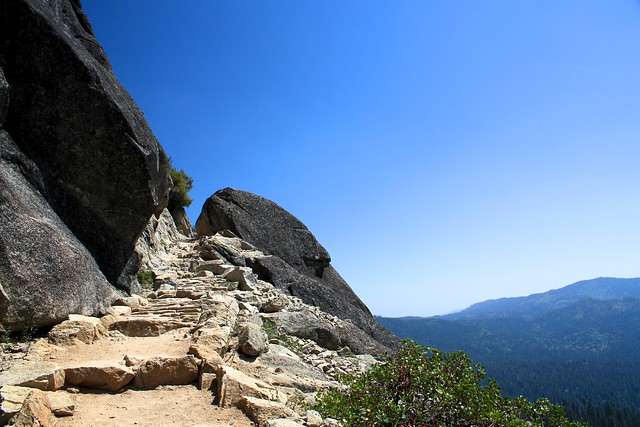 This stretch of trail actually reminded me a bit of the final push to the summit of Mount Whitney, but with a drop-off only on one side. Honestly, the trail is wide enough where you won’t ever feel like you’re about to fall – so don’t worry about it.

When you get to the top of that huge cascade, the view of the water will unfortunately not be much to look at – again, just because of the way the waterfall cuts through the rock, you still won’t be able to see most of it. 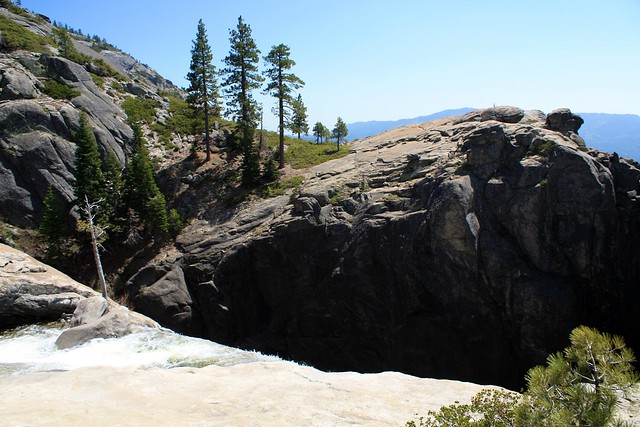 There are a few small pools in the stretch of creek here that you can splash around in, or you can continue on the stone stairs as the trail loops around another bump to get to the top of the next cascade. 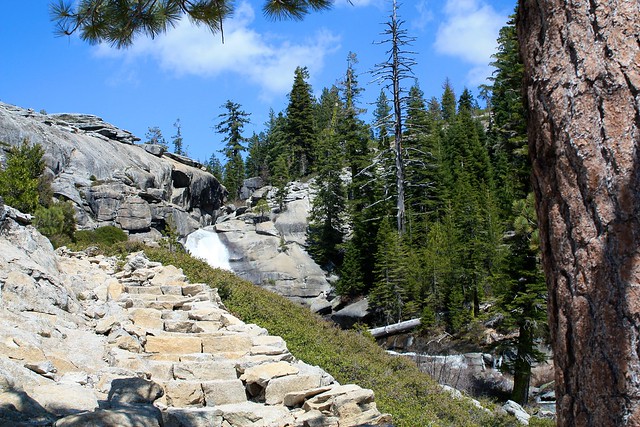 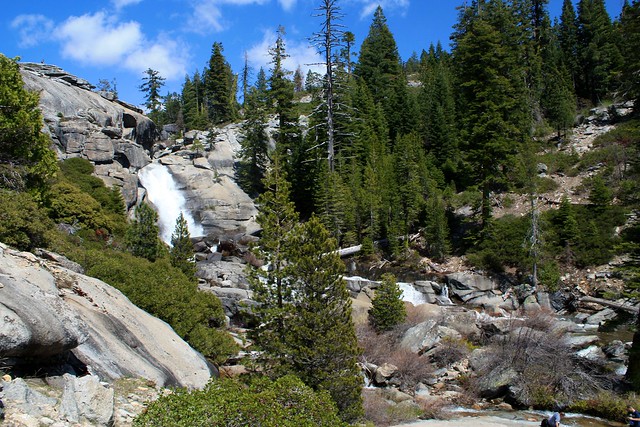 At this area, you’ll be between two waterfalls with a lot of space to stretch out and soak up the sun by the creekside. It’s a lovely place to end your hike, or you can continue up the trail to the top level of the falls, where you’ll be able to sit next to a pool by a 50 foot fall. There is a river-hop before the uppermost fall that might be too difficult to cross early on in the wet season.

No matter where you decide to stop, trace your path back to the trailhead when you’re done. It’s a long way back downhill but it’s a bit easier than going up. If you continue to the uppermost cascades, it’s about a 8.4 mile roundtrip trek from the trailhead.

Very good. The trails are well marked and well-maintained.

There are many options to camp inside Yosemite National Park, although most of them are booked well in advance.

From the Wawona Hotel and General Store in the southern part of the park, head north on CA-41 toward Yosemite Valley. Just past Wawona near the Pioneer museum, you'll cross a bridge over the South Fork of the Merced River and take the very first right onto Chilnualna Falls Road (it's about 100 feet past the bridge). Follow this road through a village of cabins and look for a dirt parking lot on the south side of the road about 1.5 miles in.

Hike it last week. Lots of water and ground cover is in bloom. Recommend trekking poles.

Thanks for this write up. I plan on heading to Yosemite this summer and I look forward to doing this hike!

Leave a Reply to Will Marquardt Cancel reply

I was thinking about doing that hike! Glad to see it was worthwhile. Of course the Valley is impressive but I also really liked the Wawona/Mariposa area. Its more "sedate" but it has its charms and double bonus for less people hiking with you.