Less than a mile from the trailhead to the very popular (and often overcrowded) Turnbull Canyon lies the inconspicuous trailhead for the Elderberry Trail. It can be very easy to miss – the sign isn’t terribly visible from the road, it’s placed at a sharp hairpin turn, and odds are you won’t find many other cars parked there. But this seemingly passed-over trail will take you into the greater Worsham Canyon loop and provide many of the same views and experiences as Turnbull – but with more rugged trails, steeper inclines, and far fewer people.

Begin at the Elderberry Trailhead – the gate blocking access to the fire road may be locked, but as long as the trails themselves are open you should be good to hike here (all trails in the Puente Hills Preserve are closed for 48 hours following rain – be sure to check their web site for updated trail closure information). A small sign notes the trail name, and a larger sign along the trail itself spells out some of the Preserve’s rules and regulations. 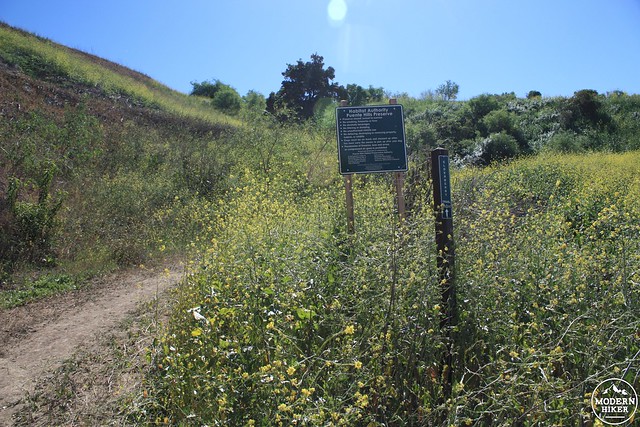 The trail begins on an old dirt road that gradually rises 243 feet over just about a half mile. The road winds its way through some extensive fields of non-native but still-pretty-in-the-spring wild mustard before leveling off a bit before a trail junction. Near the top, you’ll also start to catch some really beautiful views of Turnbull Canyon to your west and (assuming the skies are clear) your first views toward Long Beach, Palos Verdes, and Catalina.

As you’re soaking in the views, though, be sure to remain aware of what’s on or near the trail – because this trail isn’t as heavily used as Turnbull, you may see some rattlesnakes sunning themselves in the clearings on this route. I hiked this trail twice in the spring and saw big rattlers both times. If you do happen to see one, just back off and give it enough space to continue doing whatever snake thing it was doing. Remember, they don’t want to be near you any more than you want to be near them! If you are really concerned, hike with trekking poles. The vibrations on the ground will give the snakes more of a heads up on your approach. 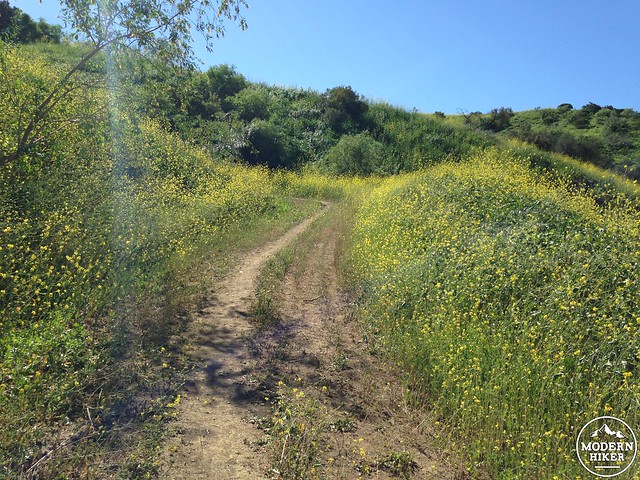 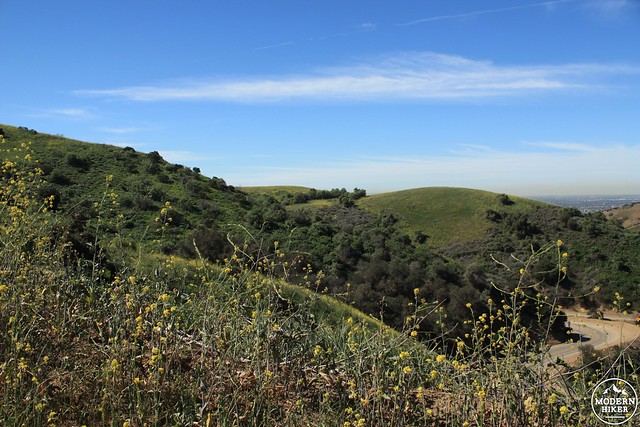 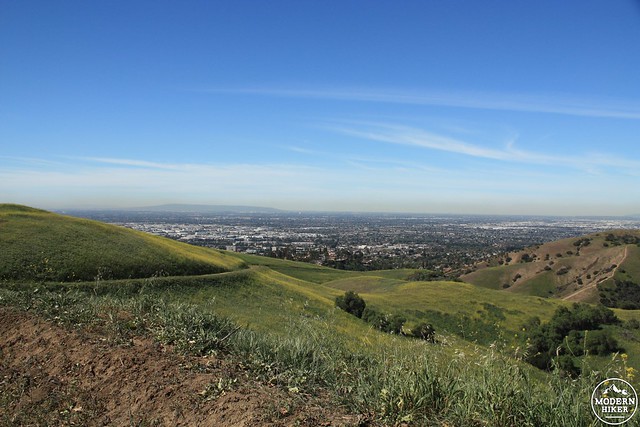 Just before the half-mile mark, the trail reaches a junction with the Workman Ridge Trail. Keep to the right at the junction to start the loop in a counter-clockwise direction.

This trail makes a slow descent toward the southwest with expansive views toward Whittier. On a clear day, if you look to the northeast you may see downtown Los Angeles rising up from behind the Puente Hills – and you might also be able to make out the Santa Monica Mountains or even the Hollywood Sign. 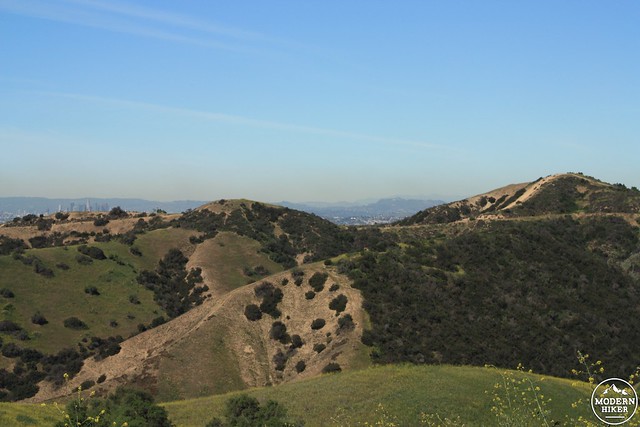 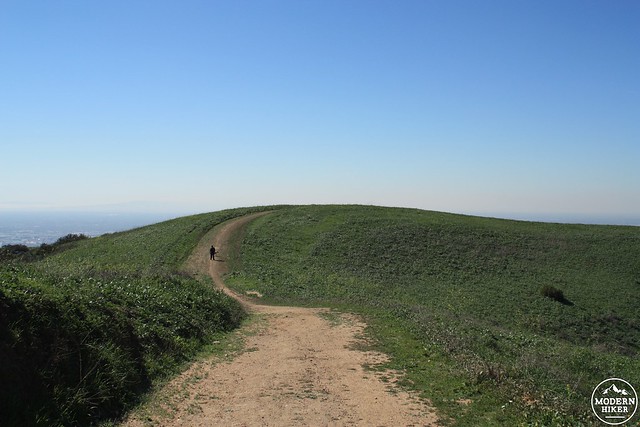 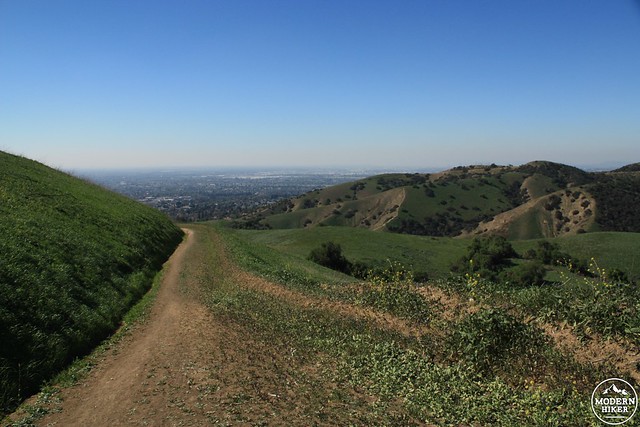 As the trail gets closer to the houses of Whittier, ignore the use-trails and spurs that leave the more established route. Several of these trail off into the backyards of private homes and a few head south along Worsham Creek to other access points that are technically illegal (even though you’d never know it until you were already trespassing).

The wider fire road narrows significantly here, and the route becomes more of a single track. 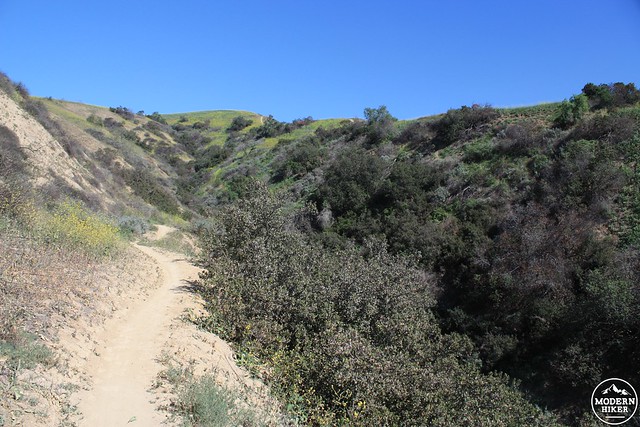 At the 1.35 mile mark, the Workman Ridge Trail becomes the Worsham Canyon Trail. For the next 1.3 miles, you’ll meander along the northern slope of Worsham Canyon, where the northern slopes across the canyon support small shrubs and chaparral, and an intermittent stream may flow at the bottom of the canyon itself. Where you’re hiking on the north side, it will mostly be grassland and sparse chaparral, but keep an eye (and nose) out for beautiful bunches of black and purple sage, as well as lupines, mustard, and other wildflowers in the spring. 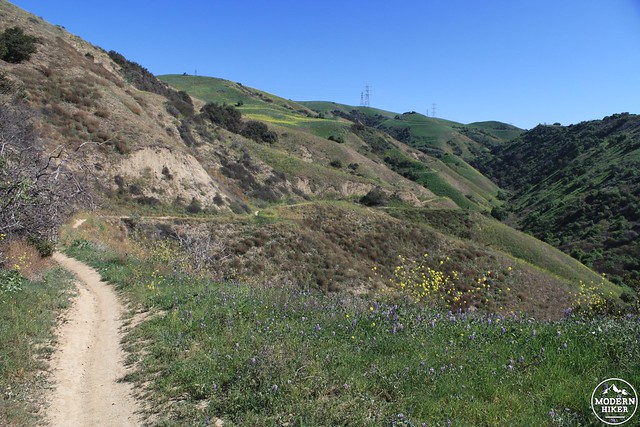 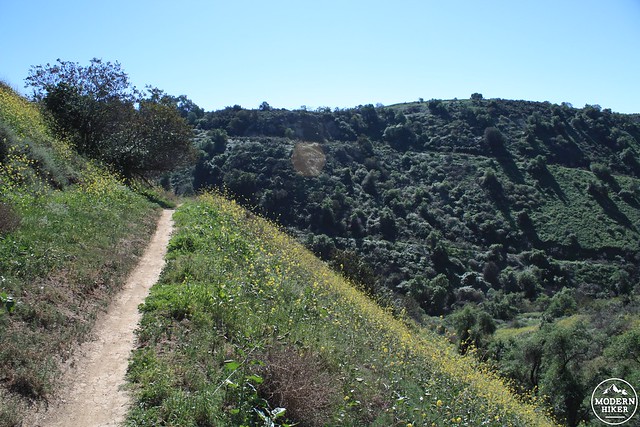 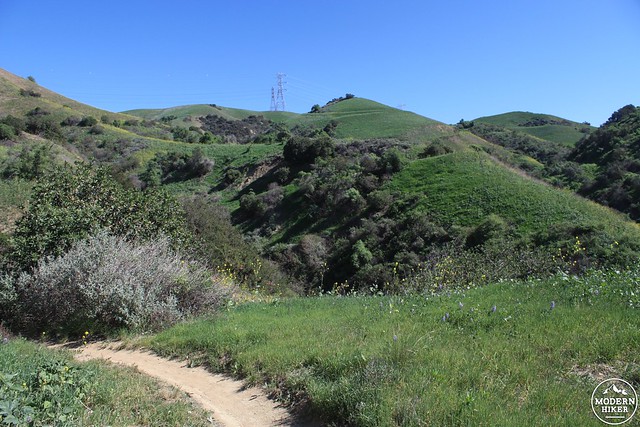 As you hike this stretch of trail, you may be struck by just how quiet and secluded it feels – even though you’re within eyesight of Whittier itself. The swarms of hikers on Turnbull Canyon don’t seem to have reached Worsham quite yet – maybe due to the tiny trailhead parking. There are, however, mountain bikers on this trail – so be sure to keep your eyes and ears open. Thankfully, even on this winding section of canyon wall-hugging trail, you’ll be able to see far ahead and should have more than enough time to let cyclists know you’re there or step aside for them on corners. When I hiked this trail, three mountain bikers were the only other people I saw on the entire trail, and all were very considerate on the trail.

At the 2.35 mile mark, the trail crosses the bed of the mostly dry Worsham Creek and begins a noticeable climb – about 480 feet in 0.9 miles. There’s no shade on this or any other part of the trail, so hopefully you’re not doing this in mid-day in the summer or it’s going to be pretty tough.

You will, however, have some very nice views down the rest of Worsham Canyon, though. 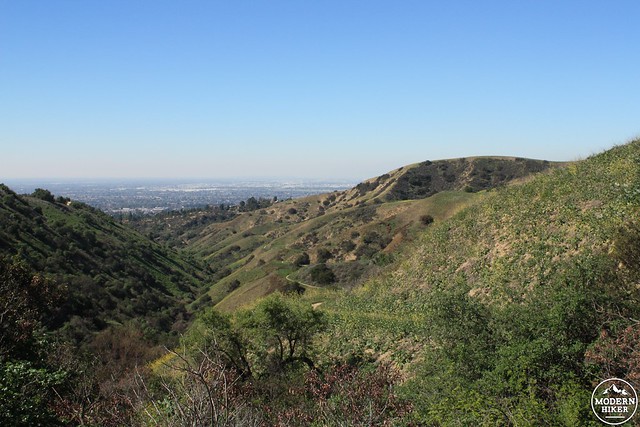 At the 2.7 mile mark, turn left onto the Skyline Trail (also labeled as the Juan Bautista de Anza National Historic Trail Recreation Route on park maps). The incline continues for another half mile before you reach the Workman Ridge Trail – also the high point of elevation for this route.

You’ll be hiking under some high tension power lines here, but if you can look past the metal structures you might be treated to some truly beautiful views of the surrounding mountains and cities. Like many trails in the Puente Hills, the views north toward the San Gabriels can be especially inspiring on clear days. 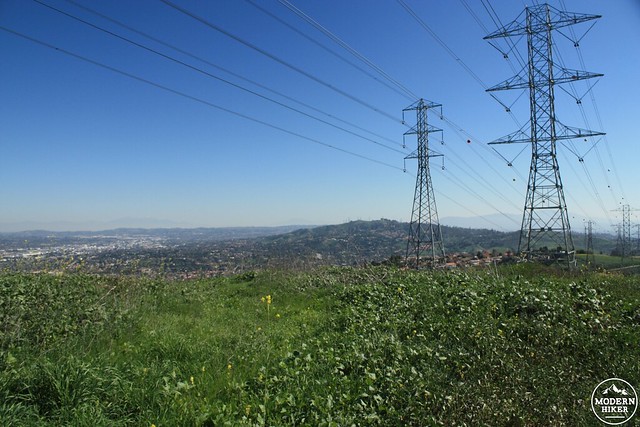 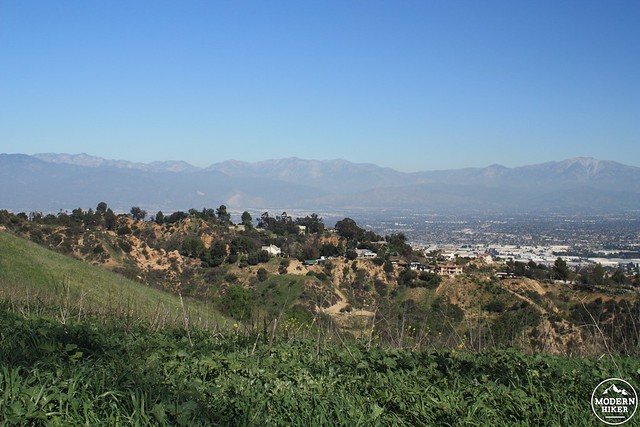 Turn left from here and it’s just under a mile of smooth, downhill hiking – 0.6 miles on the Workman Ridge Trail and another 0.4 back down the Elderberry Trail.

Good. Most trails are clearly marked and well-signed. There are several use-trails and mountain bike routes that can confuse hikers, as well as some trails that lead to access points that are not necessarily considered legal.

From the 605 in Whittier, take the Beverly Boulevard exit and head east. Stay on Beverly and in 2.6 miles, it turns into Turnbull Canyon Road. The trailhead is at a sharp curve approximately 1.2 miles past Beverly Hills Drive. The parking area at the trailhead is very, very small - so make sure you leave enough room for others when you park.

I went back to the Worsham Canyon trail via the Whittier Collage route just to give it a second look. Walking through Whittier College property doesn't seem to be an issue. They had both baseball and softball games going on thus there were a lot of visitors in the upper reaches of the College where the east entrance to the trailhead starts. I verified the green Puente Hills sigh, just like the one in your first picture. Hiked the trail and went up to the house at the end of Philadelphia street. Although there were no trespassing on the other side of the trail I believe, especially on a weekday, I could probably skirt past this property without too much problem. Verified via Google maps that indeed the trail from Philly street on (the no trespassing part) will connect to the Elderberry Trailhead. You can also go up a steep 1/4 mile incline, and it is very steep, and reach a private road that goes to a back entrance of the landfill. From that road there are some great views. Took some pics but no time to upload them. One day when I feel lucky I'll cross to the other side of Philly street and see when that no trespassing zone opens in to the Puente Hills Authority property.

I was confused about that entry when I was first scouting the area - it seems like a no-brainer trailhead: lots of parking, easy access, and it connects with the trail network almost instantaneously. However, when I called the Puente Hills Authority they stressed that this was not an official, recognized trailhead (despite what Google Maps says).

I agree with you that it's kind of a bummer, especially considering the trailhead parking at the Elderberry Trailhead can be generously described as "minuscule" and having trail access from the college would be a great benefit for the college and the neighborhood. I would hope that homeowner could work with the Authority to establish an easement for hikers to continue along the trail without fear of breaking the law but I can't say I'm extremely familiar with the history in the area. Based on some comments from residents along Beverly Boulevard/Turnbull Canyon Road, it seems like the relationship between homeowners in Whittier and hikers is pretty confrontational right now, which is a shame.

I live about a mile from Whittier College off Mar Vista. At first I noticed this trail on Google earth and thought it a perfect spot to walk my Labradors since I could walk, not drive, to the trailhead. I accessed the trail from Whittier College over by where the aquatic center and tennis courts are. Once you start the walk up, what I believe is called Canyon Road, you are greeted with several no trespassing signs (at the base of what appears to be a public road). As you pass between the football field and softball fields again there are big warning signs from Whittier Collage that you are trespassing and will be cited (this is in a spot that looks like it's WC's "facilities yard"). Finally I saw the Puente Hills green sign and was able to reach the trailhead. Made it about 1/4 mile down this trail and you reach a house at the end of Philadelphia. You have to pass through this property to get back on the trail. But big huge no trespassing signs, video monitoring equipment, etc. greeted me and my dogs, and although I could see another Puente Hills green side on the other side of the house where the trail continues I am forced to trespass on this property. I decided to head back as I can't afford to get hit with Misdemeanor trespassing and who knows what kind of armory the folks in that house have. Very unfriendly way to try to reach this beautiful spot just one mile away from my house. What's up with all the no trespassing signs, warnings, and locked gates? I refuse to drive to a different trailhead to access this trail because it is walking distance and the trail isn't worth driving to. But it would be great if I could walk there without fear of law breaking, etc. I also saw about a 2 1/2 foot rattler on my way back down Canyon Road, but not surprised.

Gorgonio - I made note of that on the Turnbull Canyon write-up as well. Here it's slightly less of an issue but still a little strange that the Elderberry Trailhead can probably only fit four or five cars at its designated parking space. As I noted in the comments on that write up, I think a residential permit that allows people to park there during the day for a few hours would be a totally reasonable compromise, but a resident in the thread felt strongly about making it even more difficult for us outdoorsy riff-raff to enjoy some rare SoCal green space.

***NOTE***
The City of Whittier is making it difficult for people to park anywhere near the base of these hills anymore and enjoy the trails. They have instituted parking permits for residents only around Turnbull Canyon Rd. Please take note otherwise your vehicle could get ticketed, andor towed. hopefully someone can startup a campaign or something to notify the city to make it easier for people to enjoy the hills, and not in the city's usual way of screwing everything up.