A short 4 mile loop through the San Gabriel High Country to Winston Ridge and Winston Peak along sections of the Pacific Crest Trail. This route turns a very easily-bagged single peak hike into a moderately strenuous two-peak journey, with expansive views of the interior San Gabriels and Antelope Valley.

On an early Thursday morning, I joined up with a group of the Sierra Club’s Hundred Peaks Section and drove deep into the Angeles National Forest. As a member of the HPS, one of the goals is to summit 100 Californian peaks over 5000 feet. They range in difficulty from short drive-ups to full-scale backpacking routes. The group on this trip was attempting to combine four short treks into a combined trip that would make the drive worthwhile.

We started at Cloudburst Summit, just a few miles from the end of the (currently drivable section of the) Angeles Crest Highway, parked at a small dirt lot, got out and stretched our legs. 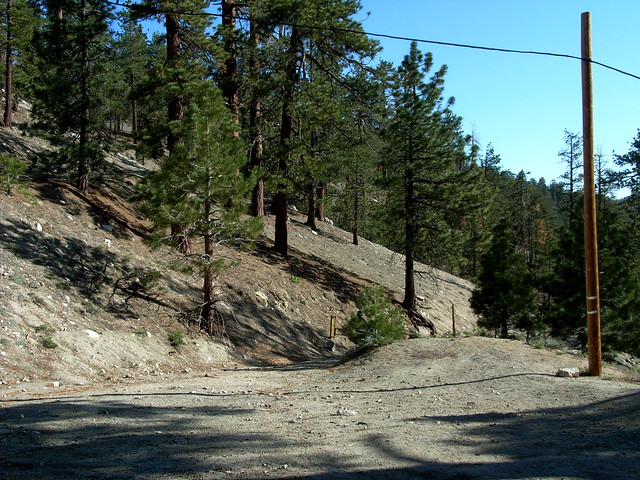 If you were only interested in hitting the top of Winston Peak — and also didn’t care that you probably drove for 90 minutes to do a 15 minute hike, face the fire road and look to your slight left — you’ll see a faint use trail that makes a quick ascent of the ridge, right toward the Peak’s summit. If you want to actually have a decent hike, go straight on the fire road and take its slow descent as it travels toward Cooper Canyon. Alternately, if you loathe fire roads, you can take the Pacific Coast Trail for one mile, as it parallels the road in a small gulch. 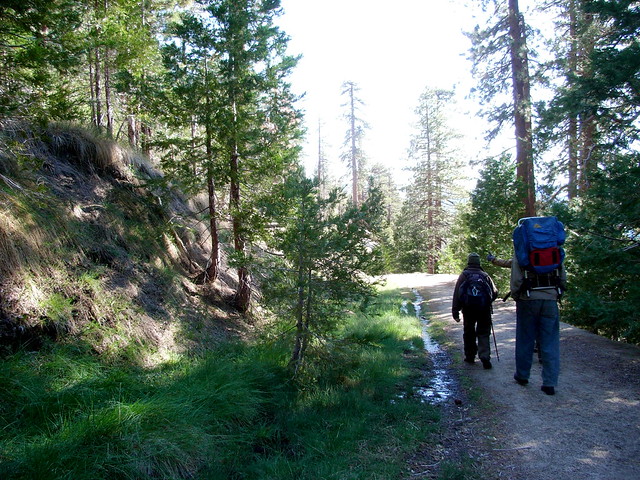 If this is the farthest you’ve gone into the Angeles National Forest on the Crest Highway, you’ll notice the landscape is quite different than the drier scrubland near La Canada Flintridge — that’s because you’re already more than 7000 feet up — far higher than most of the prominent peaks of the western San Gabriels. The landscape here is more forested (with actual trees!), wetter, and cooler — most of us were hiking in long sleeves and pants, even at the end of May.

Winter does tend to linger late into the season here – and the region has a history of dangerous snow conditions. In fact, the ridge is named for Pasadena businessman L.C. “Lid” Winston, who set out into the San Gabriels on a hunting trip in 1893. He never returned. When the snow began to melt, his body was found on this ridge. Eventually the ridge and the peak were named in his memory.

After about a mile on the road, you’ll reach a crossing with the Pacific Crest Trail. Turn left here and continue over a small series of bumps, making sure to take in the great views of the surrounding forest while you’re walking. 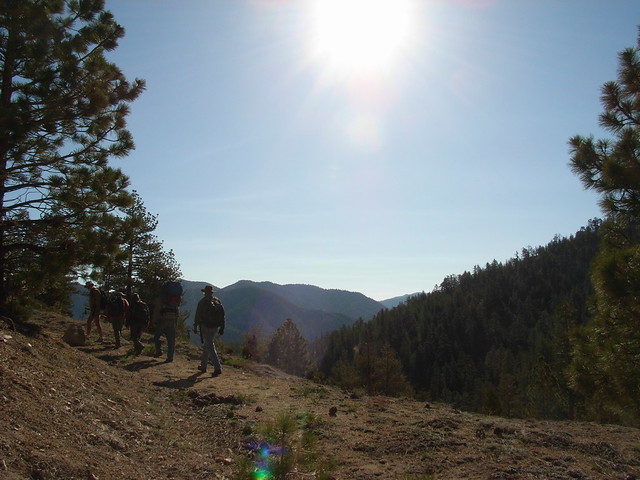 After about 1.6 miles, you’ll reach an unmarked saddle. The Pacific Crest Trail continues northeast to Cooper Canyon Campground, but you’re leaving it here. To the southwest of the Saddle is the large rounded hump of Winston Peak, which you’ll be returning to in just a little while. Opposite the peak is a smaller hill, lovingly called “Bump 6903.”

The hike leaders said there were two options to deal with 6903 — over it or around it. There is no established trail going over the mountain, but there are two unmarked use trails that travel around the base. If you’re facing the bump, stick to the left — it’s more traveled and better maintained — but I still found it surprisingly rugged and with some nice drop-offs to the side. 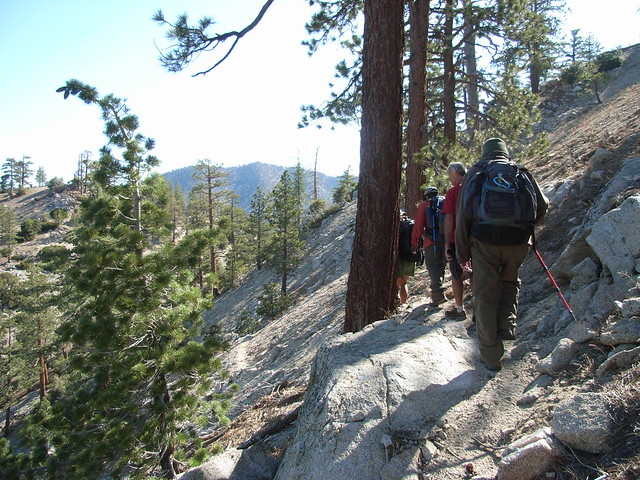 The use trail wraps around the western side of the Bump and ends at another barren saddle. Here, our intrepid leaders consulted maps and gave us all a good sense of the geography of the area, then pointed us toward the footpath to the high point of Winston Ridge. 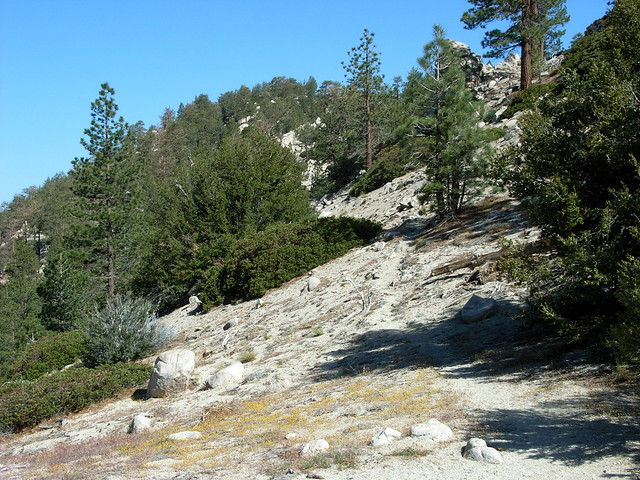 From here, it’s about a quarter mile and a steady 165 foot ascent to the broad, sparsely forested plateau at the Ridge’s high point. There aren’t really any distinguishing markers to note when you’ve reached this milestone, but be on the lookout for a some groups of high boulders — and you’ll find the Sierra Club peak register tucked away. While you’re there, relax, and enjoy the great vistas of Pleasant View Ridge to the east — 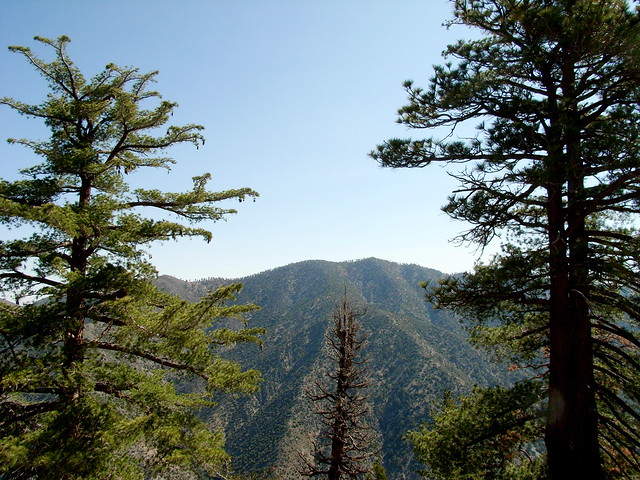 … and the next stop on your trip — Winston Peak to the south. 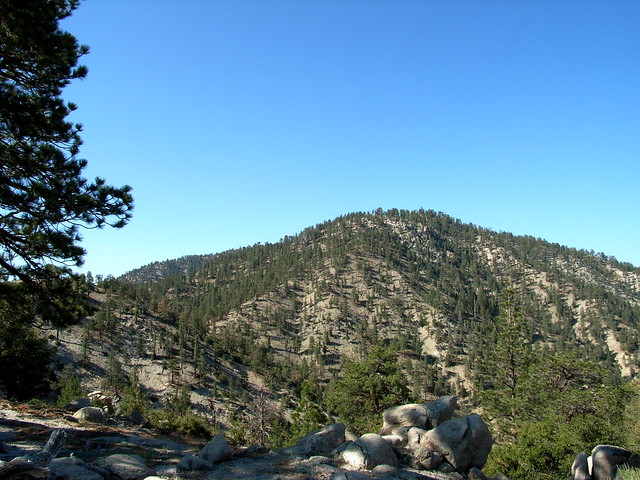 Backtrack to the first saddle, when you first left the Pacific Crest Trail, and look up toward Winston Peak. There is a very very faint use trail that starts the climb up this mountain. If you can’t find it, just start walking up the hill, as that’s pretty much the path the ‘established’ trail takes. 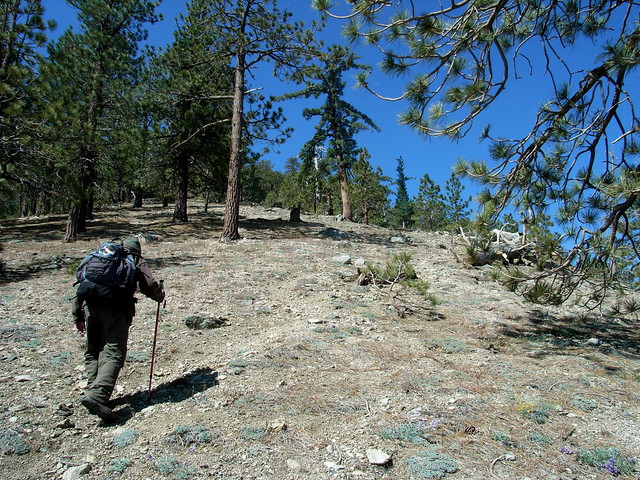 Up until now, you’ve had it pretty easy. Now is when it gets tough.

Although, by far, this loop trail is not especially difficult, while climbing Winston Peak from this direction, you will ascend 720 feet in .6 miles. In addition to the 20% grade, you’re also about at the elevation where people who aren’t used to thin air are going to be huffing and puffing — so even if you’re in good shape, this part may take you a bit longer than you’re used to.

But hey, no one gets into hiking because it’s easy, right? 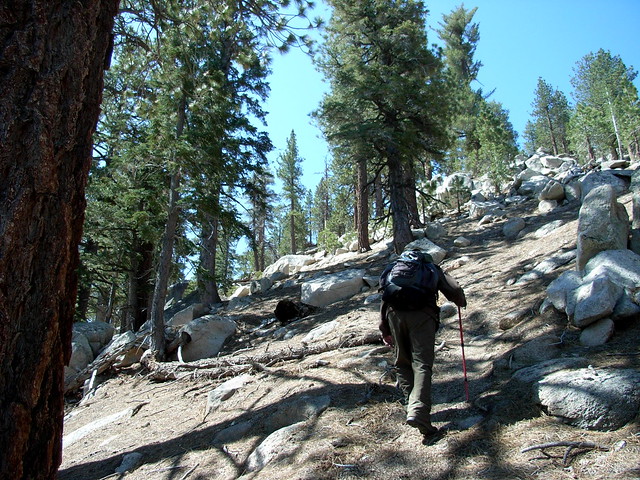 At the top of Winston Peak, there are some towering rock formations. Look for the summit register, take a break, and then look for a more well-worn trail to the southwest of the peak. It’s just a short half-mile back to the trailhead.

When you’re done, consider combining this trip with a nearby trail like Mount Akawie, Kratka Ridge, or Waterman Mountain.

Faint. The fire road and PCT are well marked and maintained, but the other routes are not, and also aren't marked on most topo maps. If you're going in alone on this one, be sure to study these maps carefully.

Nearby Buckhorn Campground is the closest available developed camp site. It is first-come, first-served and closed during the winter months. Hike-in Cooper Canyon Trail Camp is also nearby, just a bit farther east on the PCT.

From the 210, take the La Canada Flintridge exit on the Angeles Crest Highway. Continue 32.7 miles to Cloudburst Summit and park.