I recently conducted an extremely non-scientific poll in a Facebook hiking group about why there aren’t more people out hiking in the desert. Right here in Southern California we have two of the most spectacular desert regions – Anza-Borrego Desert State Park and Joshua Tree National Park – in the country. The rich variety of experiences offers as much or more as the mountains, foothills, and coastal regions, while the sense of solitude and adventure are unparalleled in Southern California hiking. So what gives? 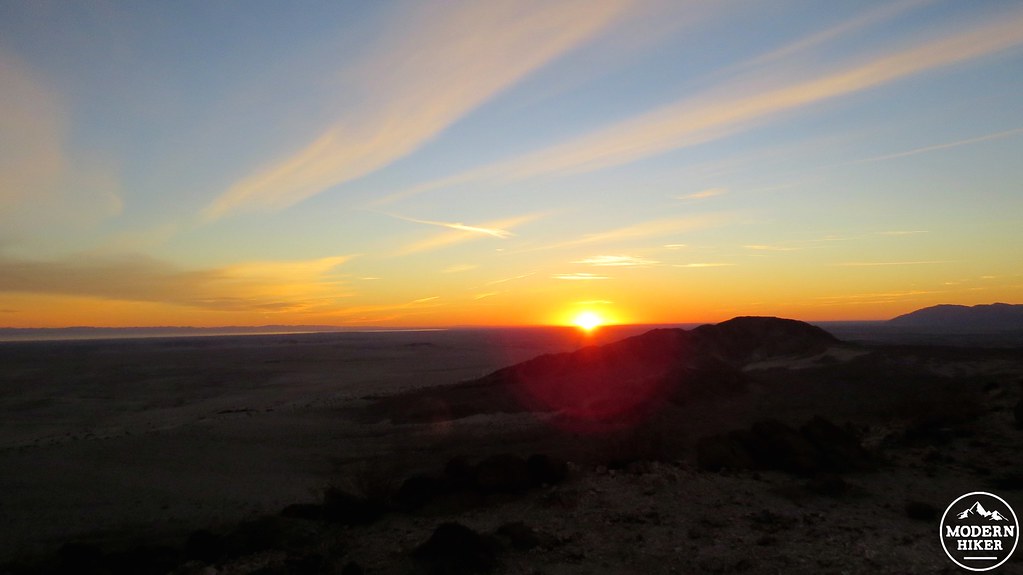 There were a number of common reasons, including time spent driving and lack of affinity for dry environments. There are a lot of folks who take the “stabby plants and kitty litter” line when it comes to desert habitats, and there may even be something wired into the brain that creates a preference for certain environments over others. However, the big factors for not visiting the desert were not lack of interest or desire not to drive. It was the fear of getting lost and the fear that one’s car could not navigate sandy backcountry roads. 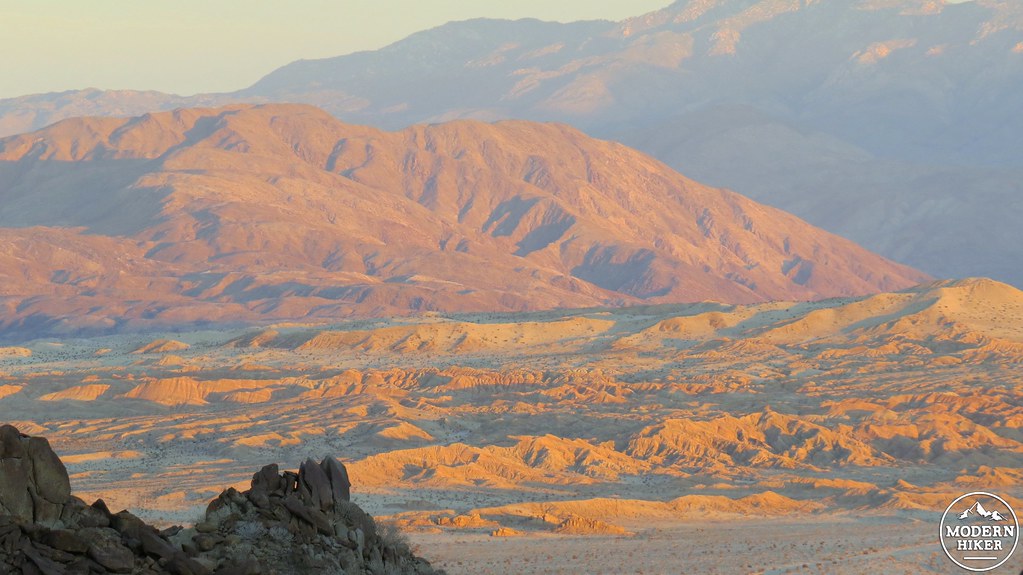 It’s entirely possible to get lost in the desert or get your Honda Civic stuck in the sand. No doubt. However, there are a number of great trails in Anza-Borrego that provide little to no such risk. For desert novices looking to get a taste of what the desert has to offer, which does include a touch of getting slightly lost and a touch of rugged roadways, the trip up to West Butte of Borrego Mountain and its attendant maze of badland washes is a perfect place to start. 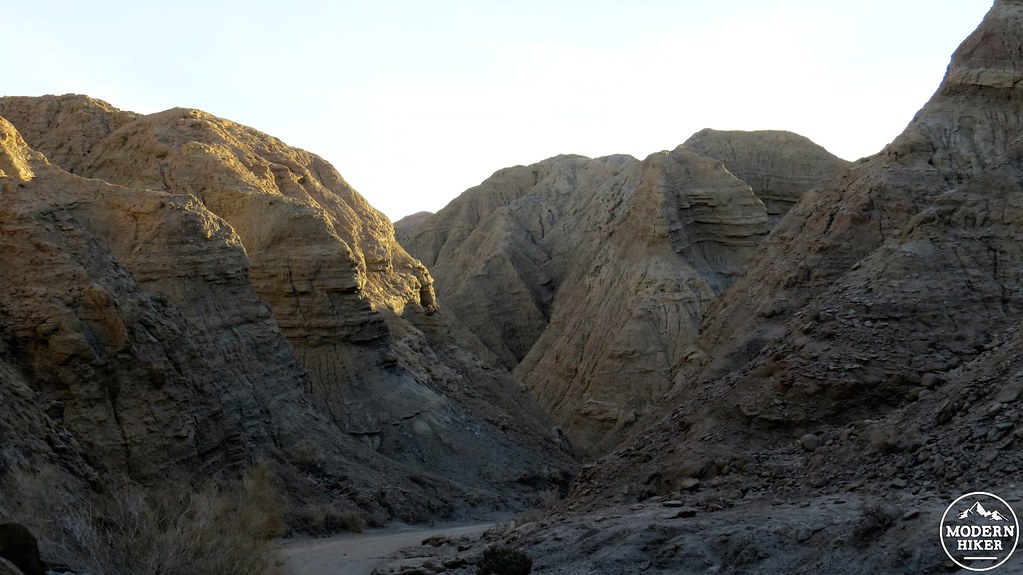 Geologically speaking, West Butte is part of a small granitic mountain complex rising up through layers of ancient sedimentary rock. The sedimentary rock, which composes the geologic region known as the Borrego Badlands, has attained fantastic, intricately carved forms in a maze of sparsely  vegetated canyons. Other popular hikes nearby include Fonts Point and Seventeen Palms, which all visit the densely layered remains of ancient sea beds that came and went over millions of years. 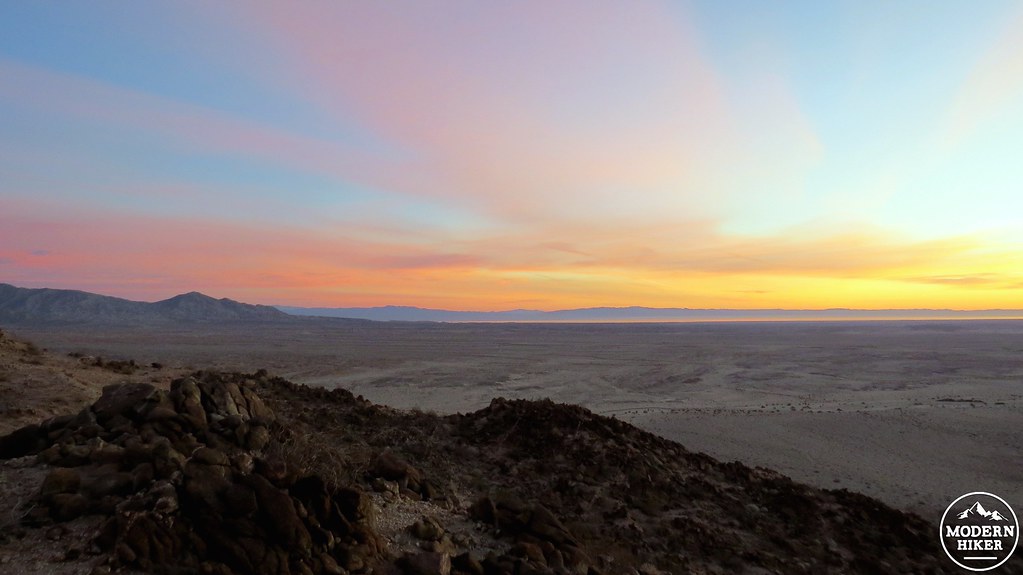 Dawn over the Salton Sea

Start from the sandy parking area just before The Drop – a “don’t try this at home” descent down a steep slope that is suitable only for experienced drivers in 4WD vehicles. Climb and follow the ridge in front of you as it snakes its way toward the granitic mass of West Butte. You’ll peer down into a bewildering maze of badlands on either side as the ridge slowly gains altitude on its approach to the butte. As you reach the base of the butte at .6 mile, the rock you’re standing on makes a dramatic change from beige sedimentary to heavily-oxidized igneous rock. 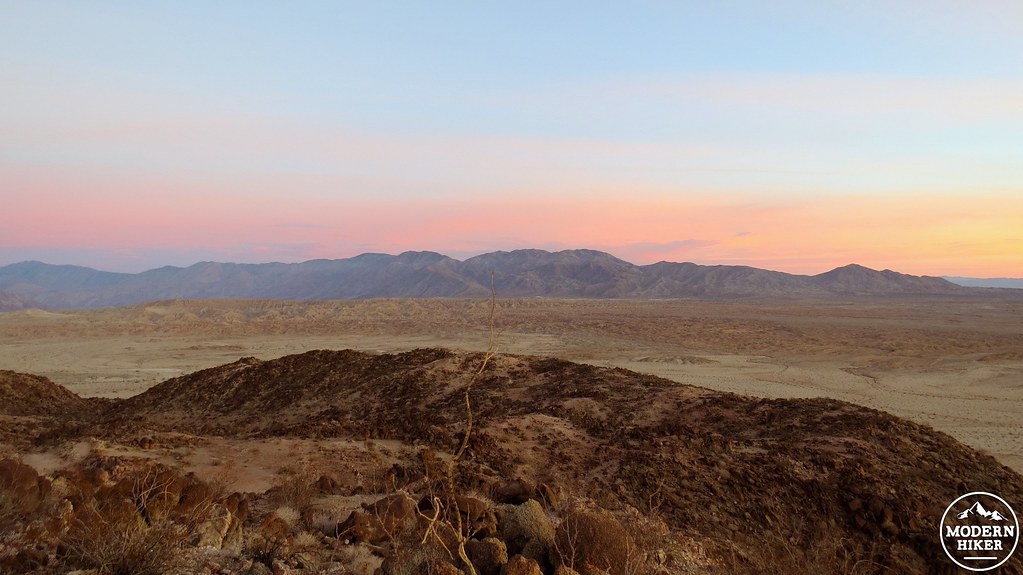 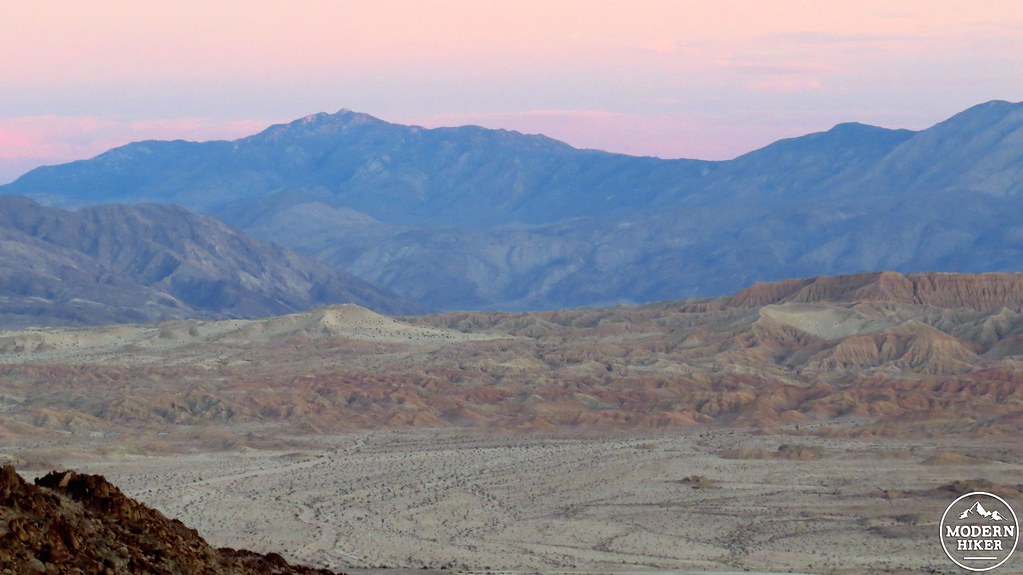 Follow the trail north as it winds up to the flat heights of the butte. The best way to experience this hike is to time your arrival on the butte for sunrise. You can watch the sun rise over the Salton Sea while its first rays cast alpenglow across the Santa Rosa Mountains to the north, the San Ysidros to the west, and the Vallecito and Pinyon Mountains to the south. The low angle and reddish tint of the rising sun brings out the subtleties in the badlands just to the north between the butte and Fonts Point. The harsh, flat light in the middle of the day does very little justice to the landscape. 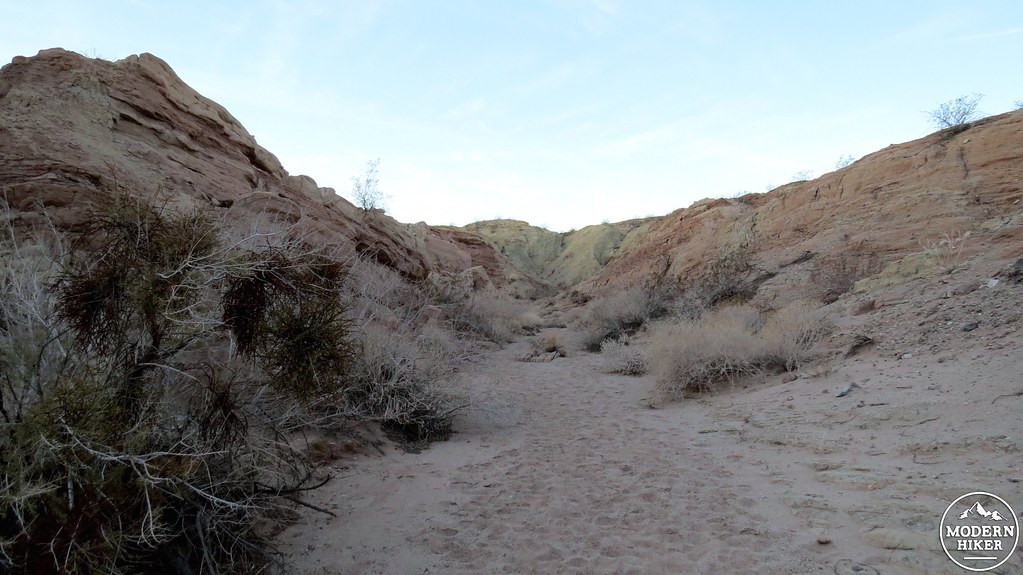 Once you’ve enjoyed the view from the butte, backtrack the way you came up until you reach a trail heading west at 1.4 miles. Turn right and begin a very gradual descent along another ridge. At 2.1 miles, the ridge will terminate above a narrow canyon, and you will have to make a quick, but easy scramble down to the sandy canyon bottom. For the folks worried about losing their bearings in the canyon, remember that finding your way again is often a simple matter of scrambling back up a ridge to take in the lay of the land. From this canyon, resume your travel northwest as the canyon snakes its way toward its outlet. 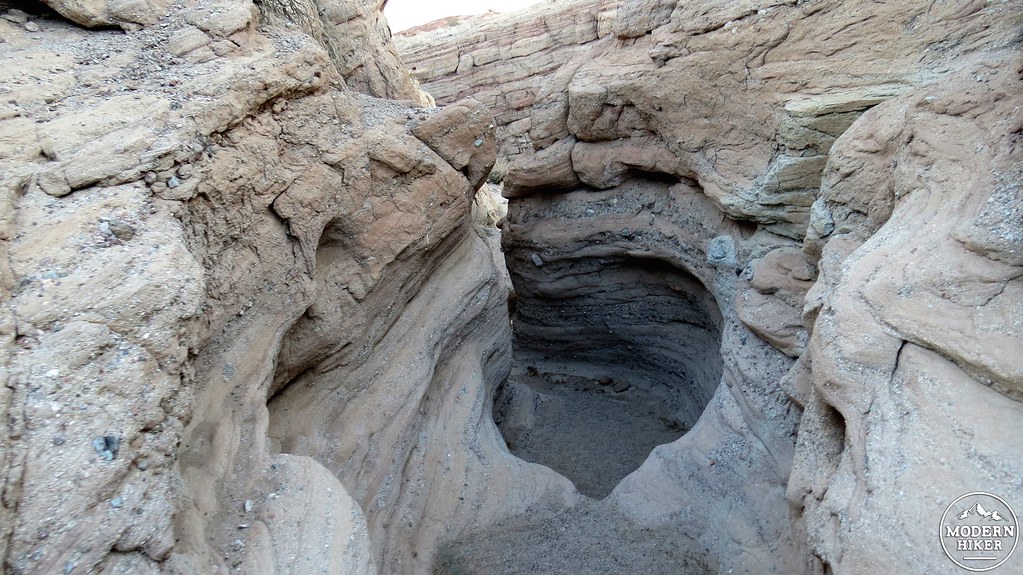 At 2.6 miles, the canyon you’re traveling in will merge into a larger canyon (Borrego Mountain Wash) that also doubles as a 4WD road heading south. Turn left and follow the tire tracks through this larger canyon. As you make your way up the canyon, numerous side canyons open up for exploration. On a cool winter day, you could spend an entire morning and afternoon exploring just a small portion of the badlands before exhausting even a fraction of the terrain. For the purposes of this loop, continue heading in a southerly direction as the canyon imperceptibly grows taller and wider before reaching a large, open area at 3.6 miles. 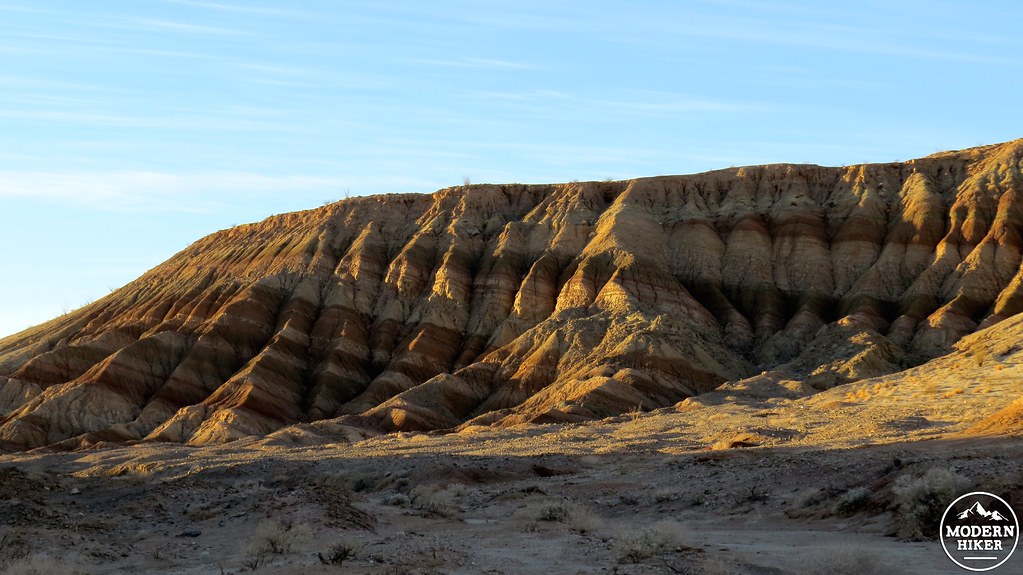 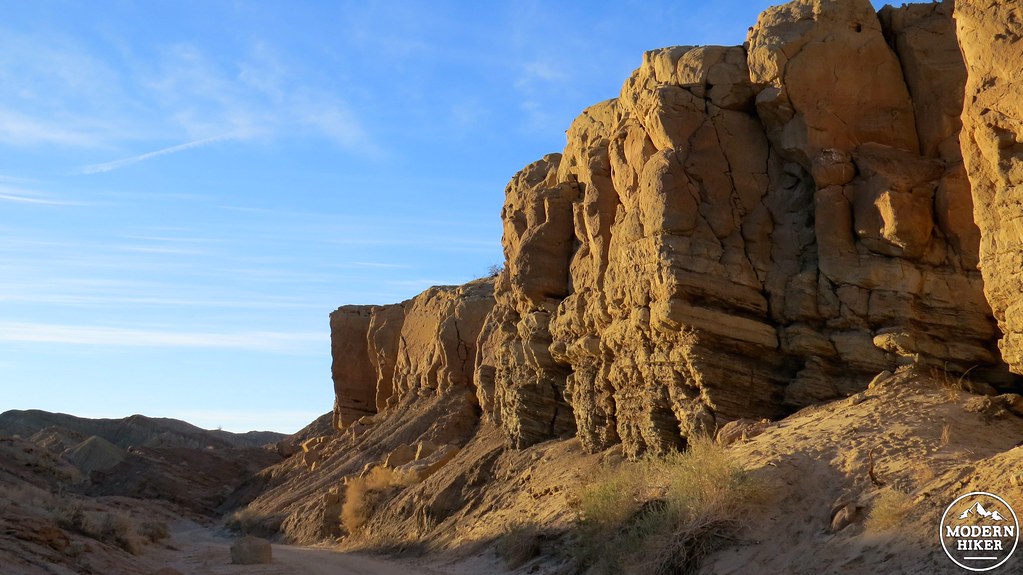 This large, open space is the “landing zone” for cars coming down The Drop mentioned earlier. Looking right (southwest), you’ll notice a section of the canyon wall with beautiful alternating layers of sandstones in different tones. Seen in the early morning, this canyon wall practically glows. As you pass the open area, the canyon walls will begin closing in on you. This may spook some hikers with a sense of claustrophobia, and if that applies to you, you will not enjoy the next quarter of a mile. 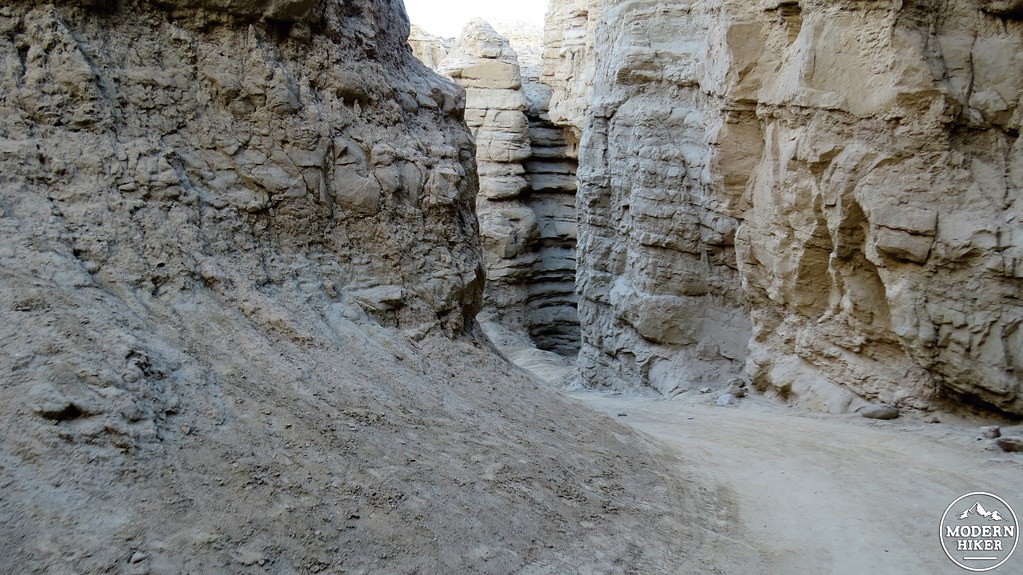 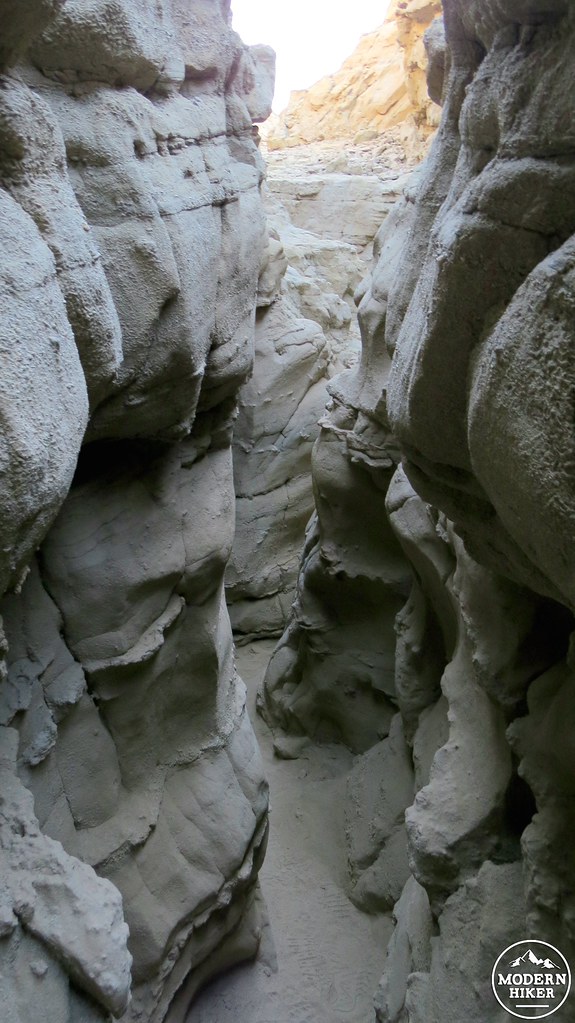 The walls come closer and closer together until finally, at 4.2 miles, you reach the Slot, which is one of the most impressive slot canyons in Anza-Borrego Desert State Park. As you enter the tightly-packed confines of the Slot, you may find yourself squeezing sideways and possibly even needing to remove your pack to make it through the ever tightening gap! 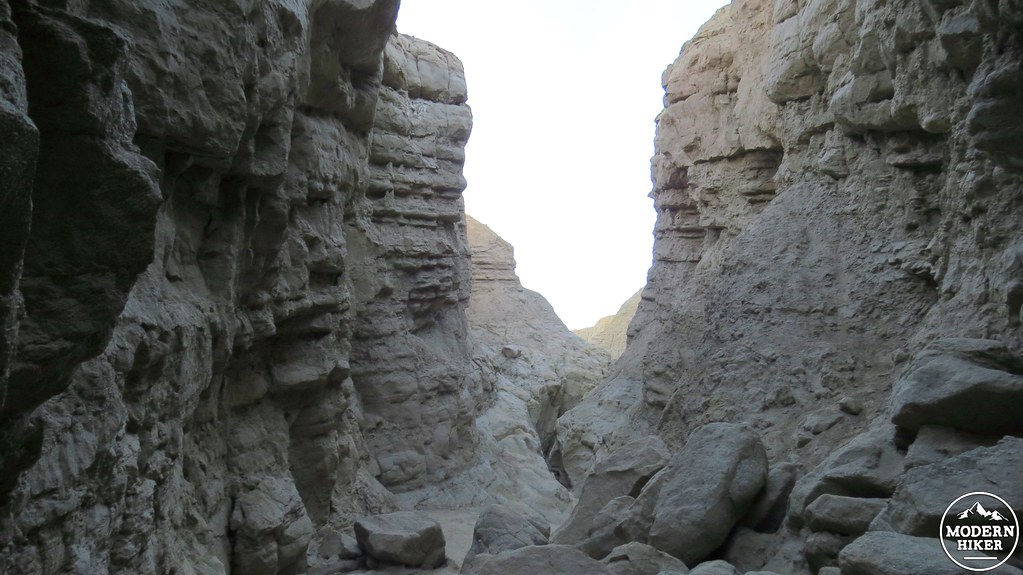 Finally, when it appears that the slot can squeeze no further, the canyon opens up a bit, then tightens up, and then opens one last time before a side trail on your right climbs up and out to a point near where you park. There are a number of social trails leading out of the Slot, and you will want to pick the first one you come to. The others will get you out of the canyon, but you may possibly end up on the wrong ridge, which could lead to some unnecessary backtracking. 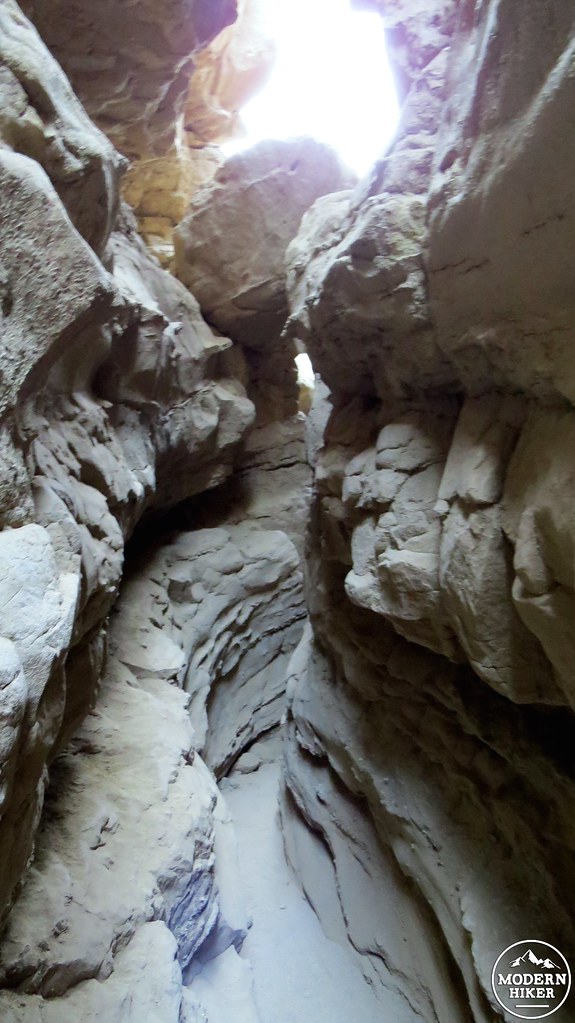 If you’re still nervous about directions and don’t fancy the possibility of wandering around the badlands all day, we encourage you to follow the attached GPS file in order to assist with keeping to the path. Otherwise, enjoy your time down in this other-worldly landscape.

There isn't really a trail to speak of, although hikers have carved out a rudimentary path that is easy to follow except for a small handful of scrambling spots on the Butte and when you drop down from the second ridge into the canyon.

Anza-Borrego Desert State Park's liberal camping policy means that you can camp at a number of places nearby. However, nearby Hawk Canyon may be one of the most beautiful camping areas in the Borrego Badlands area. Not that this is a primitive campsite, which means you will have to bring a metal container for your fire and pack out all of your trash.

Hi Eugene. First off, don’t hike this during the summer. It’s way too hot.

Second, what do you mean by a native Butte?

hello, I am interested in visiting some native buttes, any ideas? thanks, eugene

Thanks for the excellent write-up. I downloaded the GPX file from AllTrails to my GPS software and then forgot to load it into the GPS. It is the same route you show here. I did this as an overnight hike which allowed for a late Saturday start and early Sunday finish, ultra leisurely. Lots of time for evening and morning photos and enjoying the amazing Anza-Borrego Desert sky.

Some photos of my trip here: https://flic.kr/s/aHskUoSEEd

weird - the file works fine on this end!

the GPS file doesn't open. but thank you for all the other info went out and did half of it before it got dark on us the other day.

Hi Leslie - Sorry I didn't respond to this sooner - I don't always get notifications for comments. Thank you so much for the kind words - yes the Slot and the area around it is a favorite of mine, and I agree that it's excellent for kids.

Great write-up, Scott! We've been to The Slot as a family many times, but never camped near there or did it as a backpacking trip. We just parked on the top of the mesa to the southeast, took one of the use trails down into the canyon, and explored. It's a great place for kids!

(I'm excited to see that you're helping to update A&A - that will be great to have!)