Towsley Canyon is a fascinating little gem of a trail nestled in the Santa Susana Mountains. It’s just off the Golden State Freeway and minutes away from the amusement parks and In-N-Outs of Santa Clarita, but in a quick 5.3 mile loop you’ll work up a sweat, hop near frothy streams, dodge natural tar pits, and walk through a narrow slot-like canyon area of upturned sedimentary rock called The Narrows.

The hike starts out innocuously enough at a large parking area just off the 5. You’ll be on a paved road for the first part of the trail, as it passes a few old buildings and works its way through two parking lots. For the purposes of distances, this trail starts at the parking area closest to the street. 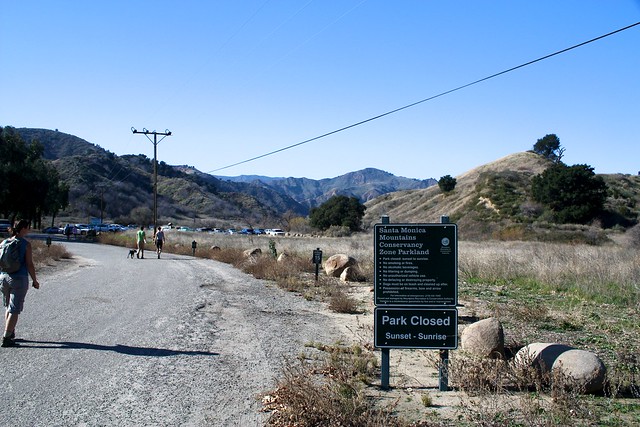 At 0.2 miles, you’ll pass two small signs on the south side of the road for the Towsley View Loop and Canyon View Loop Trails. Hikers have differing opinions as to which direction you should do this loop in. Both directions have a good incline workout, but the clockwise route is a bit more steep, while the counterclockwise route is slightly more gradual in its incline. For this route, I chose counterclockwise – so ignore these trails for now and stay on the road. 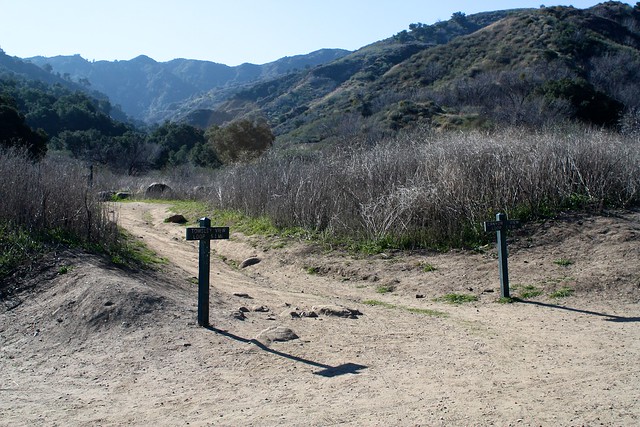 The road passes through another parking area that, for some reason, you have to pay to use ($7 at the time of writing). Drop off some cash in the metal box if you parked here or if you’re feeling generous, then continue on the road. 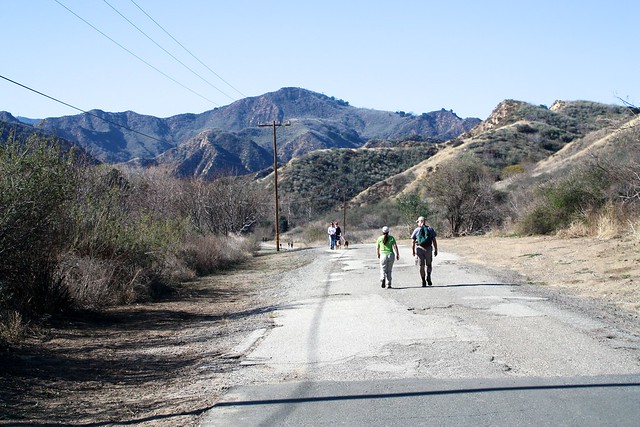 The road stays fairly flat and takes you west, further away from the freeway. At 0.6 miles, there is a short spur trail that leads to the Towsley Lodge (available for private events). Look for the sign for the Towsley View Loop Trail on the (sometimes) chained dirt road and hike in that direction. 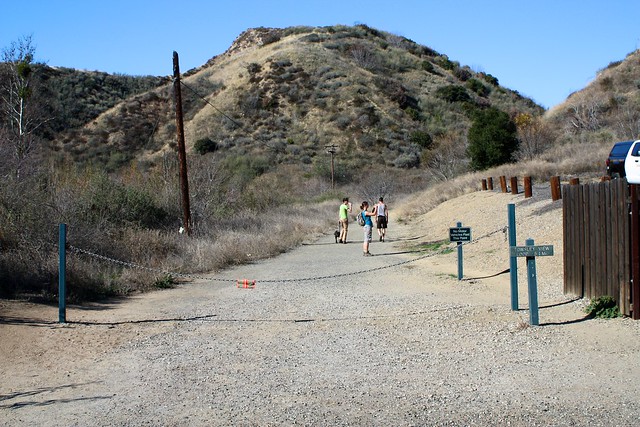 Although this trail starts off on more fire road, it soon transitions to a wide dirt trail – and as soon as you get away from the visitor’s center, the landscape quickly surrounds you. 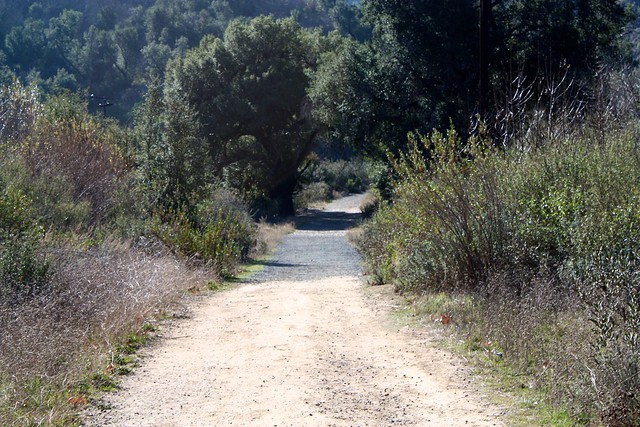 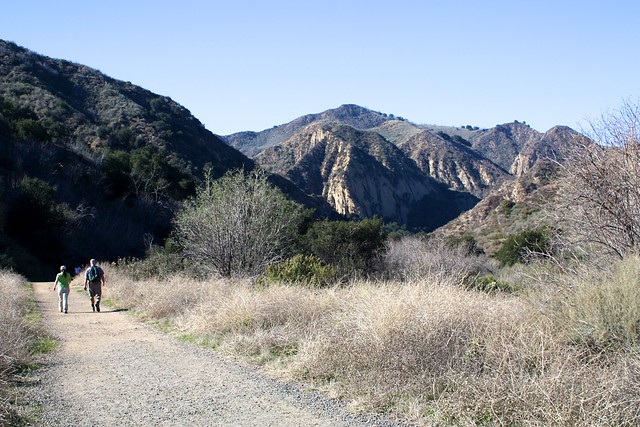 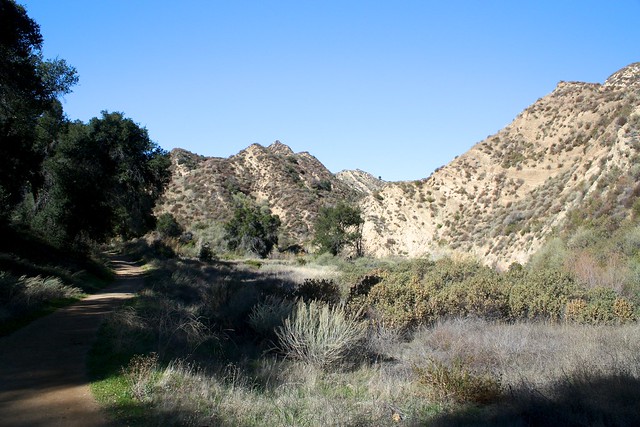 At about the 1.6 mile mark, the trail makes a sharp turn to the south and heads directly between two large slabs of upturned rock. This is the area known as The Narrows, and it’s definitely one of the major attractions of this trail. 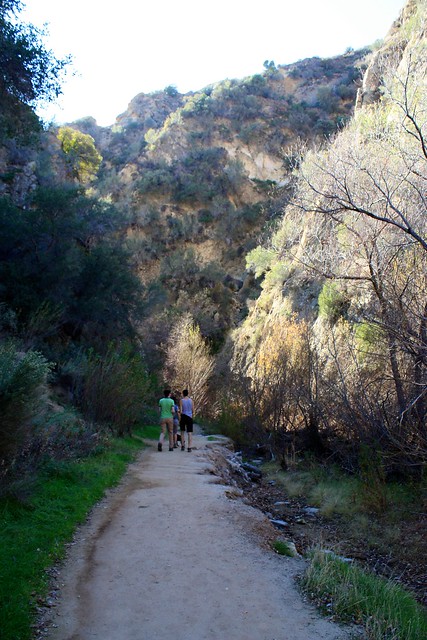 You’re going to want to take a little time to explore this area when you get to it. There are small caves in the cliffs above you, strange rock formations literally surrounding you, and a bubbling creek running between the rock formation, made occasionally frothy (and pungent) with tar. Some of the walls make for good, quick scrambles if you know what you’re doing too – and in wetter seasons the canyon floor will be green with small trees. 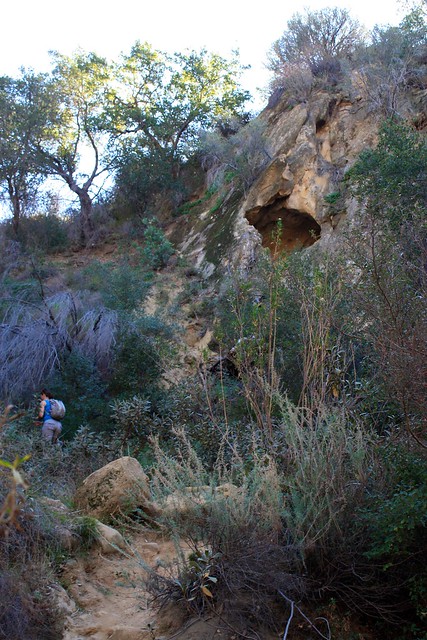 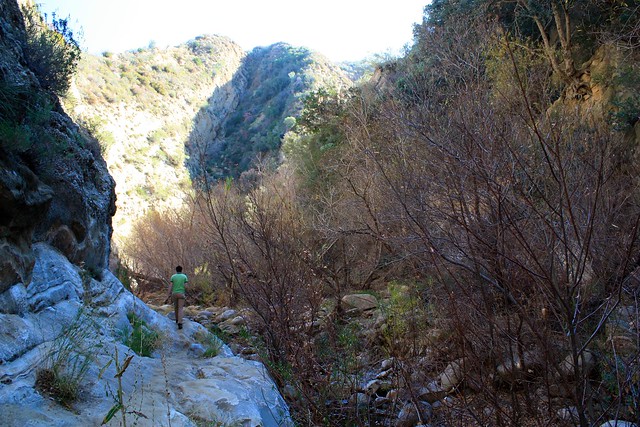 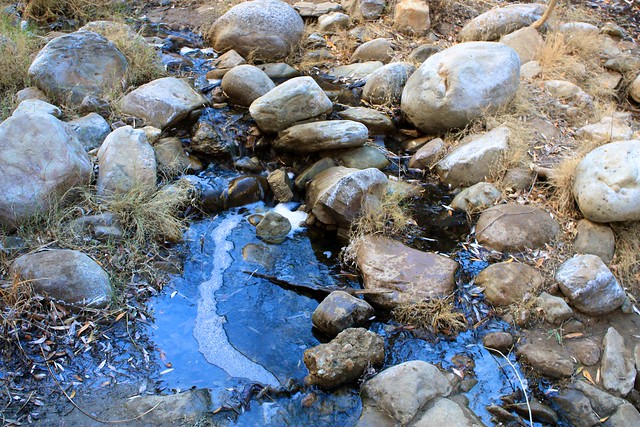 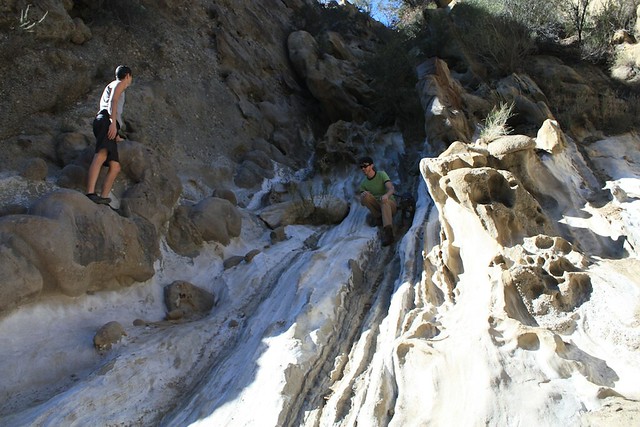 By the 1.7 mile mark you’ll exit the south side of the Narrows, where the trail opens up to some gorgeous SoCal scrub scenery. Ignore the remnants of the old oil-drilling road that leaves the trail on the right hand side and continue south. At 1.75 miles, the mostly level-trail starts to make a big climb. Prepare your legs – and also make sure to keep an eye open for the tar pits, scattered oil equipment remains, and interesting tree root formations to your left. 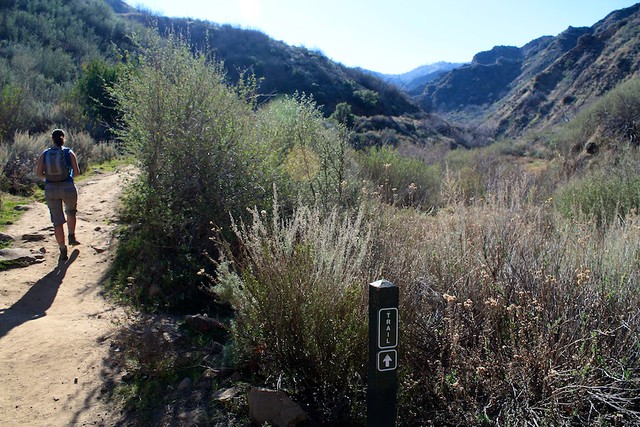 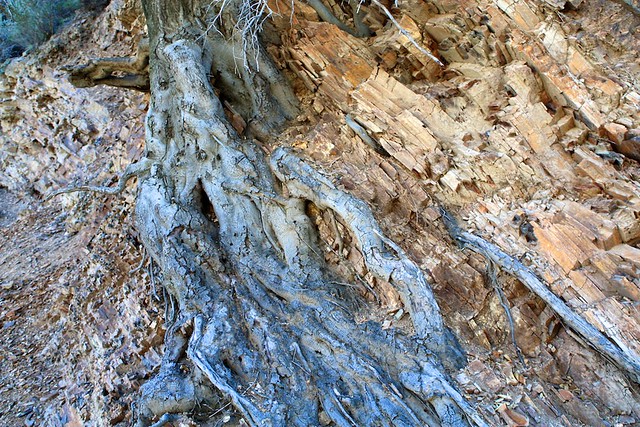 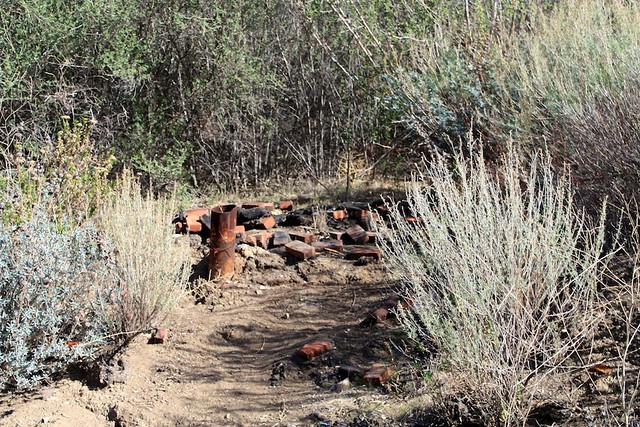 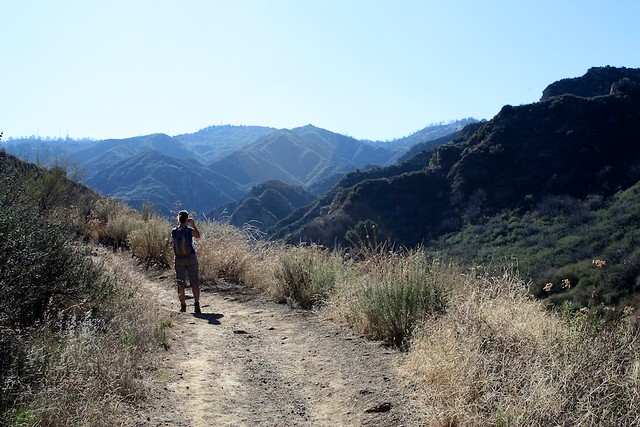 Here, the trail through Towsley Canyon starts up a series of broad switchbacks – ascending about 890 feet over the next 1.3 miles. There’s not a whole lot of shade along this section of trail so it’s probably not something you’d want to be doing in the summer, but on a clear day the views are pretty hard to beat. 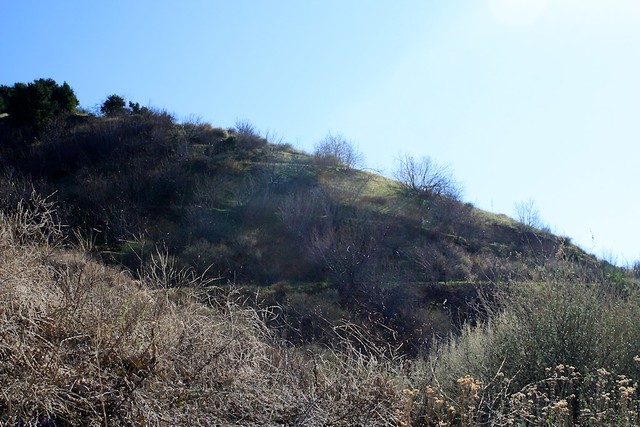 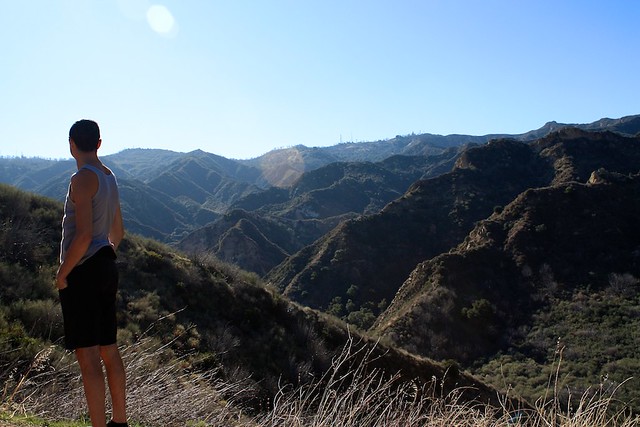 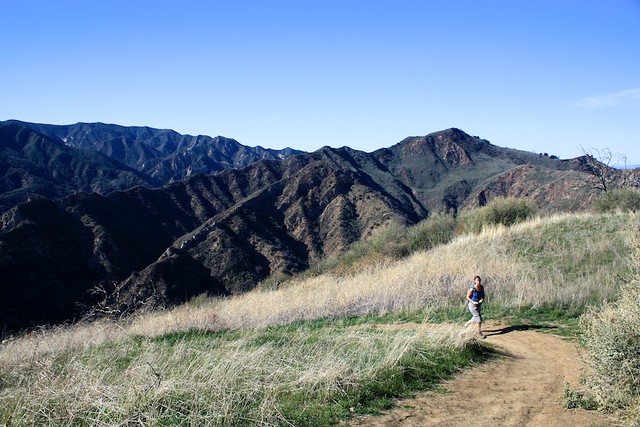 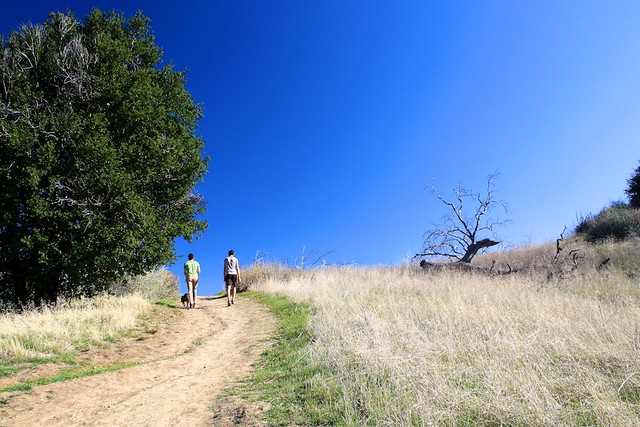 At 2.8 miles, the trail hits a short bump in the ridge and separates into two trails. While it looks like the trail to the left is the official route, the more steep trail on the right will lead you to an excellent viewpoint with a small bench – a great place to take a break after all that incline. 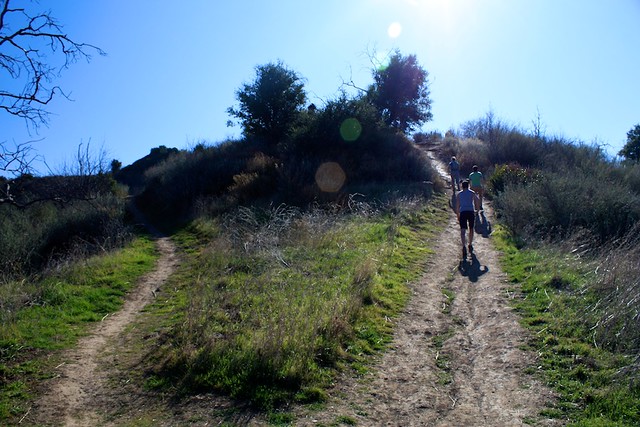 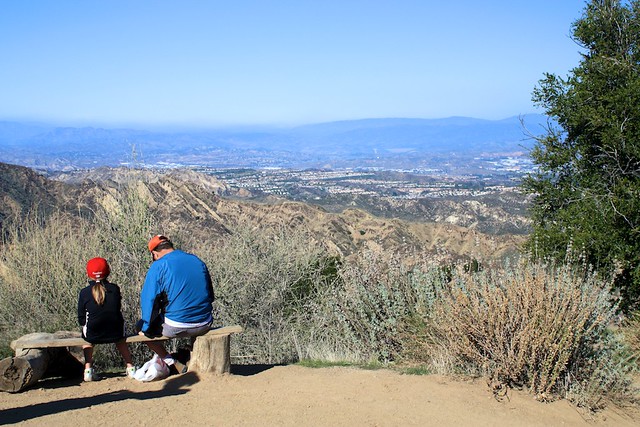 After this, you’ll have a short period of fairly level hiking before starting your descent. The downhill on this part of the trail is comparable to what you just hiked up, but it is a tad more steep in spots. You will, however, have the occasional spot of shade to help keep you (relatively) cool. 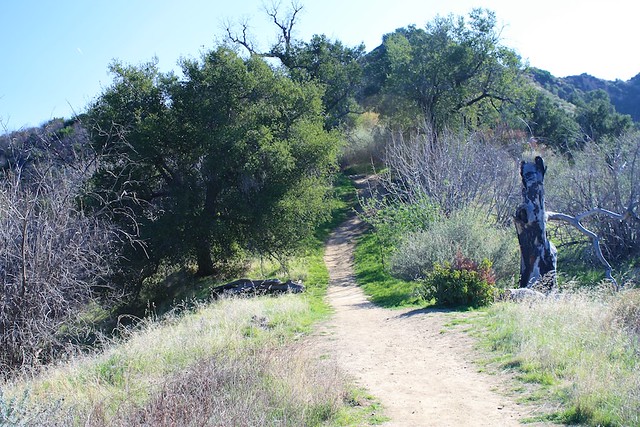 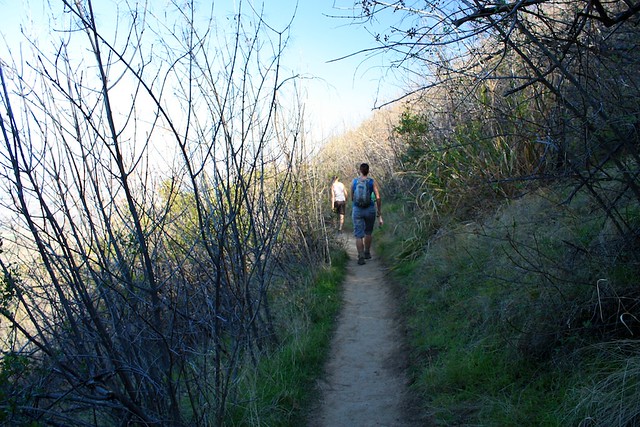 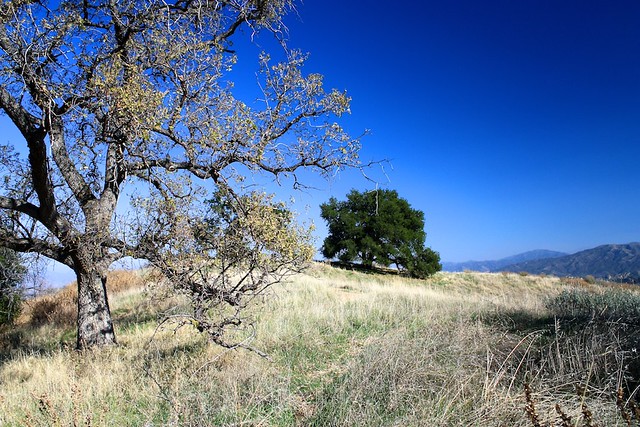 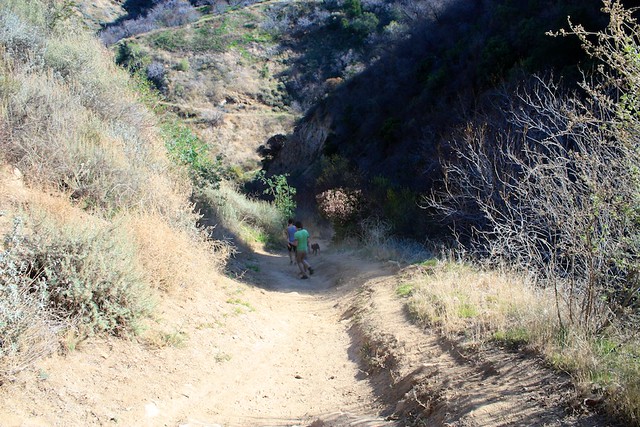 If you look closely across the urban river of I-5, you can also make out some of the firebreaks of the Placerita Canyon Loop, too: 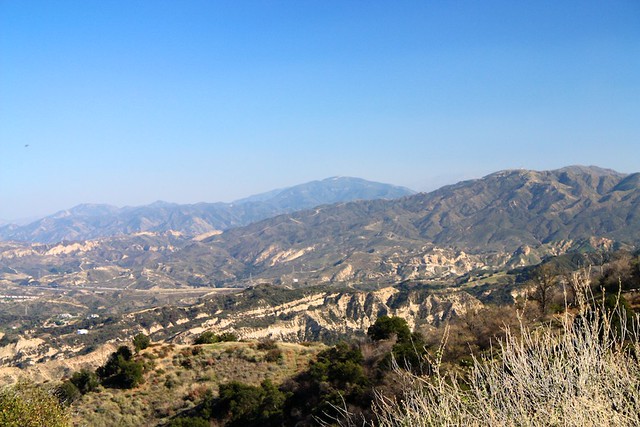 You’ll stay on this trail until the 4.1 mile mark. On the way, you’ll pass a few more spur trails but – like the one that went to the park bench near the route’s high point – they all only lead away from the main route for a very short distance. Most of them will save you a bit of wear on your knees on the way down, as they tend to avoid the steeper sections of the trail.

At the 4.1 mile mark, keep left at the 3-way junction to head back toward the parking area and trailhead.

This section of the trail closely follows another small, tar-filled creek in Wiley Canyon. You’ll pass a few more scramble-able rock formations and some tar deposits bubbling up from the ground on your way back north. At 4.6 miles, keep right at the junction with the Towsley View Loop Trail and continue on the trail until it meets up with the paved road again. Then head back to your car and call it a hike! 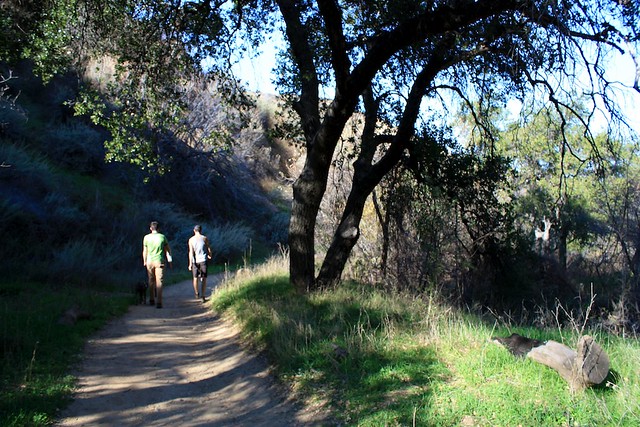 For more information on the history and geology of the Towsley Canyon region (it was slated to be a city dump until the Santa Monica Mountains Conservancy stepped in!), be sure to visit Stan Walker’s meticulously curated page on the area.

Excellent - this trail is very well maintained and well-signed. Junctions are mostly well-marked, often with distances. There are a few unmarked use-trails along the route, but they almost all only veer off the 'normal' trail for a few yards before joining back up.

Take the Golden State Freeway north toward Santa Clarita and take exit 166 (Calgrove Blvd.). Turn west, following the signs for Ed Davis Park / Towsley Canyon. The park will be on the west side of the road very shortly off the freeway. There are three parking areas - the main lot and overflow lot closest to the road are free. There is also a smaller parking lot a bit further into the park that costs $7 to use - but I imagine this is only used as a very last resort.

I did this hike today and was REALLY surprised. Views and surroundings were awesome and trail in good condition. Not what I was expecting and definitely on the list to do again. Thanks for regular review Casey!

I just did this trail yesterday and it was not what I was expecting. Taking it from the other end I was greeted with 2 signs one for the towsley loop trail the other for the canyon view loop 1.9 miles. But it was such a beautiful trail and I look forward to doing it again in the future. (if you see me on the trails I know I'm not wearing shoes :P)

This was definitely one of my favorite hikes when I started hiking in the LA area. It's also one of my top recommendations for people just getting into hiking around here.... great views/scenery, reasonable length/elevation gain, and plus the bubbling tar pits are so cool.
So glad to see you've added it to your list!

ahh my regular go-to hike, I run it in exactly 1 hour, not too far from home and beautiful views at the top :)

This one is a gem. It totally re-energized me when I was suffering a bit of hiker fatigue. Glad you found it and wrote about it. If you check out my post on it, I did it the other way and actually did some side trails which adds to the mileage but still has pretty views. This is a huge recommend to all us SoCal hiking folks!