The hike to the Wisdom Tree via Cahuenga and Burbank Peaks is a rugged three mile out-and-back in one of the newest additions to Griffith Park. This trail features relentless ascents and tremendous views of Griffith Park, heading to a unique lone tree and geocaching area. The trail then traverses a ridge east toward recently-saved Cahuenga Peak with an even more rugged option to continue to Mount Lee and the Hollywood Sign. One of the most fun trails in Griffith Park.

Griffith Park is one of my favorite things in L.A. It’s full of history, great hikes, and is way more rugged than most other major city parks in the country. Unfortunately, because it’s so awesome, the well-known trails can get a little too crowded for my tastes. And unless you’re in the mood to go hike up ridgeline use-trails, most of the hikes are on fire roads.

Enter the Aileen Getty Ridge Trail. This route traverses Cahuenga Peak from the upper Beachwood Canyon neighborhood right to the back of the Hollywood Sign on Mount Lee – and it’s surprising for most people to learn that this terrain was only recently preserved as parkland. The entire region was privately held land since the 1940s and in 2008 a developer announced plans to construct five luxury estates on the land.

An effort led by neighborhood groups and the Trust for Public Land raised enough money to buy back the land from the developer in 2010, with big last-minute donations from the Louis Comfort Tiffany Foundation, Aileen Getty, and Hugh Hefner and now the land is part of Griffith Park.

Park along Lake Hollywood Drive and begin your hike heading east on Wonder View Drive. The pavement ends at a gate and you’ll have a short distance on a dirt road. Look for a high tension power line tower straight ahead. You’ll see the dirt Wonder View Drive continues and a single-track trail splits off to the right. That’s your destination! 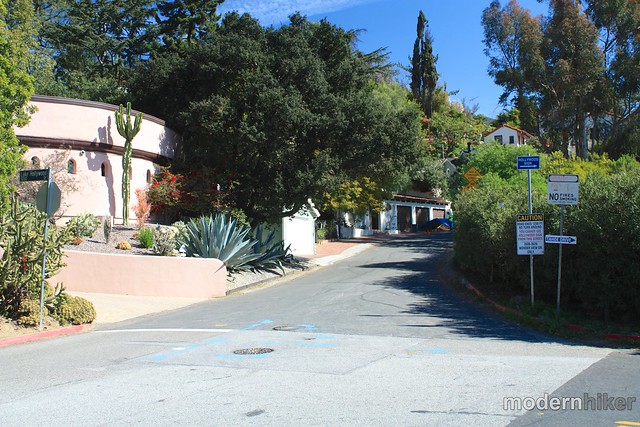 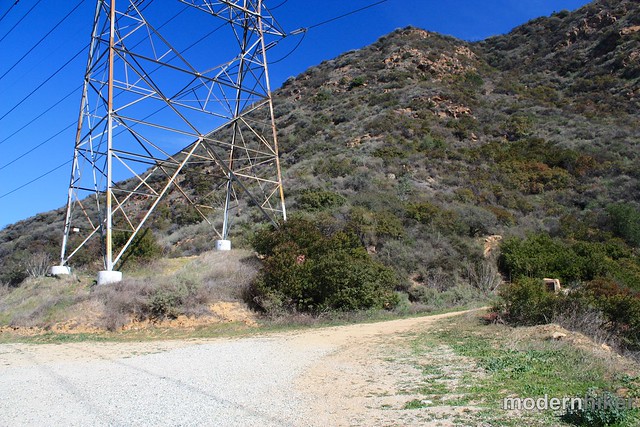 You’ll see a prominent, newly-placed plaque commemorating the land’s protection and listing off some of the donors who chipped in to save it. The trail begins here … and really doesn’t waste any time in starting its climb. 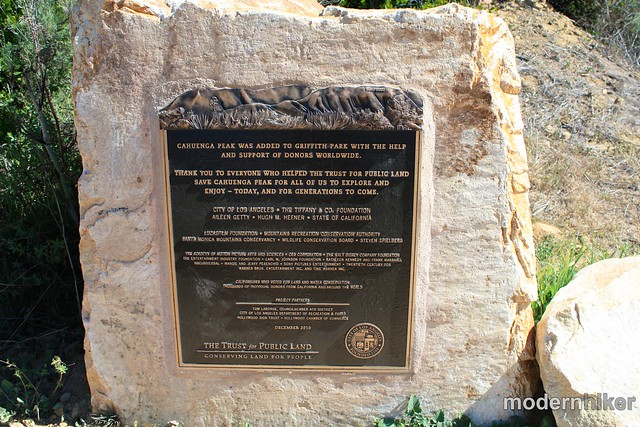 Since this post was originally published, someone has removed this plaque. This is why we can’t have nice things, LA. 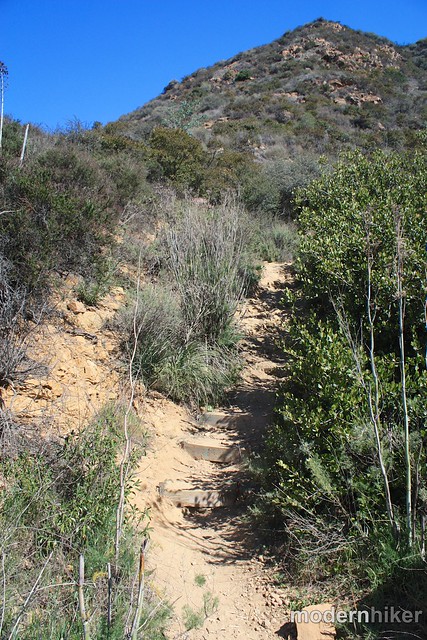 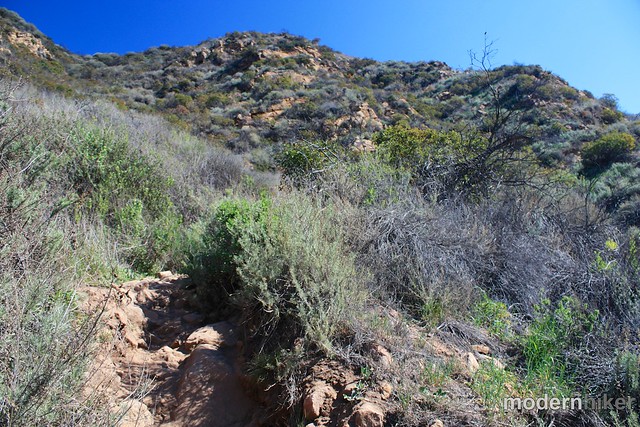 I’ll admit, I was pretty surprised with just how rugged this trail is. In a lot of ways, it’s very similar to the ridgeline use-trails in other parts of the park – it’s very steep, kind of crumbly, and really fun to hike!

You’ll ascend almost the entire gain of the trail before you even hit the first mile mark – it’s about 743 feet of gain in 0.78 miles. But while you’re huffing and puffing (and sweating if it’s sunny out – this trail is almost entirely shade-less), you’ll have amazing views of Griffith Park. If it’s clear, you’ll also be able to see downtown Los Angeles and the Griffith Park Observatory sneaking out from behind the front range. 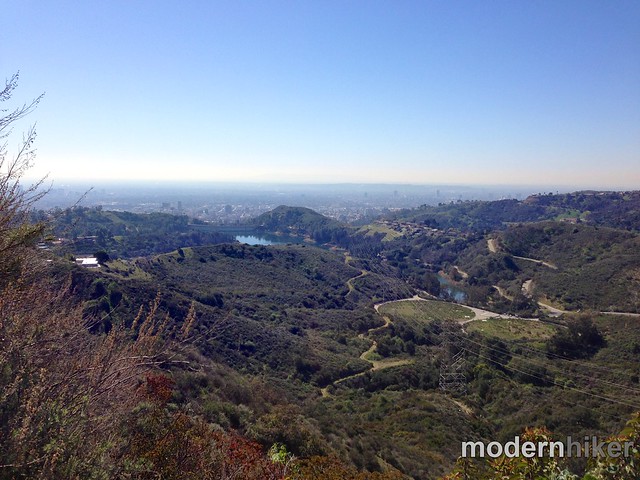 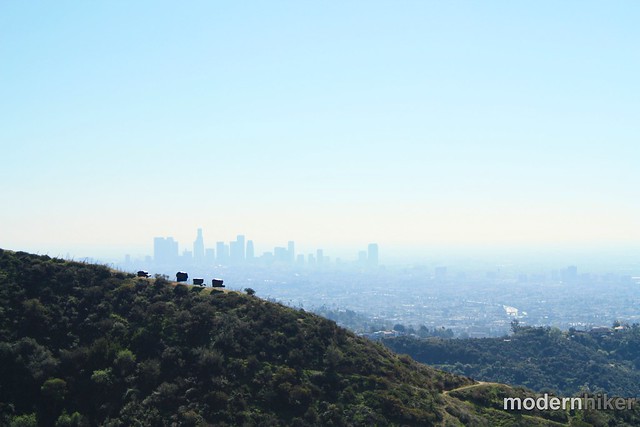 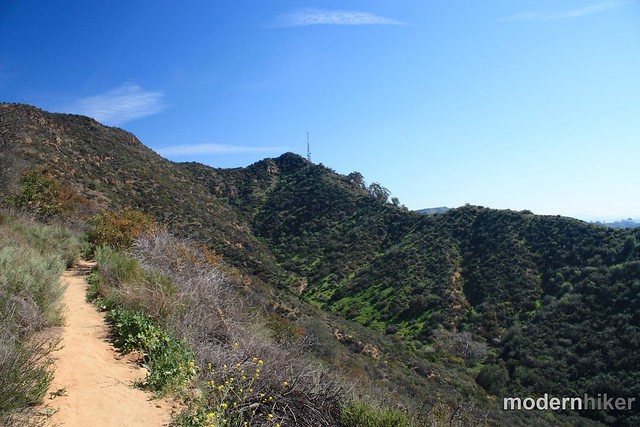 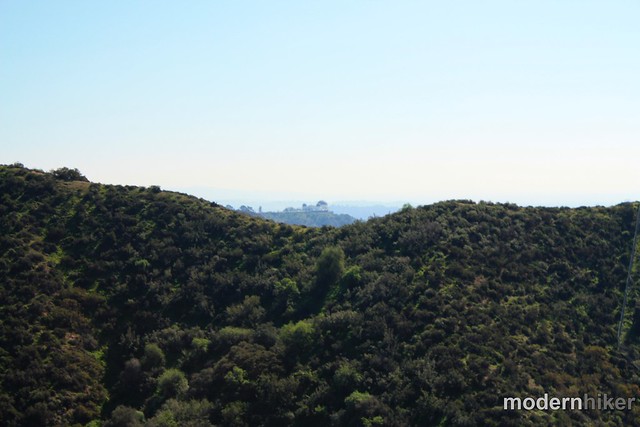 On the last part of this stretch, be sure to watch your footing. Parts of the trail here are a bit eroded and there are some steep drops.

As you approach the 0.8 mile mark the trail makes a sharp turn to the east on a ridge – but be sure to look to your west where you’ll see the lone tree overlooking the city. There’s a short spur trail that will take you to the ledge, where you’ll find shade, amazing views, and a fun geocaching box / summit register. 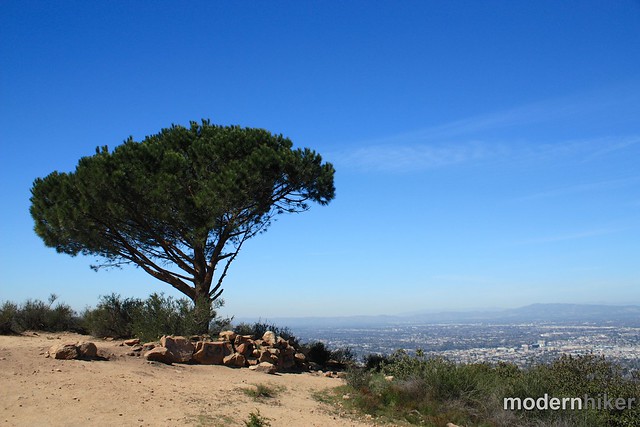 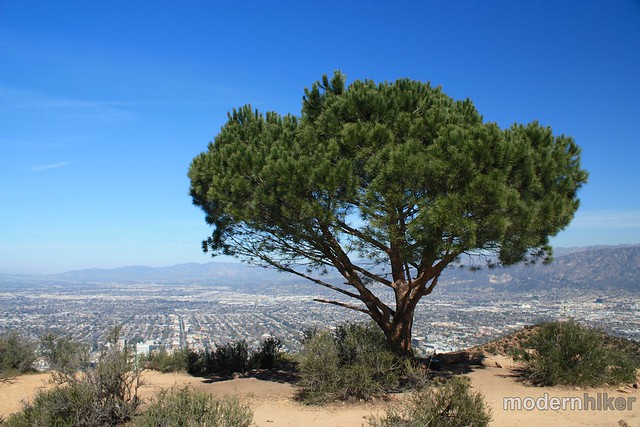 I’ve heard this tree referred to as the Lonely Tree, the Magic Tree, and the Giving Tree (the tree most others call the Giving Tree is in Bronson Canyon) but most often it’s called the Wisdom Tree.  According to the person who operates the Wisdom Tree’s Instagram account, the tree was one of several purchased at a local Vons and allegedly planted by a man who dedicated the trees to his mother in a note inside the original ammo box for everything she taught him about life and the wisdom she imparted to him. The original ammo box also had the hand-painted phrase “Wisdom Tree Wishes” on it, although that box has since gone missing. The Wisdom Tree is the only tree in the area that survived the devastating Hollywood Hills Fire in 2007. This is one of the most interesting and unique places I’ve been to while hiking inside L.A. city limits and it’s definitely worth a visit. When you’re there, be sure to rifle through the geocaching box to see what people have left behind. It’s very L.A. – this is the only summit box I’ve ever seen that was full of business cards for film editors and coupons for local marijuana dispensaries … but there are some great entries in the registers, too. 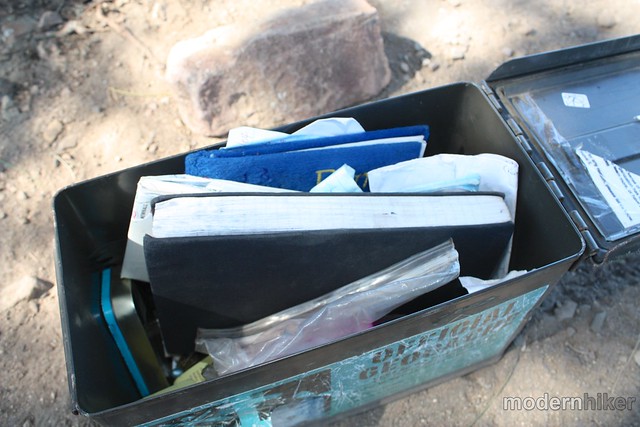 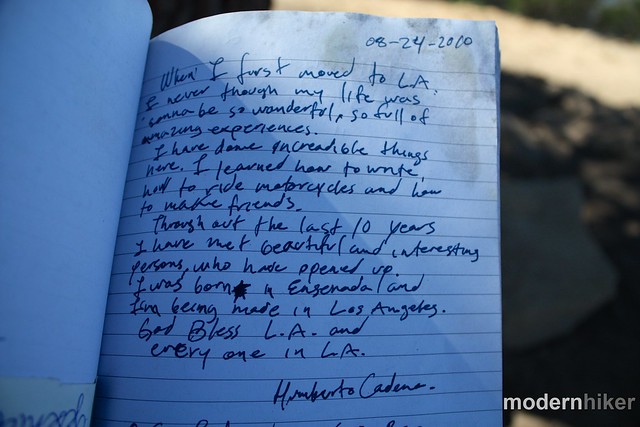 Over the years, this location’s popularity has become a bit of a problem. While it remains a wonderful place to visit and one of the quintessentially L.A. trails for local hikers, the Tree itself is in danger of being Loved to Death. Please, if you visit, only leave your name in the register – don’t tie things to the tree, don’t build rock cairns, and don’t leave trash on the summit. The bins that are there are hauled out by volunteers, so if you really want to be in touch with the spirit of the tree, why not haul some extra trash out on your way back to the trailhead?

When you’re done enjoying the scenery or adding contacts to your Linked In account, head east on the ridge trail. You’ll see your two destinations clearly ahead – Cahuenga Peak and Mount Lee. 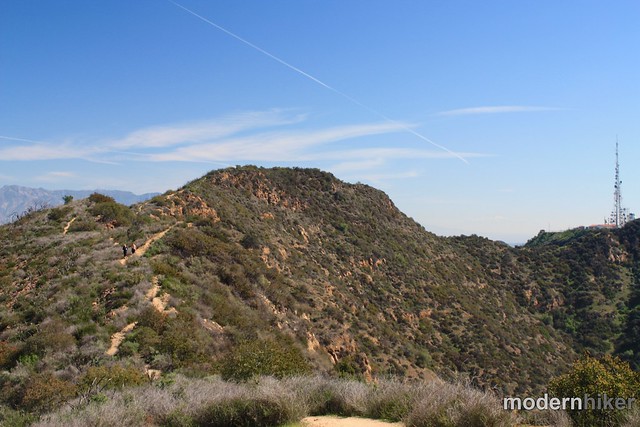 Here, you’ll see plenty of evidence of that 2007 fire. The north slope has recovered quite a bit since then but you’ll notice the brush isn’t nearly as dense and there are still lots of charred branches sticking out from the chaparral. Continue on the ridge as it makes its way toward Cahuenga Peak. 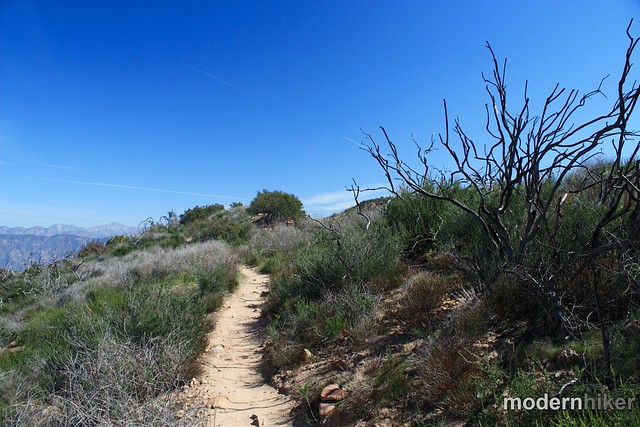 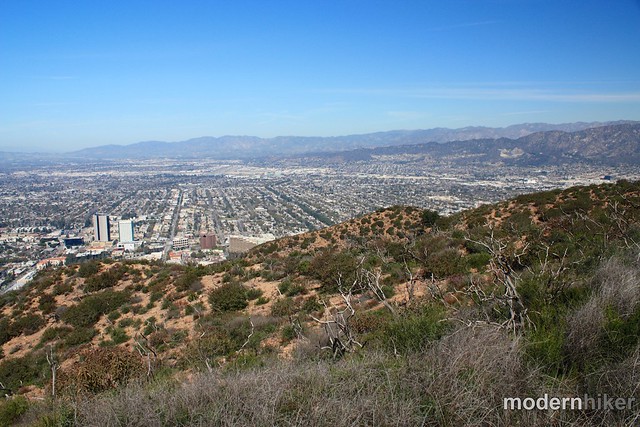 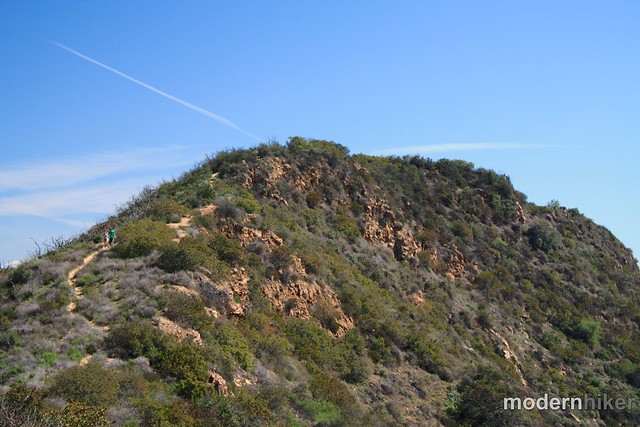 At the 1.2 mile mark, the trail reaches a small clearing near the USGS marker for Cahuenga Peak. There’s not a whole lot to see here and your views are actually better along the trail in either direction. If this is all you want to see today, turn back the way you came – but if you’re up for another extra challenge continue east on the trail toward Mount Lee. Almost immediately, you’ll be able to see a section of this region that was most definitely NOT touched by a 2007 wildfire. 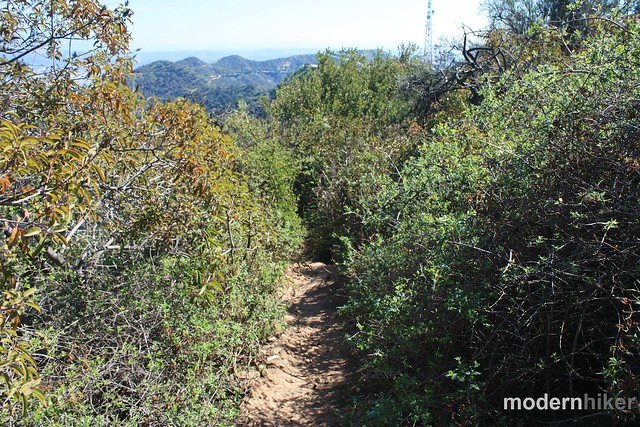 The trail between Cahuenga Peak and Mount Lee is surprisingly tough – there are a few portions where you’ll have to do a bit of scrambling to stay on the trail and a few very steep sections – but as long as you just watch your feet and take your time you should be fine. It’s worth the effort, too – this section of trail is really quite beautiful and it might just be the most fun single-track I’ve done in Griffith Park so far. I didn’t pass a single other hiker on this stretch – and was kept company by soaring hawks, butterflies, hummingbirds and a few rabbits, too! 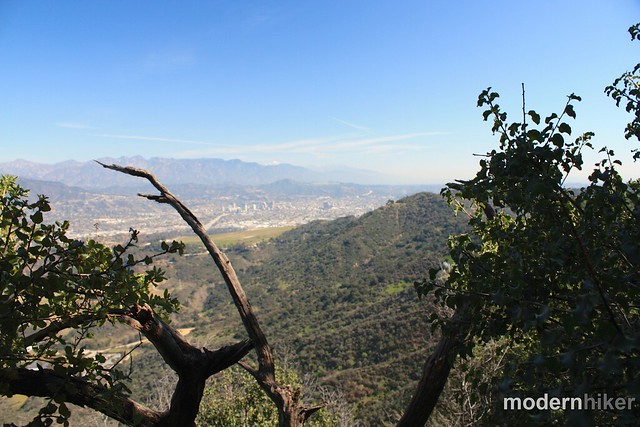 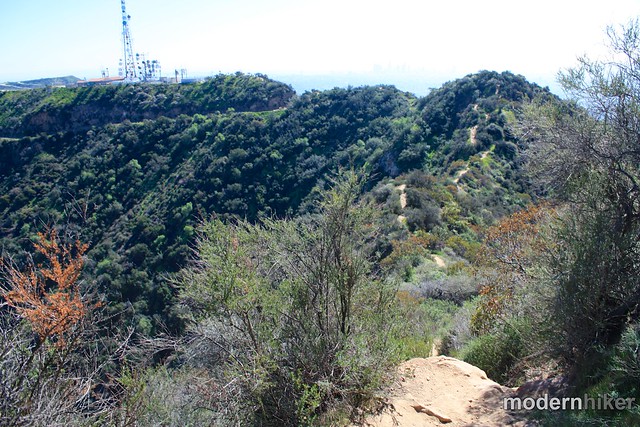 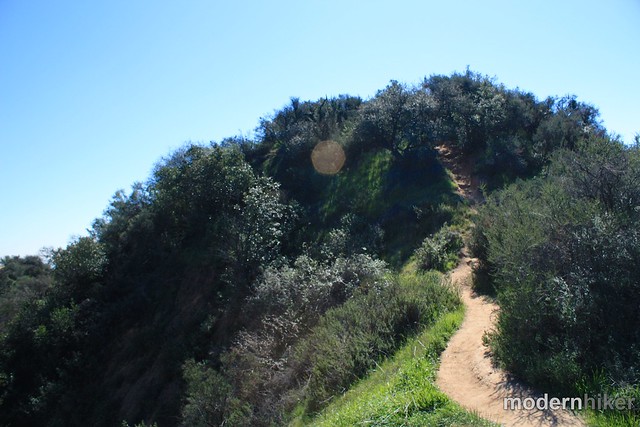 Just before the 1.4 mile mark, the trail meanders into some thick brush but there’s a very short use-trail to an overlook with some more plaques commemorating two of the biggest donors in the effort to save the trail you just hiked from becoming a Kardashian’s sixth house. 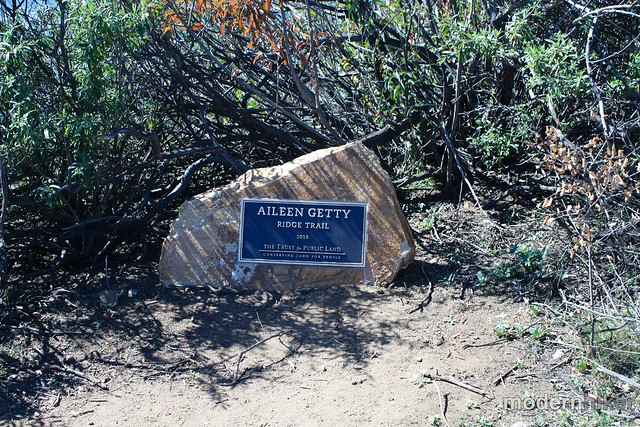 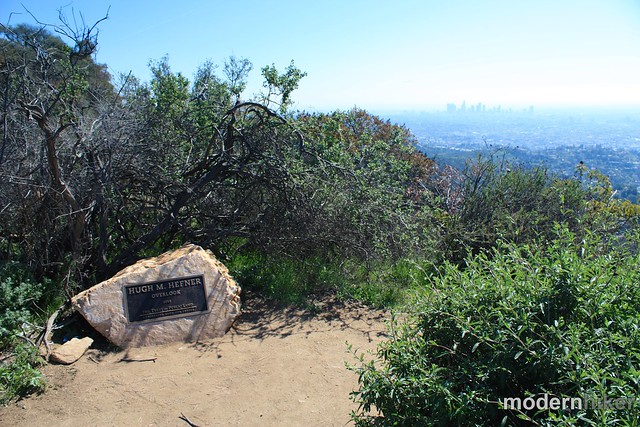 Also, if you look closely, you may see a third, smaller monument: 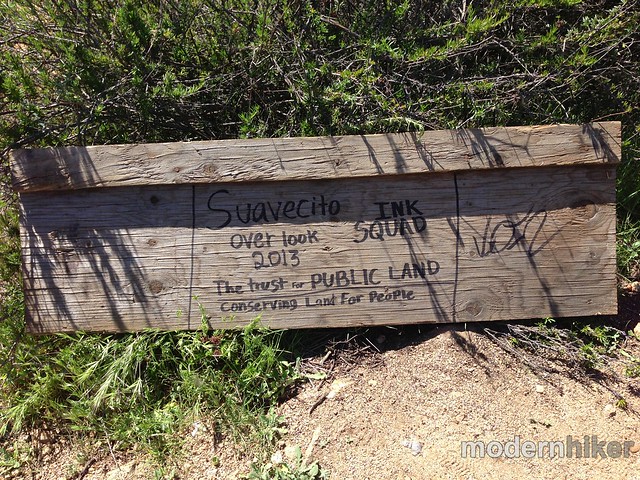 Scramble down to the paved road and round the bend to summit Mount Lee, see the Hollywood Sign through a chain link fence, and watch the more casual hikers take selfies with the city behind them. 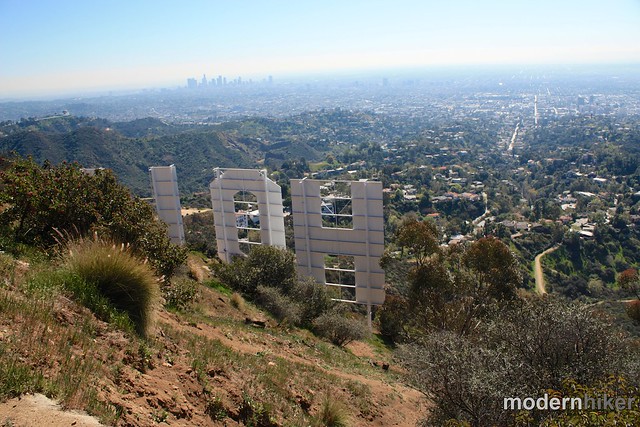 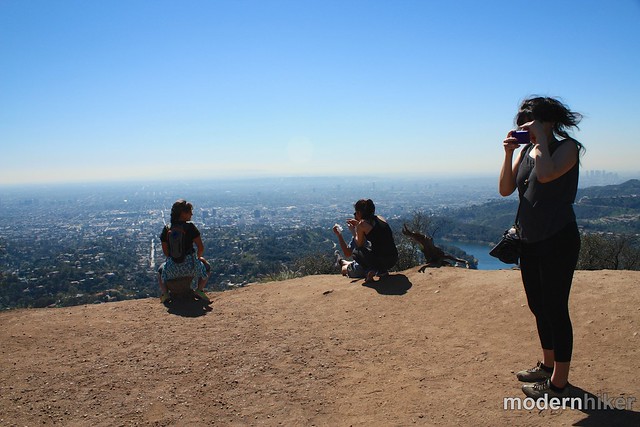 NOTE: While it’s technically possible to hike to the Hollywood Sign, it’s very, very illegal. There are cameras everywhere and usually rangers or police officers are close by enough to catch you. So don’t do it.

When you’re done, return back the way you came – making sure to take your time on some of those steep descents on the way back to the trailhead!

Good. The trail is easy to follow but very rugged and steep. The trail between Cahuenga Peak and Mount Lee is even tougher than the initial climb. Many visitors underestimate this trail -- don't be one of them!

The easiest way to get to the trailhead and avoid the maze of Hollywood Hills roads is to take Lake Hollywood Drive from Barham Blvd. Follow this road through the hills until you see Wonder View Drive heading east. You can't park on Wonder View unless you're a rich person with a driveway, but there's plenty of free parking on Lake Hollywood. No passes or permits needed (although there's no parking between 9PM and 6AM every night).

Is it open now ? I was considering going early morning

Griffith Park is closed during Stay at Home orders as of 4/24/20.

I plan to go here with my boyfriend to see sunrise, but don’t know if the trail is open or not, especially now during the pandamic time. And is there any restriction to the parking that I should have known before going there? Thank you,

You can park on Lake Hollywood Drive, but the parking is limited and tends to fill up quickly. I'd recommend an early start, especially if you're looking to hike on the weekend. Also note that the Observatory is in a different part of the park than this trailhead!

Hey Casey, I wanna do this hike during my stay in LA. I’m thinking May 12th I was gonna get a rental car and see the observatory and do this hike. So is parking mainly on Lake Hollywood Dr? I wanna make sure I’m not upsetting law enforcement or the locals.

Well, you need to remember that it's a public park, not a private dinner table -- and it's a very popular spot for sunsets ... so I'd say bringing in like a picnic or something like that would be fine, but you might want to be willing to do it not on the actual summit. Cahuenga Peak is just a bit to the east and sees less traffic that Burbank Peak / Wisdom Tree. Alcohol is prohibited within Griffith Park boundaries.

Been to the top twice now. Both time left me speechless. The view was amazing. In a few months, my wife and I will be celebrating our 24th wedding anniversary. We are from Indiana, and I want her to hike up here with me. I want to do a romantic sunset dinner up there but wasn’t sure if it’s allowed. Also, can we take wine with us?