From 1915-1916, the city of San Diego held an exposition on the site of what was then known as City Park to commemorate the opening of the Panama Canal. In honor of the occasion, exposition planners re-christened the park after Vasco Nuñez de Balboa, the Spaniard who first sighted the Pacific Ocean during Spain’s exploration of Panama. Many of the buildings and much of the landscaping created from the event formed the basis of what is today one of San Diego’s primary attractions. 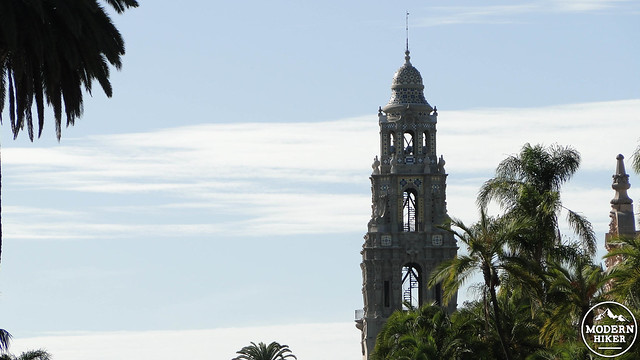 One hundred years later, the 1,200-acre Balboa Park contains a variety of attractions centered on a half-mile-long street partially closed to traffic known as El Prado. The most well-known of those attractions include the numerous city museums, botanical gardens, theaters, the San Diego Zoo, and some flamboyant Spanish renaissance architecture preserved from the 1915-1916 Panama-California Exposition. Many of these structures now house the city’s museums, including the Museum of Man within the lavishly ornate California Building and the open-air botanical building, which houses about 2,100 different species of exotic flowers, ferns, and other unusual plants. 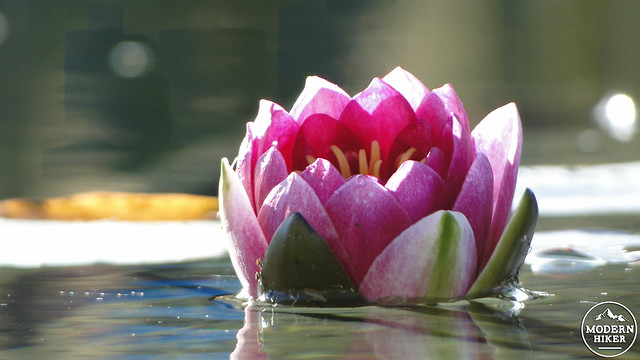 Geographically speaking, the park is perched atop a mesa overlooking downtown San Diego, San Diego Harbor, and Coronado Island. Similar to most of San Diego’s coastal topography, this mesa is an uplifted marine terrace, a formation of solidified and stratified marine sediment raised up from below the ocean’s surface by geologic forces over the milennia. Also like most of San Diego’s coastal topography, the terrace upon which Balboa Park sits is incised with narrow canyons that feature an interesting mixture of native coastal vegetation and exotic species such as palms and eucalyptus. 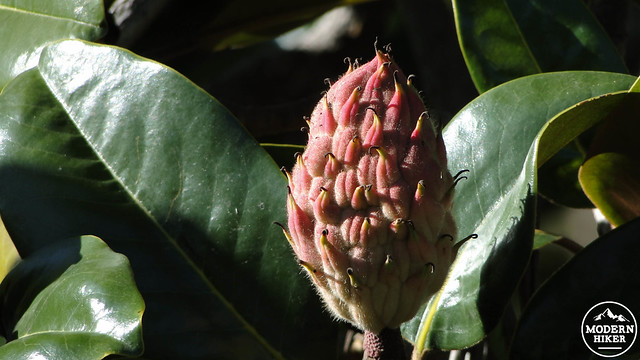 The intersection of culture, history, horticulture, and natural features combine to make Balboa Park San Diego’s most diverse and enriching urban hike. The route contained herein, along with additional connecting routes to the wilder, undeveloped east and the more developed west sides of the park, allows visitors to experience a little bit of everything that one of San Diego’s crown jewels has to offer. 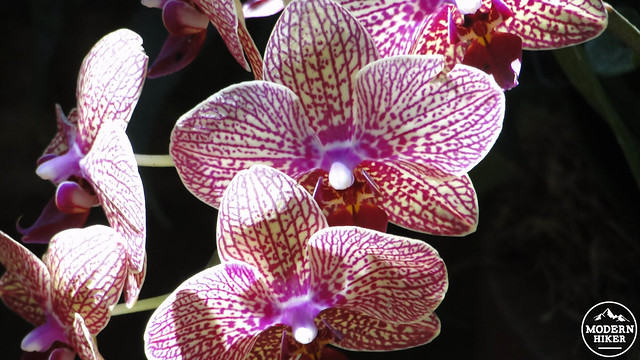 A good place to start is the parking lot immediately south of Spreckle’s Organ Pavilion. The organ itself is worth a visit, especially if there’s a scheduled performance in the immediate future. In this broad, open-air amphitheater originally built for the exposition, you’ll find one of the world’s largest outdoor pipe organs. From the lot, walk due west across Pan America Rd and the Pan American Plaza until you reach the rim of Palm Canyon. 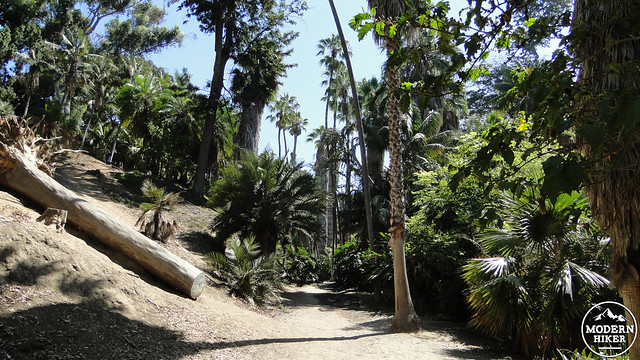 At Palm Canyon, find the steeply-switchbacking trail down to the canyon’s floor. Once there, turn right and commence a cool, shaded stretch up-canyon through a grove of planted palms. Within this 2-acre canyon, you’ll find over 450 palm trees, including a group of Mexican fan palms over 100 years old. After .3 mile, the trail reaches a wooden staircase that climbs out of the canyon. You’ll notice a massive ficus tree on your left; its elaborate root system branches out for a dozen yards in all directions. 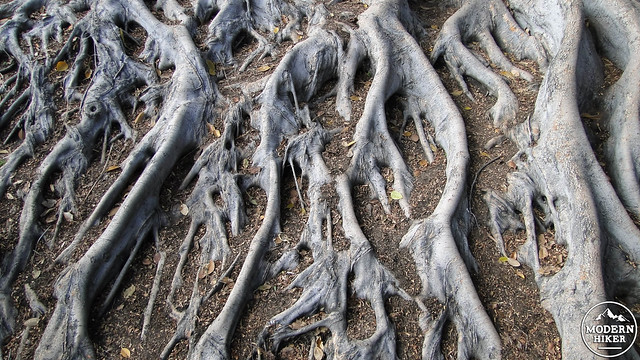 At the top of the stairs, turn left and walk about 50 yards along the north edge of a parking lot to a gateway leading into a garden. This is Alcazar Garden, which architect Richard Recqua patterned after the gardens in the Alcazar Castle in Seville, Spain. Here you’ll find rows of flowers, often roses, and tiled mosaics in the Moorish style. 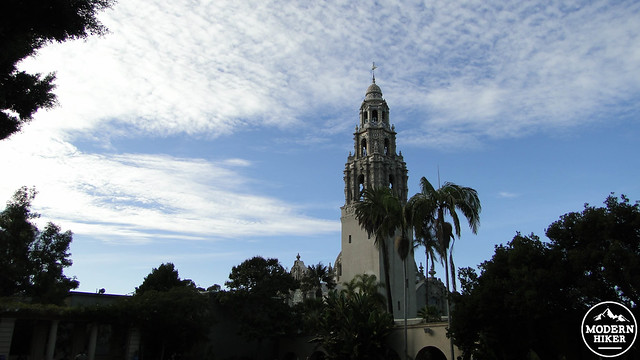 Exit the gardens from the north side and step out onto El Prado. Turn left and walk about 50 yards into the courtyard for the elaborate California Building. The park’s signature building is a mashup of Spanish and Mexican architectural influences, and its bell tower is usually visible throughout much of the park. If you look to the west, you’ll see the Cabrillo Bridge stretching across a wide canyon through which runs the Cabrillo Freeway. Walk out about halfway across the bridge to enjoy a view over downtown San Diego. 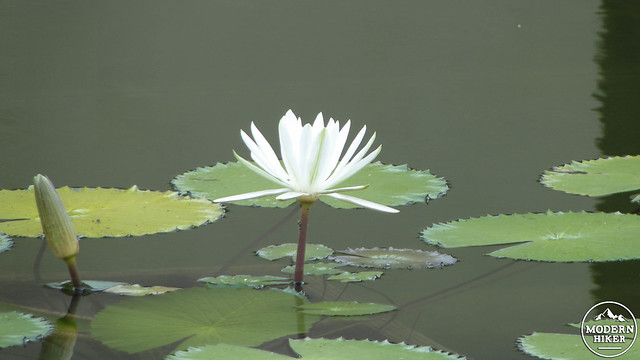 For further exploration and an additional 2.5 miles of walking, you can continue west across the bridge to hook up with the Jerry Schad Memorial Trail. Shortly after the San Diego hiking guru’s death in 2011, the city’ parks and recreation department and the Balboa Park Trails Committee re-christened Trail 43 in honor of Schad’s contributions both to the park and to outdoor recreation in San Diego County through his articles in the San Diego Reader and his series of hiking guides for the county, Afoot and Afield in San Diego County. 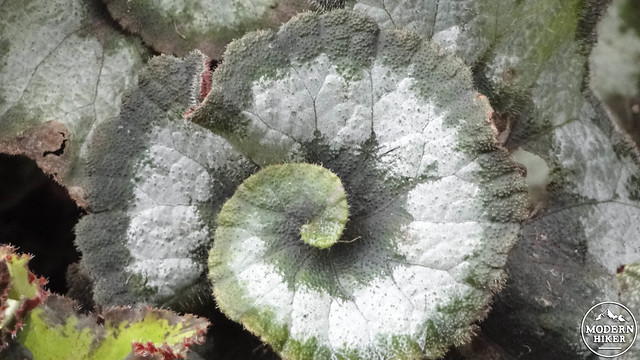 Following the Schad Memorial route is fairly simple; follow signs indicating Trail 43, which forms a narrow loop around the park’s western edge. You’ll pass through planted groves of pines, cypresses, and redwood, and you’ll get a chance to visit the quirky botanical path dubbed “The Five Flavors Walk,” where you can learn about edible plants (no snacking, please). 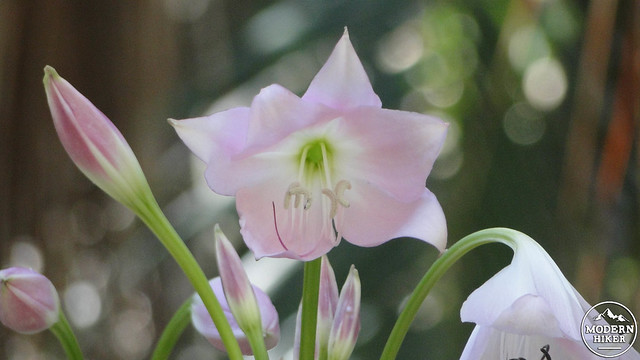 If you elect to stay on El Prado, make an about-face and begin walking east. Throughout this stretch of the route, you have the option of stopping in at any one of half a dozen different museums arrayed along the El Prado’s promenade. You may also wish to wander in and out of a number of different features just off the El Prado, including the Sculpture Garden, Old Globe Theater, and the Plaza de Panama. 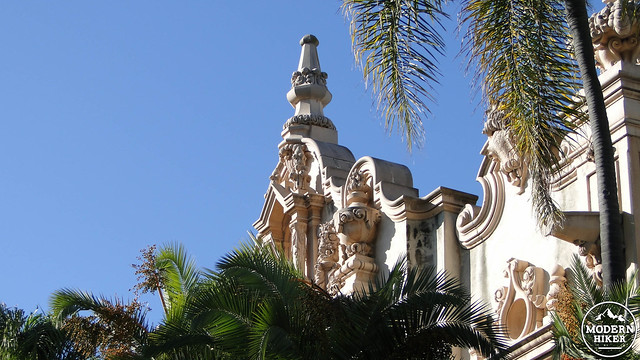 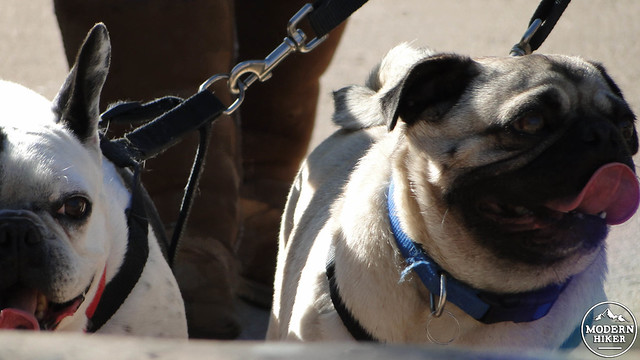 Regardless of which buildings and museums you explore, be sure not to miss the Botanical Building. This open-air exposition structure presides over the scenic lily pond while housing 2,100 different species of exotic, usually tropical plants. Their orchid collection is particular impressive, although any one of their plants invite curiosity as you stroll through the coolly humid building along narrow paths. 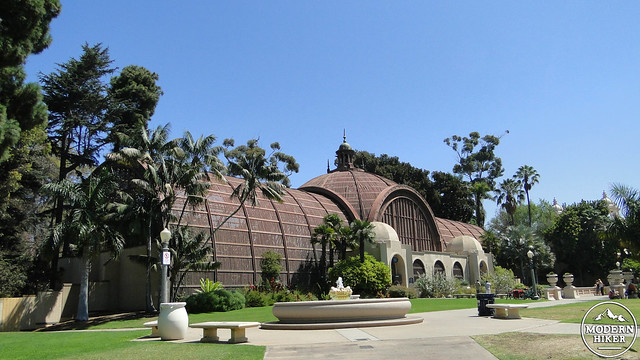 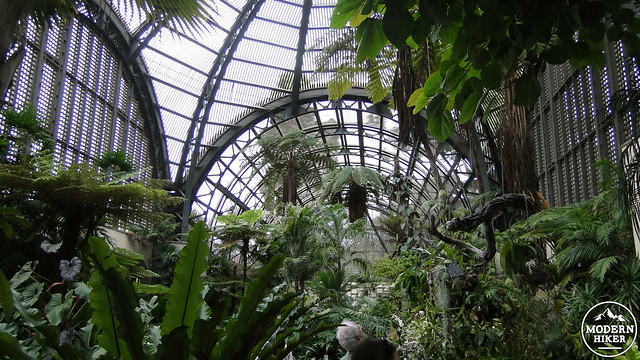 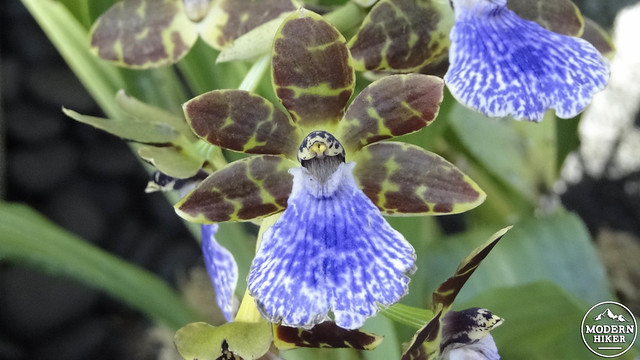 Continuing west, you’ll come to the Bea Evenson Fountain, where people of all shapes, sizes, and colors congregate on any given day. Just west beyond the fountain, follow the raised footbridge over Park Blvd. to arrive at the Desert Garden on your left and the Inez Grant Park Memorial Rose Garden on your right. The Desert Garden features a bewildering array of desert vegetation, including exotic and local species. The circular rose garden features several arching rows of rose bushes of myriad colors. A nearby shaded patch of grass or a nearby ramada provide opportunities for picnicking. 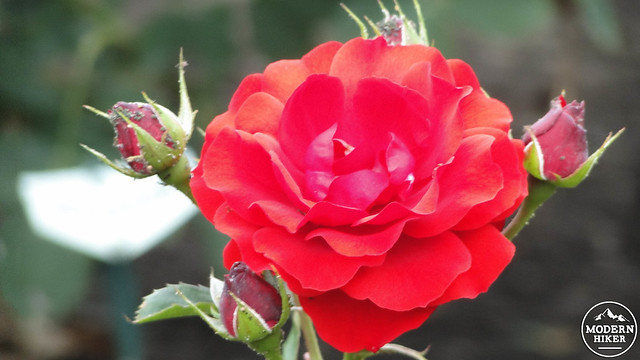 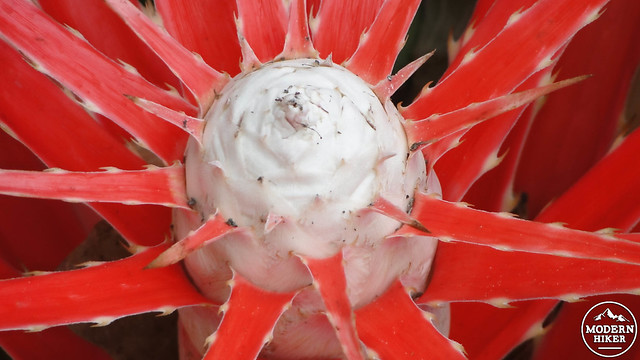 If you wish to explore the park’s wilder side, find the switchbacking trail directly east from the footbridge that descends into Florida Canyon. Although Florida Canyon’s scrubby and sometimes scraggly vegetation may seem like a bit of a letdown after the manicured horticultural brilliance of the features around El Prado, the vegetation in the canyon is more reflective of what San Diego’s ecosystems are really like. Turn off the water in El Prado, and not much would survive. Here in Florida Canyon, you’ll experience a swath of coastal sage-scrub habitat that comes alive with vivid color and enticing scents throughout the wetter part of the year. You can construct your own loop up to 3 miles within the canyon. 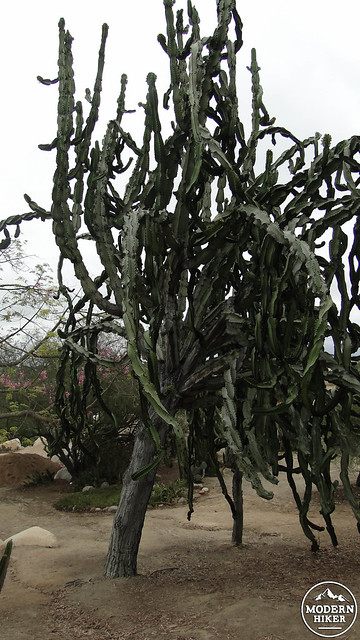 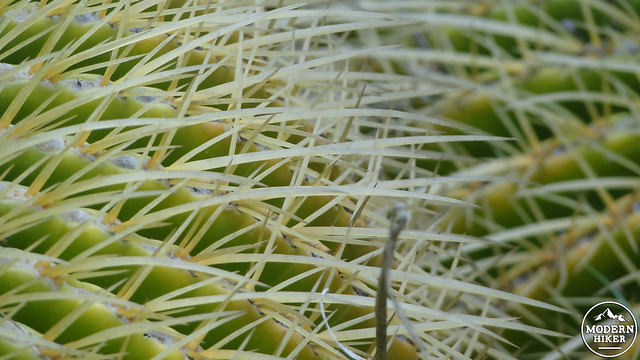 To conclude the loop, retrace your steps along the south side of El Prado. If you keep to the main street, you can enjoy the architecture, museums, street performers, and people-watching that the promenade is famous for. Or, you can dip behind the museums to find a couple of tiny gardens – the Zoro Garden and the Casa del Rey Moro Garden. The latter garden is a popular spot for weddings, and from its fountain you can overlook the Japanese Friendship Garden tucked into a canyon just below. If you haven’t picnicked on this route and you’re starting to feel a bit hungry after all of this poking around, you can stop in for an al fresco lunch at the Prado at Balboa Park restaurant. 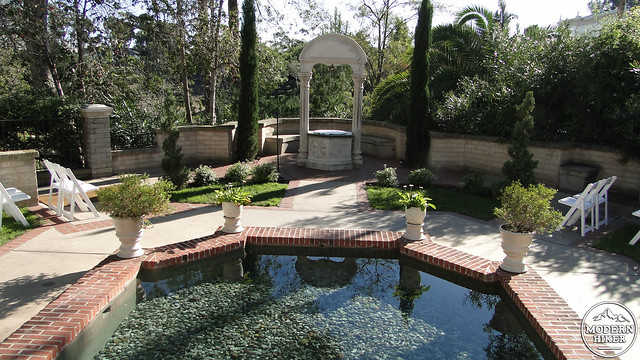 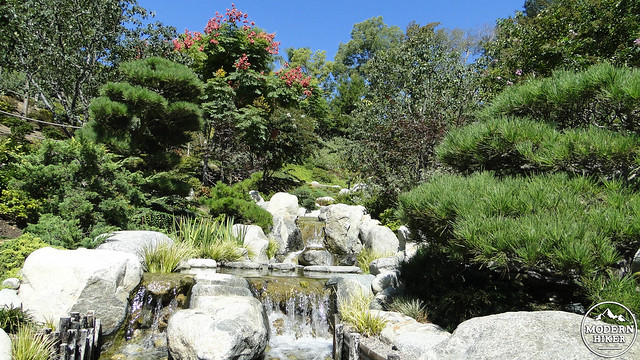 The Japanese Friendship Garden is also a fine place to pop in for a stroll through more well-manicured paths. This garden continues to undergo renovation, but there are a number of paths you can walk to admire some beautiful horticulture. 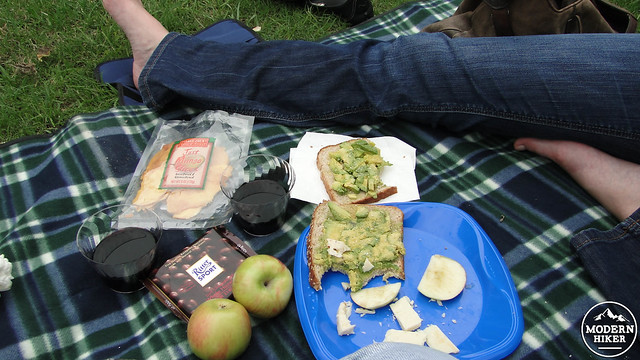 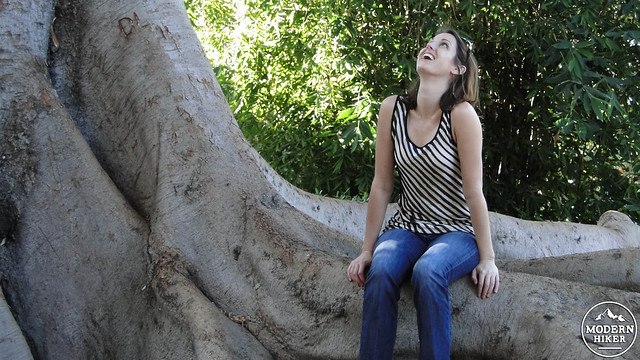 The organ pavilion lies just to the west of the Japanese Friendship Garden. To the south of this is the parking lot from which you started. 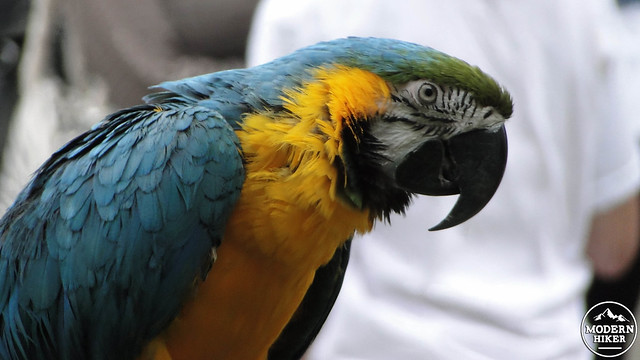 There is very little true trail along this route; most of it occurs on the pavement. The trails within Palm Canyon and Florida Canyon and generally well-trod and easy to follow, although Florida Canyon can get a bit overgrown in some spots.

Southbound traffic arrives from I-5 or Highway 163. Exit at Park Blvd and head north as it completes a wide arch from I-5. Drive north for about 500 feet and then turn left onto Presidents Way. After .2 mile, turn right into the Spreckels Organ Pavilion parking lot (just south of the organ pavilion). If traveling northbound on I-5, exit at B Street and travel west (toward downtown) for .4 mile. Turn right onto Park Blvd and travel north into Balboa Park for .6 mi, then left on Presidents Way.

Thanks for the kind words! I'm glad you enjoyed the post.

Scott, thank you for another great, info filled post. I really enjoy reading your reviews and always learn something new about the areas or history of a the regions your profile. Thanks again.