An under 6-mile trail in Devil’s Postpile National Monument. This is spectacular Sierra scenery all around, with the Wild and Scenic San Joaquin River, several waterfalls, and the Postpile itself – an exquisite example of columnar basalt. While the Monument itself is small, it is nestled within the Inyo National Forest, with plenty of opportunities for camping and backpacking on longer trails.

*** The Devil’s Postpile gets a ton of snow. As a result, it is usually only open from mid-June to early October. Before you head up north, check with the Rangers by visiting the Monument’s website or calling 760-934-2289. Visitors planning on using the shuttle service should also call that number for rates and schedules.

*** Backpackers planning on staying in the Inyo National Forest may need a Wilderness Permit. Call 760-873-2485 for more information.

If, on a future trip to Yosemite, you decide to come back down the eastern side of the Sierras, you may want to make a little side trip up to Mammoth Lakes. You already know about the skiing and snowboarding opportunities there, but tucked behind the touristy areas is a tiny National Monument with some pretty spectacular scenery. Once part of Yosemite National Park, the area was split off when gold was discovered nearby, and the namesake basalt formation was almost destroyed to make way for a hydroelectric dam. But in 1911, it was made a National Monument and eventually surrounded by National Forest land.

Today, the 798-acre Monument is a great place to hike, either as some short day hikes or as a starting point for longer backpacking trips in the Inyo National Forest. After you ditch your car at the Mammoth Mountain ski area and take the treacherous shuttle ride into the park, you can start your hiking at a number of stops along the way. For this route, take the shuttle to stop 6 – the Ranger Station – and tighten up your boots. 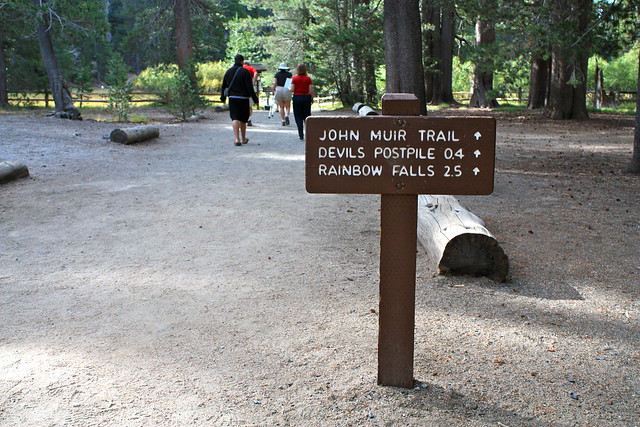 The Postpile itself is only 0.4 miles from this spot, so expect some heavy foot traffic on the early part of the trail. Just enjoy the easy and level hiking path, and be sure to look to your right to see a gentle bend in the Middle Fork of the San Joaquin River, which ends up irrigating a great portion of the San Joaquin Valley to the west. 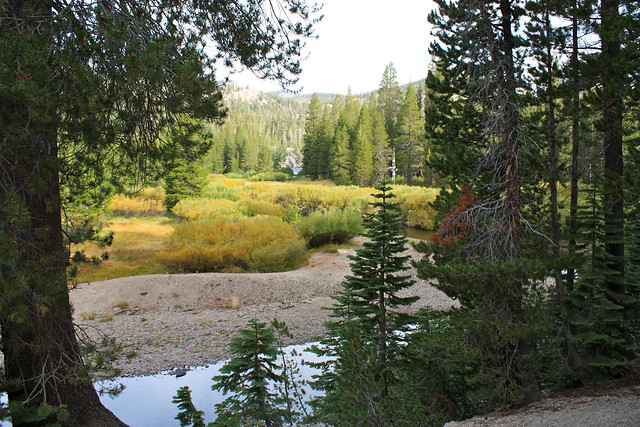 In only 0.4 miles, you’ll reach the Devil’s Postpile, a 60-foot high wall of columnar basalt. 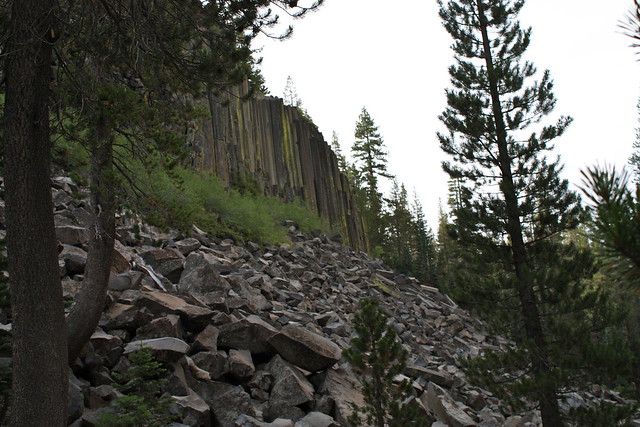 Be sure to hike around the bottom of the formation for some great perspective on the formation, which was created when a uniform density lava cooled under heavy pressure. Many of the hexagonal chunks at the base of the cliffs are larger than a person! 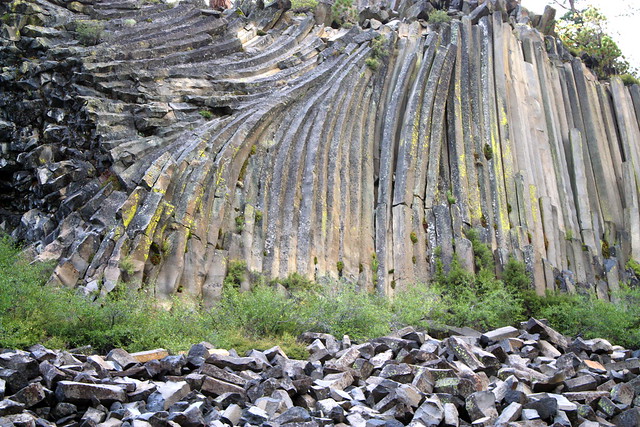 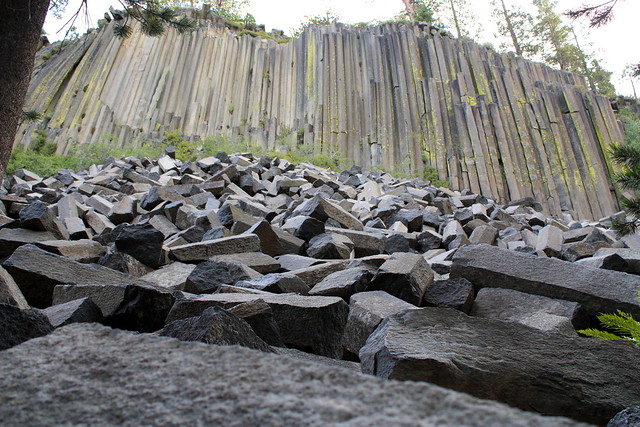 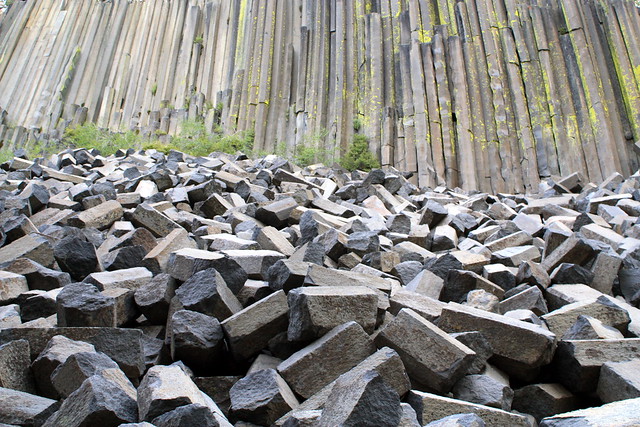 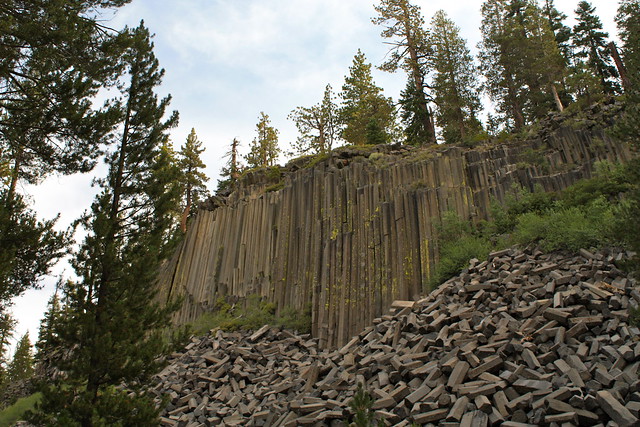 When you’re done soaking in the grandeur, be sure to backtrack to the northern edge of the Postpile for a quick climb to the top of the formation. It’s one of the steepest climbs on this route, but it’s very manageable. When you get to the top, you’ll have some pretty decent views of The Buttresses to your west, as well as the smooth top of the basalt itself, worn down by a massive glacier: 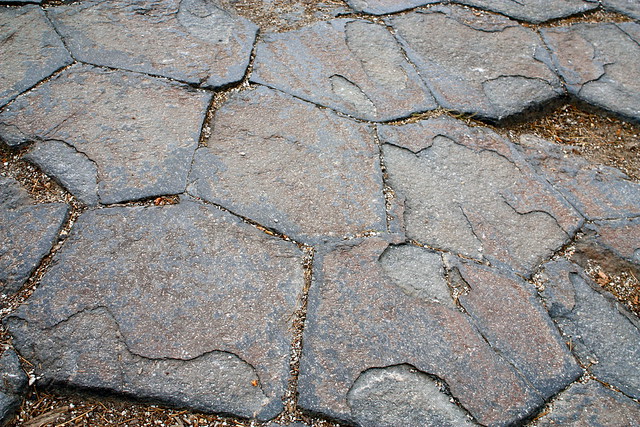 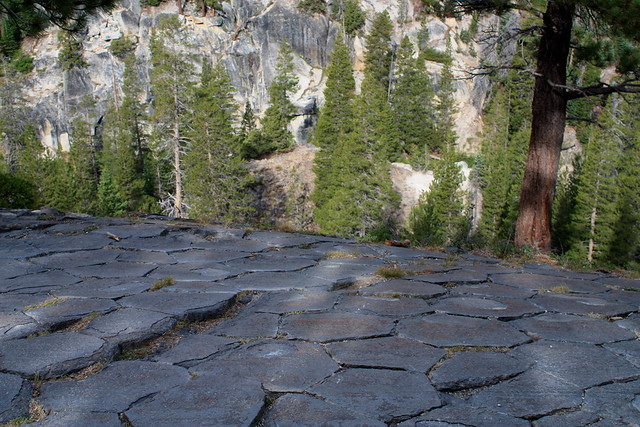 The trail descends to the south of the Postpile and continues south, popping in and out of the National Monument boundary as it goes. At the 3-way junction, keep right and ignore the trail to Reds Meadow to continue toward Rainbow Falls.

This section of the trail is a gently descending route through some very pleasant forest before hitting some of the remnants of the 1992 Rainbow Fire, which burned more than 80% of the Monument. 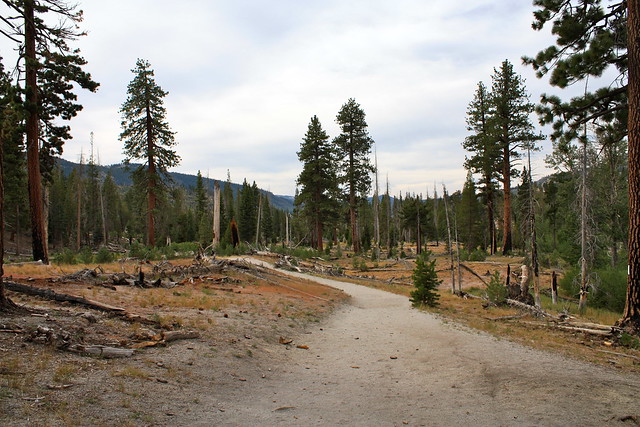 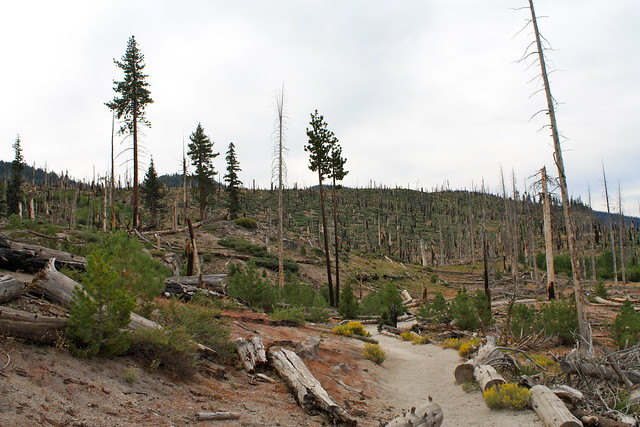 The forest is definitely on the rebound, but even 17 years after the blaze, parts of it are still pretty barren. While I was hiking this trail in late 2009, I was unaware that the Station Fire was just beginning to rage in the Angeles National Forest. Nature does repair itself, but it doesn’t work on a human time scale.

At about 2.6 miles, continue right at the 3-way junction to enter the John Muir Wilderness and head toward Rainbow Falls. Hop over Boundary Creek and stay right at the junction with the Fish Creek Trail. You’ll hear the roar of Rainbow Falls well before you can see it – and when you finally do see the 101-foot cascades, it’s very impressive. 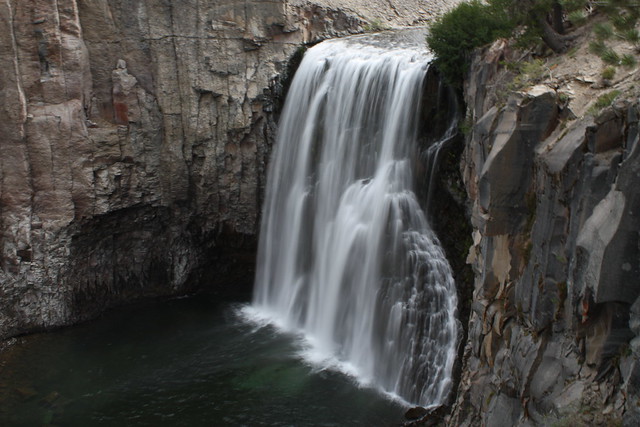 There’s a very nice overlook of the falls from the rim of the river canyon, but you can also hike down a steep trail cut into the canyon wall to approach the bottom of the falls. It’s well worth the effort. 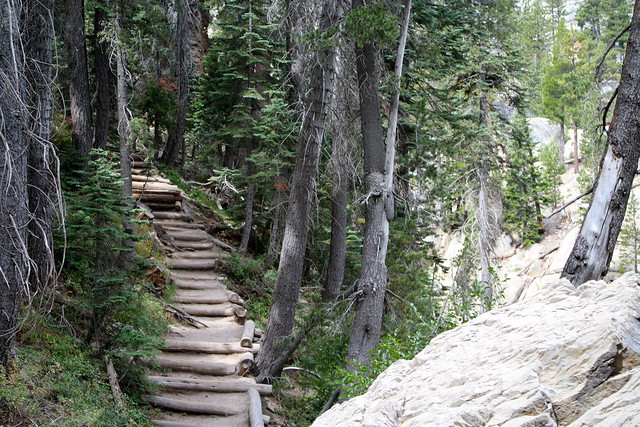 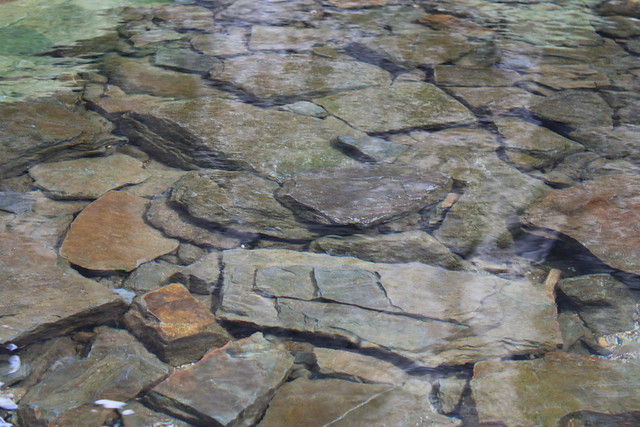 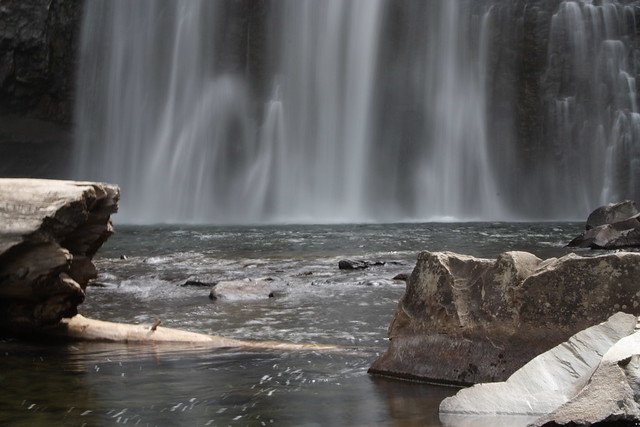 For a little more rugged hiking and some more up-close-and-personal time with the San Joaquin River, climb back up to the overlook and continue west to the Lower Falls. Here, you’ll probably have the trail to yourself, and can fully enjoy the peacefulness around the riverbanks. 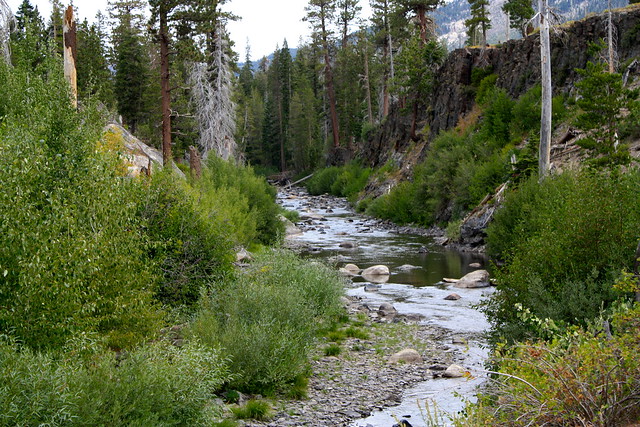 The Lower Falls are about 0.8 miles from Rainbow Falls, and while they’re not nearly as impressive, you can still scramble down to the pool below and soak in all the scenery. 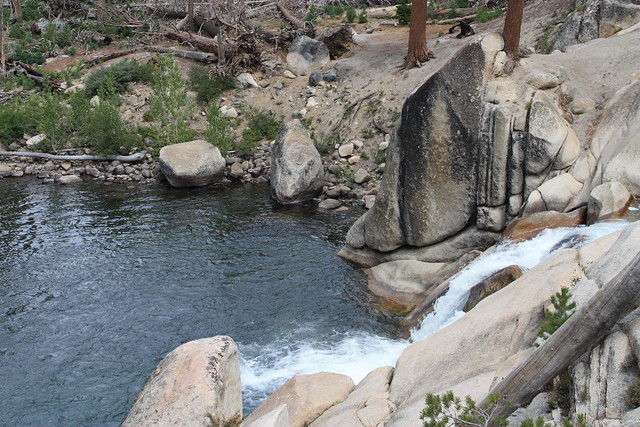 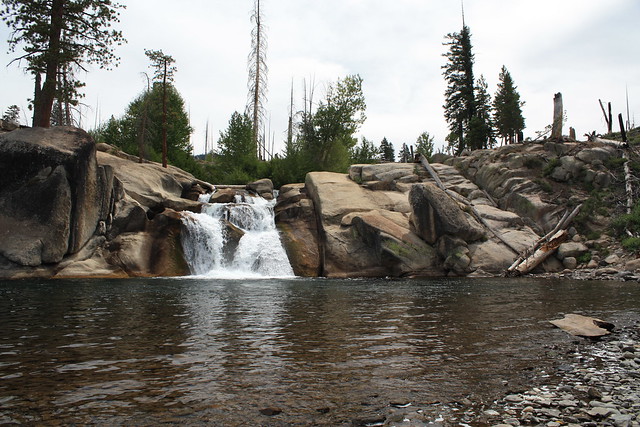 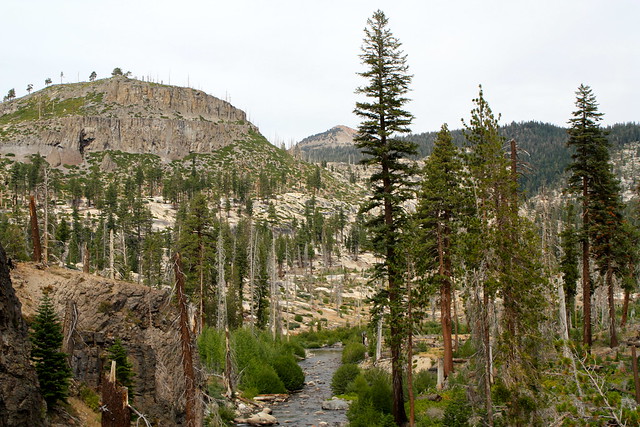 When you’re done, backtrack toward Rainbow Falls, this time veering to the right after crossing Boundary Creek. The trail climbs back up to Minaret Road at Reds Meadow Resort – a small equestrian stable and general store. 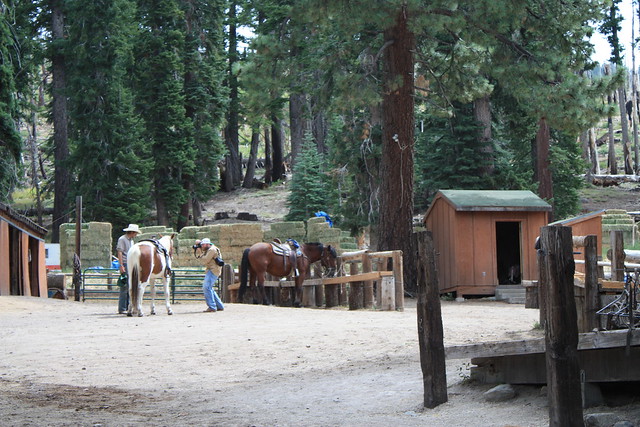 Chill out a bit here and grab a bite to eat, or just wait for the Shuttle to make another round to take you back to your car.

Very good. This route is pretty easy to follow, but there are several trail junctions with pack trails, other trails, and the Pacific Crest and John Muir Trails along the way. Thankfully, everything is well marked.

There are 20 first-come, first-served sites in the Monument. Campground is generally only open during the summer, and campers are the only exception to the shuttle system. Campground has water and flush toilets.

From Mammoth Lakes, CA, continue driving up Minaret Road (CA-203) until you reach the Mammoth Mountain Ski Area. You will have to park your car here and take a shuttle into the Monument itself if you're hiking. If you are camping at one of the campgrounds in and around the Monument, you are allowed to drive a personal auto into the Monument - but be warned - it is a very narrow and treacherous route.

My family did this yesterday. It was my trial run after ankle surgery this spring. It was great, not too strenuous, and the falls were absolutely gorgeous.

So nice! We are hoping to go camping there this year with our kids.

Nice write-up. I hope to do this hike in August. Since we had a lot of late snow this year, the waterfalls should be raging.

I was as far as Minaret Vista on the 23rd of June and found the road closed into the Valley, so I hiked along the ridge in some snow to Deadman's Pass. Fun!

You can find the current road conditions at this nps website:

I want to go for camping there soon as well, so keeping an on the current road opening updates as well.

Nevermind. I just read the post closer and see your hike was from last year. Anyone have a scouting report on current conditions? I spoke to someone there two weeks ago who said the road to the Postpile would hopefully be open this week, and that the snow was now starting to melt pretty quickly.

Great write-up, as always. Did you just do this trip? We're headed there in two weeks and were hoping to do that hike but were concerned there might still be too much snow. Apparently not?

I've been to the Devil's Postpile a number of times, as Agnew Meadows is my favorite trailhead for backpacking. I'll be stopping there again when I hike the JMT this summer -- 30 years after my first JMT thru-hike.