A moderate trek around one of the most breathtaking natural landmarks in the region. A hike to Devil’s Chair gives you panoramic views of what happens to the ground near one of the most active seismic zones in the world. With the right gear, this is a beautiful winter trek – especially after the Punchbowl and San Gabriels get a dusting of snow.

The Devil’s Punchbowl Natural Area is one of my favorite parks in the San Gabriels. Hidden on the northeastern range of the San Gabriels – far away from us city slickers – the otherwise flat high desert is slowly being ripped and bent into odd angles by the tearing of the San Andreas and Punchbowl Faults, with the resulting canyons further eroded by the wind and water from the 8000+ft peaks right to its south. I’ve never seen anything like it before, and every time I catch the first glimpse of the formation from the road, I’m still awestruck.

On this particular day, I came after a weekend of on-and-off precipitation, which at this elevation was snow. The Punchbowl was lightly dusted, which served to highlight the jutting slabs of sandstone. 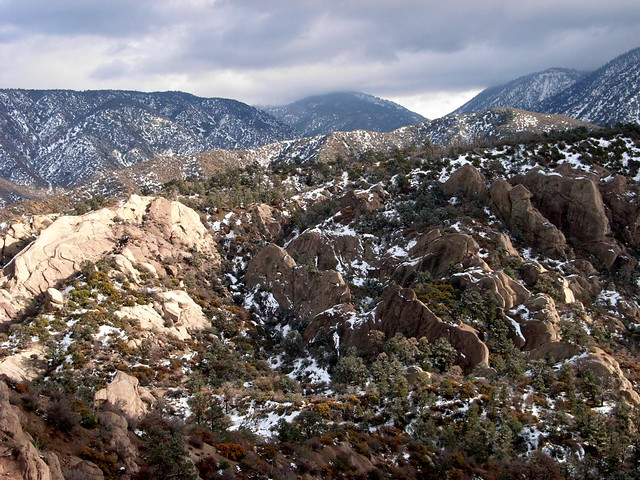 There is an easy, mile-long loop trail that leaves the excellent Nature Center and dives right into the Punchbowl Canyon, but my destination was the Devil’s Chair – a rocky promontory overlooking the eastern Punchbowl. So I took off from the southeastern corner of the parking lot and hitched onto the beginning of the Burkhart Trail.

Here, there was about an inch, maybe an inch-and-a-half of snow. The sound under my boots was soothing, and the cold air filling my lungs was better than any cup of coffee I’ve ever had. 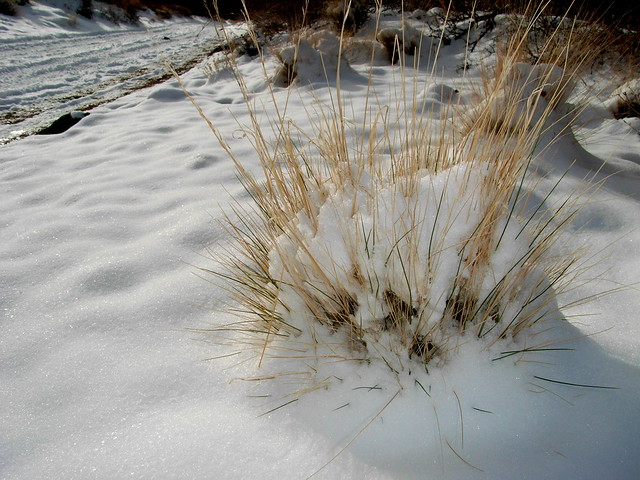 The first mile or so of this trail is where you’ll be doing most of your ascent, along a relentless but gently graded fire road. You will have a few opportunities to peer over the edge of the Punchbowl, as well as look out over the immense flatness of the Antelope Valley to your north. After that first mile, you’ll reach a clearly marked trail junction, where the paths split to Burkhart Saddle and Buckhorn Camp or the Devil’s Chair and South Fork Camp. Continue down the path toward the Chair … and try not to think about how this is almost your peak elevation for this trip. 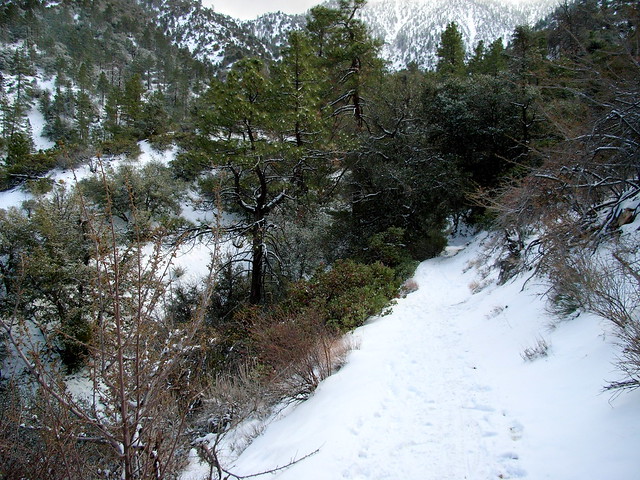 Try instead, like I did, to focus on the transitional flora as you skim the border between high desert and subalpine forest. Or just enjoy the great single-track trail. Or, if you’re lucky enough to be walking in the dead of December after a recent snowstorm, think about how great it is that this is just a short drive away from downtown L.A. 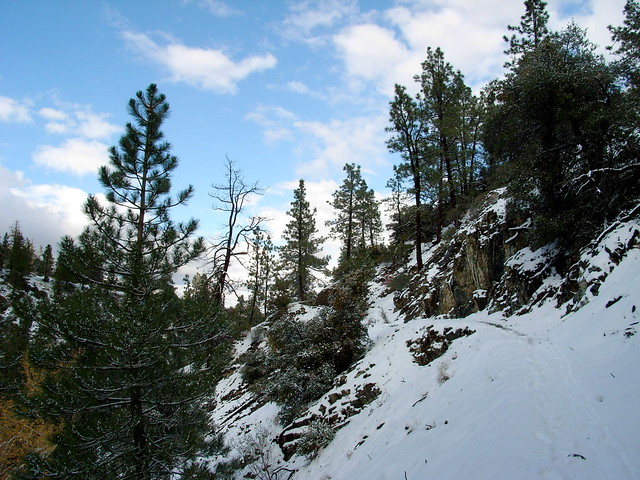 I also took ample opportunities to look off my left shoulder at the Punchbowl’s plates as I stomped through the snow. It’s always nice to see new this place from different angles.

As the trail continued, it seemed like every time I had a stretch of elevation gain, it’d be immediately countered by a quick decline … which makes sense, as the trail was basically hugging the lower north face of the mountains as it crawled eastward. The scenery and fresh air were great, but I’m not sure how much of that just had to do with the fresh snowfall … 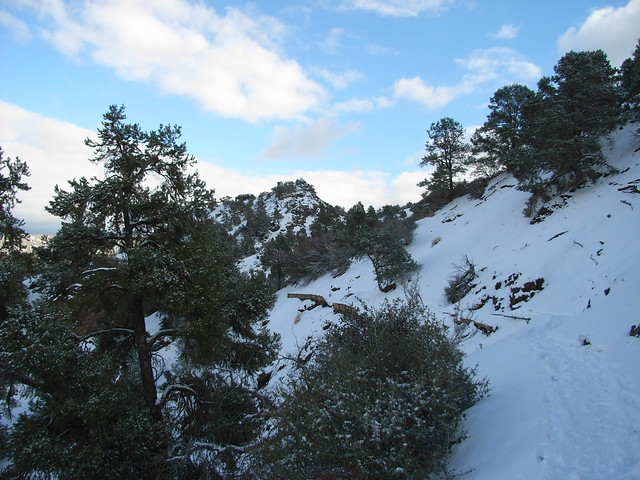 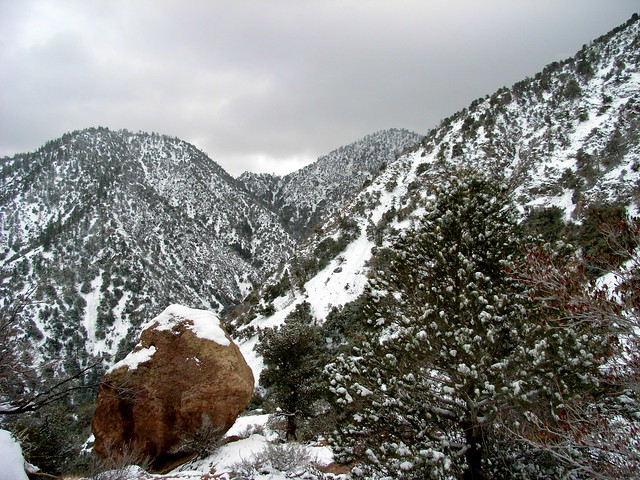 After reaching and passing several mini-summits that seem like they’re the end of the trail, the pathway finally peaks out just in front of Holcomb Canyon. From here, you won’t be able to see the Devil’s Chair itself, but you will get broad, sweeping views of Holcomb behind you and the Punchbowl in front of you. You’ll also see a beautiful, gnarled old tree husk that a certain Northern California hiker/blogger would definitely stop to take a snapshot of. 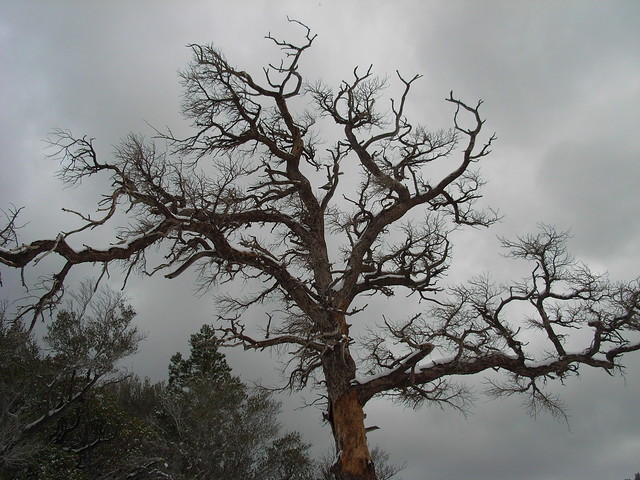 Here, the trail makes a quick dive in elevation down a series of short, steep switchbacks. When the High Desert National Recreation Trail keeps heading on to the South Fork Camp, you’ll hug the cliff-side and see – for the first time – the Devil’s Chair. It’s a tiny rock promontory jutting deep into the Canyon. And you’re headed there. 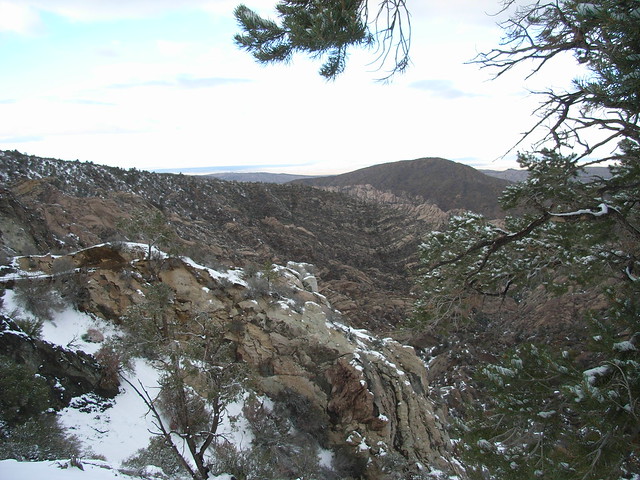 Say what you will about adding artificial safety devices to the wilderness, but this whole area is fenced in and I’m glad. The narrow, winding approach to the Chair itself would have been unhikeable in these conditions without them. Also, I’m guessing, there probably wouldn’t be an established trail here if it weren’t for the fence. 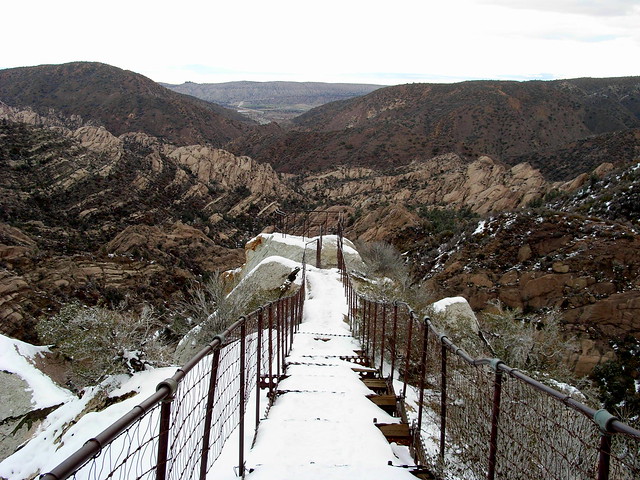 The Chair itself is an incredible place to soak in the views of the eastern Punchbowl formation. There’s a whole lot of geology at work here.

Wherever you are on this trail, make sure you stop every once in a while to take a look down at the Punchbowl formation. You never know when you’re going to get those angles just right. 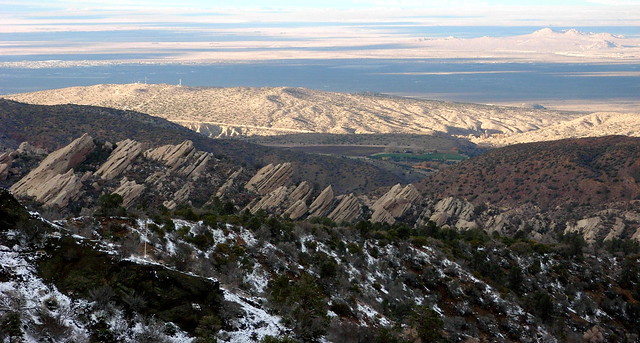 On the way back down to the trailhead, I turned back to see a bright light shining out of Holcomb Canyon. While all around me was covered in slate gray snow clouds, a part had formed just south of the Canyon, allowing the rays of the setting sun to shine only in that location. The overall effect was incredible, and I had to stop and just watch for a few minutes. 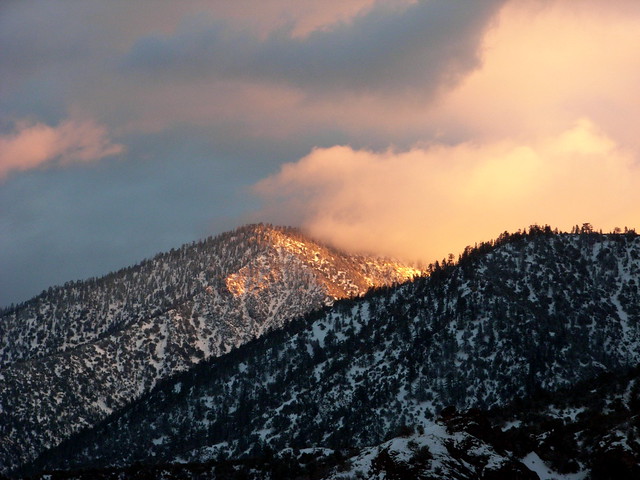 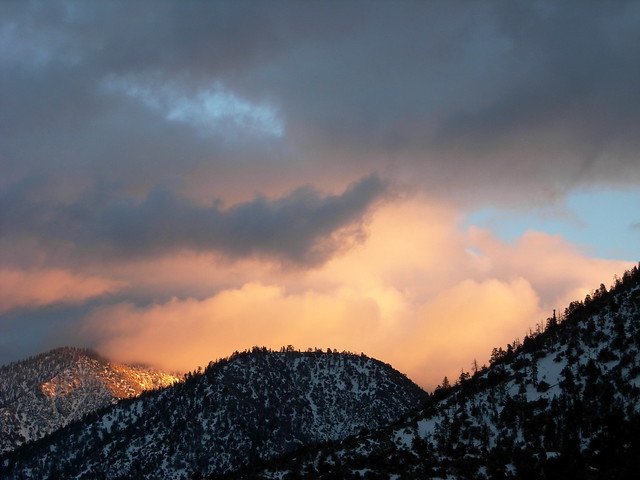 And then, as I returned to the trailhead, I was treated to another beautiful sunset. I’ll have to say, the decreased daylight hours are a drag, but if I keep getting these brilliant sunsets at the ends of my hikes, I think I’m sold on winter hiking. 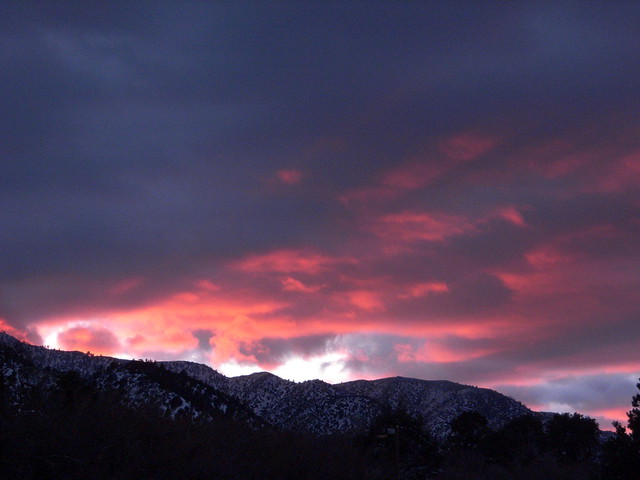 Please note – the Devil’s Punchbowl Natural Area was badly damaged in the 2020 Bobcat Fire. Conditions are likely to differ from their description here.

The opening section of the trail is on fire-road, but the Punchbowl Trail / High Desert National Recreation Trail is a great, well-maintained single track trail. Junctions are well marked. The area near the Devil's Chair itself may inspire a bit of vertigo in some hikers.

Take Interstate 5 North to California 14N toward Palmdale. After about 30 miles, take exit 30 to the Pearblossom Highway. Continue on this road until 87th Street East, where you'll take a right. Take a left onto Fort Tejon, a right onto Longview, and a left on Tumbleweed. Parking at the Punchbowl is free, but the park closes at sunset.

I've noted in the write-up -- and don't worry, it's not destroyed -- just affected by a wildfire. It may take a while, but these trails will be open again!

This area was destroyed in the 2020 Bobcat fire

Is this Leon Baldwin, my former next door neighbor in Ferguson, MO?

Just a wonderful hike for a day trip. The trial is nicely maintained and clear.

Oh wait, just realizing this is another snowy day from an earlier year!

I think we were there the same day!

[...] Trail, which shows off some of the area’s earthquake geology. If you’ve been to the Devil’s Punchbowl, it will look fairly familiar – strangely tilted slabs of rock, some at angles of up to 50 [...]

Leave a Reply to Let's Do Something Awesome » Post Topic » Getting Out of LA: Devil’s Punchbowl Cancel reply

Hiked it on March 21st. No snow on the ground anymore (although there is lots on the mountains above). It's starting to draw crowds so get there early.

Lots of snow on the ground, but not dangerous. I did notice a shovel and a wheel barrel near the last stetch to the Devil's Chair. Clearly someone shoveled a path to make it safe.

It was a pretty hike. The contrast between the snow-covered north-facing hills and the dry, dry, DRY Antelope Valley was very interesting.