A short and easy but breathtaking stroll through the Antelope Valley California Poppy Reserve – a 1800 acre reserve of prime California poppy real estate. Accessible for just about everyone, this small unit of the State Park system is a must-see during bloom season, when the low hills become absolutely covered in carpets of orange.

After seeing some pictures and reading about some other hikers’ bloom-viewing experiences in the Antelope Valley, I decided to finally make the small trek up north to see what all the fuss was about – and I was not disappointed.

I decided to take the slightly-longer drive in, along the 138 E. That rural road is known for its own share of wildflower blooms, and the impressive roadside poppy displays were a great way to warm up my eyes for all the orange they were about to see. If you’re headed to the Poppy Reserve during bloom season, try to take the extra time to drive along this road – it’s worth the side trip. 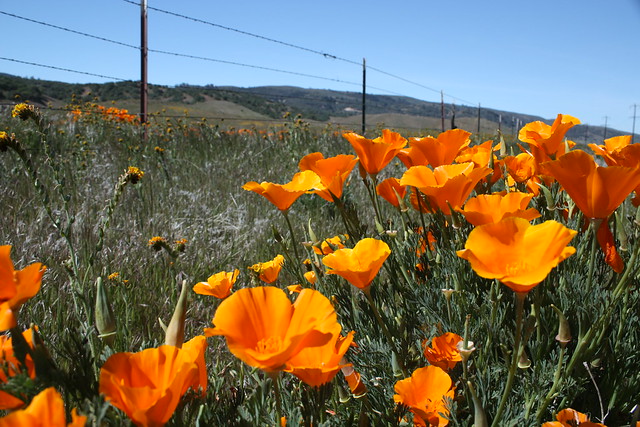 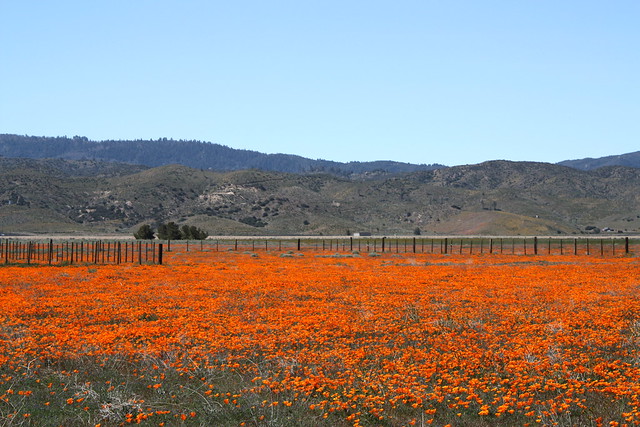 The actual Poppy Reserve itself was pretty busy when I went – due both to the fact that the poppies were in full bloom and also probably to the fact that nearby Lancaster was holding its annual California Poppy Festival. But after a short wait to get into the parking lot, I headed onto the reserve’s 7-mile trail system. 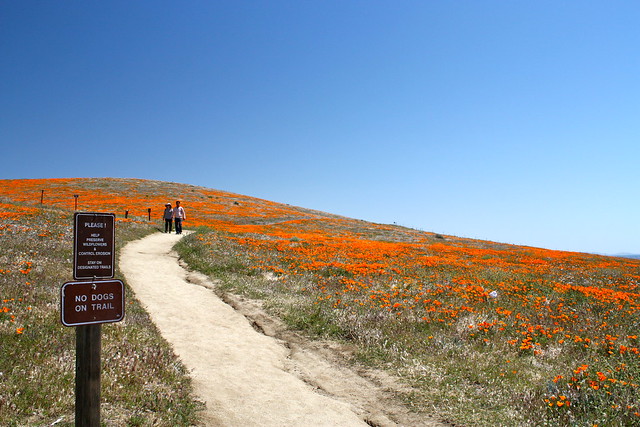 When you pay to park, the rangers will give you a small brochure with some helpful information about the different plants and animals you’ll see on the trail, as well as a small trail map. The system ranges from easy to moderately-easy inclines, and while the paths are very easy to follow, some of the trails are not “named,” so it can be a little disorienting to try to figure out where in the tangled loop of criss-crossing trails you actually are. Of course, you could just spend your time wandering around and not worry too much about getting lost – everything loops back around eventually. 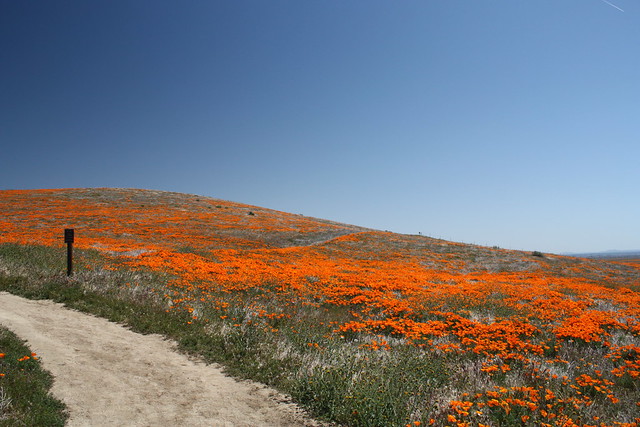 There are a few viewpoints marked on the map, often on the tops of low buttes or hills. From this vantage point, the sheer number of poppies really comes into full focus: 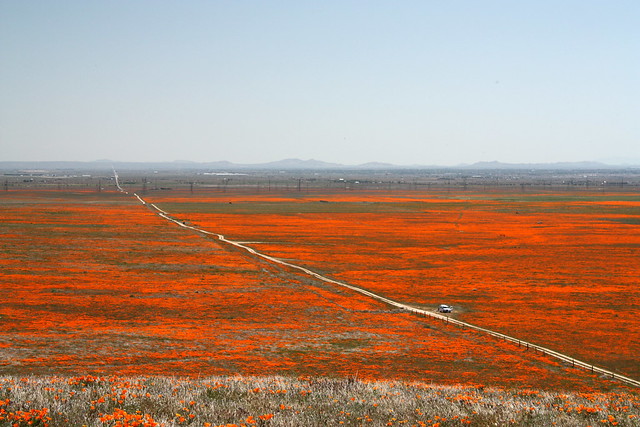 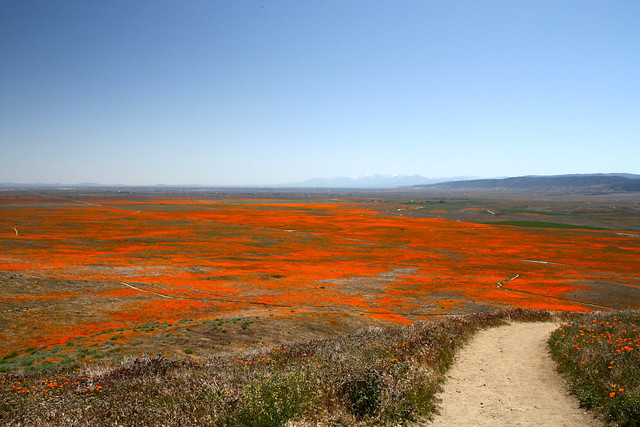 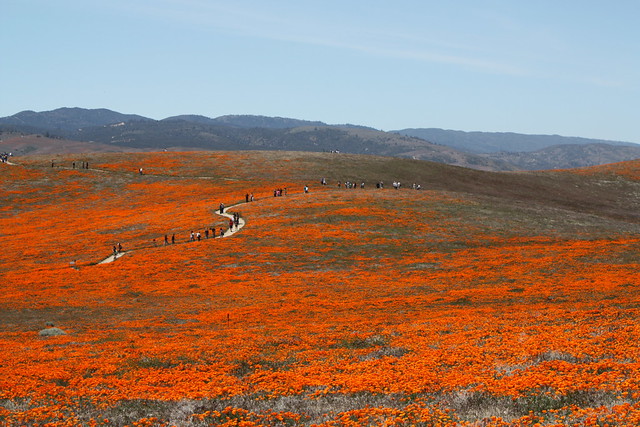 … as well as the crowded parking lot during the peak bloom: 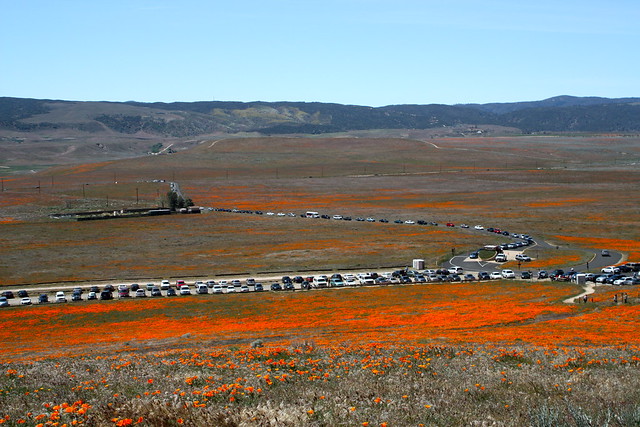 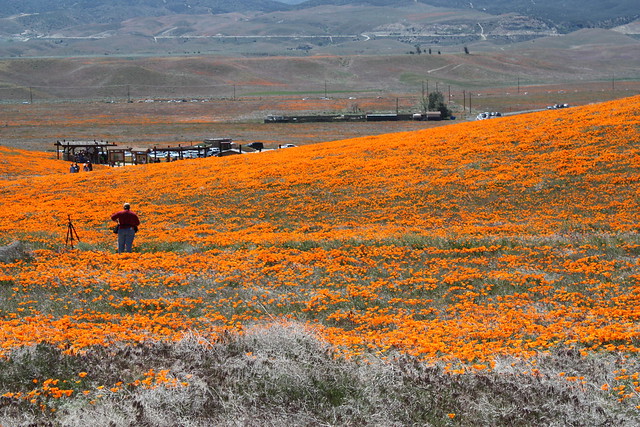 I went up to the closest vista point to the parking lot, where I spotted a few patches of non-poppies in the north end of the reserve. So, after the short descent, I avoided the crowds near the visitors’ center and headed north on the Loop Trail.

This area was much less crowded than the areas closer to the parking lot, but still had some pretty impressive poppy blooms on display, as well as a good mix of other colors: 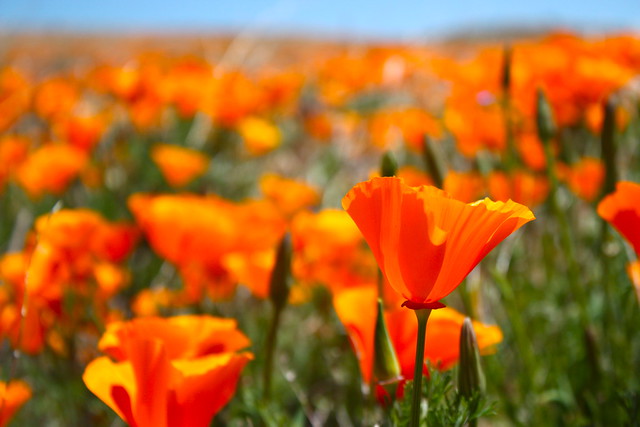 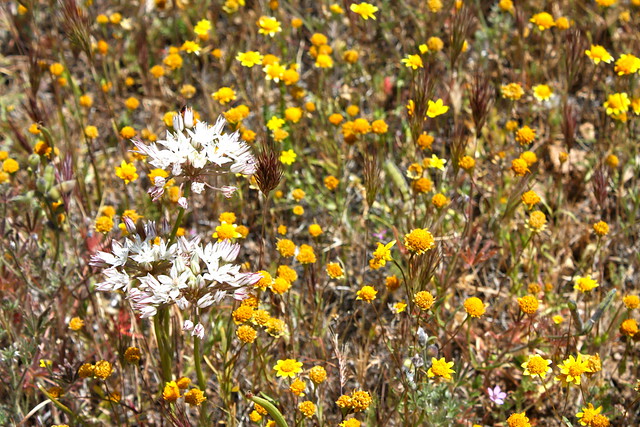 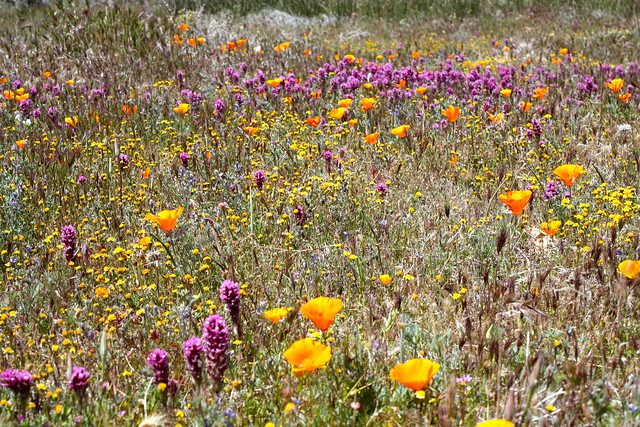 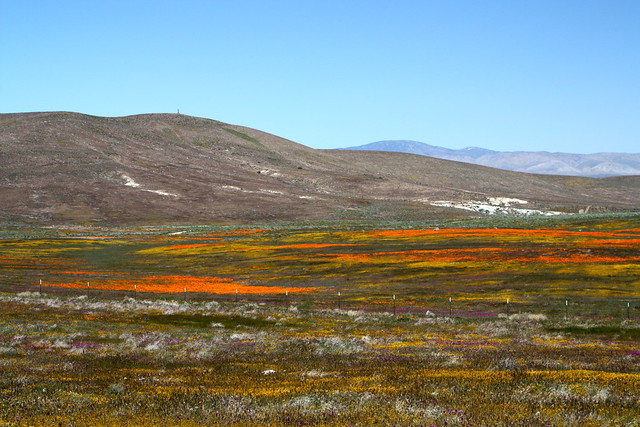 After looping around the north end of the park, I was greeted with the crowds on the South Loop – who had very good reason to be there. The south-facing slopes of these hills were almost a solid carpet of orange, and were attracting their fair share of admirers and photographers. 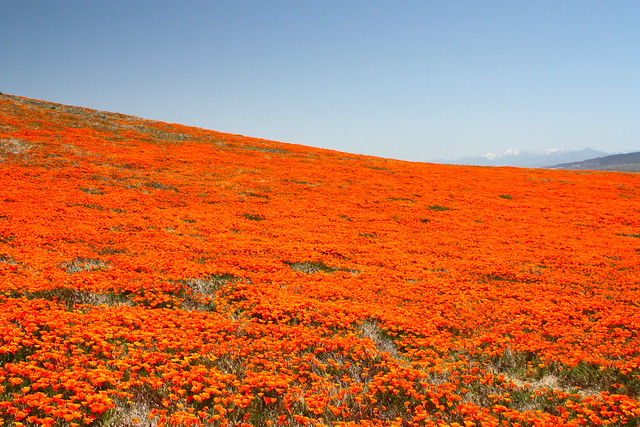 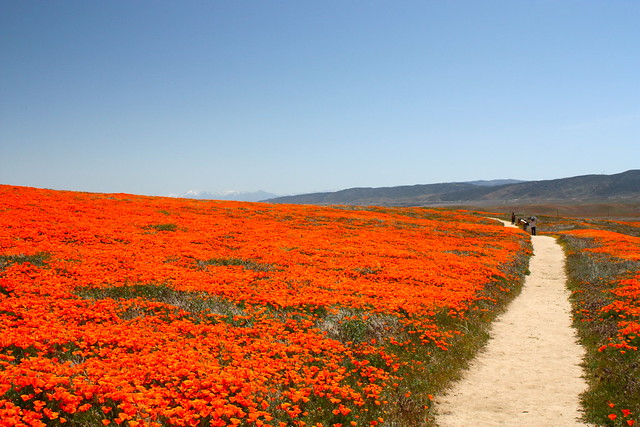 *** note: although this hike is very easy, be sure to bring sunscreen and water with you on this hike. Even in spring, temperatures can get pretty hot in this area of California, and there is absolutely NO shade on these trails outside of the Visitor’s Center.

For the best information on current blooms, be sure to check the Theodore Payne Foundation’s Wildflower Hotline before you head out (seasonally operational).

Excellent. This park has a very well maintained system of about 7 miles of trails, all of which are clearly marked and easy to find. The visitor center and a short paved path are accessible routes.

While there is no camping at the Poppy Reserve, there is a campground at nearby Saddleback Butte State Park. Saddleback also often has impressive blooms in the spring, and a well-timed trip can net you two beautiful hiking areas.

Take the 5 North to San Francisiquito Road. Follow this as it becomes Munz Ranch Road, then take a left onto Fairmont-Neenach Road and follow the signs to the Reserve. Alternatively, you can take the 5 north to CA-138 E and follow this road to the reserve - during the bloom season, you'll see a lot of roadside wildflowers, too! Parking fee inside the Reserve.

We were there on 3-21-29 and brought our dog. Once you get to the park they say no dogs and you have to have someone with the dog at all times as well as they can not be on the trail. Really bummed that we did not know about this rule!

We arrived around 9 am and it was windy and cold! So bring a fleece! Poppies were not blooming yet but by 1130, they were fully open! Parking lot got full and was closed off and a lot of people parked on the side of the road.
Beautiful and worth going!!!

Spring, if and when the flowers are blooming. Otherwise you're not gonna see much!

What is the best time to visit.

Wow, the pictures of the flowers are just stunning. The desert can hold such surprising beauty. This is certainly a hike that is worth the mention!

[...] home to one of the largest collections of flowers to be seen. During this time, you can visit the Antelope Valley California Poppy Reserve, where 1,700 acres of poppy fields can be viewed. Lined with trails, you can walk through the vast [...]

I've been out to see the poppies, but never been on that particular trail. The flowers are in full bloom and are really blanketing the land there. I'd love to come out and see it next year.

Are the poppies still blooming in full effect? Anyone been in the last few days?