There aren’t too many places where you can find a trail that will kick your butt with elevation gain, bring you to the ruins of a 500-year-old religious complex, and drop you off right next to a market filled with unbelievably delicious, cheap, hand-made food but the village of Tepoztlán in the state of Morelos is such a place. Easily reachable by car, bus, or taxi, the sleepy village is popular with Mexican tourists and can get packed on the weekends – especially in peak season.

The trail starts at the end of Del Tepozteco, about five blocks north of the market. Walk up the cobblestone street until it ends at a fork, and follow the signs and stay right to continue toward the trail. Like many National Parks in other parts of the world, the entrance to this one is lined with merchants and food vendors. On the weekends, expect this area to be crowded – but when we hiked in the late morning most of the stalls were closed or still opening. 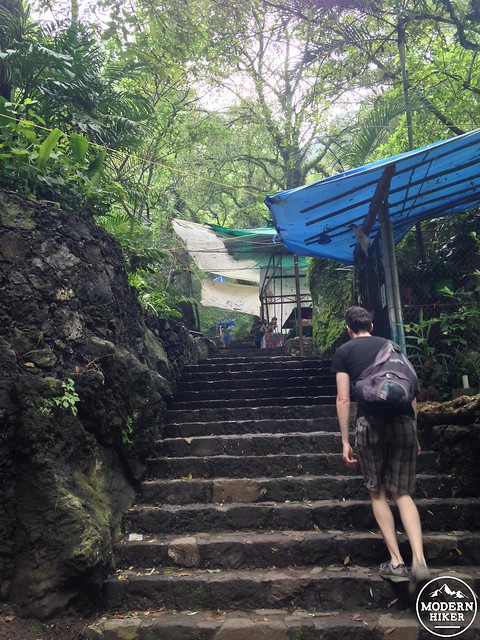 The relatively level stone staircase near the cobblestone street winds its way through some vendors, hostels, and holistic creekside spas before it enters a landscape that could be accurately described as a rainforest. The mountain slopes here get 1.2 meters of rain a year and the landscape is a constant reminder of that. Be sure you bring a waterproof layer with you and wear shoes with good grip – chances are it’s going to be slippery somewhere. 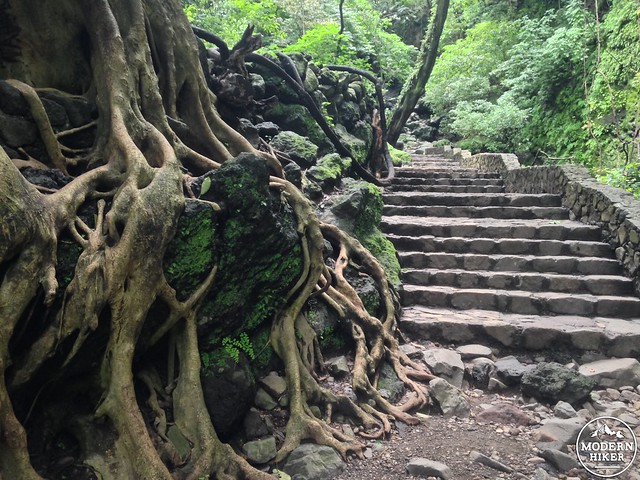 Eventually, the level staircase dissolves and becomes a haphazard, sometimes-nearly-vertical stone walkway. The trail is short but steep – and you’ll probably have to stop a few times to catch your breath on the way up. 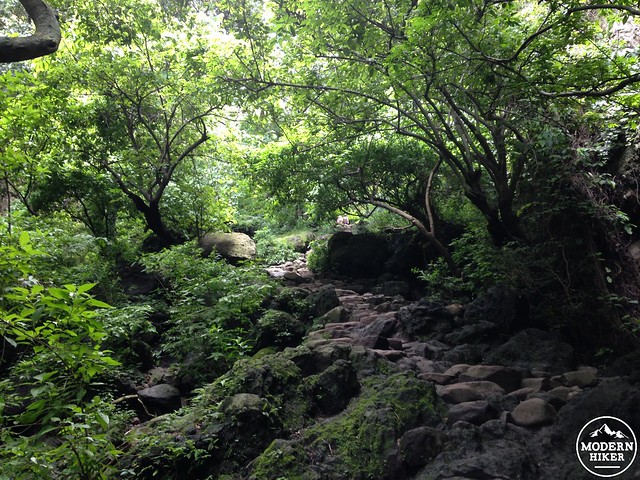 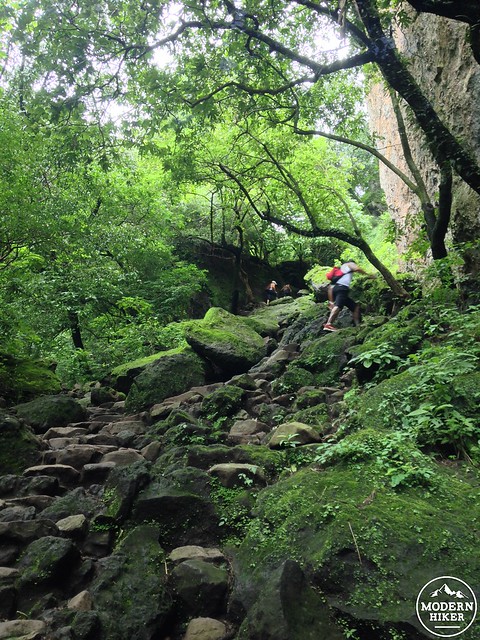 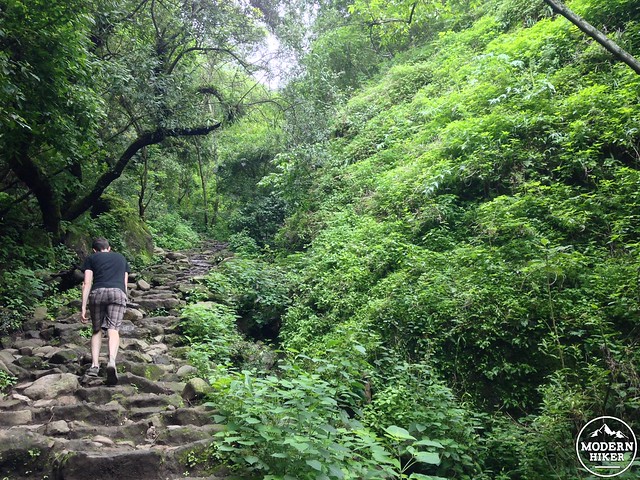 At about the half-mile mark, the trail squeezes its way through a boulder and into a small canyon on the mountain’s side. From here, you’ll be able to get a quick peek at some of the distant mountains – as well as the nearby super-dense foliage. 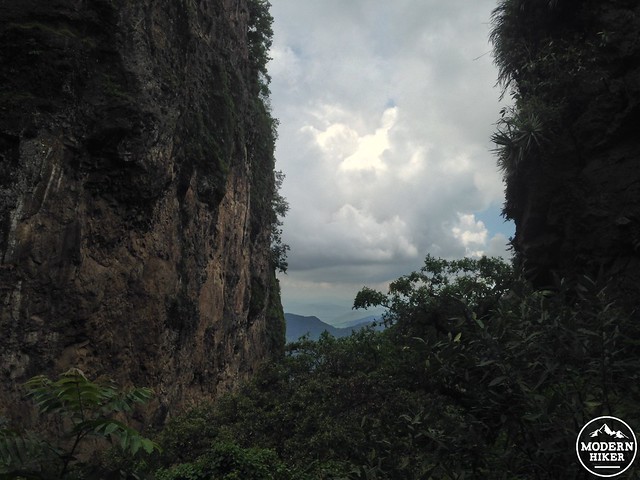 After you hop across a small stream, the trail winds up again to a very narrow canyon – with a mildly disconcerting metal gate and structure wedged inside: 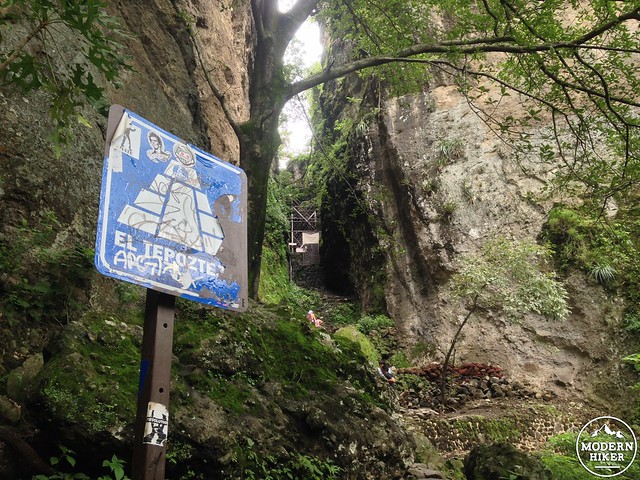 Once you approach, you’ll see it’s just an entry gate to the pyramid’s archeological site and a very steep metal staircase for the final ascent to the top of the mountain.

Because the canyon is so narrow, there are separate staircases for ascending and descending – but you should still take this route slowly and carefully, especially if the stairs are wet. Once you’ve topped the metal platform, there is still a series of steep and narrow switchbacks before you’re done with the climb – but you’re almost there! 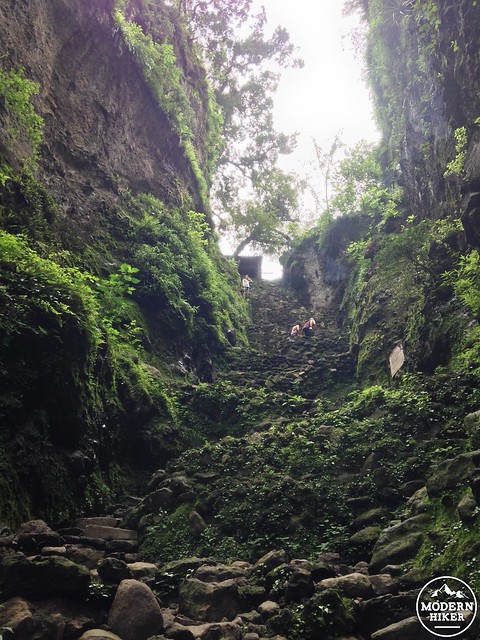 At the top of the switchbacks, there will be a place to pay your entry fee as well as a few signs about the area’s history in several different languages. Immediately to your right will be the ruins of the Tepozteco Pyramid.

The site was occupied by the Xochimilcas before being conquered and vassalized by the Aztec Triple Alliance in 1438. It is still unknown when the temple itself was built – estimates range from the 1400s to the 1500s – but it was used as a shrine to honor the god Tepoztecatl – a god of drunkenness and fertility associated with the pulque drink made from agave plants. Although the shrine itself is small, it was important enough to attract religious pilgrims from as far away as Guatemala … although I suppose if you’re the god of drunkenness and fertility you probably don’t need help with your party invitations.

A shrine and statue of the god stood on top of the pyramid until the 16th century, when a Dominican friar destroyed them.

Today, you can pretty much climb all over the site – there are only a few areas of old residences that are off-limits to visitors. Enjoy getting such a tactile experience with ancient history … and make sure to soak in some of those killer valley views, too. 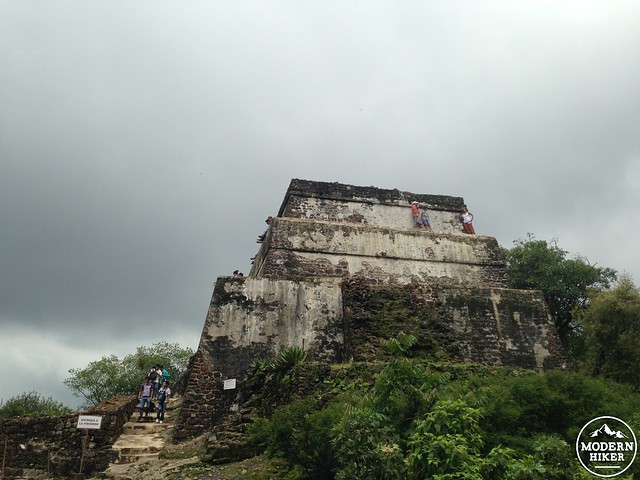 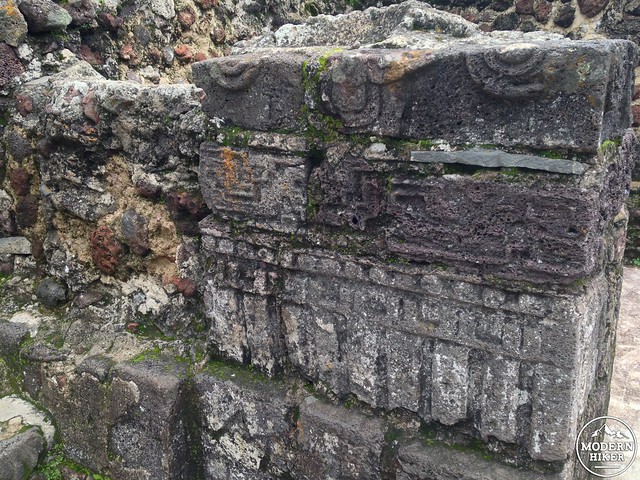 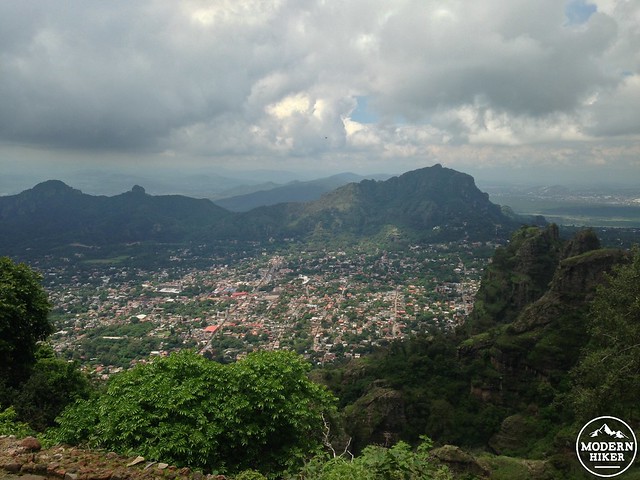 Also, you’ll want to be on the lookout for these little guys: 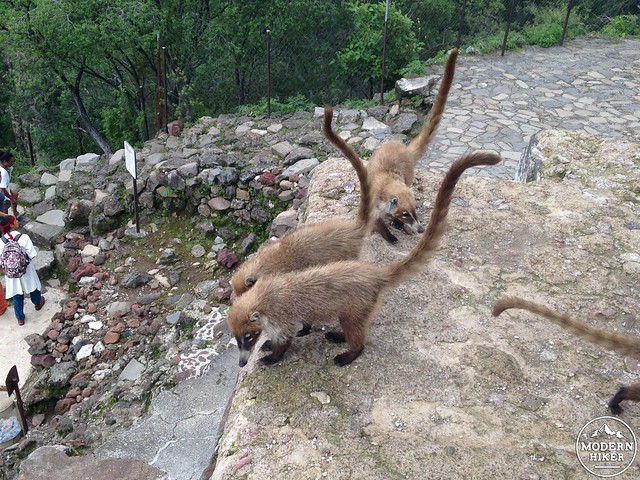 Coati are these very cute little combinations of raccoons and monkeys – and because at this site they’re acclimated to human contact, they’ll have no qualms in getting up in your business if you’ve got some food on you. They were skittish enough to run away if someone yelled at them, but we were warned they can get a little bitey if you get too close.

Descend back down the trail the same way you came up. When you get back to the village, be sure to stop by the market for some killer food and wander through the circa-1555 Ex-Convent of the Nativity, which is also a UNESCO World Heritage Site. 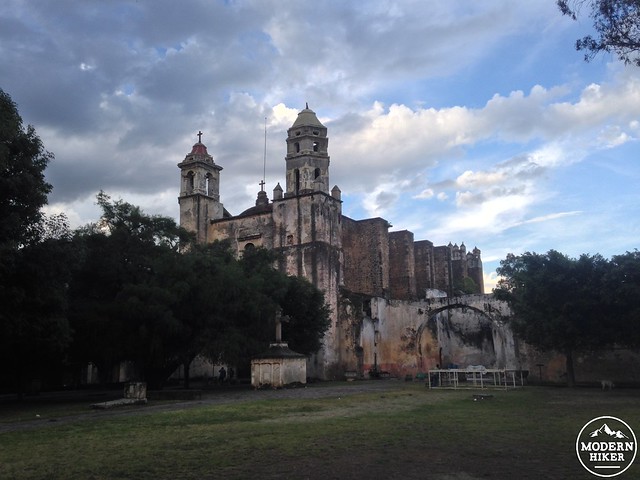 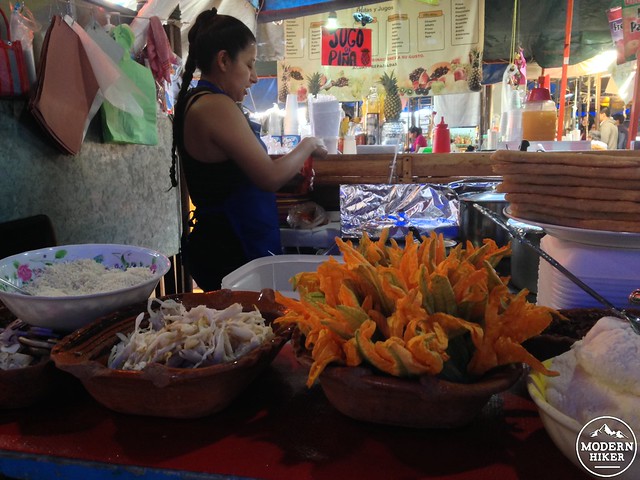 For travelers without cars: México has an excellent public transit system as well as numerous affordable private bus options including Pullman de Morelos and Estrella de Oro . There are many public and private lines that will take you from D.F. to the Cuernavaca bus depot, and you can purchase a private taxi ride to Tepoztlán from inside the depot. Unlike in the States, in México you negotiate the fee for a cab before you get in – and at bus stations you often pay the station and hand the driver a ticket.

Good. There is a stone staircase and path from the bottom of the mountain to the top of the pyramid, although it is very uneven and often wet - so tread carefully.

The village of Tepoztlán lies in the State of Morelos, 82km south of México City. There are many public and private busses running from the Distrito Federal to nearby Cuernavaca, where it is easy to catch a cheap private taxi to the village. The trailhead begins at the end of Ave. Del Tepozteco, a short walk north from the village market. At the time of writing, the trail itself is free to hike but there is a 42 peso fee charged near the pyramid (about $3.20 U.S.). Also transit accessible.

Did this hike on Sunday, March 2nd and had no idea what I was in for.
Am in my mid seventies but made it to the top of the pyramid of which the stairs are another challenge.
Was told that those stairs are so narrow because then a person has to go up sideways, not being able to face the Gods which was disrespectful.
Do not go on a Sunday; terribly crowded!

Just did this hike and loved it. Glad we went early in the morning so there were just a few of us on the trail. Much of the trail is original...meaning it was built when the temple was.

Wow! Didn't know you had hikes in Mexico, awesome! If you get over to Guatemala... *Semuc Champey* :-)

I guide backpackers to 2 wilderness hot springs in the depths of Copper Canyon. The first day we descend 4300 vertical feet in 9 miles: http://evanravitz.com/paradise-trips/

I bicycled the length of Mexico, climbed the highest volcano Orizaba and built a log raft and floated eight days down the biggest river, the Ucimacinta. I scoped out all the hot springs I could. Ask me anything

Thanks, Casey, for your wonderful step by step description. I'm writing a novel set in the Cuernavaca region where I spent so many happy years as a child. Your description of the ascent of the Tepozteco mountain and pyramid brought both vividly to mind. Many thanks!

Hi, I'd totally love to hear some more about your experience in Mexico. Thank you!

I agree that the hike is absolutely 100% worth the struggle to get to the top ... and it makes it easy to justify all the delicious food you eat at the mercado afterward :) Hoping to spend some more time hiking in Mexico soon!

This is THE best description of this hike that I have found on the web. It's a tough hike, but "vale la pena" - the view from the top and the feeling of achievement when you finish make the effort worthwhile!

Thanks, Josh! I've got a few more from Mexico ... and if people dig these travel posts I can definitely add the ol' backlog from Jordan :)