The trail in Solstice Canyon is a picturesque, shaded, classic Santa Monica Mountains canyon hike on a popular, well-maintained trail with opportunities for less-traveled spurs. Highlights include a small waterfall, the site of the oldest stone building in Malibu, and the ruins of a burned-down mansion.

Just a quick turn off the Pacific Coast Highway north of Malibu, the entrance to Solstice is just a few hundred feet away from the sometimes crowded beaches, but it feels a world away. A short road winds its way through a few hills and over a small stream to a moderately-sized parking lot with plenty of picnic areas, an amphitheater, and some bathrooms. This is a popular trail, and there is an overflow lot closer to the PCH. If you’ve got extra time (or don’t have a car), this is one of the most easily accessible hikes from Metro – the bus stop for Metro Bus 534 is just a few hundred feet south of park entrance – and will save you the hassle of fighting for a parking spot.

At the north end of the parking lot you are presented with your trail options – you can either take an easy stroll down the paved Solstice Canyon Trail heading straight in, or you can climb a staircase and dirt path that leads to the more rugged, more exposed, more secluded Rising Sun Trail via the TWR Trail (named for the company that performed early satellite research for the space program here from 1961 to 1973). If you’re up for a bit of a workout, head up the stairs. 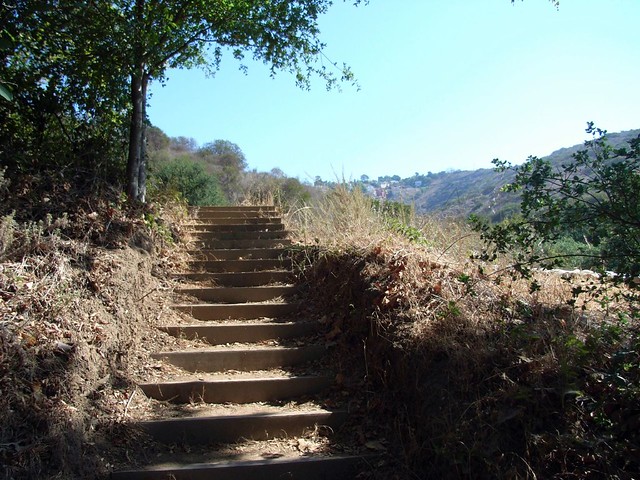 Just a few hundred feet up the trail, and you’ll start to get some great views of the coast … and a little bit of the parking lot you just crawled out of. Not the most awe-inspiring vistas, but it’s a pleasant view of the Pacific. You’ll cross a paved road in 0.2 miles, then turn right onto the Rising Sun Trail about 0.1 mile past the road. 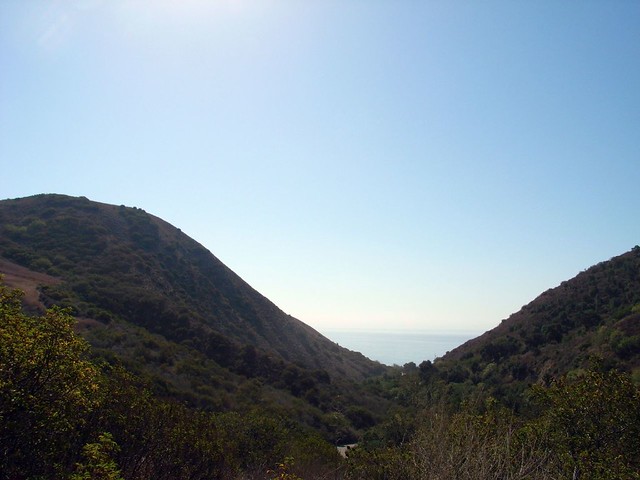 The Rising Sun Trail ascends the eastern edge of Solstice Canyon along a well-defined, wide trail. There are long stretches of climbing but nothing steep enough to get worried about. There is, however, very little shade on this stretch of the trail — so if it’s hot out, be prepared to sweat. 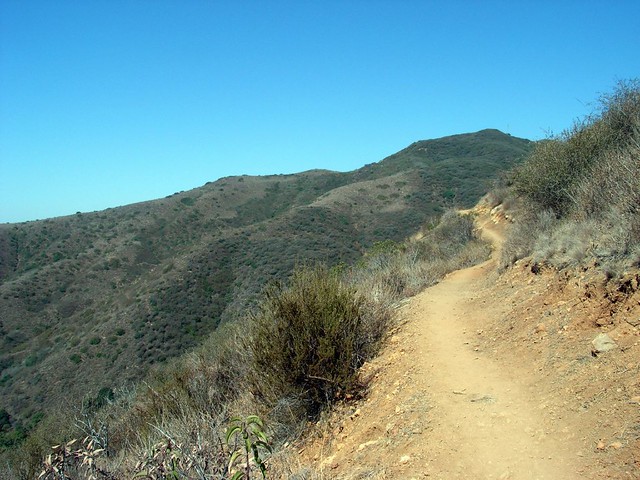 As you ascend (especially in the spring or after a rain) be sure to pay attention to the fragrant chaparral and California bay trees lining the trail as you ascend.

Eventually, you’ll reach the crest and be able to peer down into Solstice Canyon again. When I hiked this, we had an extremely parched year so far in Southern California, and most of the brush was pale and dried out. However, there is a small stream that constantly runs through the canyon and a brilliant band of green hugging both banks. Because everything else was so thirsty, the watered areas really stood out in the scenery. 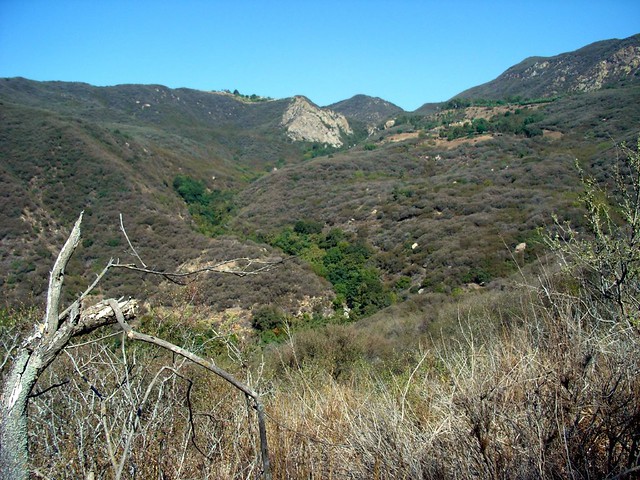 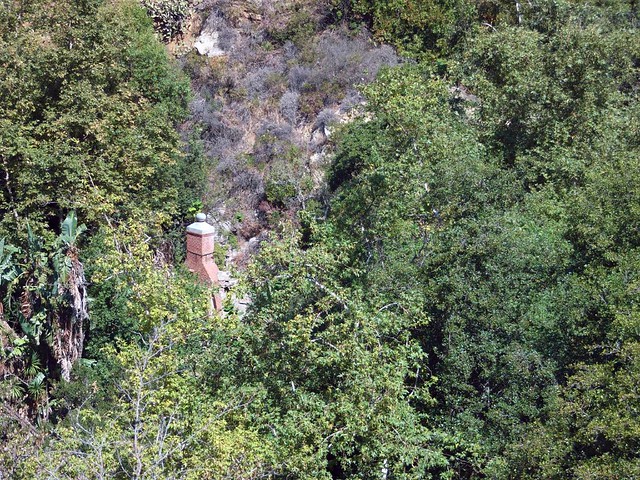 You’ll reach the stream after a quick descent — and it will be difficult to resist dunking your head in to cool off. But there’s more exploring to be had — if you stay on the east bank of the stream and climb up a few ruined steps, you’ll reach a the beautiful ruins of a statuary. To the south, it’s empty, but to the north, a Virgin Mary statue remains, complete with pinecone offering dish. It’s quite a peaceful spot for a short rest. 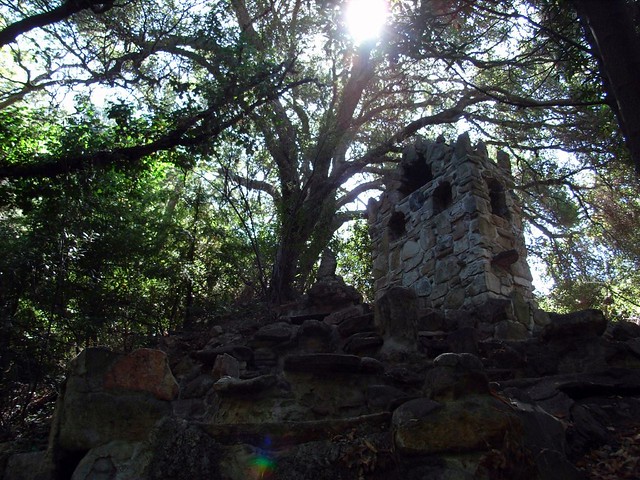 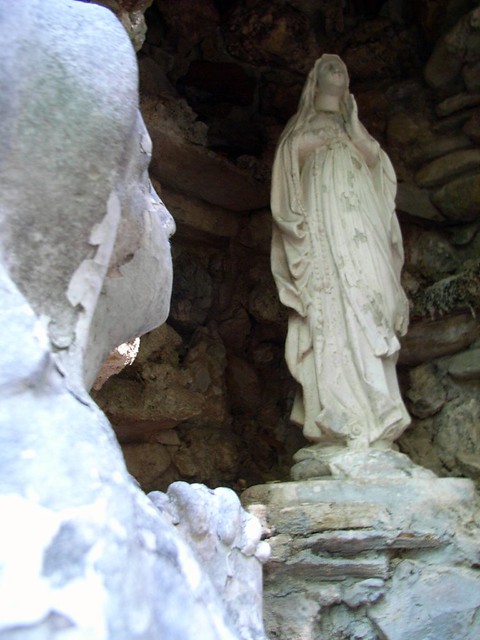 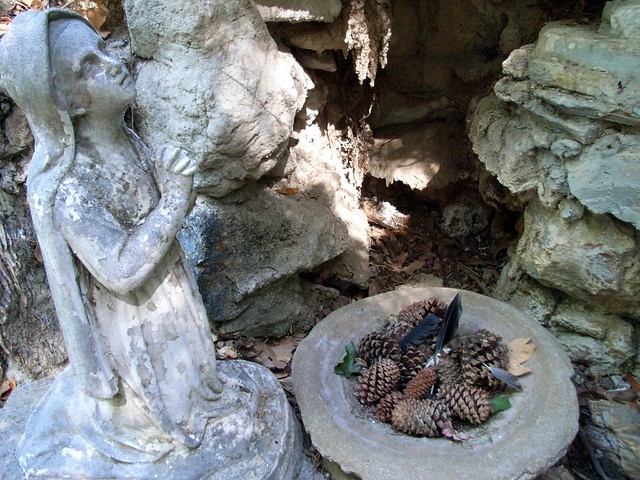 Many of these statues are no longer in the canyon, sadly

The Tropical Terrace house was built in 1952 by the renowned African-American architect Paul Revere Williams, who more than left his mark on Southern California. He designed more than 2,000 homes and many more public buildings, including homes for Frank Sinatra, Lucille Ball, and Barbara Stanwyck, as well as the Los Angeles County Courthouse, the Hollywood YMCA, the Arrowhead Springs Hotel in San Bernardino, and a redesign and remodel of the Beverly Hills Hotel. He assisted in the design of the iconic Theme Building at Los Angeles International Airport and the Shrine Auditorium. Hikers in the Eastern Sierra can also visit a cabin he built for “Man of a Thousand Faces” Lon Chaney on the North Fork of Big Pine Creek.

After getting your share of meditation your attentions will most likely turn toward the sound of rushing water coming from your immediate north. Just around the corner from the house is a small, multi-tiered waterfall with plenty of boulders to scramble around on. 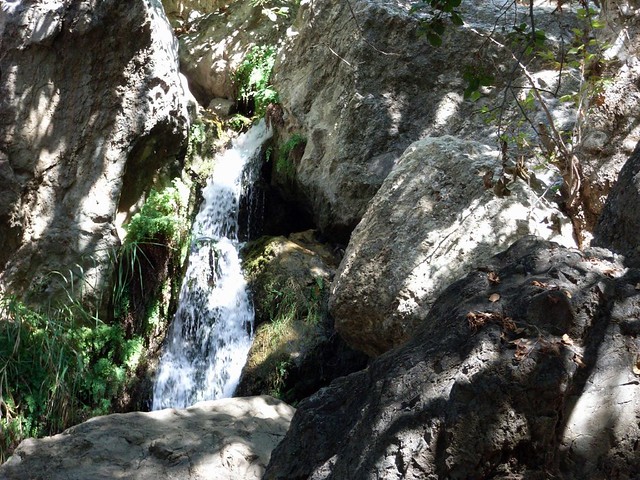 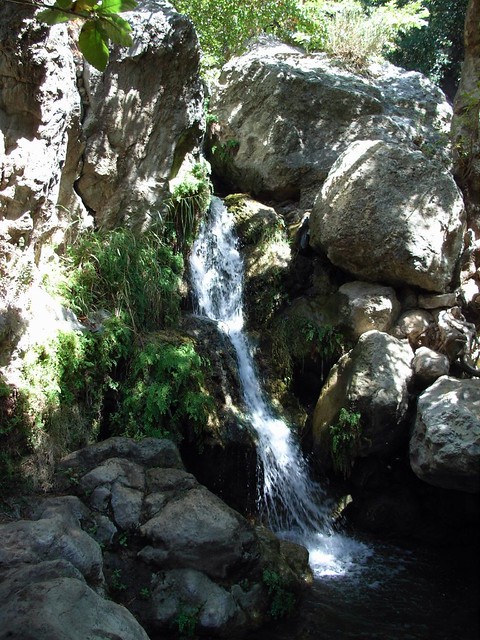 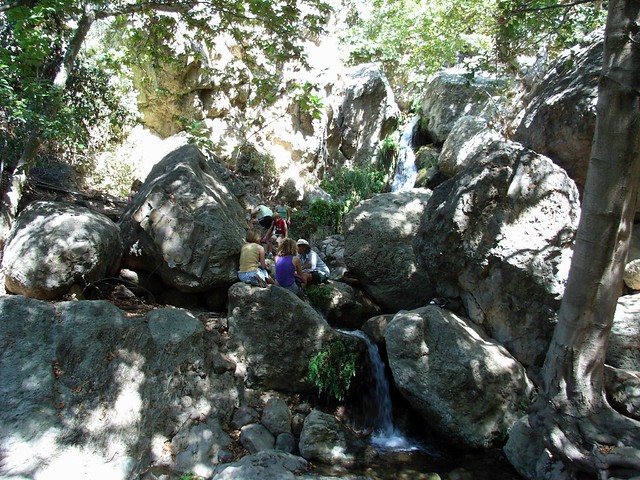 Crowded or not, this is one of the nicest easily-accessible waterfalls. It’s covered in shade, has a few shallow pools for foot-soaking, and is generally less crowded than the San Gabriels’ Switzer Falls. It’s also fantastic relief after the sauna of the Rising Sun Trail.

After you’re done cooling off, you can scramble up above the waterfall, or backtrack a bit and explore the ruins of the Tropical Terrace House. Despite burning down in 1982, the ruins are fairly well preserved. There are still several walls and chimneys standing, and you can still make out some of the stoves and furniture. 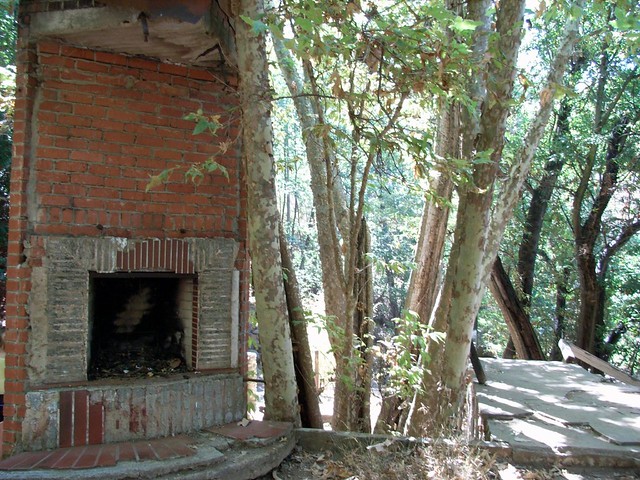 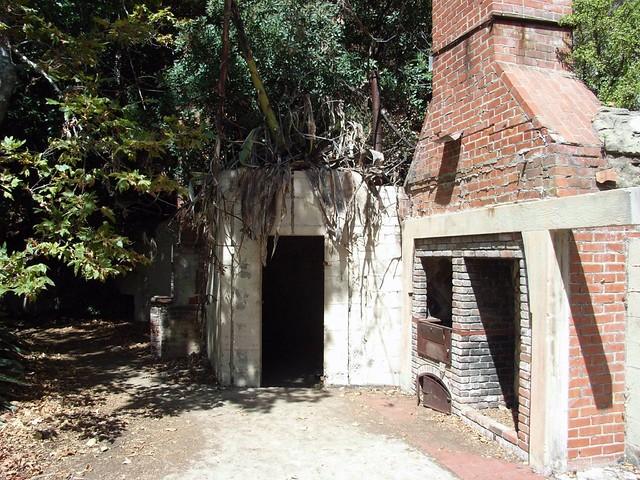 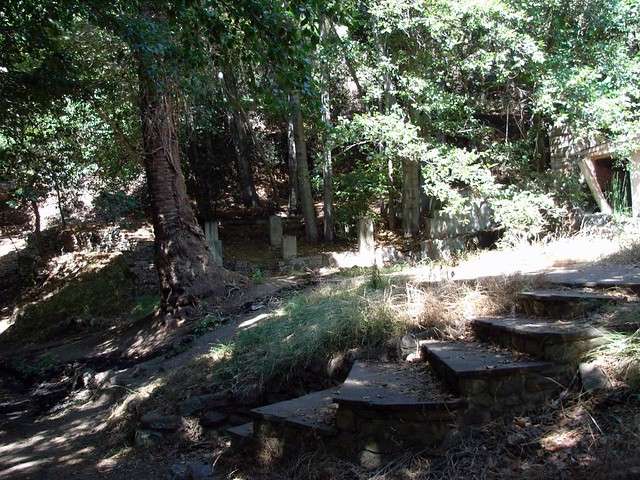 From here, you can just return to the trailhead via the paved path. But if you’re in the mood for more mileage, look for the junction with the Deer Valley Loop Trail just south of the ruins of the house. This trail is much less-traveled and isn’t in quite as good of a condition as the trails you’ve hiked on so far, but it’s a nice, more rugged option in the park that will help get you away from the crowds a bit. 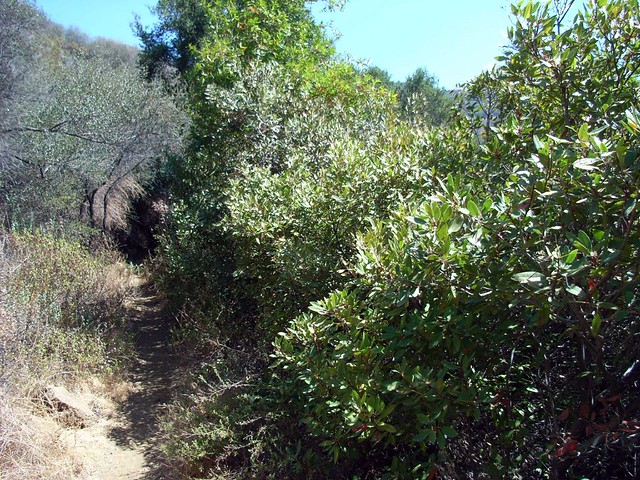 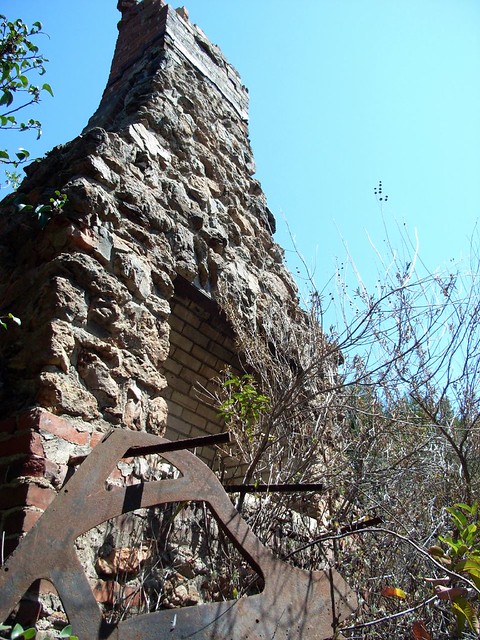 Eventually the trail meets up with the Deer Valley Loop, a 1.3 mile round trip that provides some great aerial views of the Pacific Ocean. Unfortunately, if you take the trail south first it sort of disintegrates in a meadow with no clear path. It was this, combined with the heat and my rapidly draining water supplies, that made me decide to call it a day and head back down to the main trail when I hiked … but I hear it’s nice up there.

Either way, you can get a nice perspective on the canyon from Sostomo. 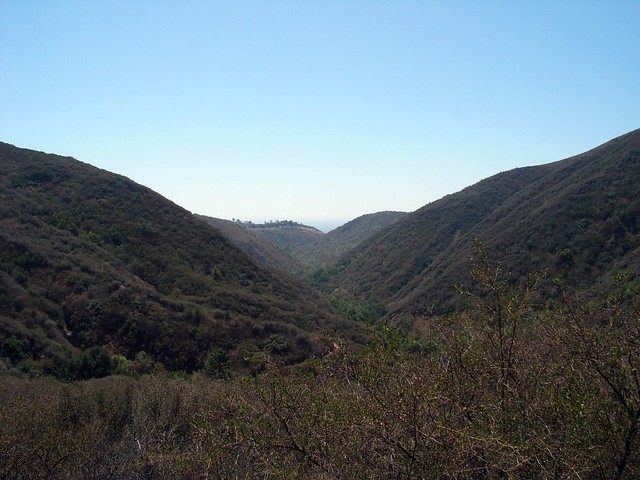 On your way back to the parking lot, the Solstice Canyon Trail switches from pavement to dirt road a few times, and hugs the banks of the Solstice Canyon Creek. This is a very easy stretch of trail with plenty of shade and ample opportunities to hop off the path and splash around in the water a bit — just watch out for poison oak. 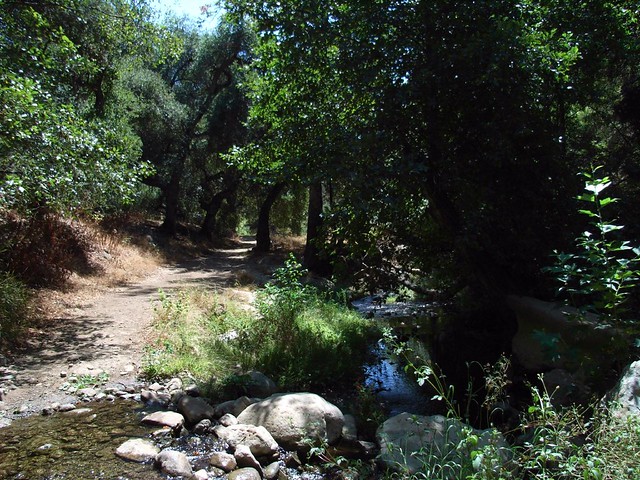 And if you’re down for a little bit of history on the way out, you’ll pass an enormous, gnarled tree on the west side of the trail, marked with a small plaque. This is the ‘Keller Family Oak,’ named for Matthew ‘Don Mateo’ Keller, an Irish immigrant who owned 13,300 acres of Malibu and Topanga after the Mexican-American War. His family’s old stone residence was across the river, and it was believed to be the oldest existing stone building in Malibu before being destroyed by the 2007 Corral Canyon Fire. 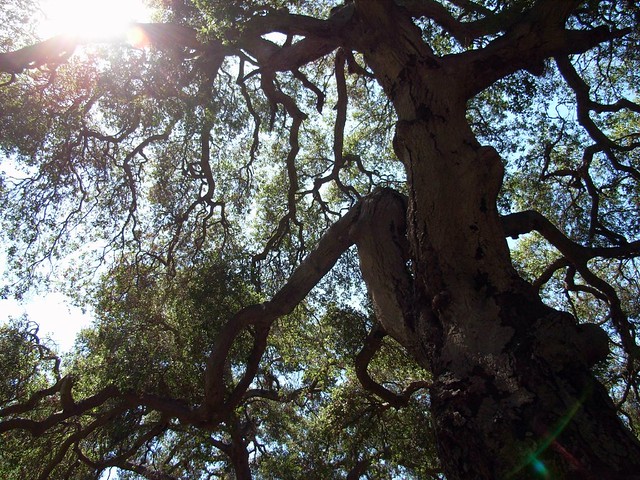 Excellent. The Solstice Canyon Trail is mostly paved road and fire road, while the other trails are single-track trails. The Rising Sun and Sosotmo Trails are less-traveled than the paved road, and offer more privacy. The Sosotmo Trail has a few overgrown areas, and the Deer Valley Loop Trail can be a bit tricky to follow in parts.

Take the Pacific Coast Highway north toward Malibu. Turn right onto Corral Canyon Road (just before a gas station), and you'll see the entrance to the park on your left. Transit accessible via Metro bus 534.

Just did this hike today. How amazing after all the rain we had. The waterfall was beautiful!
Thank you for all the detailed information, it made it very easy to get to :)

Did this hike last weekend. I went up the opposite way of Casey (clockwise) and skipped Sotsomo. The first part of the hike to the falls is extremely beautiful. Because of all the rain, there is tons of green and little scrambles to explore. The falls themselves are quite impressive---much more so than Eaton (A hike I love). After the falls...it's time ...to...climb! The climb isn't too tough...but you definitely ascend quickly. Once you reach the peak height ~1000 feet, you really have a fantastic view---and the trek down is so much fun. This is an "A" hike.

Just finished this hike today and indeed the Deer Valley Loop is good to go. Some of the trail is quite rocky but nothing serious. I went the opposite way from the guide and hit Deer Valley first and then went around. If it's a really hot day I'd avoid doing this or bring lots of water.

Waterfall is more of a water trickle at this point.

Great to hear the Deer Valley Loop is finished! I'll have to head back up there to check out the completed trail.

Those stairs you mentioned may be a bit further up from actual trailhead (and are probably just nicer looking with the sky behind them). When I head back I'll snap some shots from the trailhead just so people don't get confused. Thanks for the update!

Just a few comments. The picture you have of the steps at the trail head is incorrect. The steps are made of rock, and they are just to the right when you enter the gate at the beginning of the Solstice Trail.
Also the Deer Valley Loop is now complete. The trail runs all the way through.
Nice rewarding up and down hike.

Did the statue of Mary get its head cut off? I saw some photos but no info. What happened?

I'm confused about what you're asking. Can you provide more info?

After avoiding Solstice Canyon due to its popularity and high foot traffic, we finally decided to do the hike today afterall. It ended up being really nice, especially cause we did Rising Sun Trail to Sostomo to Deer Valley Loop and then taking the main paved trail back to the parking lot. Once we went past the Tropical Terrace House, we barely saw anyone on the Sostomo trail and the Deer Valley loop. We are glad we did the loop as it had some great views. We went North on the loop trail and didn't find any difficulty going the rest of the way. We ended up going for a total of about 6.65 miles. Great hike and having lunch in Malibu afterwards is always a plus!

Hiked the whole loop this weekend. Found the statues on the East side of the creek like you mentioned. The path is kinda hidden but it's just where the Rising Sun trail crosses the creek. Looks like someone vandalized the Mary statue since she was missing half her head, shame.