I had tried to do this trail earlier in the year but was turned back when the surprise Santa Ana Winds kept knocking my car doors shut and almost blew me off the trail … and now that I’ve done the whole thing, I’m very glad I turned around on that windy day and didn’t try to scramble to the summit – because there’s a good chance I would have been tossed off the firebreak and into the San Gabriel Wilderness.

So, on a much calmer and cloudier day, I returned with the hope of actually hitting the summit.

The trail begins near a very large parking area just before Coldbrook Camp. It’s tough to miss – there’s a large gate just north of the lot and an outhouse on the western side of the road. The trailhead is just to the north of this outhouse. 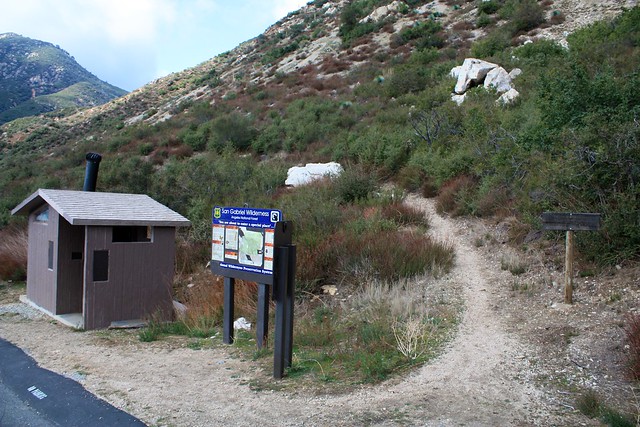 The trail begins by working its way back south alongside the road you just drove in on – but it gains in elevation fairly quickly. In fact, you’ll gain almost 600 feet in this first mile – never during any truly steep sections, but because the rest of the trail is more easily graded you might get a little winded near the trailhead. Thankfully you’ll have some nice views of the surrounding mountains to take your mind off of the incline. 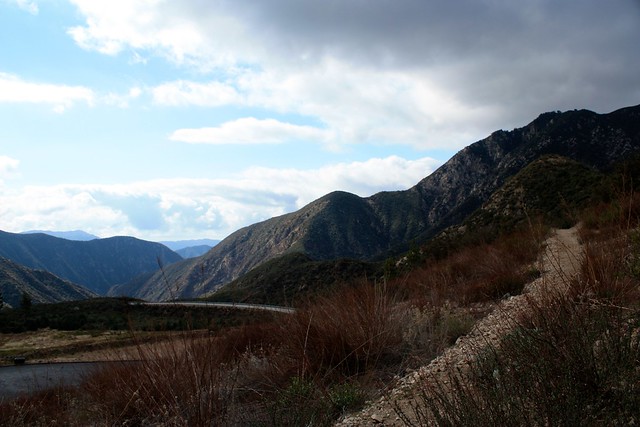 This is a trail that doubles back on itself a bit, so you’re going to end up looking at a lot of the same canyons and ridges … as well as the trail itself. 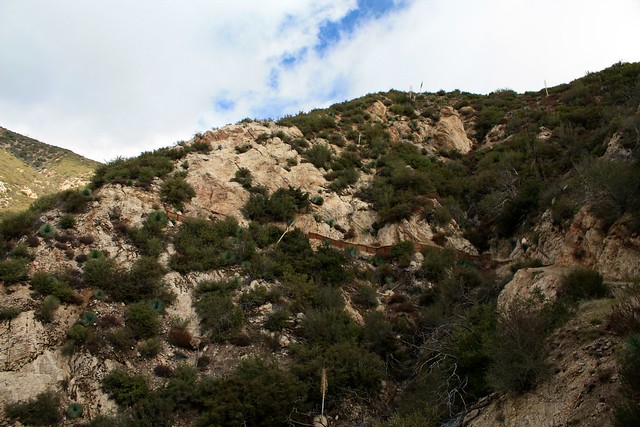 Just before the you hit the mile marker, you’ll get a good chance to look southwest toward Smith Saddle. The incline of the peak (seen here on the left) doesn’t look that bad from here, but the closer you get, the steeper it appears. 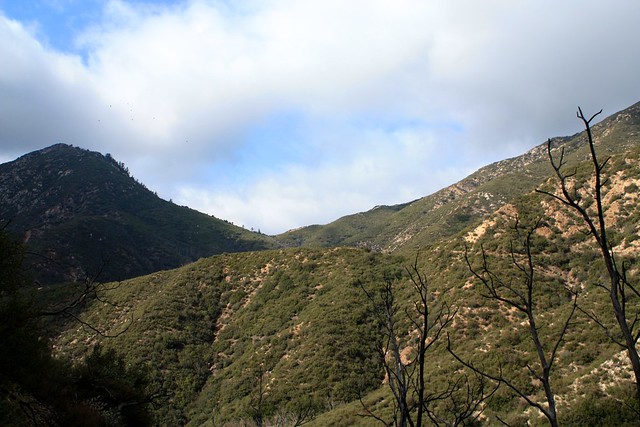 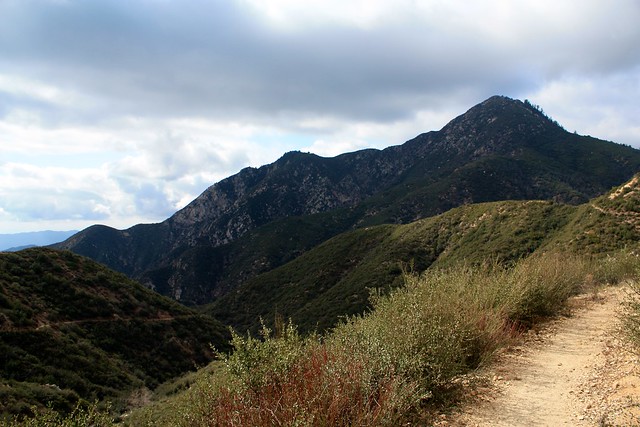 It’s another two miles to Smith Saddle, and other than a few seasonal creek crossings the trail itself is fairly consistent. You’ll only gain a little over 400 feet during this shadeless stretch, but as you venture further away from the 39, the feeling of remoteness grows. Just make sure you save some energy, ’cause the really tough part is just around a few more bends. 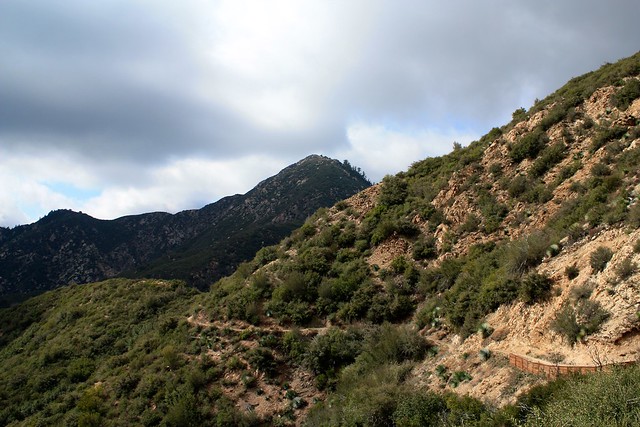 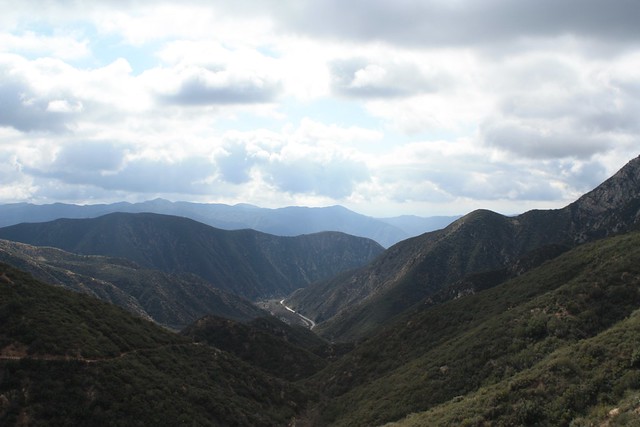 At the 2.9 mile mark, you’ll reach Smith Saddle. A long firebreak extends to the north and the Bear Creek Trail continues into the San Gabriel Wilderness to your west. If you’re not up for scrambling, turn around here and enjoy the pleasant hike back to the trailhead – or continue further into the San Gabriel Wilderness (free Permit required). If you’re in the mood to get your hands dirty, turn south and face your next challenge: 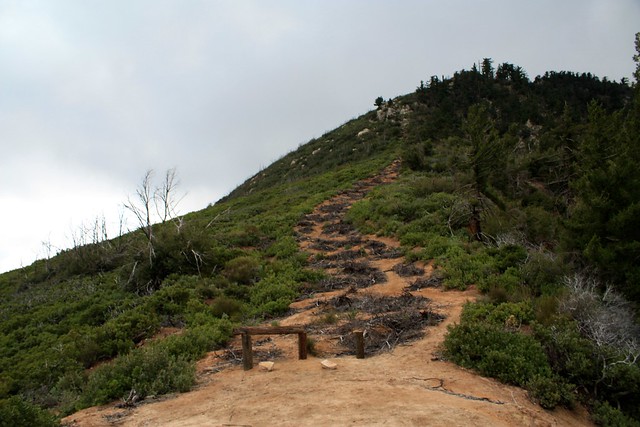 The next half-mile is almost all scramble, with just a little bit of bushwhacking thrown in for good measure. You’ll be gaining about 800 feet and using your hands and knees in a few places. It’s steep, but there is a fairly apparent use-trail and many solid rocks to hang onto along the way. Just take your time and you’ll be fine … and be sure to occasionally stop to soak in some of the views, too. 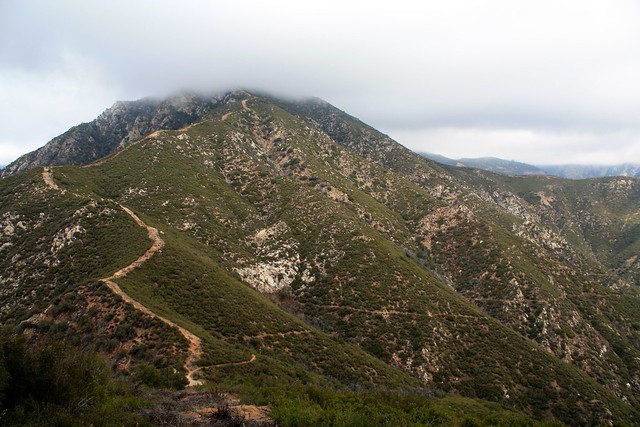 After a bit of scrambling you’ll reach a small false summit, but the true summit will be clearly visible and most of the tough scrambling is now behind you. Hike confidently to the peak, look for the register near the USGS marker and take in your (hopefully non-cloudy) summit vista. 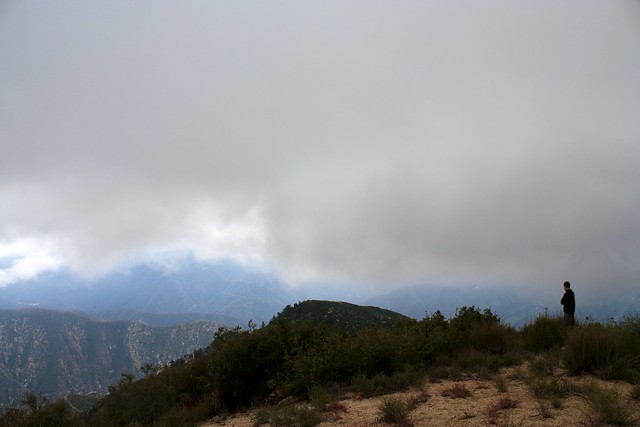 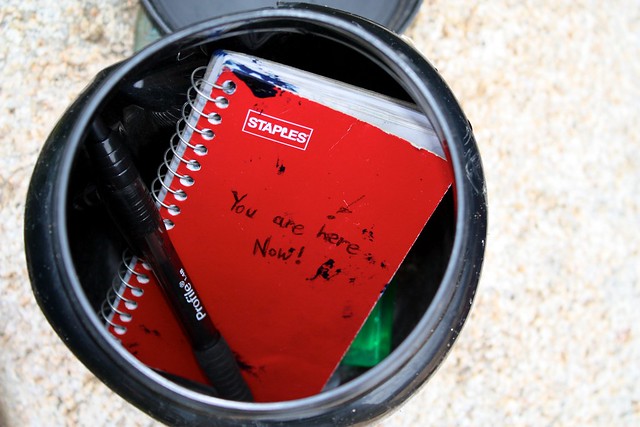 For those interested in seeing what the 20 minute scramble descent looks like, here’s a sped-up video shot with a forehead-mounted camera on the way down:

Return back the way you came!

Excellent. The Upper Bear Creek Trail is in fine condition and there aren't any junctions until you leave to hike up the firebreak to the summit of Smith Mountain. That fire break is much different, though - a sometimes nearly-vertical scramble / climb through use-trail and brush on ground that can sometimes be pretty loose. Use caution here and take your time - there are plenty of rock handholds, but it's easy to psych yourself out in a situation like this.

From the 210, take the CA-39 exit north 18.1 miles into the San Gabriel Mountains National Monument. Park at the large trailhead at Upper Bear Creek Trail -- look for signs for the San Gabriel Wilderness and an outhouse. If you've hit Coldbrook Camp, head back 1/4 mile. Display your Adventure Pass.

Hiked this Aug 12, 2016. The trail before the scramble was still very well maintained. I started the hike around 7am, and the sun was already hot. But I was surprised by the amount of shade going up since a lot of the trail is behind canyon walls. There was even a small bit of shade still on the trail at 10am. But there were certainly no trees around for any shade. Still drank all 3 liters of water. I saw one small dark green non-rattlesnake snake. After this hike, we went to the nearby Lewis Falls to cool off. Then up to the Crystal Lake Cafe to get a burger. Excellent day in the mountains. Kudos to the Modern Hiker!

Just did this one today. Nice views. Steep scramble. Saw two rattlesnakes. First one on that last .5 mile scramble. Almost stepped on the second one when I was on the return, about 2.5 miles from the trail head. Be careful. :)

This is really a wonderful hike. And the Forest Service has done a great job lately in eliminating the Hispanic poachers from the area. Unfortunately the area is currently infested by rattlesnakes and is best avoided in favor of the higher elevations where neither creature seems too comfortable.

Finally did this hike last Sunday. It was actually easier than I thought it would be, and quicker and easier than going north on the firebreak. Yes, it's steep, but the rocks and vegetation on this north-facing slope are a lot better at holding back the earth than the dry and barren south-facing slope on the other side of the saddle. I say this having walked up that south-facing slope the previous week.

Outstanding views, with lots of snow-covered peaks to the north and northeast.

This was a great hike! The conditions right now are perfect. There is still a lot of snow on the higher peaks in the San Gabriels, so if you are not into using crampons / snowshoes, this one is a perfect alternative. The scramble to the top was fun, and actually there was a senior group taking this challenge as well. From the top the views onto the snow-covered mountains is great. Also there was quite a variety of wildflowers on the trail. My favorite was the lone poppy seed patch.

That Google Earth thing is just amazing. I can easily trace the whole hike, and recognize the topography from real life.

I hiked much of this path just over a year ago. Hiked to the last saddle, then headed down into the upper reaches of Bear Creek. After reading this post a few days ago, I was thinking of maybe trying for Smith Mountain this weekend. Unfortunately, personal obligations are conspiring to keep me from taking a long hike. Shame, because it's the last weekend of February, and I think my Adventure Pass expires this month.