A tranquil route into a wooded canyon on the Silver Moccasin Trail. A good conditioning hike with beautiful campgrounds, streamside views for almost the entire run, and plenty of boulder-hopping and stream crossing along the way. This would be a great candidate for a first-time moderate hike – it’s easy enough for experienced beginners, but difficult enough to make you feel like you worked for it. It’s secluded enough to feel like your own corner of the forest, and fairly difficult to get lost along the way.

NOTE: This area was badly burned in the 2009 Station Fire. Trail conditions may differ from the description below – be sure to read the comments to see recent trail reports!

Shortcut Canyon, like the Santa Anita Canyon, was a major thoroughfare through the San Gabriels before the Angeles Crest Highway was built — back in the “Golden Age of Hiking,” when trail camps and resorts dotted the entire mountain range. Today, Shortcut Canyon is preserved as part of the Silver Moccasin Trail, which runs over 53 miles from Chantry Flats to Vincent Gap in Wrightwood. This route takes you from a very accessible trailhead from the Angeles Crest Highway, deep into Shortcut Canyon and into West Fork Camp. It’s pretty tough to miss the parking area from the road. (As of February, 2015, some hikers have reported the trailhead sign is still missing or in bad shape. For accurate location of the trailhead, use our Google Maps directions). 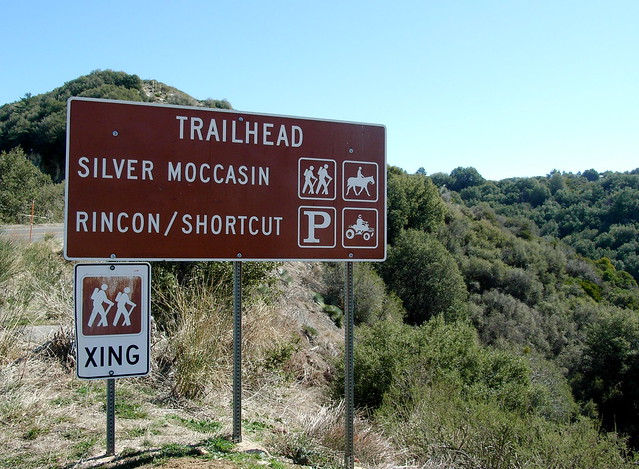 The Silver Moccasin Trail into Shortcut Canyon starts off with a few quick, steep switchbacks as it makes its way to a tore-up fire road just below the paved Highway. There are signs to the trail, but they can be tough to see, so when you get to the road, take a right and hike toward the west, over the deep ruts. 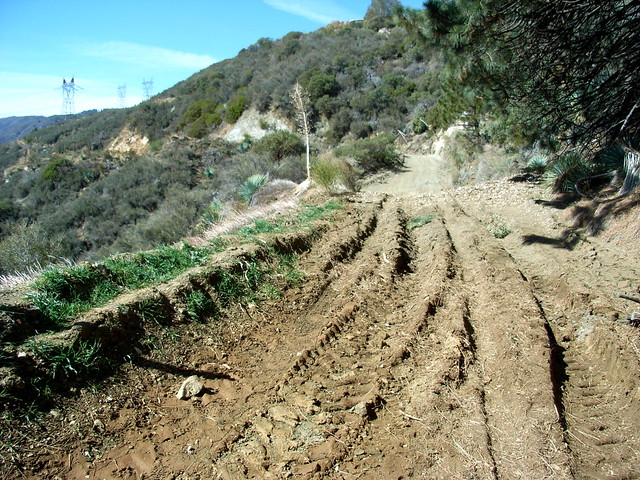 The road is not very picturesque, but you won’t be on it for too long. After a very short distance, the trail leaves the south side of the road and descends toward the canyon floor. This opening section of trail is similar to other trails in the front range — namely, dusty, lined with chaparral and yucca, and mostly shadeless. You probably won’t notice the lack of shade on the way down, but if it’s a hot day, you’ll definitely notice it on the way back up. 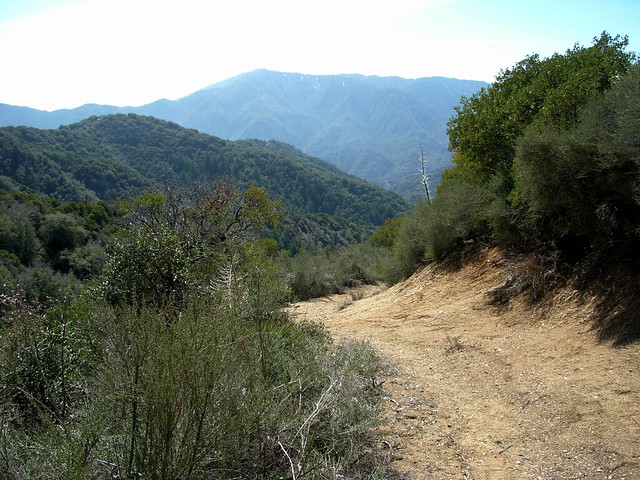 As you make your way toward the canyon floor and water, the bushes and trees around you start to grow in a bit fuller, providing more and more shade as you head down. There are few downed trees on the trail, a few of which are on some moderately steep slopes. They are passable, just take care. 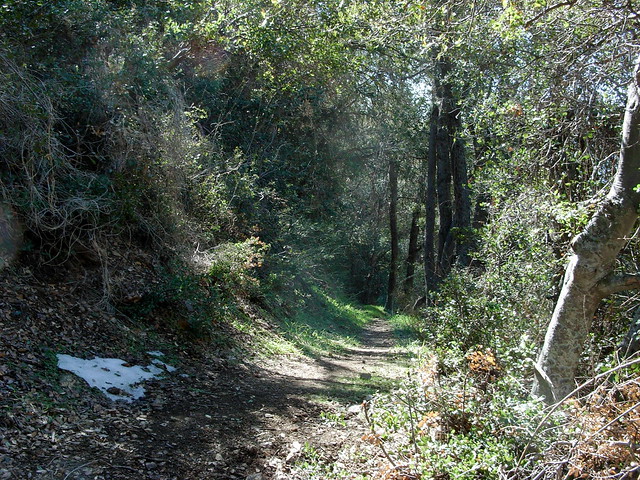 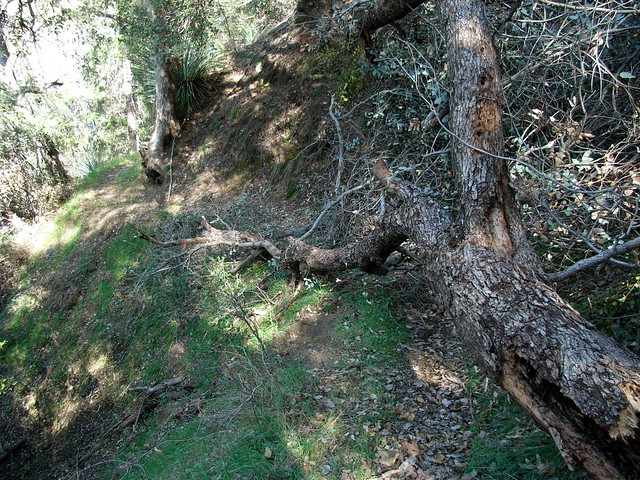 After about 1.6 miles and descending 1070 feet, you’ll reach the bottom of the canyon, you’ll meet up just south of the confluence of the East and West Forks of Shortcut Canyon Creek, where the water pours through a low cascade into a pool and continues down the canyon. It’s a lush and idyllic setting, the water running its way through a rocky riverbed surrounded on both sides by sycamores and cottonwoods.

Get yourself acquainted with the creek — as you’ll be spending the remaining two miles of the trail crossing it 34 times each way. 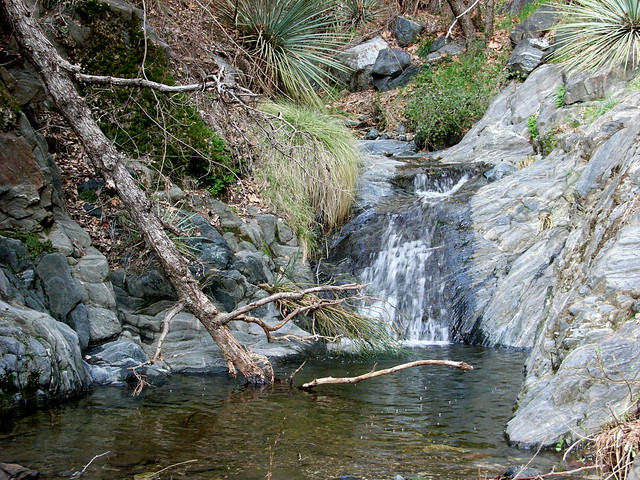 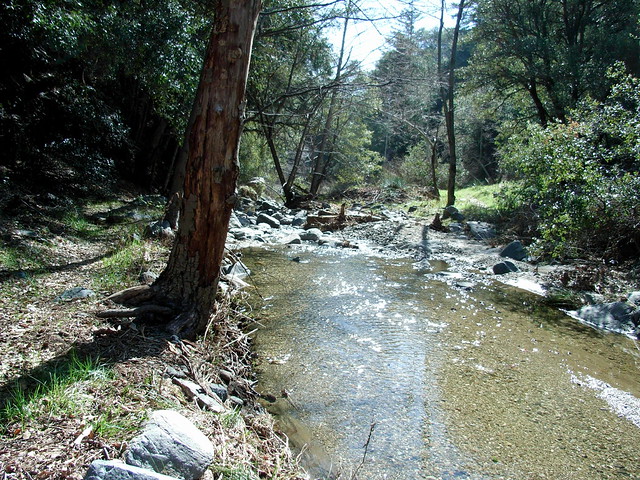 Depending on the level of water in the creek, those crossings range from simple “big steps” over narrow sections, to boulder hopping and — in a few cases — fording your way through the water. Either way, be sure you wear grippy, waterproof boots on this trail — or shoes that dry fast. If we’ve had rain, you’re going to get wet.

Although this canyon is part of a major long-distance trail, it looked like it hadn’t been traveled in some time when I was on it. Some of the sections were overgrown, and the footprints I did see in the mud looked like they’d been left a few days before. If you’re lucky enough to get this canyon to yourself, savor it. Take a few chances hopping boulders, splash yourself with some of the cold creek water, and enjoy the short sections where the trail just meanders along the banks.

Right before you make it to West Fork Camp, Shortcut Canyon Creek makes a sharp turn to the east, and the trail crosses twice at a wide, fairly shallow section of the stream. 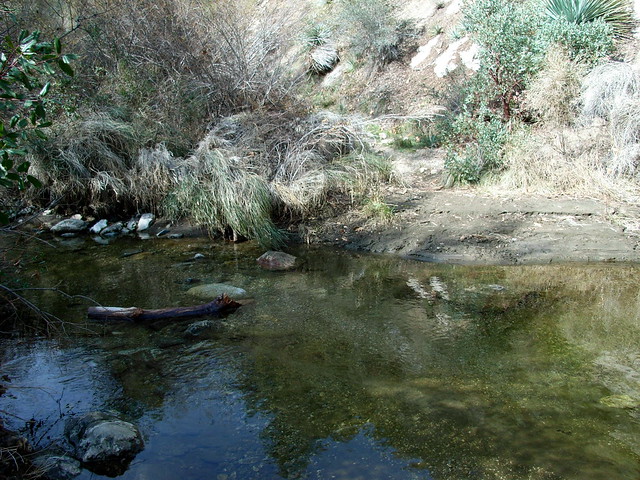 During my hike, this was the only place where I had to actually ford the water to make it across. The creek was about ankle high, but a quick step and waterproof boots kept my feet mostly dry. Even at this low level, there weren’t any prominent boulders to hop onto, so be prepared to run quickly and get a bit dampened.

Around another two bends in the canyon, the creek meets up with the rushing West Fork of the San Gabriel River. The boulders here are bigger, and the river is deeper and faster. Directly in front of you on the trail is the West Fork Campground, surrounded by a wall of rocks. If you continue a few yards west on the north shore of the West Fork, there’s a slightly easier crossing than the implied crossing directly to the trail. But hey, it’s a stream crossing. Do it where you’re comfortable. 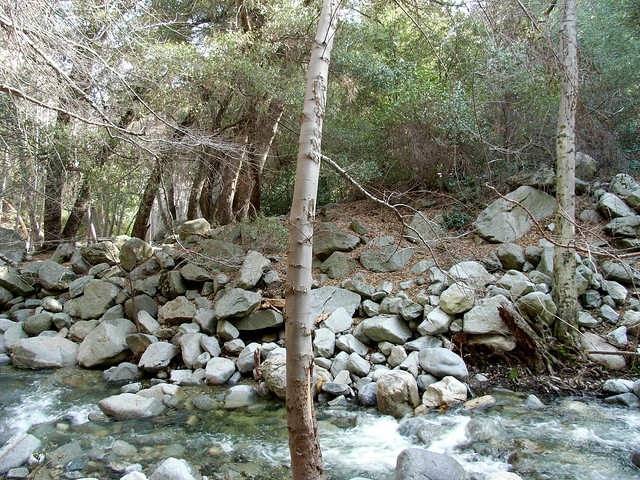 West Fork Campground is a beautiful site to drop your gear and set up a tent. It’s got an outhouse, fire pits, a few stoves, picnic tables, and plenty of shade. It’s also surrounded on three sides by rushing water (with one area that looks like a particularly good swimming hole), which I’m kind of a sucker for. 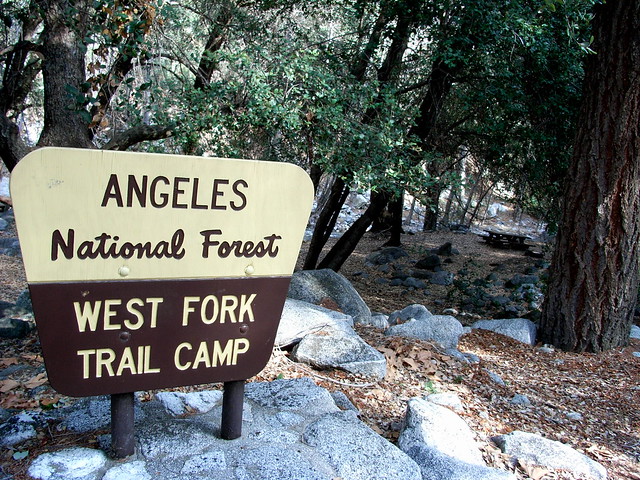 Here, the Silver Moccasin Trail meets up with the Gabrielino Trail, and it’s possible to head to Chantry Flats (8.8 miles), Switzer Falls (9.5 miles), or take a peek at the surrounding mountains from the top of nearby Mount Wilson (4 miles and 2800 feet of elevation gain). If West Fork is crowded, or if your legs still want to do some exploring, you can head just over another mile to DeVore Campground, the site of an old fishing camp and resort that’s now another USFS trail camp.

While relaxing at West Fork, be sure to note the small rock and cement foundation just west of the tent sites. 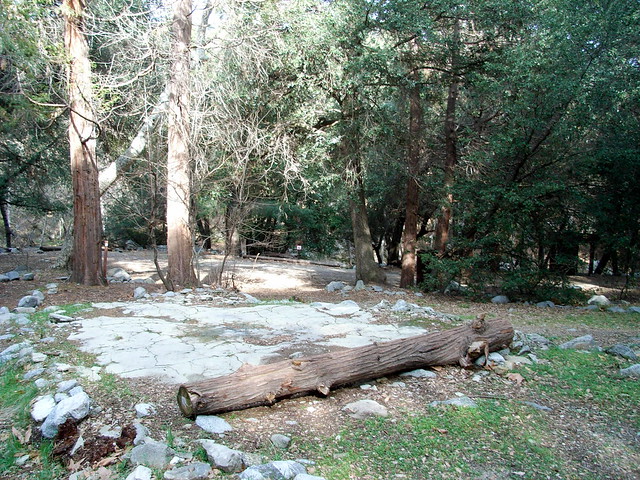 This is the remaining foundation from the first US Forest Service ranger station in California (built 1900), which has since been moved down the Angeles Crest Highway to the Chilao Visitor’s Center. Not much to look at now, but it’s a point of historical interest.

Once you’re done, continue back north in Shortcut Canyon, enjoying all the same stream crossings you’ve conquered before — by now, you’ll probably have a bit more confidence in making the jumps.

There is one section on the return route where a false trail just past the stream ford, where it appears the trail continues on the east bank of the stream and rises into the forest above it. Instead, the trail crosses the river.

If you take the false trail, you’ll figure it out pretty quickly, as it soon reaches some very difficult, step wooded terrain that you won’t remember from the way in. Enjoy the shade and stream while you can — you’ll be feeling that final ascent back to the trailhead. 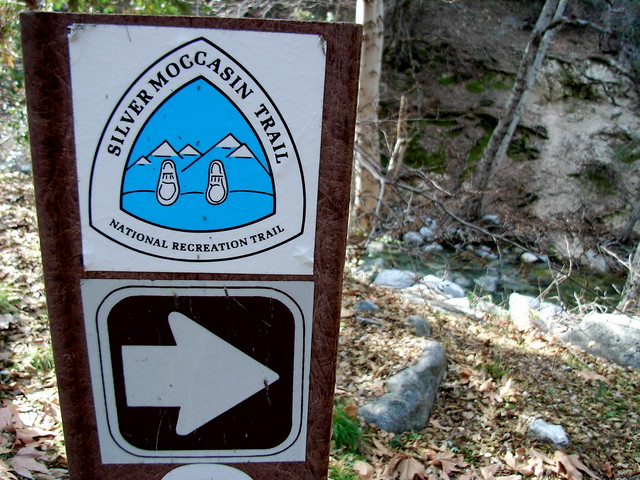 Fair. The trail may be difficult to keep track of near the road, but once you get into the canyon, there aren't any spurs or junctions until you reach the campground. There are, however, a few overgrown areas, and a handful of places where downed trees and brush block the trail, requiring a bit of bushwhacking. This area was badly burned in the 2009 Station Fire. Although it is recovering, your experience on the trail may differ from this write-up.

There are 7 campsites at West Fork Trail Camp. They are first come - first served and campfires require a permit.

ake the Angeles Crest Highway from the 210, 18.9 miles into the forest. The trailhead is marked with a sign, past Mount Wilson Road and just a quarter of a mile past the Shortcut Picnic Area. Depending on where you're looking, it may be easier to spot the Shortcut Picnic Area than the trailhead sign - just drive slowly. Display your Adventure Pass.

Wow - that sounds amazing! I'm glad you got to see such a good show down there :)

Thanks! I actually did go to Shurtcut Canyon on the 4th if July. Not even one other person on the trail, it was amazing. Very little water left in the creek but the wildflowers were breathtaking, although very overgrown once you get down to the canyon. Not an easy climb back up but it was worth it, especially since we got to see so many Ocillated Humboldt Lillies with Western Tiger Swallotails everywhere.

Always looking for less traveled trails, thank you for the recommendation!

Shortcut Canyon is still a beautiful little trail that's rarely used, although we're likely at the end of the time of year when there's decent water down there. If you're looking for trails less traveled, the little network on the north side of Wilson is a good place to explore.

This blog post is pretty old, anyone know how this trail is these days? Looking for roads less travelled in days of Corona...

In my experience in the West Fork area, if you encounter a vine that looks just like poison oak but has big thorns instead of an oily sheen, you've got blackberry. There's a ton of it between WFCG and Devore Trail Camp. Fruits and ripens in late summer, Aug-Sep. depending on how dry it is. Freaking delicious, but those thorns will shred you.

Hiked this today (6/9/2017). The trail was in decent condition but with the creek bed dry in several spots it can be easy to lose if you aren't paying attention. The flora got pretty dense in many places and I'm still picking seeds out of my socks. Saw what we thought was a striped racer and had a fairly close encounter with a medium sized rattlesnake once we were down in the canyon. We talked with some campers who hiked in on Red Box, but nobody else on the way in or out.

Did you hike in and stay? Is it a busy area or secluded. I am trying to find a nice secluded area.

the hike out is what gets you on this one. DEFINITELY don't forget to pack the bug spray!