The Sherwin Lakes are a pair of subalpine lakes on the southern rim of the Long Valley Caldera, in which sits the town of Mammoth Lakes. These two small lakes also host several groves of aspens, which put on a vivid show of fall color from the middle of September to the middle of October. This moderate hike travels through dry Jeffrey pine and white fir forest to reach the two lakes. 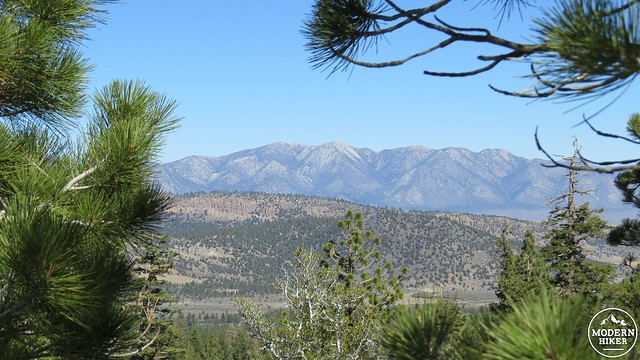 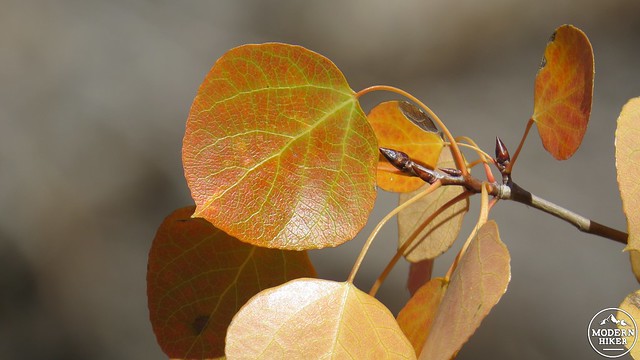 The caldera previously mentioned will account for the views while providing some interesting geological history. About 760,000 years ago, a massive eruption blew apart the massive volcano that once stood on the site. The explosion, which was approximately 500 times more powerful than the Mt. Saint Helens eruption, was so great that it expelled all of the magma within, causing the magma chamber below to collapse. A secondary explosion blew massive volumes of ash across the western half of the United States, and much of that ash resettled into the gaping hole left by the collapsed magma chamber. The town of Mammoth Lakes sits in the western half of the caldera. 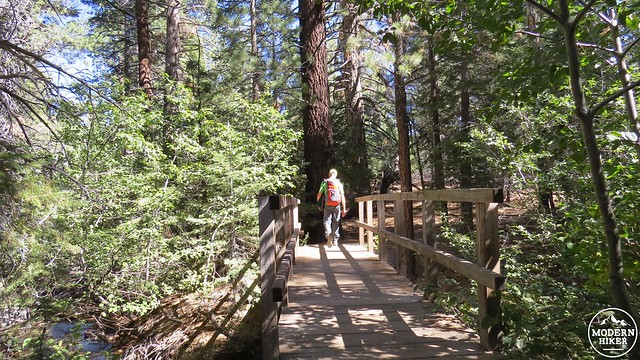 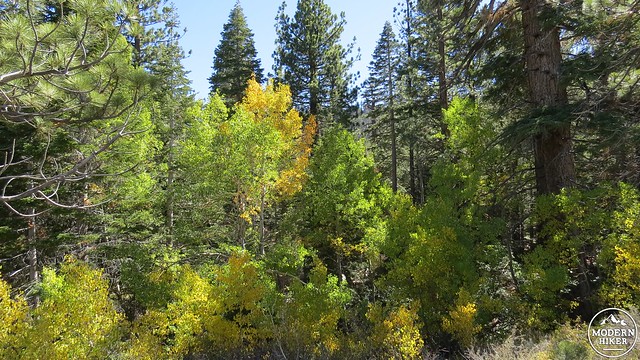 You probably won’t need to worry about eruptions when you visit Mammoth as there doesn’t seem to be any imminent, immediate, or even long-term concern for future eruptions. Geologists suspect that the magma chamber below the caldera has mostly crystallized and that any future eruptions are unlikely. However, the numerous hot springs and fumeroles, as well as the frequent earthquakes, attest to the area’s continued volcanism. Likewise, the hot springs provide Mammoth with a magnet for tourists in addition to the prodigious volumes of snow that make the area a haven for skiers. 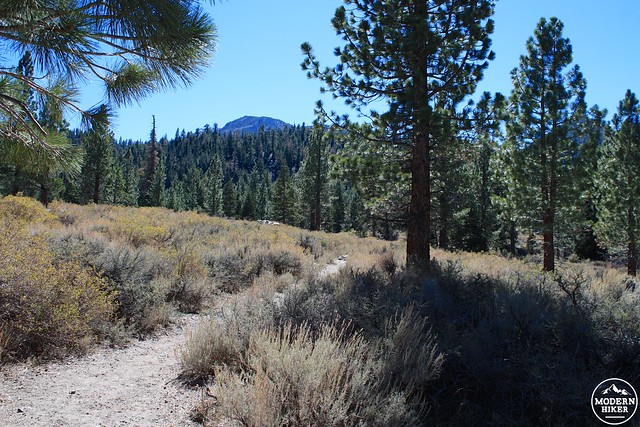 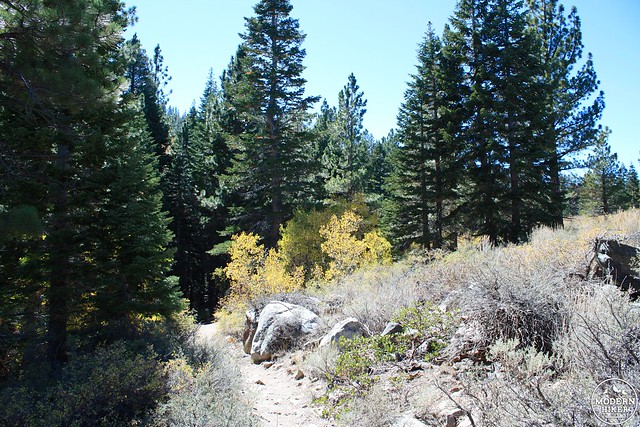 You will find the trailhead at the end of an access road leading from semi-paved Sherwin Creek Road. After passing the signed trailhead, the trail plunges into a cool, shaded section alongside a creek. As you cross the creek, be sure to enjoy the sound of running water as you will not encounter any other water until the lakes. There are a few aspens and other deciduous trees here, but be aware that the majority of the color occurs at the top of the bench upon which the lakes are situated. 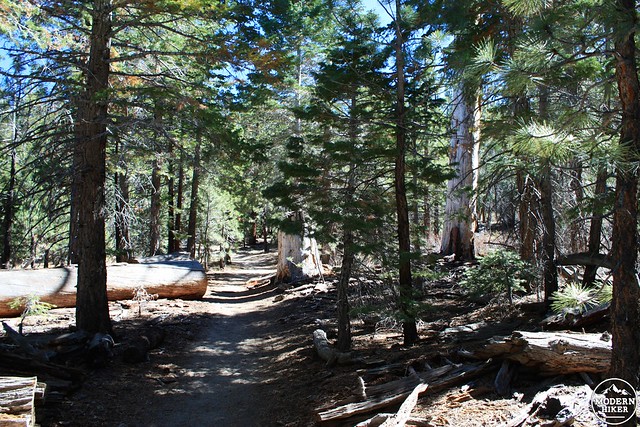 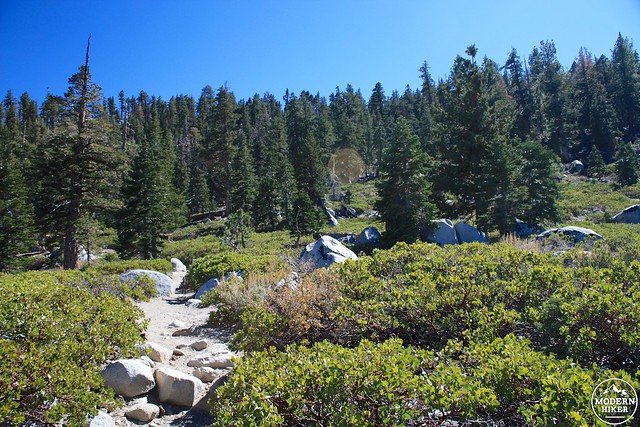 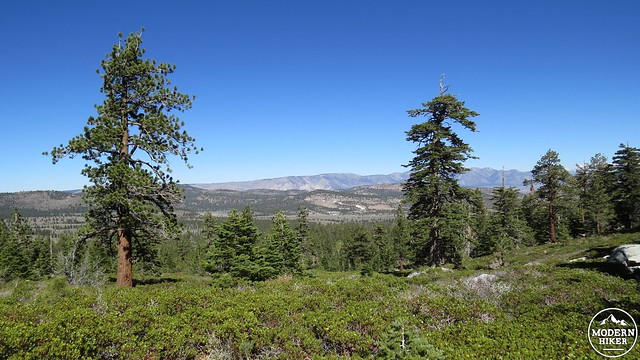 Just past the creek, the trail will ascend through a dense stand of pines and firs before beginning to switchback up along the slope leading to the lakes. This long climb is somewhat tedious, and the semi-exposed trail can be uncomfortable on a warm day. You will be rewarded for your diligence when the trail gains about 400-500′ of elevation as you gain partially obscured views north over Long Valley and the town of Mammoth Lakes. 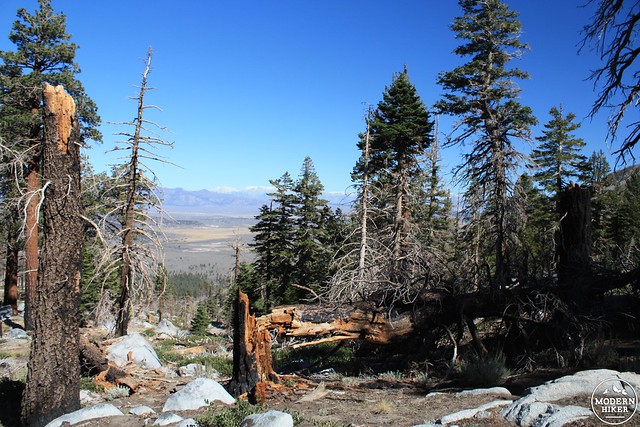 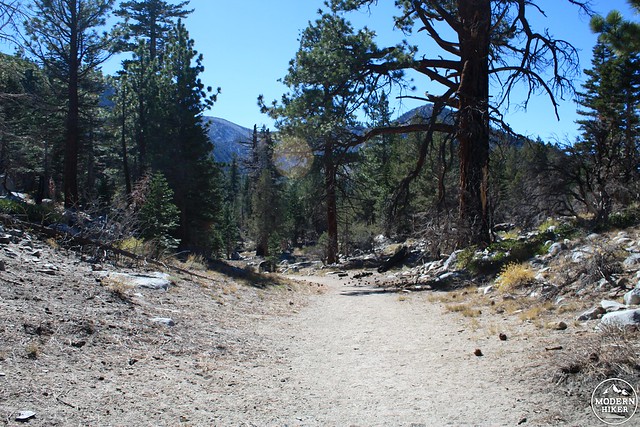 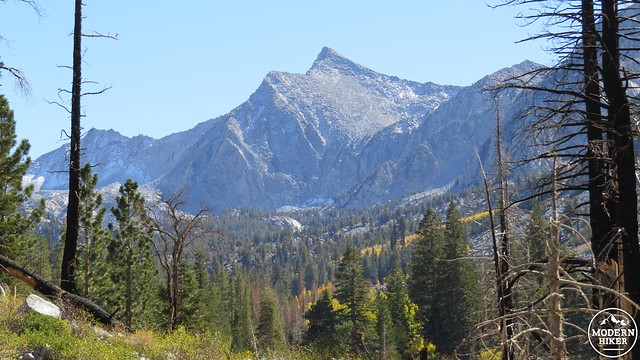 The trail will conclude its switchbacks after rounding a bend on the side of a ridge before entering a sandy flat. The trail passes through this flat and then turns left to begin making the final ascent to the lakes. You’ll pass through a section where a small fire burnt through some of the forest, at which point you will begin to see the first signs of fall color from stunted aspens growing amidst the recovering forest. The trail veers left and passes through the occasional downed tree before coming to another sandy flat that looks like an optimal campsite. Turn right here and make your way across this flat to reach the shore of Sherwin Lake. 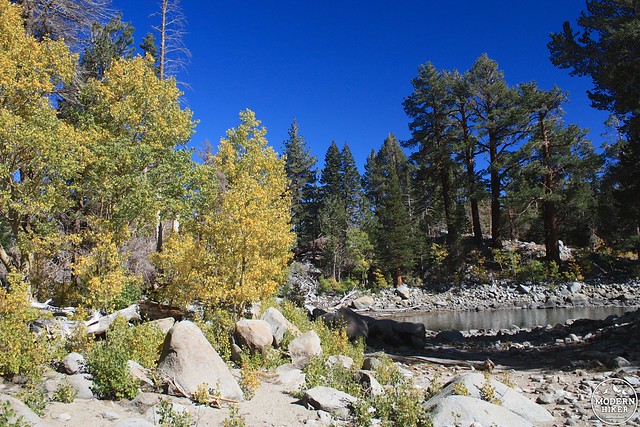 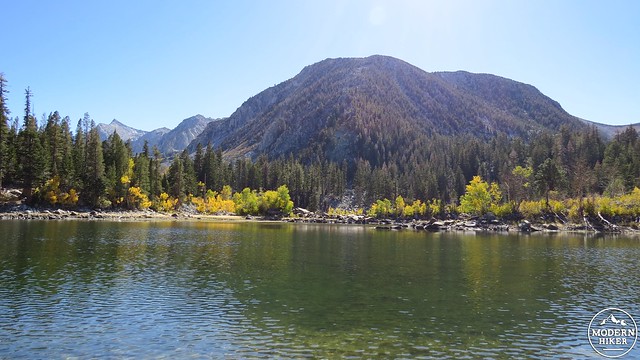 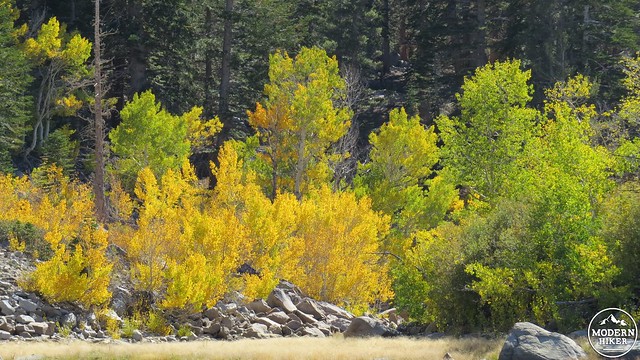 At the time of writing (October 2014), the water volume in the lake was well below average, making the lakes appear less impressive than they would otherwise. This is the result of the historic drought of 2013-2014 (and hopefully not into 2015). However, there will likely remain water in the lake basin, which was also full of trout leaping out of the water to catch the insects that flit across the surface. Along the south and west side of the lake, you will see several small groves of aspen trees. During the latter half of September to the middle of October, these aspens will come alive with warm hues ranging from lime green and yellow to vivid, fiery oranges and even reds. 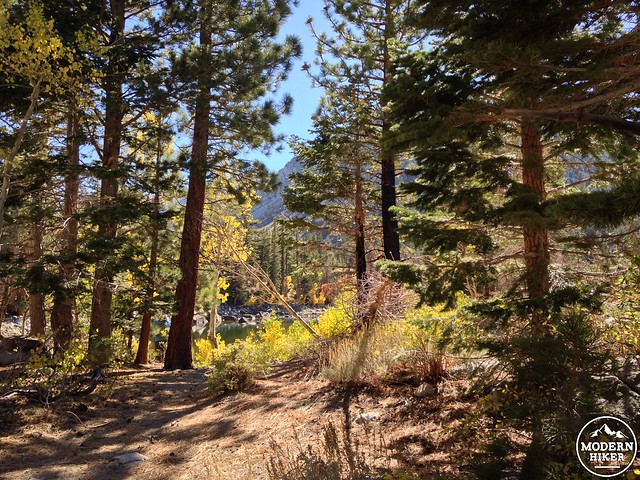 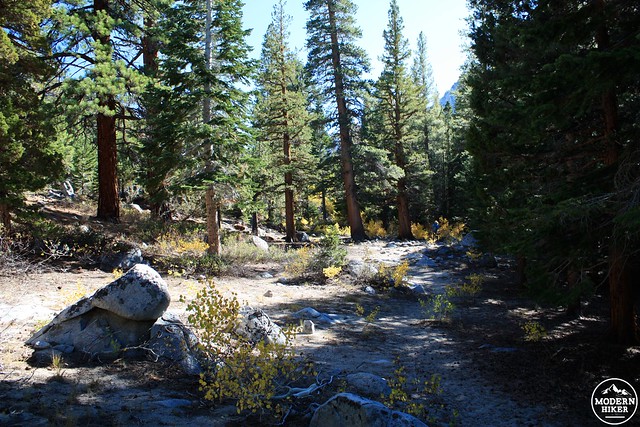 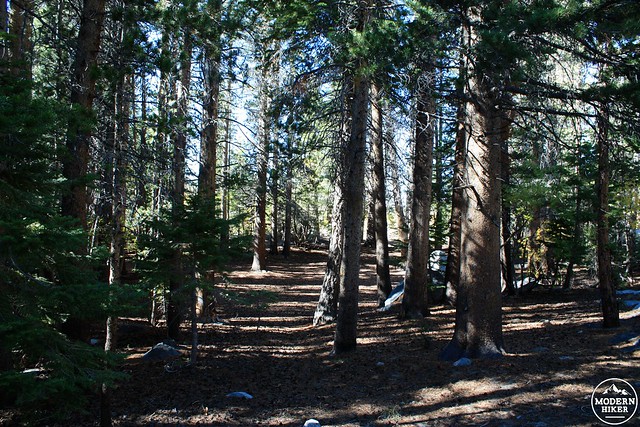 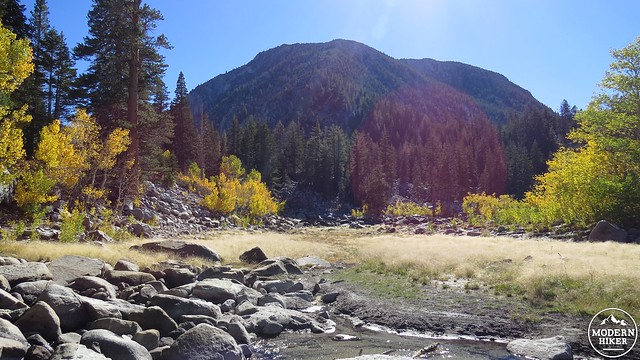 It is possible to reach the second lake, which lies just to the west of the first, by doing a little bit of scrambling. After rejoining the trail and continuing south, the trail will climb through a rocky, forested area before coming to a small, sandy depression with a cluster of stunted aspen trees. A cairn marks a faint use trail that leads up the low ridge on the southern end of the lake. This use trail will pass several good campsites before coming to a clearing set within a dense thicket of lodgepole pines. From here, you can follow the GPS track and scramble down the side of the creek at the inlet. The second lake is on the other side of this creek, and depending on the water level, you can rock hop or wade across to reach the second lake. 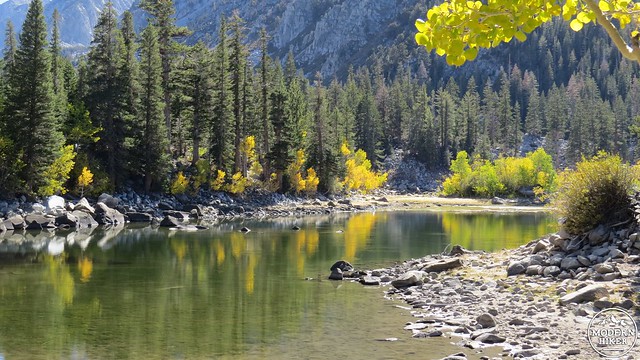 Once you’ve enjoyed the lakes, whether it’s on a day hike or overnight backpacking trip, retrace your steps to the main trail and follow it back down the switchbacks to the car. From here, you can make your way back into town to replenish all of the salts and carbohydrates you just wantonly destroyed.

Through the beginning and along the switchbacks, the trail is easy to follow and does not have many maintenance issues. This changes once you reach the burn section, where downed trees are a possible obstacle. The trail gets confusing in a few spots around the lake, and if you aren't paying attention, it's easy to wander off. The use trail leading to the campsites and the second lake is not well-marked, but is easy enough to follow once you're on it.

Numerous camping options are available in the area, including the option to backpack near Sherwin Lakes as it is not within the Wilderness area. The Inyo NF's web site is unclear as to whether you can camp there and NOT have a fire without a campfire permit, so it's best to call for proper permit info at 760-873-2483.