Despite our currently ongoing drought conditions, there is still hope for wildflower lovers here in Southern California. Spurred on by a recent trail report from KCET’s Zach Berens on SoCal Wanderer (and some great photos popping up in my social media feeds), I headed up north to Saddleback Butte State Park to see if the wildflower show was still going strong – and it most certainly was.

This 2,995 acre state park may seem like it’s out in the middle of nowhere but during the spring months it is definitely worth the 90 minute drive up from Los Angeles. Head to the park’s north entrance near the corner of Avenue J and 170th Street East, pay the day-use fee and find a spot to park near the picnic area.

This region of the park has a pleasant and easy paved nature trail that’s wheelchair accessible. There is also a visitor center with varying hours (call 661-727-9899 for more info) and a water fountain – be sure to fill up before you get going.

This route begins on the paved nature trail that heads south from the toilets. From the very beginning, it’s a gorgeous Mojave landscape – rocky buttes litter the terrain while Joshua Trees seem to spread out before you. In the distance, the north slopes of the San Gabriels may still have some snow on them. 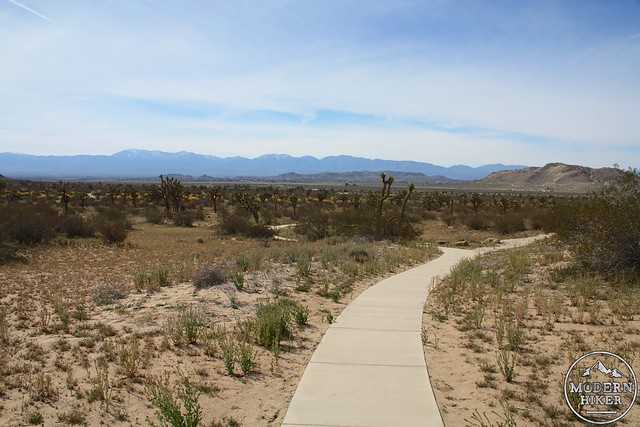 In just over 400 feet down the concrete path, look for a trail that leaves the nature walk heading east toward the butte. This is the Little Butte Trail – and if you’re hiking in the early spring in a good year you may be distracted by all the colorful flowers popping up near your feet.

Yellow coreopsis is the star here, blanketing the desert floor with a carpet of yellow – but there are other flowers in the mix, too. Purple Davy gilias and white Dune evening primroses can be easily spotted on this early stretch of sandy trail, with slightly taller fiddelnecks popping up here and there. 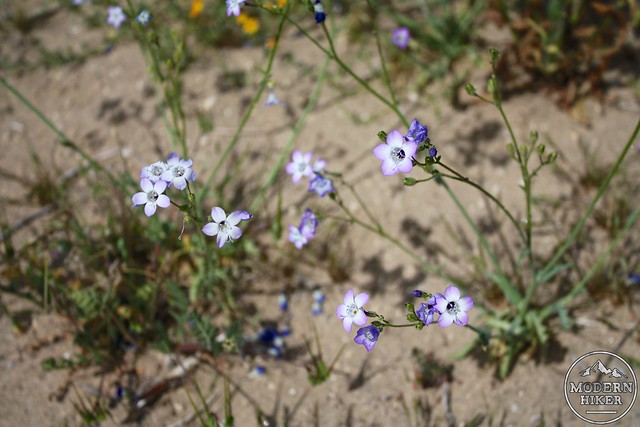 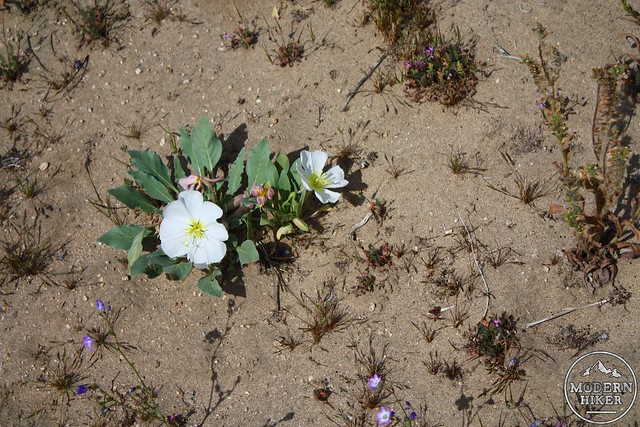 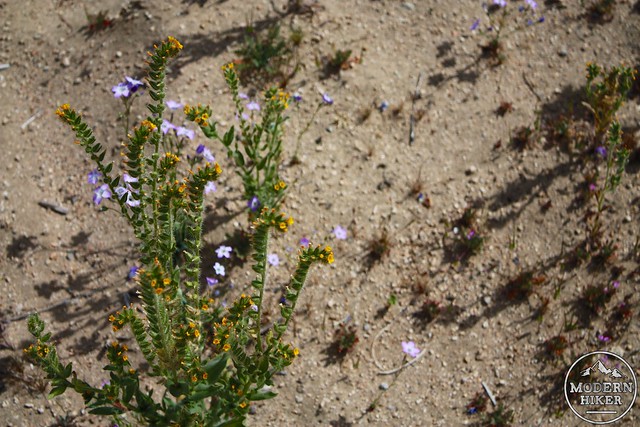 The Little Butte Trail begins in a rock-lined path heading directly toward Saddleback Butte. When the flowers are going crazy, the effect is one of walking through one of the most epic native gardens you’ve ever been in. 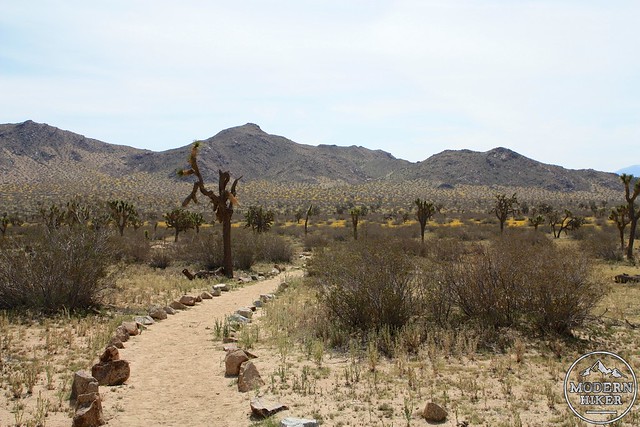 The park also has a large number of Joshua Trees – some newly sprouting and others looking gnarled and ancient. The park was actually called Joshua Tree State Park when it opened in 1960, but eventually people figured out that would be pretty easy to confuse with Joshua Tree National Park. Some of the older trees here are HUGE. 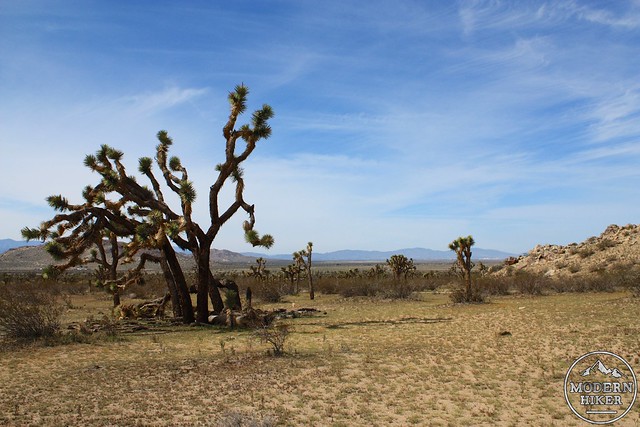 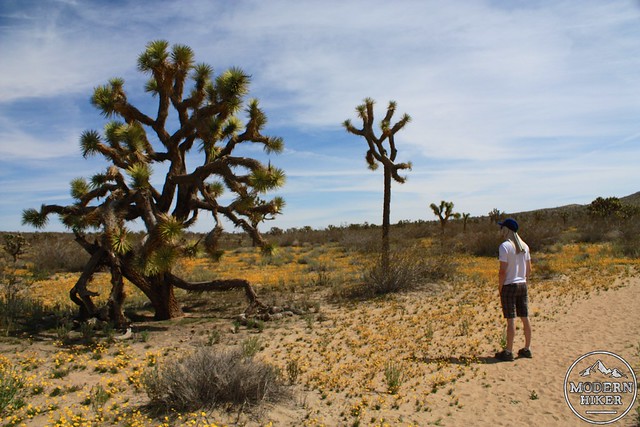 At the 0.1 mile mark the trail crosses the dirt road that heads south to the campground and continues blazing east across the desert floor. The trail gets a little more loose along the way but remains relatively flat. Keep an eye out for Fremont’s pincushions, desert dandelions, desert lupines – and of course, lots and lots of coreopsis. 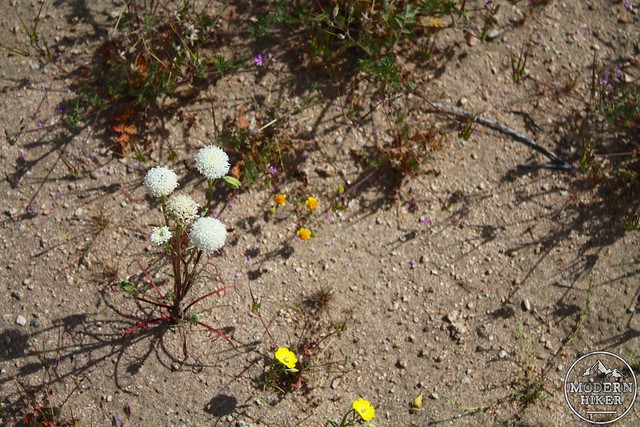 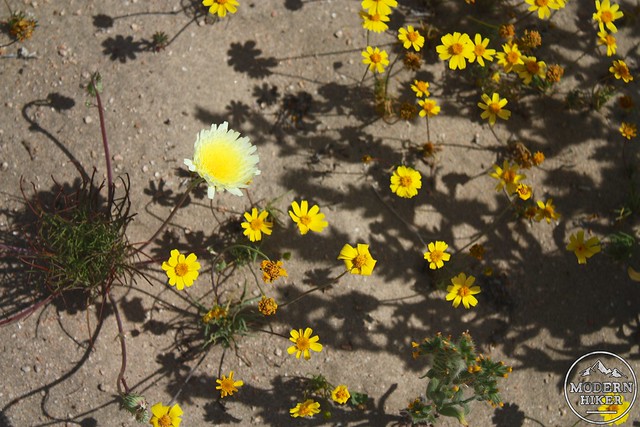 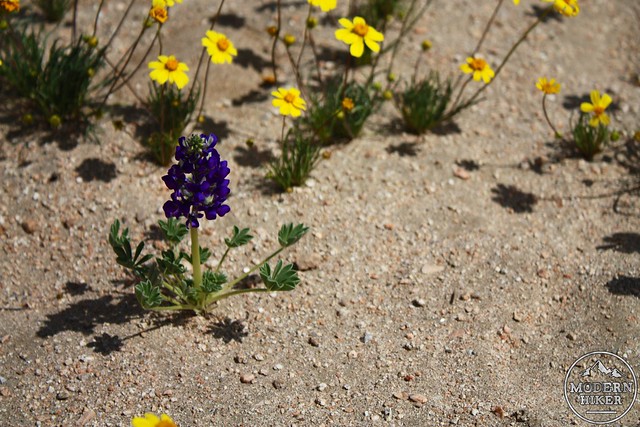 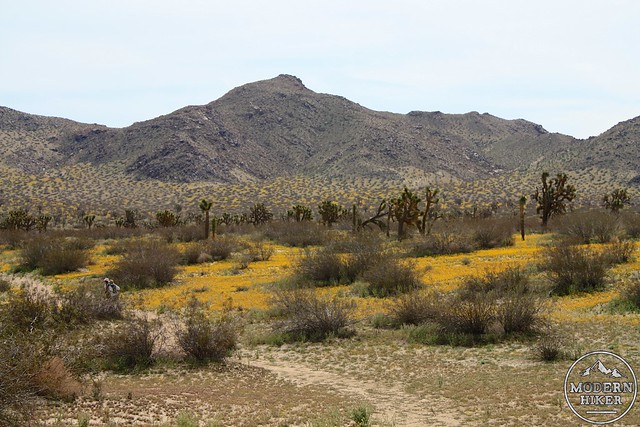 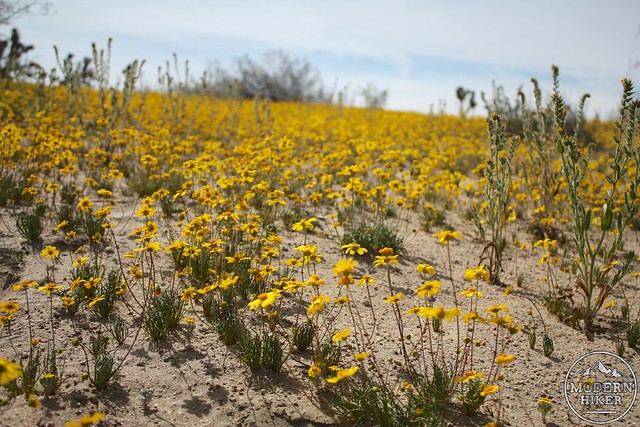 It’s about a mile to Little Butte – which, while being marked as a landmark on topo maps, is really just a little rocky bump in the ground. If it wasn’t named, you probably wouldn’t even notice it – but it’s still a nice place to get a little view of the park if you’re not up for climbing Saddleback. 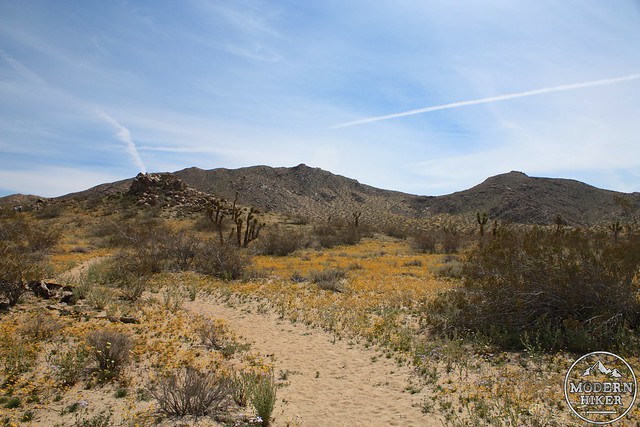 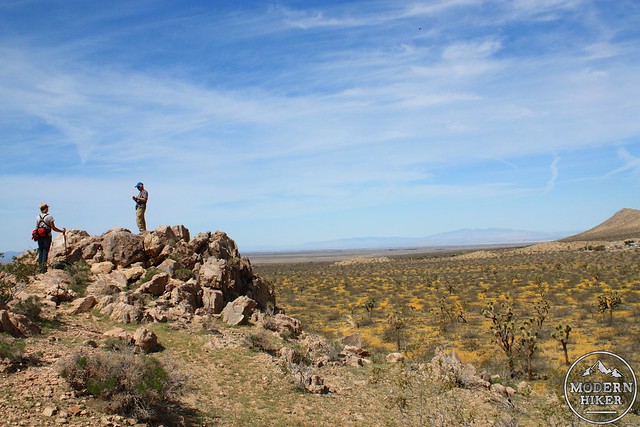 After Little Butte, the trail makes a sharp turn toward the south. You can tell most people from the visitors’ center turn around here because the trail becomes significantly more faint. Even when it’s almost invisible it’s still pretty tough to get lost here, though – there’s almost always at least a small worn footpath visible. 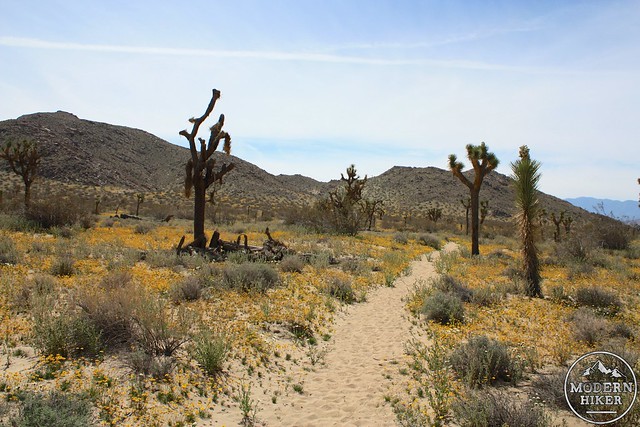 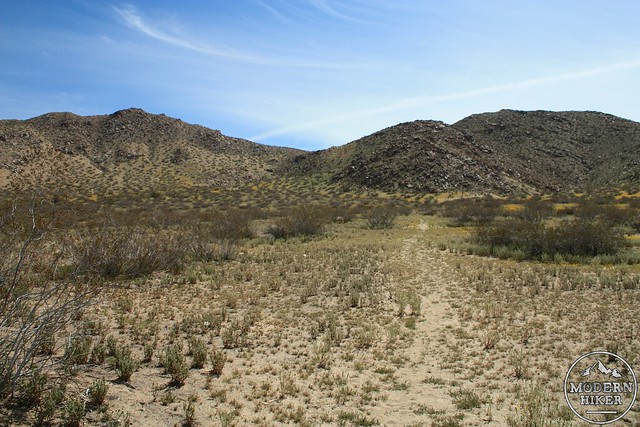 The trail from here on out is still moderate – but significantly more difficult than the trail you’ve been on thus far. You’ll gain more than 760 feet of elevation in under 0.9 miles, beginning on steep, sandy trail that transitions to rockier terrain that eventually transitions to some easy bouldering along routes marked with cairns. It’s very do-able, just make sure you’re prepared to exert yourself more than you have so far – and make sure that you also have more than enough water left.

The trail leaves the wildflower covered floor and climbs through California sagebrush, Mormon tea, and other chaparral on its way up. At the 2.15 mile mark, you’ll get a short break from the incline and – for the first time – an unobscured view south to the San Gabriel Mountains. Be sure to look back toward the desert floor to get a sense of scale of just how much of the desert floor is covered with wildflowers, too. 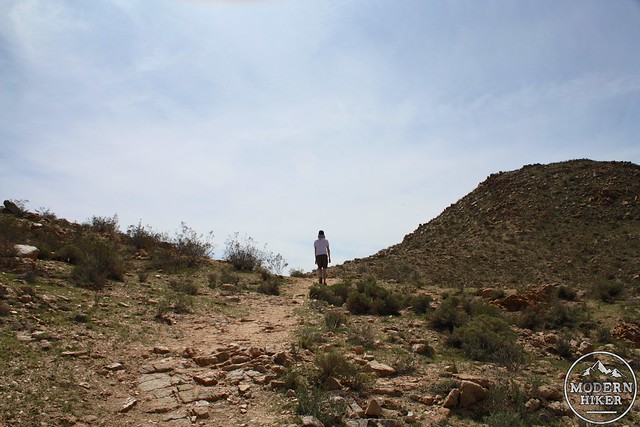 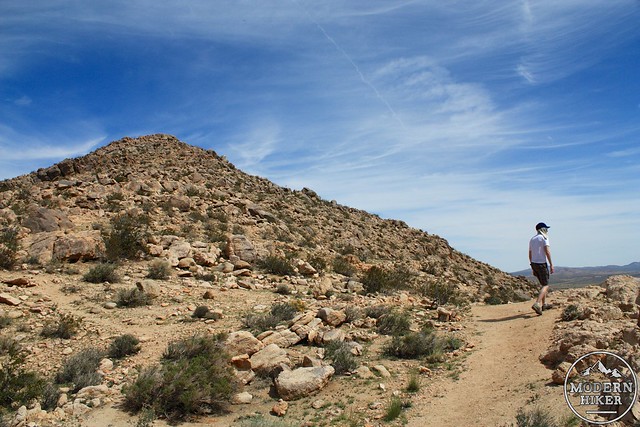 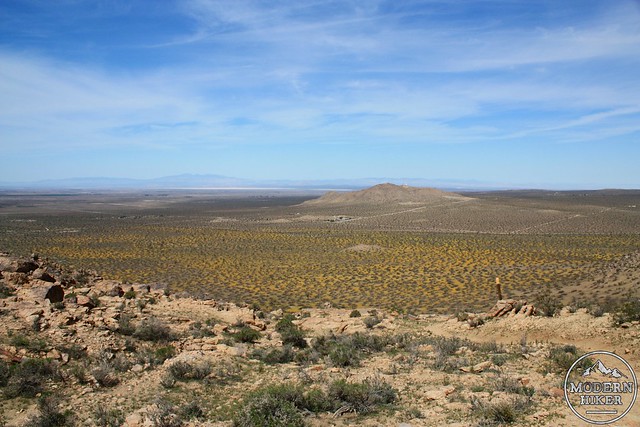 From this little flat area, it’s just 0.3 miles to the summit – and 100 vertical feet each tenth of a mile.

There’s a little bit of scrambling required here and sometimes the trail can be tough to spot – just keep an eye out for the cairns and take it slowly.

When you reach the summit of the Butte itself, there are two USGS markers and a summit register. It’s a great place to relax and soak in all the beautiful silence of the desert – and if you scramble to the east you can get to a rocky promontory that affords absolutely outstanding views of the valley below. 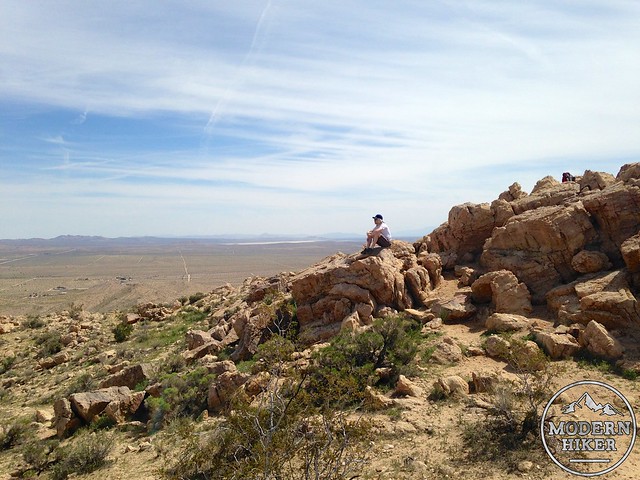 Very good. There are only a few trails in Saddleback Butte State Park and they range from paved nature walks to dirt roads to low and winding paths through the desert floor. Most of the trails are very well maintained - there are a few spots where the trail becomes faint between Little Butte and Saddleback Butte but the route is fairly easy to follow if you're paying attention. From the western flank of Saddleback to its summit, the trail is significantly more difficult than the trails on the floor. Be prepared for steep, sandy slopes that give way to rocky terrain and a slightly scrambly trail to the summit with cairns lining the way.

From the 14 north in Santa Clarita, take the exit for the Pearblossom Highway and continue heading east. In 4.5 miles, leave the Pearblossom Highway and stay straight at the intersection on Avenue T. In 11.1 miles, turn left onto 170th Street East and continue driving north for 10.4 miles. You'll see signs for Saddleback Butte Campground. Continue past them and turn right onto Avenue J. The park entrance will be on your right. The park has a self-service day use fee of $6 (at time of writing).

Thats awesome! I have a hero 3 and have been using a kickstarter I supported called Steadywheel to try and get smooth walking shots, mine still needs some work but is fun to try https://www.kickstarter.com/projects/wildironinc/the-steadywheel-camera-stabilizer

thanks! I just got a new GoPro 3+ and it's MUCH easier to use than the 2 so I'm hoping to add some more video over time.

Wow the wildflowers are amazing. I hiked this before and it was super barren. Nice work on the video too I like how steady the hiking shots are!