This hike in Runyon Canyon is a short, relatively easy trail loop in one of the most accessible areas of Los Angeles’ mountains. This is one of the most popular trails in Los Angeles – and is a great place to play with dogs, spot celebrities, and get some outstanding views of the city. Crowds may leave you wishing for something a little more secluded, but this is a wonderful resource for people who just want to get outside.

Runyon Canyon is a small but extremely popular little patch of parkland in the heart of Hollywood. It has both an easy paved path and a surprisingly rugged trail along the park’s outer border that offers some stretches of intense workouts. The park itself is very popular with dog owners and has several off-leash areas for the canines, so if you’ve got a dog this is a great place for a quick hike … and if you don’t like dogs, you should probably head somewhere else.

This route begins near the park’s southwest entrance, just off Vista Street. Parking can be a chore here, especially on the weekends. Most of the side streets have permit and time restrictions, so getting a spot for your car may be an adventure in and of itself. 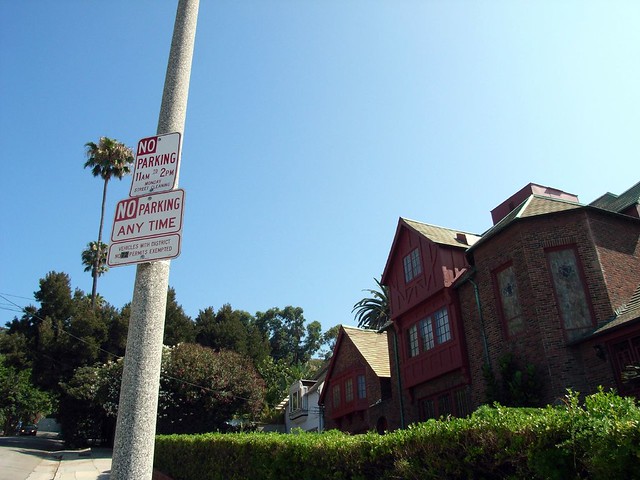 When you get a spot, march up the hill on Vista Street. The road dead ends and you’ll see the gate for Runyon right ahead of you. There’s a small water fountain near the start of this trail (and usually a little water dish underneath the fountain for dogs).

From this starting area, you can either continue up the paved path for an easy, slow, gradual ascent – or you can take the dirt path that climbs up the ridge for a little more adventurous route (note – the plants in the photo are gone – it’s just a dirt path now). 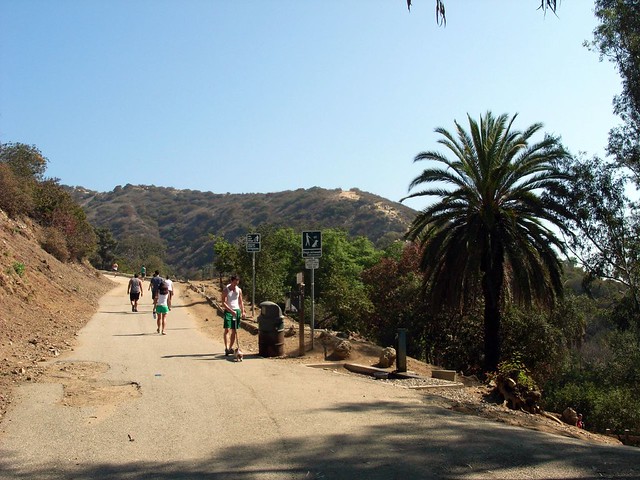 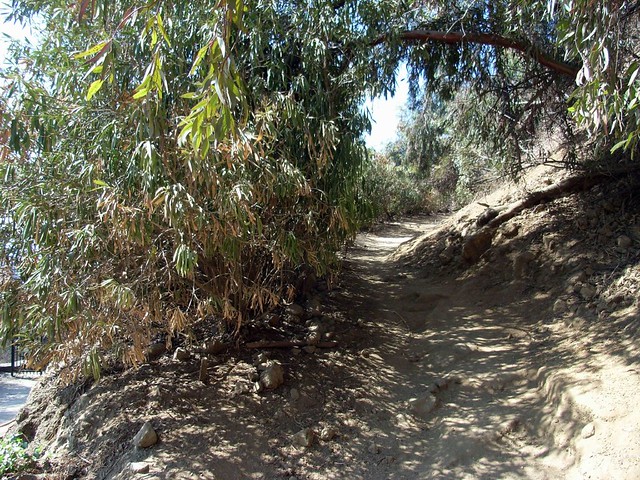 This path makes a no-nonsense ascent up a fire break / mountain ridge. In the summer months it will likely be too hazy for decent views, but in the winter or spring you may be able to see all the way out to the Pacific Ocean from here. 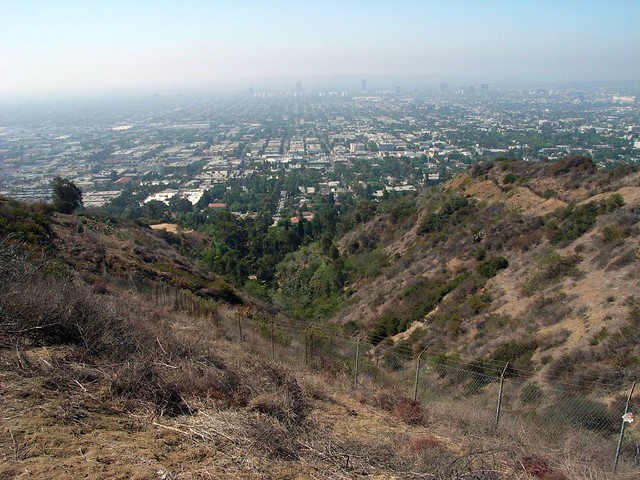 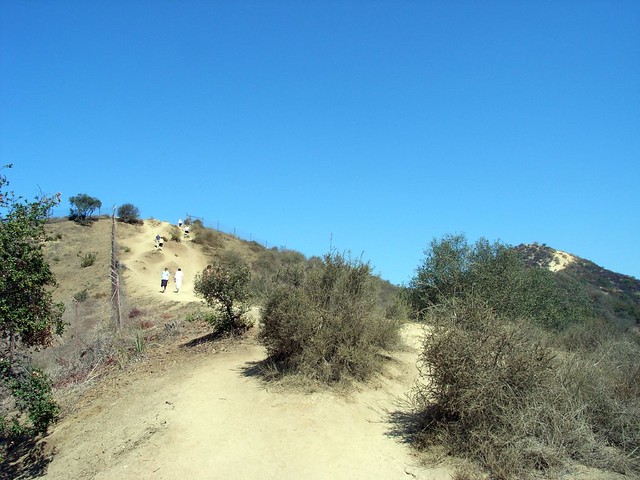 This western route has two strenuous ascents – the first one switchbacks up a steep ridge near the park’s western border and levels off at a small plateau before making an even more steep ascent to yet another ridge. Keep an eye out for good views, watch your footing, and you might see some interesting stickers on a small mailbox / summit post. 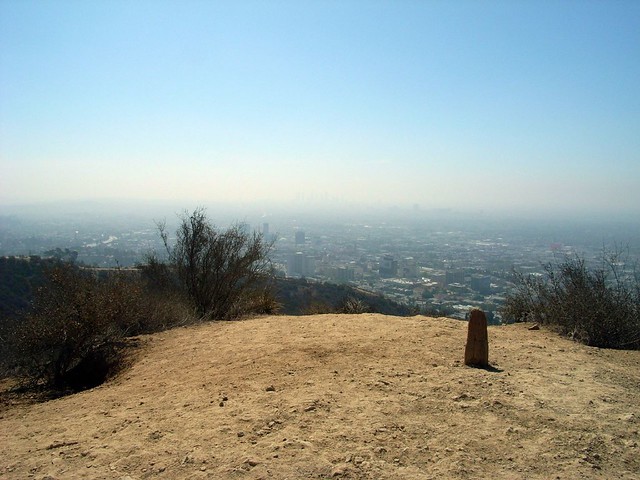 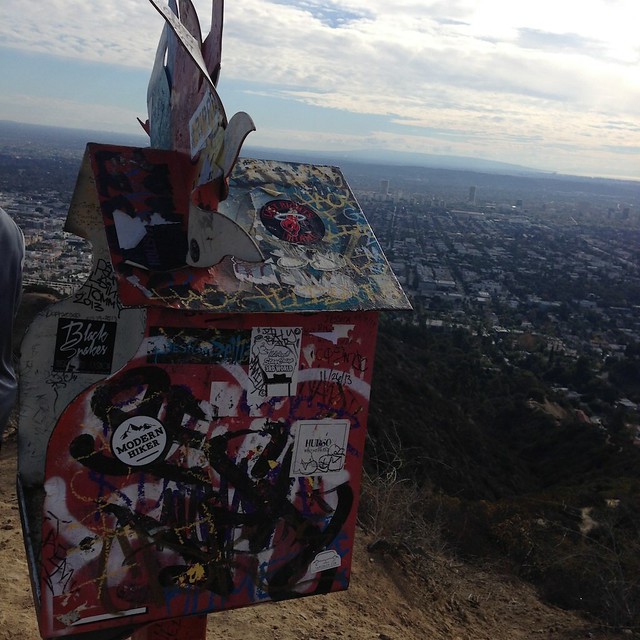 There is one potentially dicey area of trail just beyond the second tough incline – it’s a very short but very steep decline on a rough, sandy section of trail that’s easy to slip on if you don’t have good traction shoes. For some reason, people seem very hesitant to use their hands on this section of trail – but trust me, it makes the descent MUCH easier. There are a lot of hikers at Runyon who are probably not used to hiking wilderness trails – and may care a bit too much about getting dirt on their outfits. If this descent looks too steep for you, just get on your butt and slide down.

After the steep descent, you’ll hike beneath some power lines and next to a large mansion.

Previously, a fire road went next to the mansion and looped around the northern section of the park, but in 2013 the landowner fenced off the property along the long-abandoned house, and now hikers are diverted along a circuitous wooden staircase. 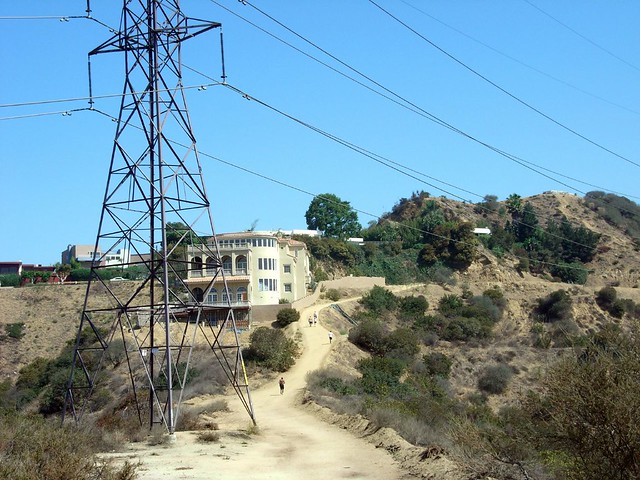 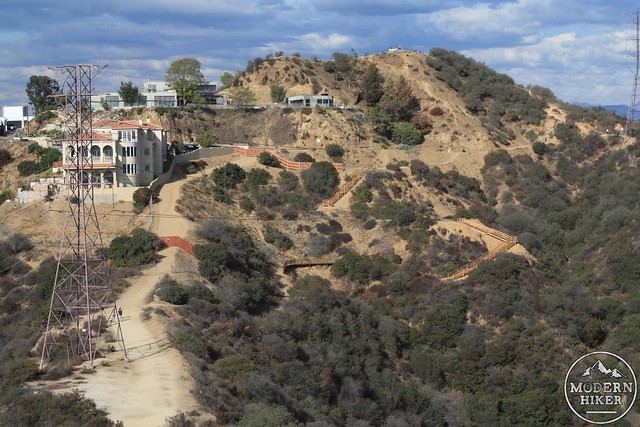 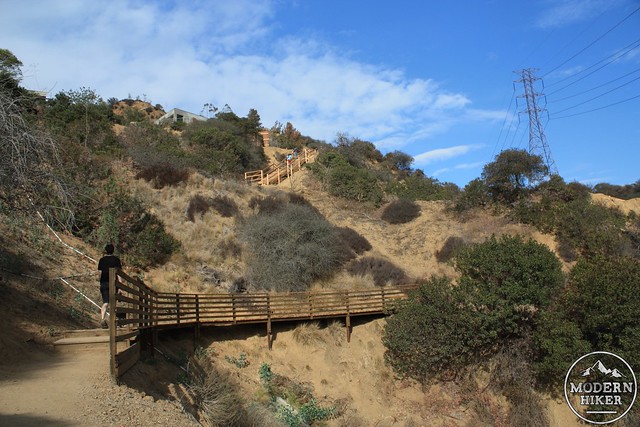 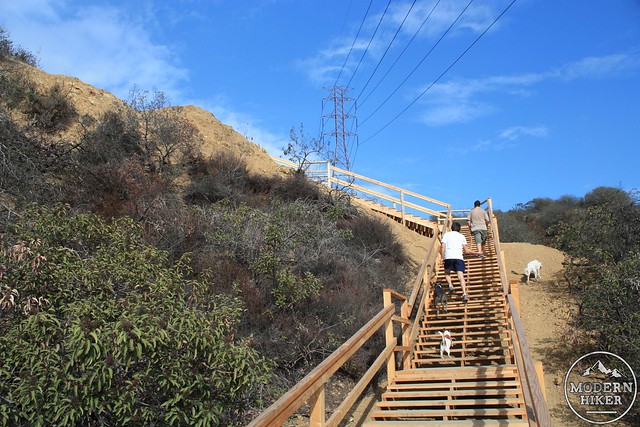 The signage the landowner put near the northern section of the diversion is pretty laughable – it’s clearly just a JPEG they downloaded from the internet, blew up at a Kinkos, and posted on a DWP post to make it look official. Lawsuits have already been filed to re-open the fire road to hikers, but it will likely be awhile before anything is resolved here. 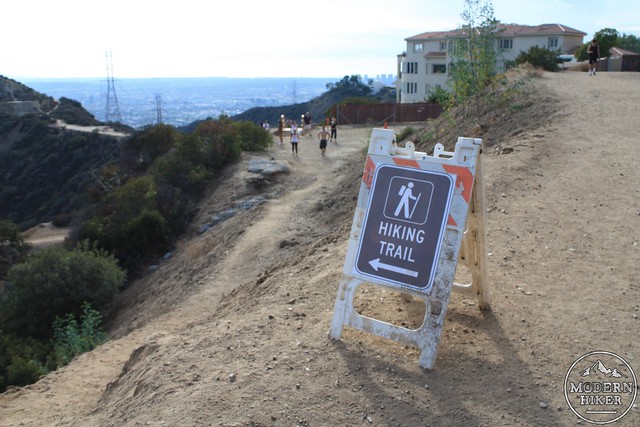 Once you get to the north end of the park near Mullholland Drive, turn around and double back. You can choose to take a dirt / paved road down the center of the park or leave the road for a trail on the park’s eastern end. The ridge on the eastern side of the park is less challenging on the descent than the western ridge – and has a staircase built into some portions of it. There’s a bench on the point just before the descent begins – and it’s a great place for views of the city – especially at sunset. 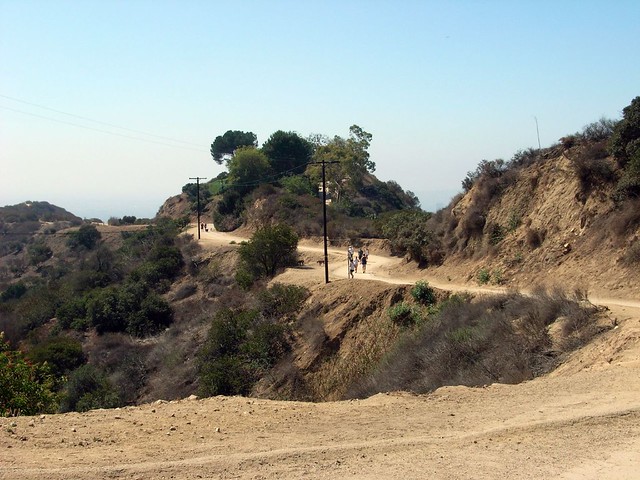 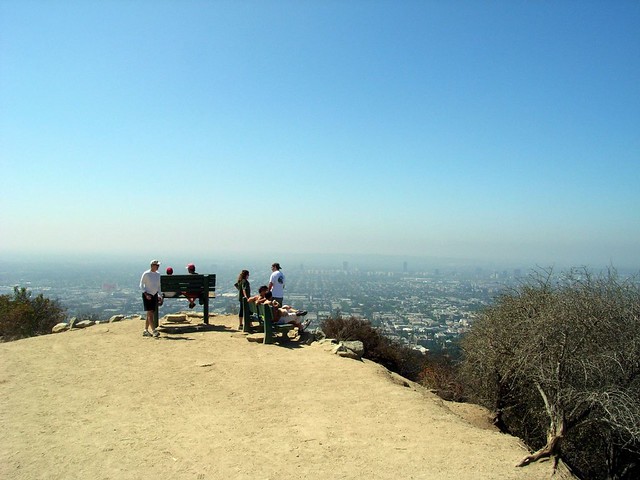 As you descend the eastern stairs, keep an eye out for remnants of the old Outpost Sign – a 30-foot high red neon sign that once stood on the hill to advertise a housing development, rivaling that of the nearby Hollywoodland development. When it was built in 1927, it was one of the largest neon signs in the world … but its showiness was ultimately its undoing during World War II, when L.A. turned off its lights and blackened windows to make it more difficult for Japanese bombers to find targets in the city.

Today there’s not much left beyond some twisted metal, but the history of the area is fascinating nonetheless. 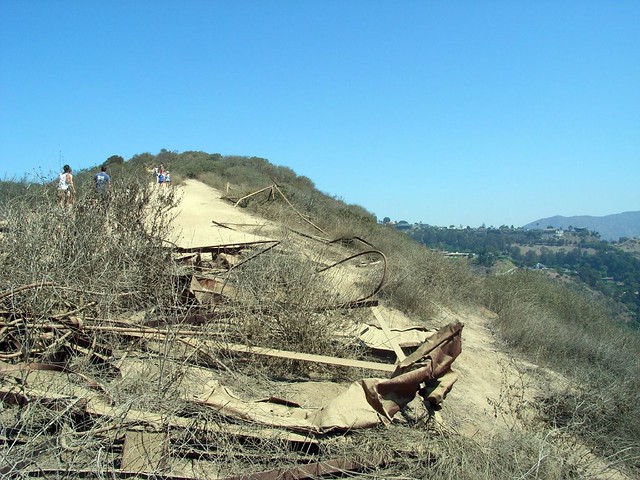 Continue the hike through the old tennis courts and foundations of the area’s former athletic and residential buildings. After you pass through the gate that marks the end of Runyon Canyon’s off-leash area, take a right hand turn to head back to the Vista entrance.

Paved and unpaved fire road, and clearly marked footpaths. The trails are well-maintained and in mostly good shape, which is surprising for the amount of traffic they get. Some of the ridgeline trails are eroded and may be slippery and steep. Exercise caution.

From the south, there are entrances on Fuller Avenue and Vista Street, north of Franklin. Parking close to the Canyon entrance is all permitted residential zones - and many areas don't allow parking at all, so you'll likely have to add a small sidewalk trek to your distance. The Canyon's north entrance is at Mulholland Drive and Runyon Canyon Road, just west of the 101. Transit accessible via Metro bus 217 or the Red Line subway with a bit of a walk.

Just did this hike with lots of others during Covid. Everyone respectful and masked. Perfect hike for all types, only a little challenge at one if the high points, but just sit on your butt and slide if you feel safer! Thanks for your excellent, on-point article!

Thank you so much for such great information. Recovering from a strained knee and wanted to know what I'd be getting myself into.

I love your website! Thank you! And this is *not* and easy hike. Please change the category to moderate, intermediate, etc. I have friends that are new to hiking and this was too hard for them. An easy hike would be Fryman for example. Keep up the great work!

Is there a curfew as far as how late you can go. I prefer to go walking two hours before sunset and like to finish right around when it gets dark outside. It is the perfect time without all those sunrays frying my skin.

Actually, dogs are allowed off leash in the park.

If you want seclusion in Runyon all you have to do is go to the big house, go through the gates and walk down the road. If you look down there is another path that will take you out to the same vantage point as Runyon only not as high. Great spot for pictures and watching the sunset. You can also enter at the gate on Nichols Canyon, can't miss the dirt parking area. :) Enjoy! I really don't call ponytail, cutoffs, tank top, & sneakers making a fashion statement. You are correct this is L.A., the one city in the USA that I can dress any way I want and not think twice about it. By the way the Nichols Canyon gate will allow you to access all of Runyon Canyon as well. Have fun!

My soon-to-be-updated list of my favorite hikes in L.A. would be a good place to start ... beyond that, there are more than 100 hikes in and around L.A. on this site :)

What other hikes can you recommend besides Runyon in the LA/Long Beach/Irvine area? I just did the Inca Trail hike so perhaps looking for a bit more of a challenge than Runyon. ;)

I live near Runyon and go there several times a week. It's a great workout and very convenient to my home. I think your stereotyping of the people who go there is a bit overblown. If you go on a weekday afternoon, you will see maybe a dozen people in the whole place, and they are just regular folks. I don't think anyone is claiming it's a rustic wilderness hike. It's an urban park for goodness sakes. And if you go at sunset, you will get a spectacular view of the lights of the city that I don't think you'll get in the wilderness.

Hi Casey. Love your site. have discovered some great hikes here!!! trying to post in the runyon canyon discussion, but captcha not working for me for some reason. I was going to post this: "hey I think some of these comments are a bit too harsh on Runyon Canyon. I love this place. I love to hike, but don't always - in fact rarely - have time to take half a day and go for a more challenging hike. Enter Runyon. Its close by, it gives you a great workout with fantastic views of the city and you always feel better for having done it. You can often catch some great snippets of conversation as you pass other hikers, (or in my case, when they pass me). Runyon looks different at different times of day. Try timing it so you're coming down at dusk, just as the lights of the city are turning on. LA looks magical and full of promise."