This 6.1 mile out-and-back travels over one ridge of the front range of the San Gabriel Mountains to get to Mount Lowe, part of old, sprawling land of the nearby Echo Mountain Resort. Mount Lowe was planned as the site of a grand alpine tavern and aerial tramway for the resort, but geography and money woes kept it from being fully developed – although there are still remnants of the resort on the summit, including some viewing tubes that can help identify nearby peaks. This trail’s multiple ascents and descents in both directions make it a decent workout trail but the mostly moderate grade, history, and views make it an attractive option for just about anyone. And if you’re feeling extra feisty, there are plenty of nearby peaks to add to the journey!

The collection of mountains near San Gabriel Peak is one of my favorites in the San Gabriels – it’s close enough to the city to accomplish as a day-hike, approachable enough for moderately experienced hikers to enjoy, and far enough away from the crowds of nearby Mount Wilson and Echo Mountain to almost guarantee long stretches of hiking solitude. There’s turn-of-the-century history, Cold War history, and several nearby peaks to add to the hike should you feel some extra energy on the return trip.

The Trail begins on a slightly-eroded hillside and makes a steep, switchbacking ascent up some loose talus. There are a few very small patches of poison oak near this part of the trail, so just keep your eyes open for it. 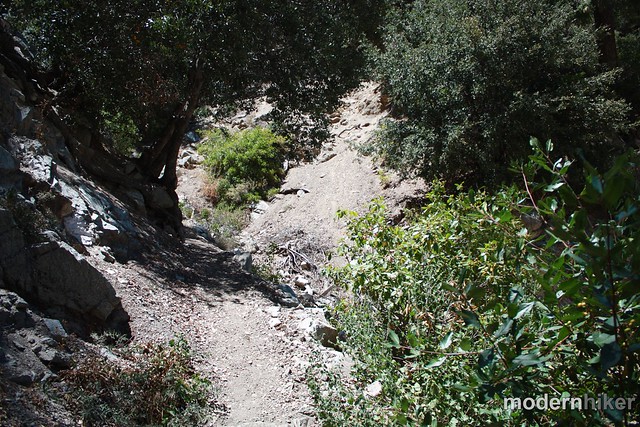 After a few switchbacks in the first 0.2 miles, the trail makes its way into the spotty shade of the pines and manzanita shade on the ridge’s north slope. For the next 1.1 miles, the trail winds its way through this partially shaded region. You’ll occasionally get some very beautiful breaks in the tree cover, revealing long views of Strawberry Peak and Mount Lawlor to the north, Mount Baldy and the high San Gabriels to the east, and the more immediately San Gabriel Peak just to your southeast. 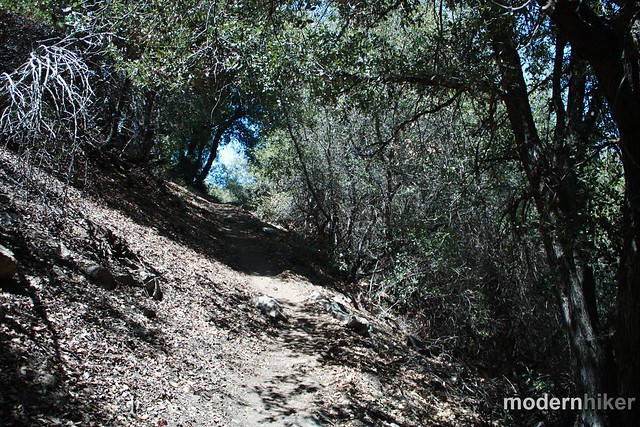 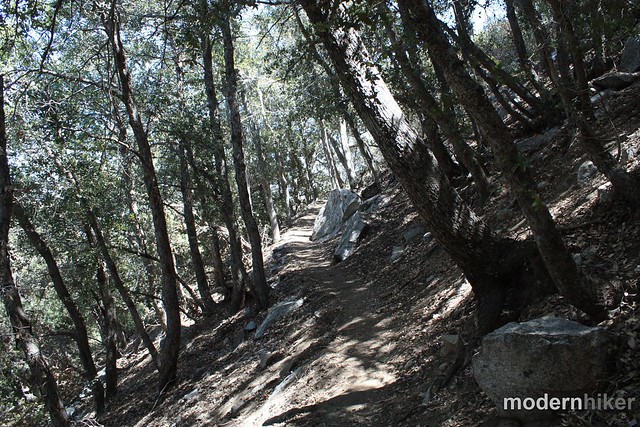 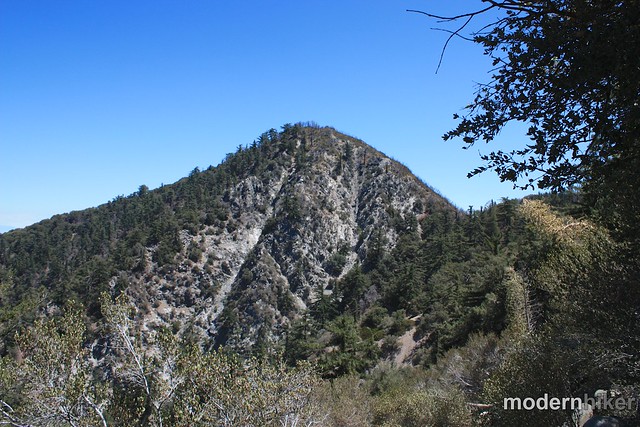 At the 1.1 mile mark, the trail ends and joins Mount Disappointment Road (Forest Road 12W24) and continues south until about the 1.3 mile mark. 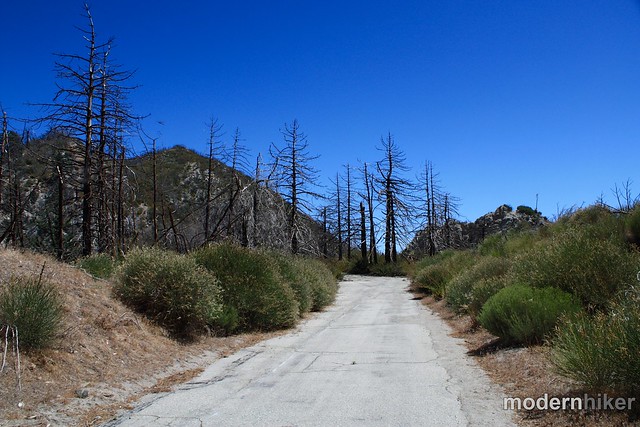 From here, there’s a short ridge along the saddle between Mount Disappointment to your west and San Gabriel Peak to your east. If you feel like taking the hike up to Mount Disappointment, it’s a very short trip up to the peak’s collection of radio and military communications towers. There’s not much to see up there, but if you’re in the mood for peakbagging, this is an easy one to snag.

The mountain’s unusual name has an interesting history – when the San Gabriels were first being mapped by the USGS in 1894, surveyors viewing the ridge from the San Fernando Valley believed Disappointment to be the highest peak in the region. When they actually reached the peak, however, they found it to be 167 feet shorter than San Gabriel Peak, so they named it Mount Disappointment. 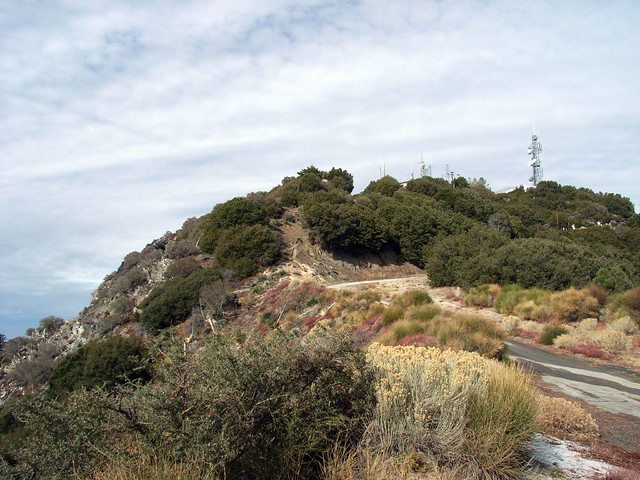 More interestingly, if you turn to the left at this ridge (heading east), you will pass the foundations of some buildings. This is the site of one of the 17 locations of L.A.’s Cold War-era Nike-Ajax Missile Defense System. Not much remains of this site, but it’s a cool part of the region’s history that many people don’t know much about. 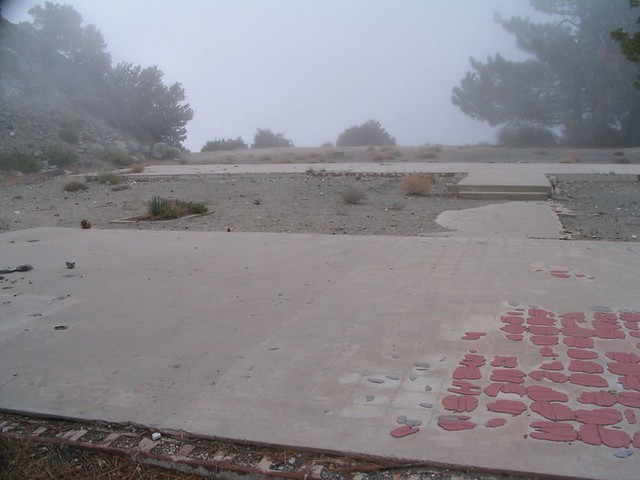 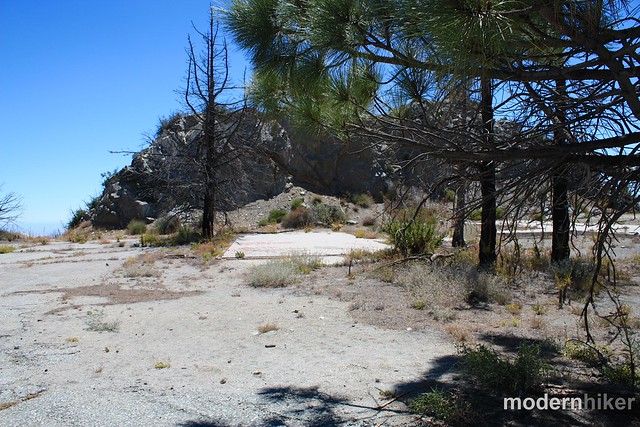 Near the eastern edge of the old driveway to the Nike-Ajax site, there’s a small trail that drops down to a thin ridge saddle between Disappointment and San Gabriel Peak. It’s marked by a small wooden stake. 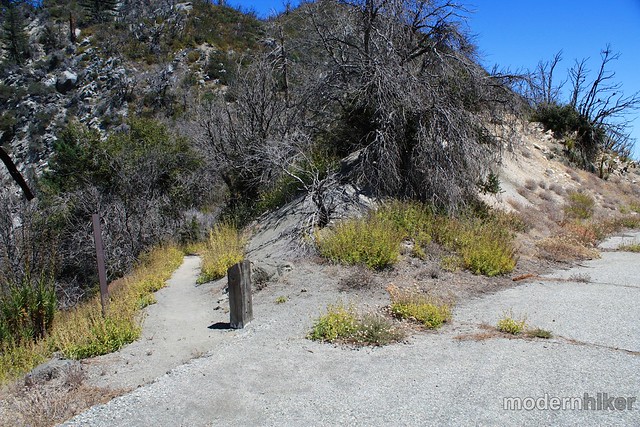 Hike on this trail for a very short distance until you see a turn-off on the right hand side (continuing straight will take you up to San Gabriel Peak). This trail makes a quick descent south and heads toward the flat-looking ridge summit of Mount Markham and Mount Lowe (center in the picture below). The flat fire road visible on the mountain is the old Mount Lowe Motorway, a fire access road built in 1963. 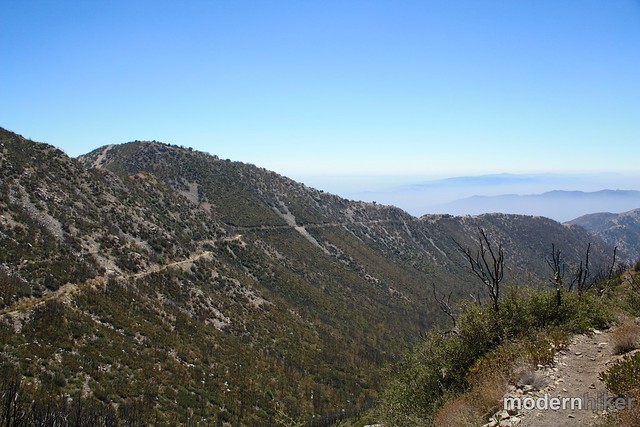 This region of the San Gabriels was badly burned in the 2009 Station Fire, and although it’s making a nice comeback the trail could benefit from a little bit of love in a few places. Early post-fire colonizers have swarmed over the area taking advantage of the new lack of tree cover, and the trail is a bit eroded in a few spots. Nothing to be terribly concerned with, safety-wise, but you may need to watch your step in a few spots.

Even with the fire damage, the views are still very nice and it’s a fun trail to hike on as it drops just under 400 feet in 0.6 miles. 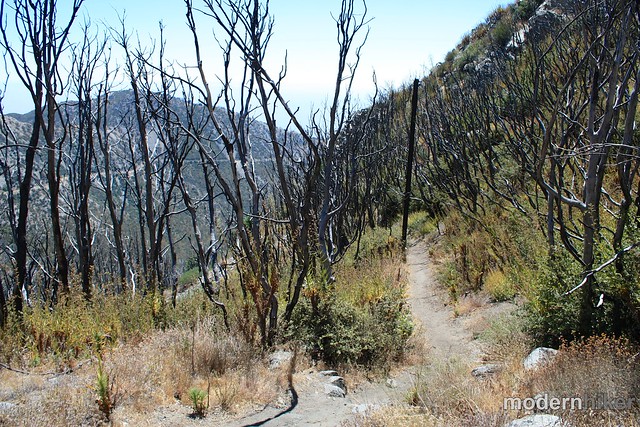 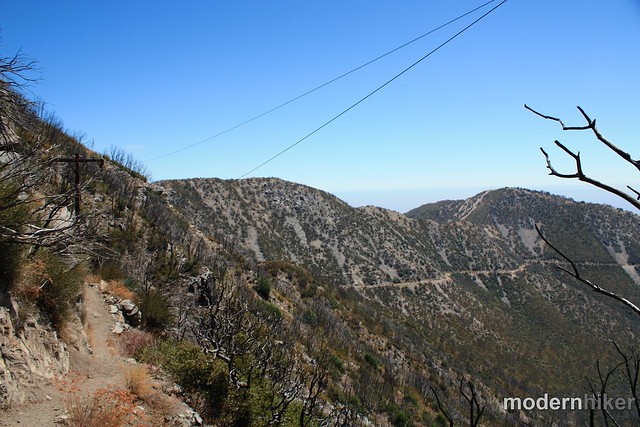 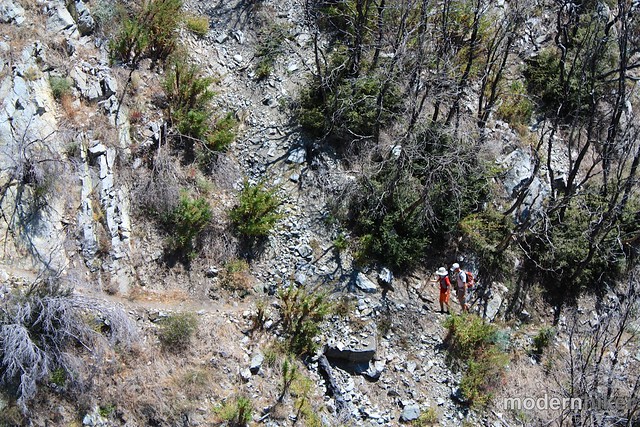 At about the 2 mile mark, the trail meets up with the Mount Lowe Motorway. Cross the dirt road and look for a smaller single-track trail that rises parallel to the Motorway, marked by an old metal sign. 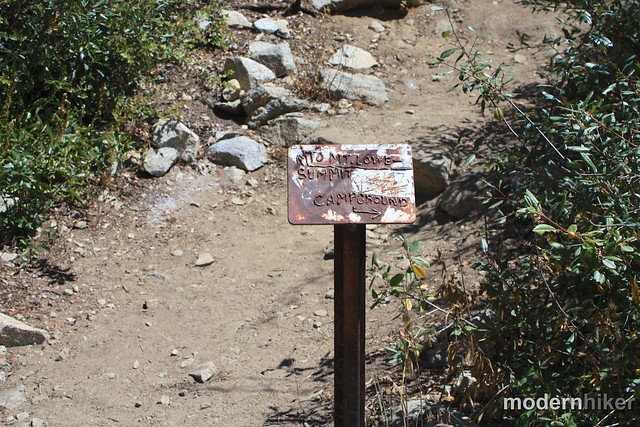 This section of trail stays fairly level for about 0.5 miles as the Motorway descends below and the steep, rocky slope of Mount Markham rises to your left. 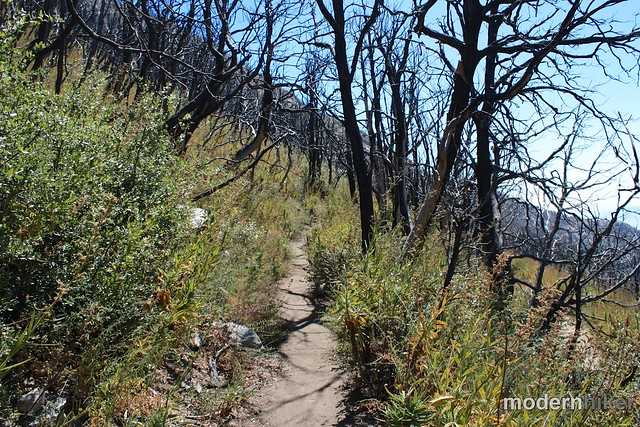 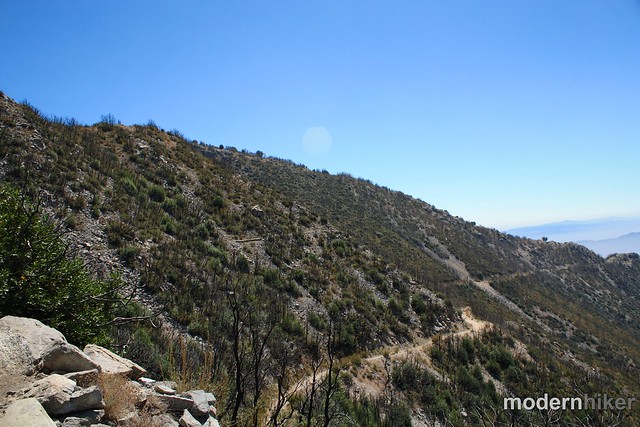 At about the 2.5 mile mark, the trail makes a small climb up to the saddle between Mounts Lowe and Markham. From here, you can make a sharp turn to the left to make an attempt at Mount Marhkam along an unmaintained ridge trail. This trail is significantly more challenging than what you’ve been on so far – there are some stretches where the ridge is only a few feet across and some moderately rough class 2 bouldering – but it’s a fun add-on for more experienced hikers.

For now, though, continue on the established trail as it starts to climb up the slope of Mount Lowe.

At about the 2.8 mile mark, the trail splits at a three-way junction. There’s a metal sign that will point you in the direction of Mount Lowe or, if you went back the way you came, to Mount Wilson. There are some good views of the latter mountain from this vantage point – so soak them in, then keep climbing upward. 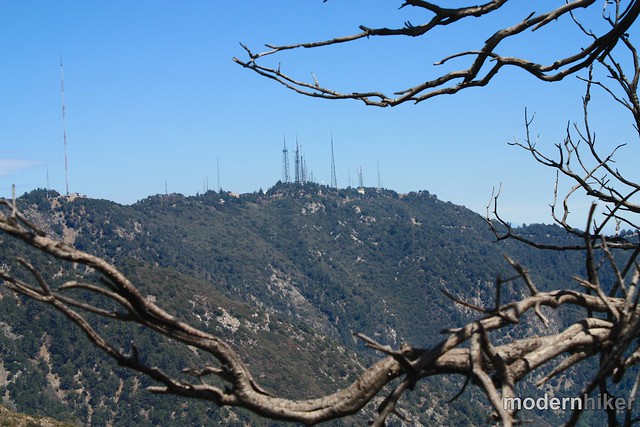 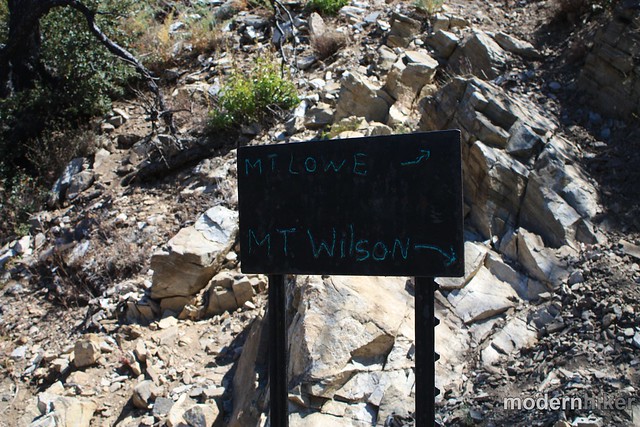 This trail loops around the north slope of Mount Lowe for the next tenth of a mile, providing some truly outstanding views of the front range as you climb. As you’re gazing out at all the mountains, though, be sure to keep an eye out for some interesting stuff on the ground in front of you, too … 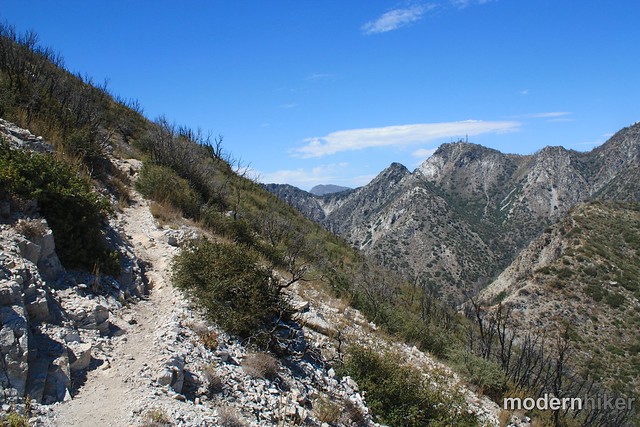 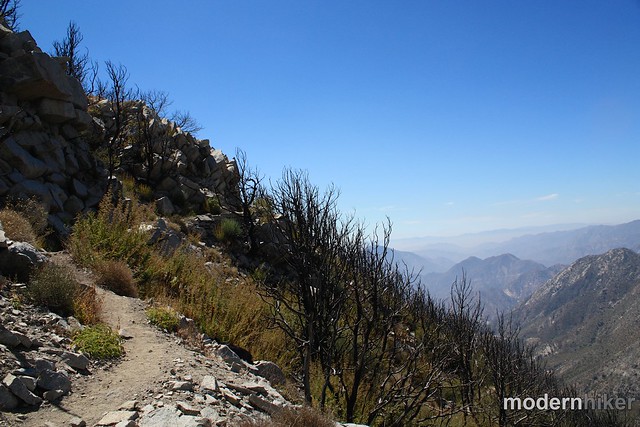 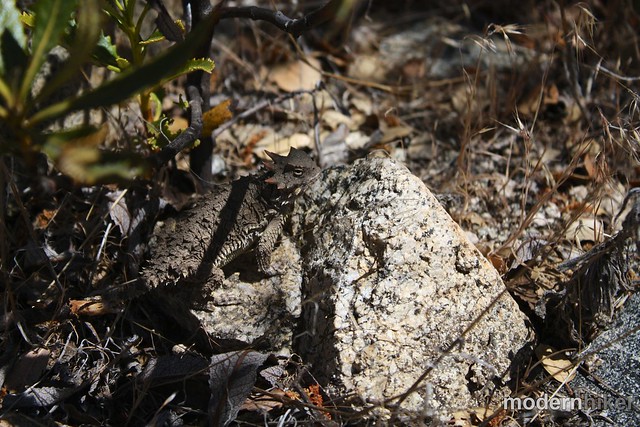 Look for a trail junction near the 2.9 mile mark, and make a sharp left for a short final ascent up to the summit of Mount Lowe.

In his original plans for the San Gabriels, Professor Lowe planned to extend the Mount Lowe Railway from nearby Echo Mountain all the way to the summit of this peak, where he planned to build another large hotel and an aerial tramway to San Gabriel Peak … where he also planned to build an observatory and research institute (can’t say the guy wasn’t ambitious!). Unfortunately, he was plagued by money woes and the railway only made it to the Alpine Tavern, about 1100 feet below and 2 and a half miles away.

From the Tavern (now gone), visitors could hike or take a horseback ride up to Mount Lowe, where a large flag flew and viewing tubes allowed people to easily spot and identify other local peaks. When the railroad closed in 1937, they left the tubes, flagpole, and a hitching post for horses on the summit – which are all still there today. 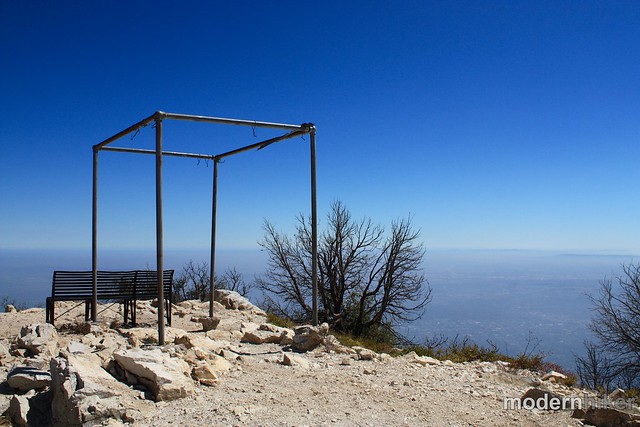 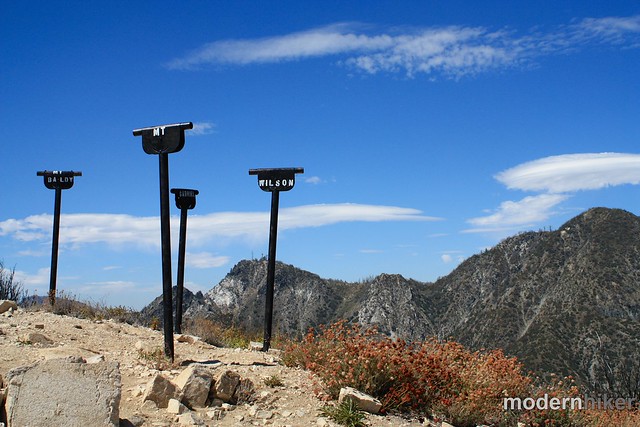 The views from the summit are still awe-inspiring, especially on clear winter days or after a rain. But even through some summer haze, I love coming up here to gaze at the Great Sprawl of Los Angeles – its millions each chasing their own dreams just like Professor Lowe did more than a hundred years ago. 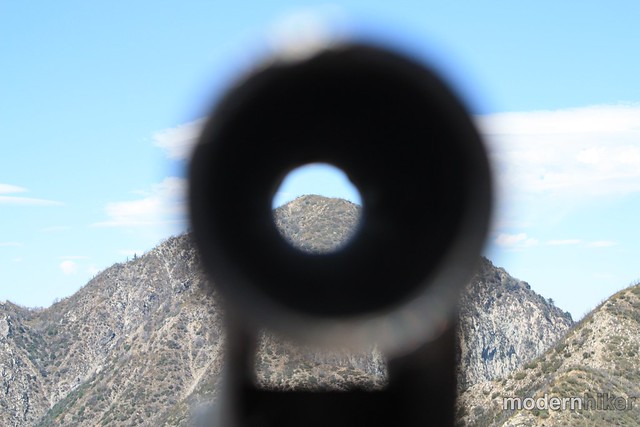 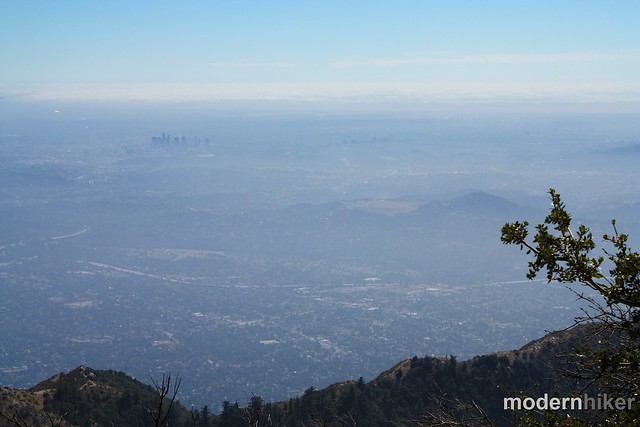 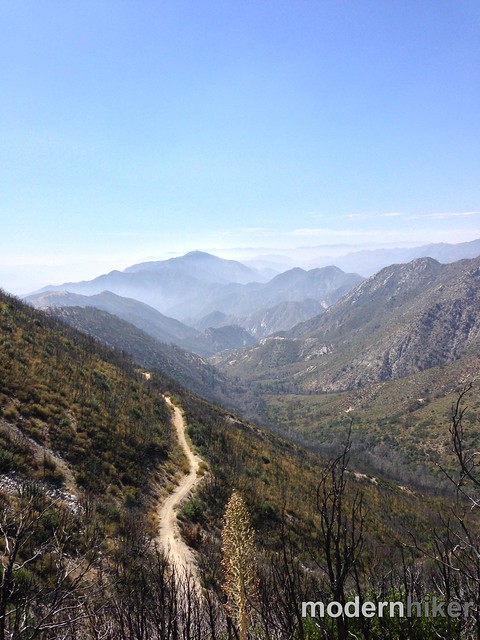 Good. The trails here are well established and most of them are signed, but the area is still recovering from the Station Fire (as of 2013) and some of the trails are a bit eroded or overgrown.

The first-come, first-served Mount Lowe Campground is nearby, to the southwest of Mount Lowe itself on the site of the former Ye Alpine Tavern. The campground has five hike-in campsites and a hitching post for horses.

From the 210 in La Canada Flintridge, head north into the Angeles National Forest on CA-2 for 13.9 miles. Take a right onto Mount Wilson-Red Box Road at Red Box and continue driving for just over 200 feet. Take a sharp right turn onto a rough but paved road. This road is gated shortly after you turn onto it, and there’s a small dirt area to park. Display your Adventure Pass.

Did part of this trail today starting from Mount Disappointment Road. We did not see any marker for the trail you have on this page so we stayed on the main fire road. It was definitely the long way! However, we turned back half way through San Gabriel Peak Trail (before reaching Mount Lowe Road) because there were a lot of washed out areas on the way... It did not feel safe enough to continue! We clocked a total of 8 miles in & back the same way. It was Beautiful :) If we had made it to Mount Lowe, it probably would've been a 10 mile hike. Thanks!!

Hey Casey and readers, I was up here today, and there are some things to watch out for due to the recent storms. There are trees down and blocking the fire road at the saddle between Disappointment and San Gabriel Peak; you have to do some off-roading, but it is passable. On the trail that goes down San Gabriel Peak to Mt. Lowe Road, there have been a number of small slides that have made the footing even trickier. Around 1/3 mile down, I came upon a very steep section that was nothing but very loose dirt with a severe drop-off to the right. The trail just kept sliding out from under me when I attempted to proceed and I decided to turn around. I would describe myself as risk adverse, so more advanced hikers might have no issue here at all.

Great write up, I really enjoyed all the pictures!