A short stint on the Pacific Crest Trail to a mountain with a lot of history. A cool, shaded, north-face trail takes you to the summit’s old Nike Missile radio base. Unfortunately, the largest wildfire in modern Los Angeles County history has left most of this area in disrepair and inaccessible to hikers.

IMPORTANT: Please note that the roads leading to this trailhead are still closed due to damage from the 2009 Station Fire and the trails themselves are in very poor condition. We strongly recommend you choose another trail to hike until repair crews have had their chance to maintain this trail. 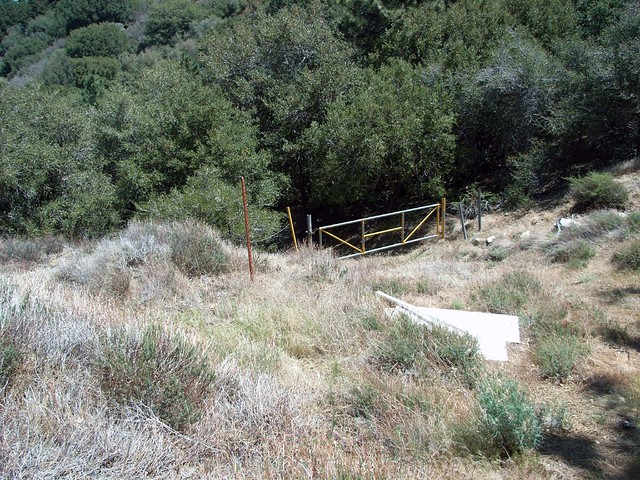 The trail begins just past a small metal gate at the northeast corner of a dirt parking area on the north side of the road and hooks up with the Pacific Crest Trail right away. The pine-lined path was shaded and cool, and starts off nice and level. 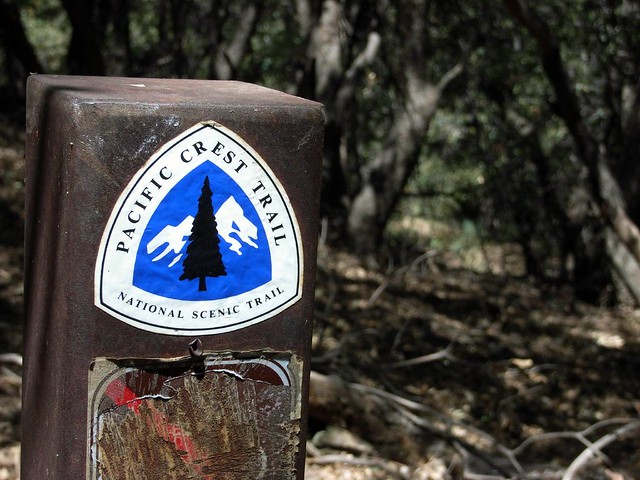 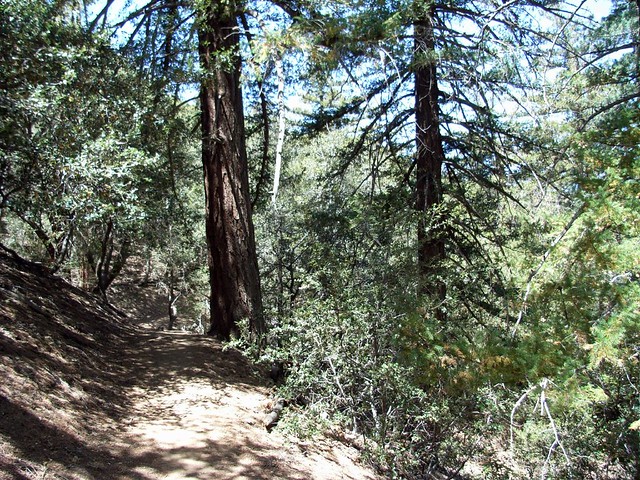 The PCT is well cared-for and generally clear of debris. There are, however, several nice fallen trees on the sides of the trail. 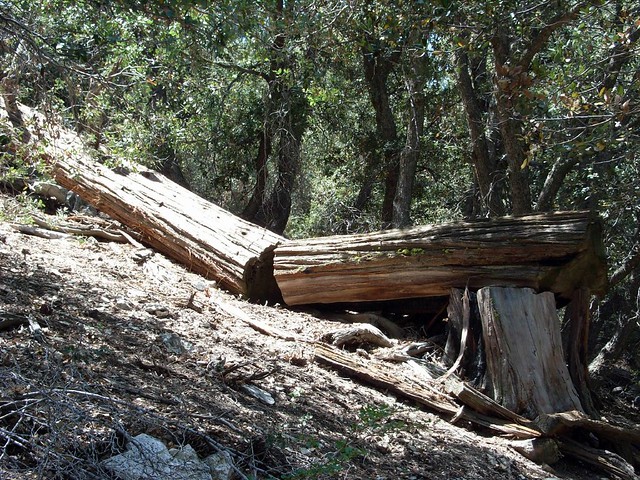 Eventually the trail does start to pick up a bit of elevation but it’s nothing too difficult. It is nice, however, to get out of the tree cover for a little while and see the stark transition the landscape makes – from desert to chaparral to pine. No matter how many times I see that, I’m always awestruck. 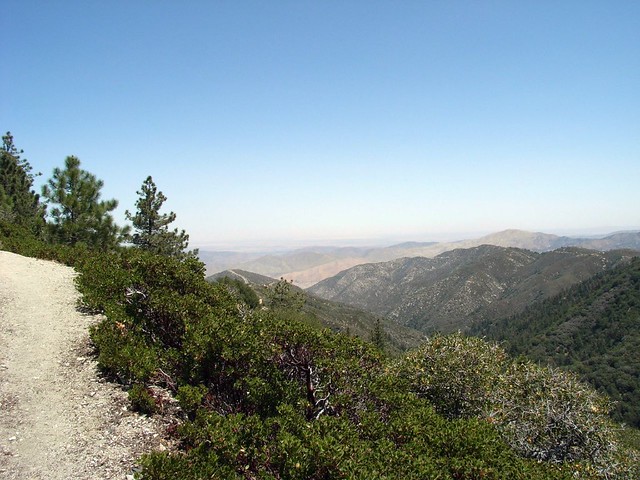 The trail was remote but I still passed a few other hikers on the way in. One was a new family carting off their baby daughter (good to get started early) and another was a group of pole-hiking older folks, who looked like they were having a great time out in the woods.

As the trail continues up the north side of Mount Gleason, it intersects what is either an old dirt road or the former grade of the PCT. 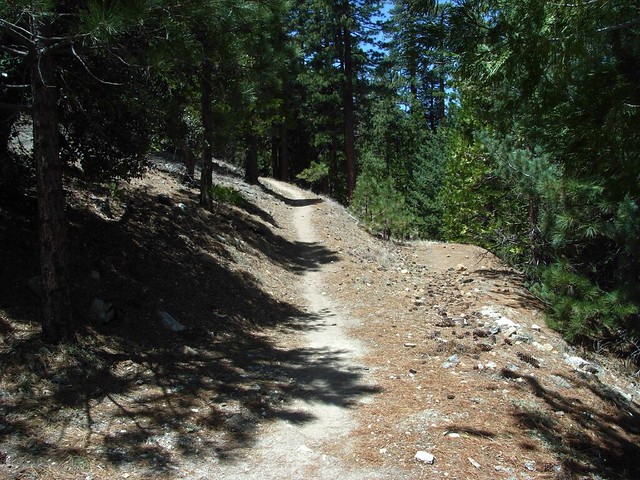 The book I’d read about this trail said it was possible to take this old road down into the canyon below, where the remnants of several major gold mines still stood. I followed the grade down for a short while, but eventually it got overgrown and I lost the path. I suppose it may be possible to just scramble down into the canyon, but as I didn’t have a great topo map with me, I just kept climbing up toward the summit instead.

There is an old gold mine in the canyon below this trail, but I’ve been informed that the land is privately held and no permission is given for hikers to enter.

As you get closer to the ridge, the trees start thinning out into mini-meadows, which are absolutely beautiful to hike through when the wind is tossing the grasses around. 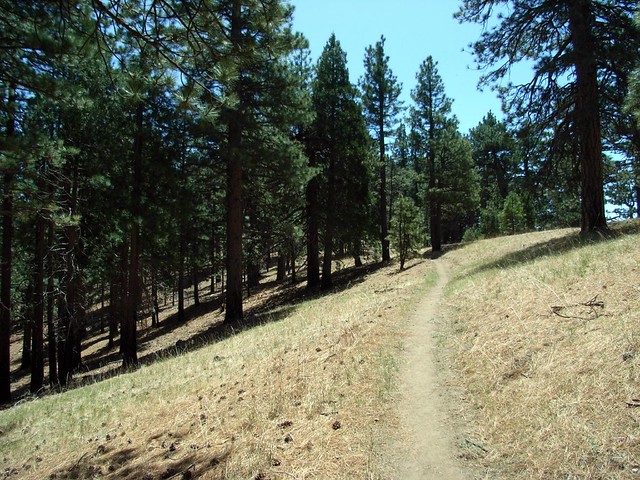 The summit was surreal.

The former site of a Nike missile radio base, a large chunk of the natural summit had been leveled for the buildings, which have since been removed. The result is a seemingly out-of-place plateau surrounded by the more traditional-feeling forest. 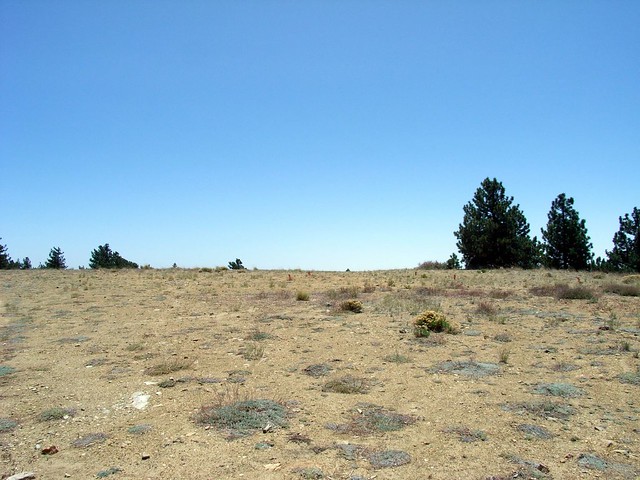 Even though that weirded me out a little bit, by stepping south to the ridge I got a beautiful sweeping vista of Mount Lukens, Fox Mountain, and Condor Peak – their lower elevations still blanketed by our marine layer. 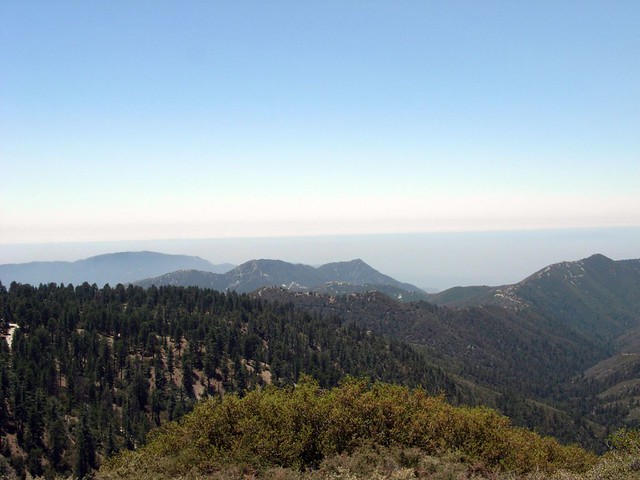 And just a tad north of the flattened land was an old, crumbling cabin or some leftover army building. If you hike here in the spring, you may also be treated to a nice bloom of lupines nearby. 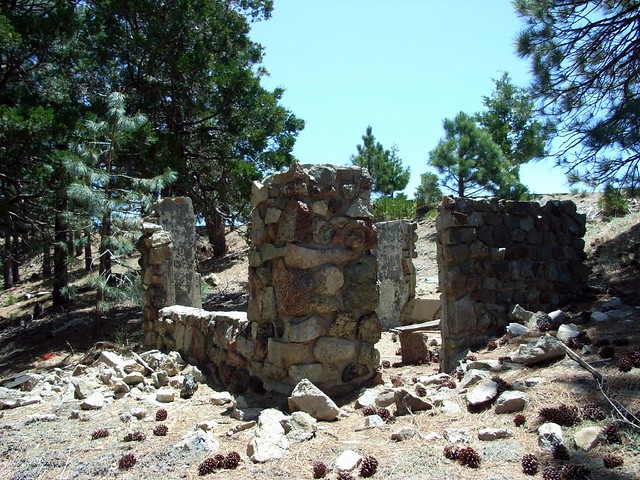 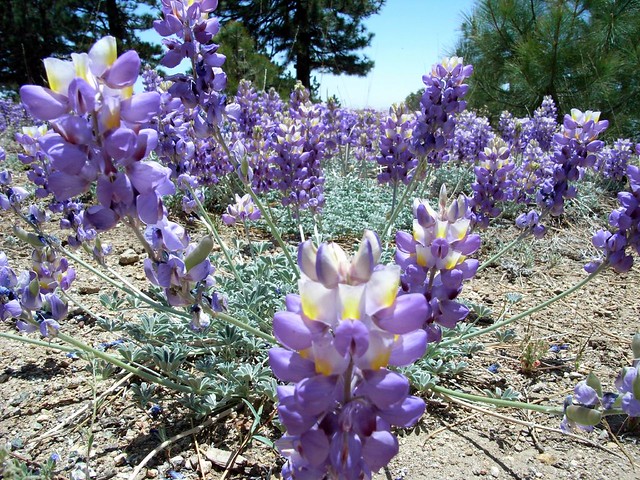 After a short walk down a long disused paved road, the trail meets back up with the paved / dirt road I used to get to the trailhead, right by a more intact abandoned radio tower.

The tower is pretty much stripped bare and surrounded by a nasty barbed wire fence, so you won’t be able to do much exploring … but if you walk around the north side of the complex, you can find some nice boulders to sit on while you eat lunch … and take in some nice views of Strawberry Peak and the backs of the front range while you’re at it. 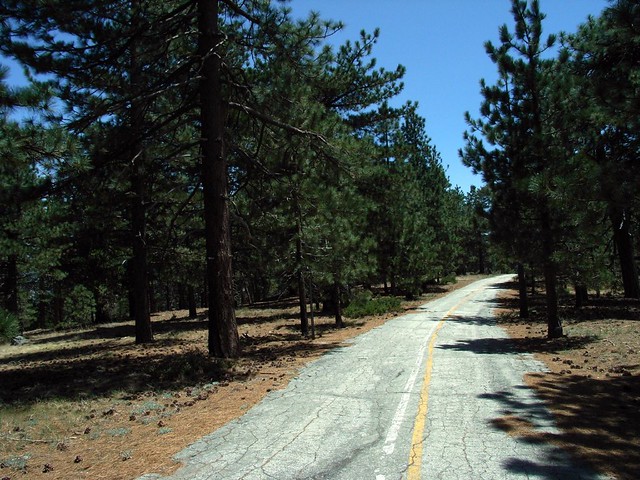 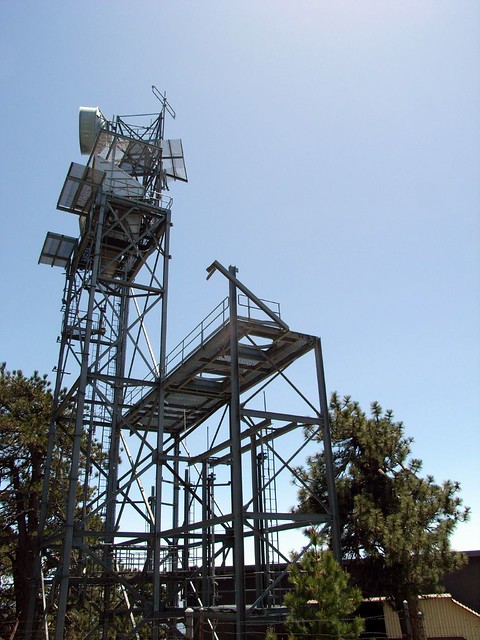 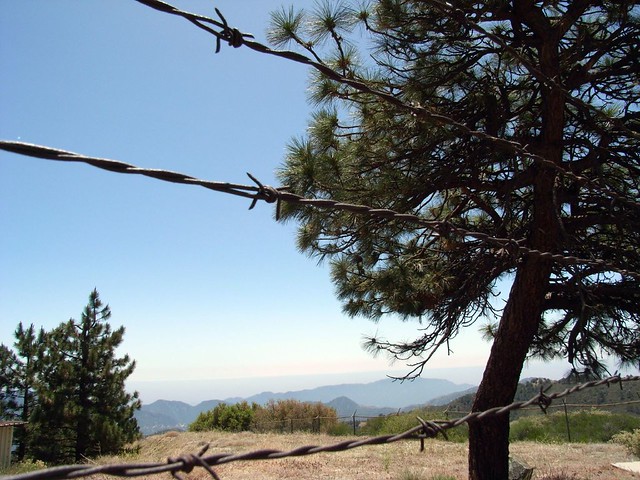 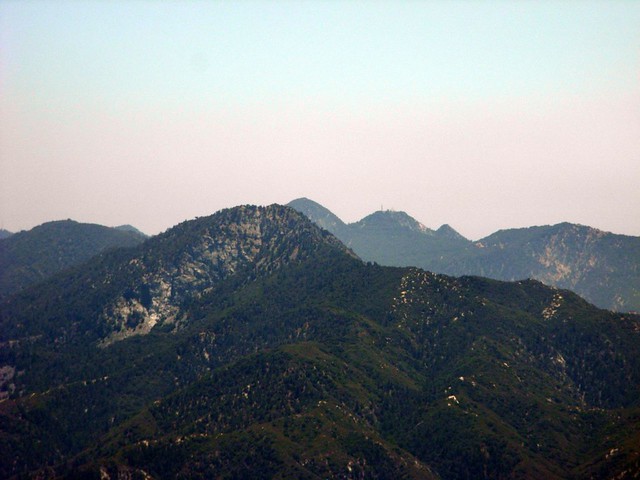 When you’re done, follow the abandoned road back to the trailhead. 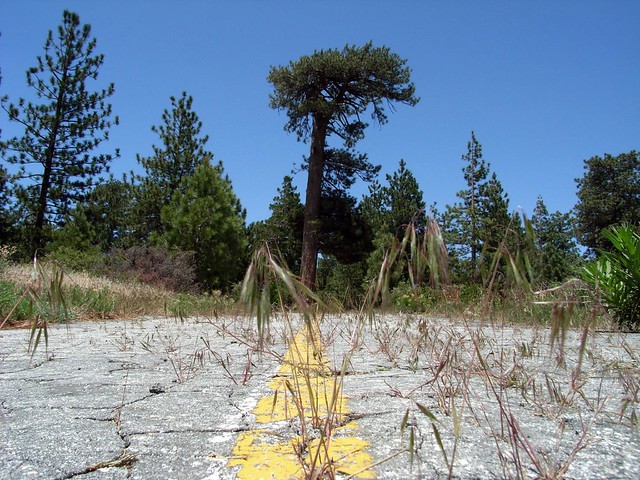 Excellent while you're on the Pacific Crest Trail, and very good when you're on old jeep roads climbing to the top of Mount Gleason. NOTE: This area was badly burned in the 2009 Station Fire. Trail conditions may differ from this write up due to erosion, fire damage, or repair work.

Lightning Point, Mount Gleason, and Deer Spring Campground are all within spitting distance of this route - however, all campsites remain closed due to the Station Fire. It remains unknown if and when any of those campsites will be repaired and reopened.

At Mill Creek Summit Picnic Area on the Angeles Forest Highway, turn north onto Mount Gleason Road. Continue past the first intersection with the PCT (unless you feel like adding 8 miles RT to the hike), and bear left onto a dirt road when the road forks. The dirt road returns to pavement near the bottom of a saddle, which is where you want to pull off into a parking area. The trail begins in the northeast corner of the lot, behind a gate.

Hiked the PCT from Mill Creek Summit to Mt. Gleason, 21 miles roundtrip. The PCT is in good shape except for a few down trees and some brushy locations. The views, forest, and grade of the trail will make this a pleasant hike if you are up to the mileage. Some of the locations you have to be able to look past the skeleton forest and enjoy the views.

We hiked this trail from Mill Creek Summit to Messenger Flat Campground (11.5 Miles one way).
There we met a ranger that told us this whole area is closed to the public due to the Sand Fire. She was nice about it and let us go on our way back to Mill Creek.
The whole trail is exposed due to the Station fire decimated most of the forest.
The ranger told us they had been prepared to open the road (Mt Gleason Road and Santa Clara divide) to traffic soon when the Sand fire happened, so it's now been delayed.
On our way up we stopped at the Memorial for the two firefighters that lost their lives battling the Station fire and looked at the remains of the Correctional facility that burned down on that fire also.
All total we did 22 miles with about 4000 feet elevation gain. We prepared to carry at least 4 liters of water on a hot day I had a 3 liter and wished I had one more.
The views from the trail are very impressive, specially on a clear day we had.

I went there today. It's still closed.

Yes, the road is closed usually due to the loss of the structures from the station fire. There is no short route any longer. Count on at least 15 to 20 miles total, depending upon the trail you take. Count on very little shade and trees as the station fire wiped everything out and there are very few trees left. The photographs posted are beautiful but the entire area has changed. Dense, short growth brush has overgrown nearly everything but the main trail. The shortcut trails from the road to the PCT are mostly overgrown and impassable. Bring lots of water. Don't hike this in the summer or on a hot day.

I agree that the road is closed. What is the shortest hiking route that you know of? My partner and I would like to get up there but we are unaware of any routes that are less than 20 or so miles. Thanks.

99% sure the road is still closed - I'd call the ranger station to check before you trekked out there.

Hi. I was reading this and was surprised that the hike was listed as only 7.3 miles. Does that mean that the road is now open? Thank you.
Carla