Carlsbad’s Lake Calavera Preserve features wetlands, a lake, coastal sage-scrub, and volcanic Mt. Calavera. This oasis tucked into the suburban sprawl of North County offers satisfying diversity for a hike this brief, as well as a few adventurous moments and surprises on the trail. This 3.2 mile lollipop loop visits the most interesting and attractive features of the preserve. 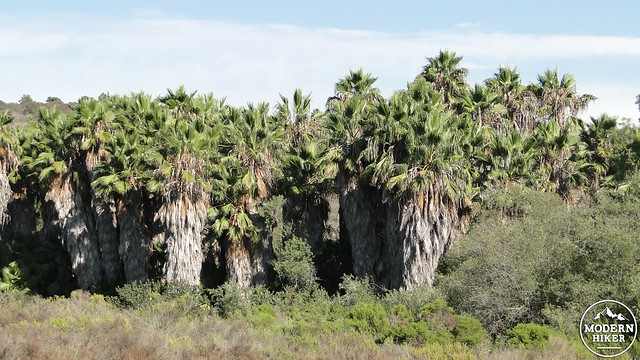 The city of Carlsbad has recently done a lot of work to improve the preserve’s trail network and natural habitats. In the past, local residents often used the park’s lands for off-roading, which led to the creation of a large network of unofficial trails. With the trails came a lot of environmental degradation, and the city recognized that Calavera was getting trashed through overuse. 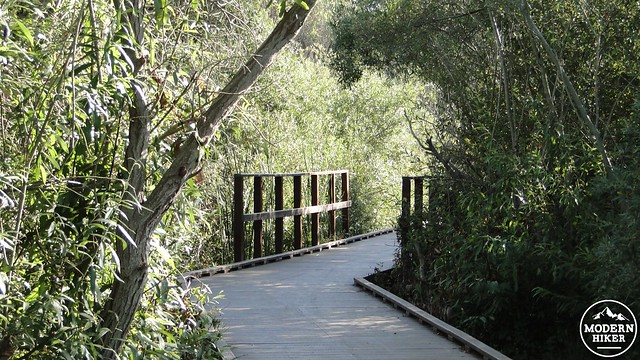 The new boardwalk through the wetlands

Recently, the city has put a lot of work into clarifying the trails to minimize continued use of the unofficial trails and to simplify what was, and still is to a lesser extent, a very confusing trail system. That the trail system is a confusing tangle of interconnecting paths is hardly the city’s fault, and to their credit, city officials, with encouragement and support from Preserve Calavera, have placed a number of signs to help simplify the choices. Additionally, the city installed a new boardwalk over the two marshiest portions of the trail near Oak Riparian Park and at the creek crossing just east of the lake. Finally, the city has cordoned off sections of the park to allow the native vegetation to regenerate to a natural state. Kudos to Carlsbad for recognizing the value of a natural habitat. 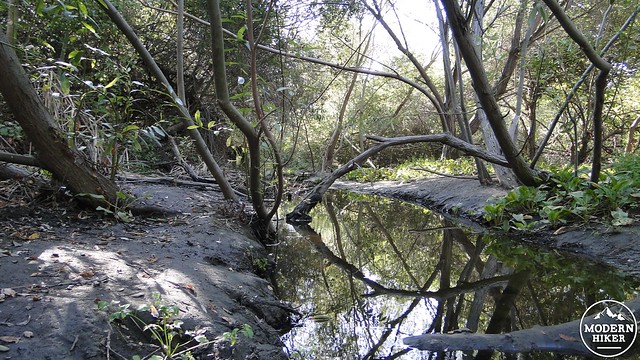 This lollipop hike begins and ends at Oak Riparian Park to follow the boardwalk through a rare patch of wetlands. Prior to the installation of the boardwalk, this stretch of trail was tricky and inconsistent, and hikers were often at risk of getting wet from stepping in the marsh due to the wonky boards holding up the “trail.” This is not the case anymore, as the boardwalk is as smooth as you could hope for. An interpretive sign displays the benefits of wetland habitats, while also pointing out that about 90% of San Diego’s wetlands no longer exist, mainly due to development. Along this section, you’ll see dense riparian vegetation, including willows, mule fat, and yerba mansa, as well as some nice live oaks that combine with the creek to give Oak Riparian park its name. 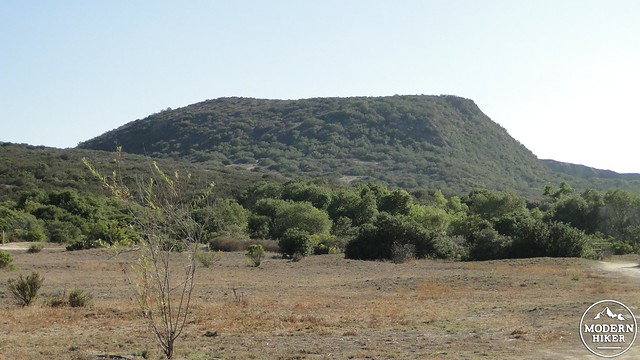 The trail leaves the creek and steps out onto a sunny stretch of sage-scrub as it moves toward the peak. At a junction beneath some power linest, one trail will go hard left, while another trail will go right. Ignore both of those for a trail  that bears gently to the left. 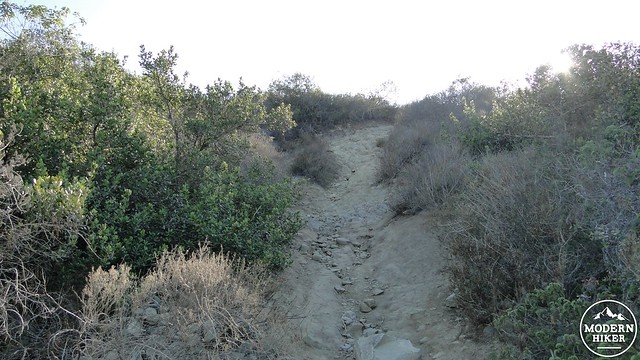 This trail will follow along a broad ridge. Keep going straight along the occasionally rutted paths and ignore the numerous side trails until you find yourself standing at the base of Mt. Calavera.

Mt. Calavera is a geological oddity in that it is an ancient volcanic remnant in an area that features little history of volcanism. Like Sandstone Peak and the Goat Buttes in the Santa Monica Mountains, Mt. Calavera is a basaltic formation that has eroded at a slower rate than its surroundings, leading to something of a craggy plateau shape. Further evidence of its volcanic history is present on the hill’s west side, where a rock quarry has exposed columnar faulting not unlike that found at Devil’s Postpile. 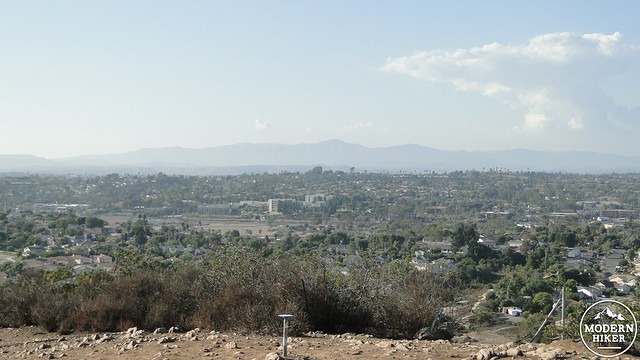 Looking north over Vista toward the Santa Ana Mountains

Feel confident in the fact that the volcano won’t erupt beneath you – it is extinct, and the hill is a plug that actually capped the original volcano. Of the several ways to reach the summit, I picked out what seemed to be the most prominent paths leading directly up the side of the hill. Even so the path was tricky to find and too complicated to give a lot of specific directions. It may take some trial and error unless you’re following the tracks. With some perseverance, you’ll come huffing and puffing up to the broad, flat summit to soak in some pretty good North County views that extend out to include landmarks like Mt. San Gorgonio, Mt. San Jacinto, the Santa Ana Mountains, the Palomar Mountains, and the Cuyamaca Mountains. 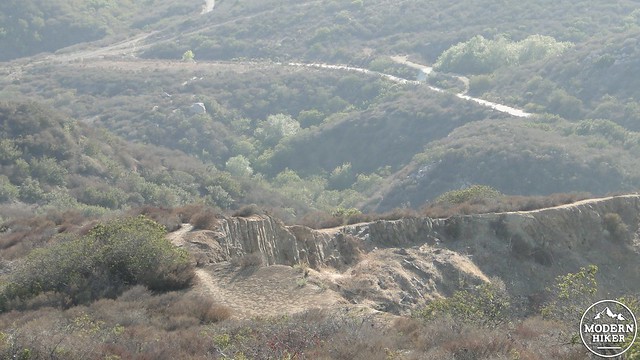 The descent along the rim of the quarry

After enjoying the summit, you’ll encounter a pretty adventurous section for such a short local hike. For those who don’t mind heights and steep drop-offs, head off to the right to find a use trail that descends along the rim of a large gouge cut into the hill by the rock quarry. At times, this trail will hug the edge of the ridge, which will feature a precipitous 100 to 150’ drop on  the right. This is not the route to take children or dogs on. 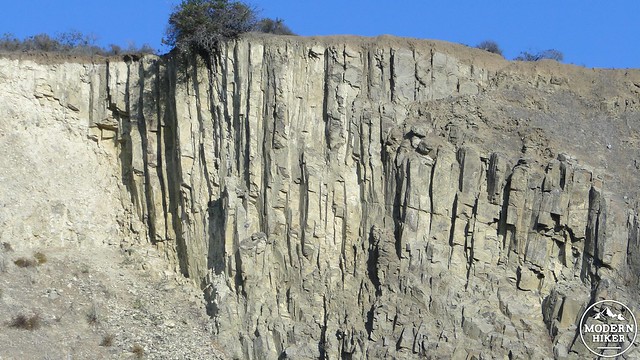 The trail winds down along the ridge until it comes to a short scramble down to the main trail leading to the spillway above Lake Calavera. For those who could do without the drop, the main trail from the peak leads away left, and is clearly marked. It will end up in the same place without adding to your anxiety levels. 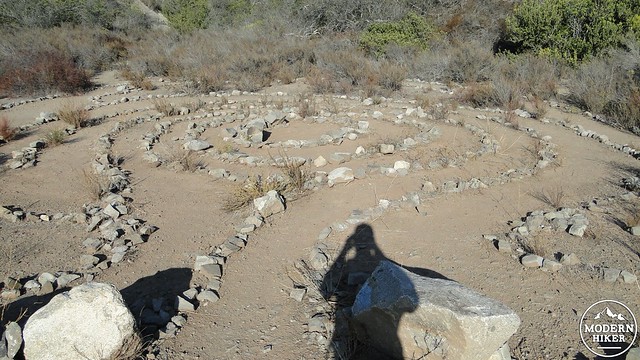 Before you get to the dam, there’s a nice little side trail that wanders over to the site of the rock quarry. Enterprising hikers of yore have placed rocks in nice formations, including a heart, a smiley face, a peace sign, and the word love. However, the labyrinth is a nice littte surprise that is likely to delight children and adults alike. 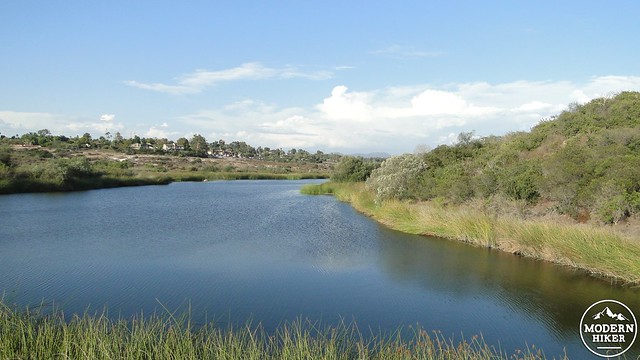 The spillway crosses over the top of the dam holding in the lake. This dam was built around the same time as World War 2. Climb up the concrete spillway on the other side to find the continuation of the trail. The trail will continue on a wide, smooth trail along the north side of the preserve until this track branches off on a separate trail that stays closer to the water. Due to the thick groves of bullrushes along the shore, access to the lake is very difficult, but this side trail will get you about as close as you can get without going into the rushes. 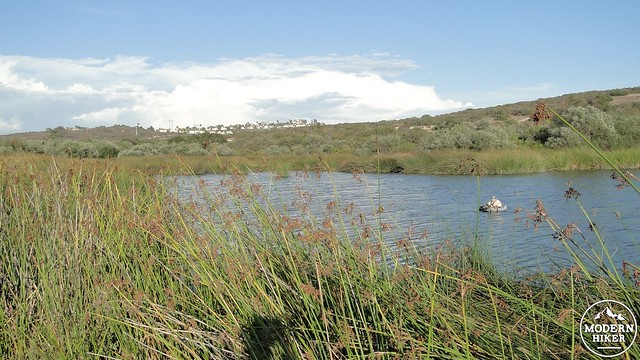 The side trail eventually rejoins with the main trail to cross over the creek and merge back at the junction to the peak. From here, you will retrace your steps back to Oak Riparian park along the boardwalk through the marsh.

The trail conditions are generally pretty good aside from the social trails up and down Cerro de Calavera.

The nearest camping can be found either at Carlsbad State Beach's campground or at nearby Guajome County Park. Since Carlsbad is the more popular option, we've included that. Be aware that it is really difficult to get a campsite there given its popularity and proximity to the beach.

From Highway 78, exit at Emerald Drive and head south, turning left if coming from Escondido and turning right if coming from Oceanside. Emerald will become Sunset Dr, which you will follow for .6 mile before taking a right turn onto Emerald Dr. After .4 mile, turn left onto Lake Blvd. After .2 mile, you will find Oak Riparian Park on the right side of the road. There's usually parking at the park, but if the lot is full you can find street parking nearby.