Hungry Bill’s Ranch is located in Johnson Canyon, one of the most well-watered canyons in Death Valley. Its lush springs and perennial stream snake through soaring canyon walls leaving behind the rocky alluvial fan that spills from the canyon mouth down to Death Valley’s salty floor. A rocky 4WD road crawls up to the canyon mouth and trailhead and makes getting here half the battle or half the fun, depending how you look at it. 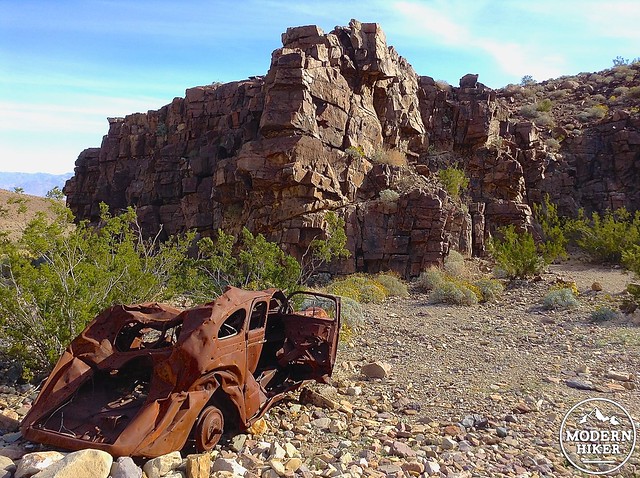 An old car marks a scenic backcountry campsite along the Johnson Canyon Road.

Because water is so precious in Death Valley, its presence can indicate a colorful history, and Johnson Canyon is no exception. Johnson Canyon was the site of a Shoshone ancestral village and was still very much in use by the native Shoshone when rancher William Johnson moved in and established a ranch in the 1870’s. He built irrigation channels and terraces and planted beans, squash, melons, corn, and fruit and nut orchards. His enterprise was motivated by the unruly mining camp of Panamint City, five miles over the Panamint Pass on the western side of the mountain range. Johnson sold fresh vegetables via the “fresh vegetable route” leading over the pass. The lawless silver camp swelled to over 2,000 inhabitants at its highest point but ultimately dwindled as veins played out and the town was devastated by a flood. Johnson abandoned the ranch. 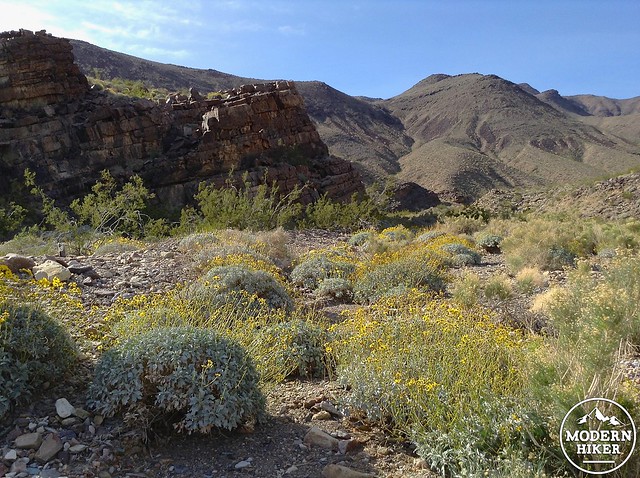 Wildflowers along the Johnson Canyon Road.

Some years later Hungry Bill, a Shoshone man known for his insatiable appetite, returned to his tribe’s former lands with his family and cleared more acres, planted more trees, and tended the gardens. Johnson’s ranch had been built on the site of Puaitungani, one of at least five main Shoshone villages still in use in the southern half of Death Valley. The family lived at the ranch until Hungry Bill’s death around 1919. Steeped in history and teeming with natural beauty, Hungry Bill’s Ranch is worth the effort. 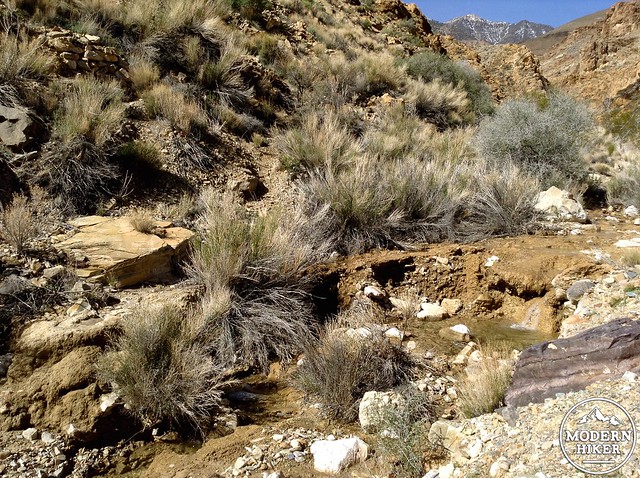 The stream from Wilson Spring.

The road to the mouth of Johnson Canyon ends at scenic Wilson Spring marked by willows, cottonwoods and a creek. There are several good backcountry campsites here. From Wilson Spring, an unmarked but well-defined trail, leads west into Johnson Canyon toward the site of Hungry Bill’s Ranch. It follows an intermittent stream. 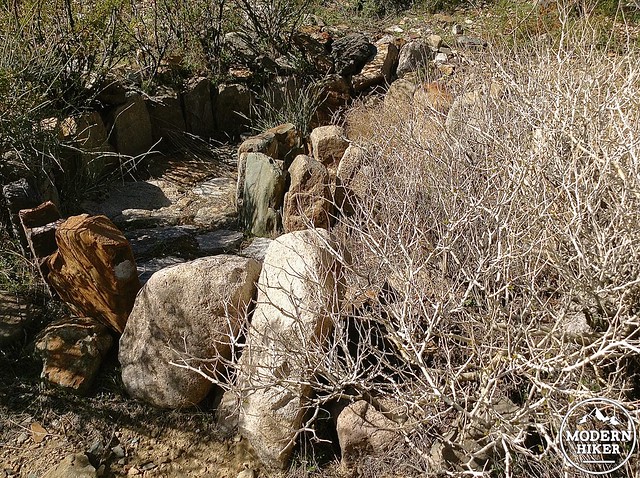 A well-preserved arrastre once used in mining efforts.

At 0.1 miles look for a well-preserved stone arrastre on your left–it’s a few feet across and looks kind of like a circular stone fire pit. A relic of mining in the canyon, it was used as a crude mill to pulverize ores like gold in order to extract the metals. Keep a look out for two other arrastres on the same side of the creek at .5 and .1 miles. They are not as well-preserved and are harder to spot.

At .3 miles the canyon walls begin to narrow and rise dramatically, and you’ll be walking next to a bubbling creek with small pools. This idyllic walk soon turns into a dense oasis with wall to wall greenery. To avoid the tangle of vegetation that crowds the canyon floor, follow a use trail on the south (left) side of the canyon as it climbs steeply to bypass the creek from the rocky canyon walls. 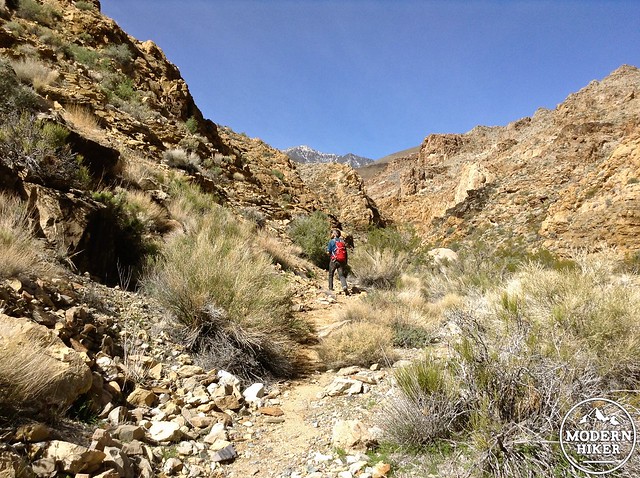 The trail to Hungry Bill’s with snow-capped Telescope Peak in the background. 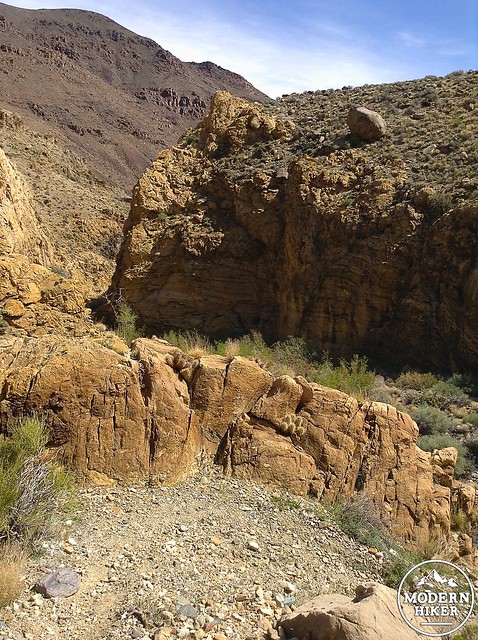 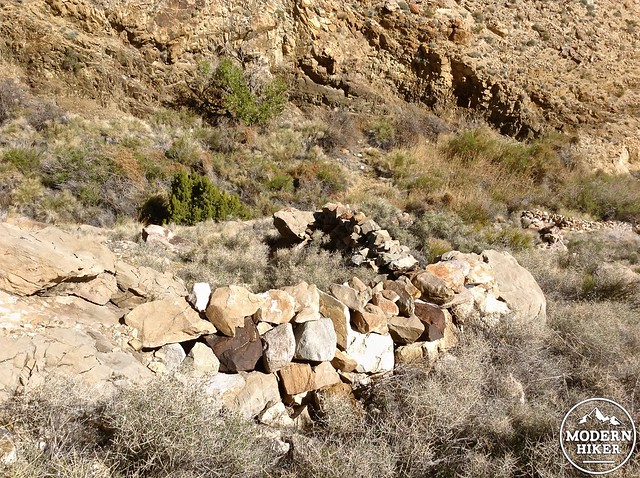 The stone walls have no mortar, but they are impressively constructed.

Death Valley has few maintained trails. The trail through Johnson Canyon is actually a series of use trails made by hikers picking their way along the path of least resistance. You may find that some trails wander back to the creek and disappear into the brush or split off. The most consistent trail system is on the south side of the creek and follows the higher paths along the gorge’s rocky rims.

Most of the elevation occurs within one mile over the course of the creek bypass. The elevation gain is steep, but if offers beautiful views of the canyon and the inviting sound of the creek below. You’ll begin to see man-made stone walls snaking along the sides of the canyon in between the creek and the upper trail. No one knows exactly who made them or why, but they’re beautifully constructed and one of the highlights of the trail. 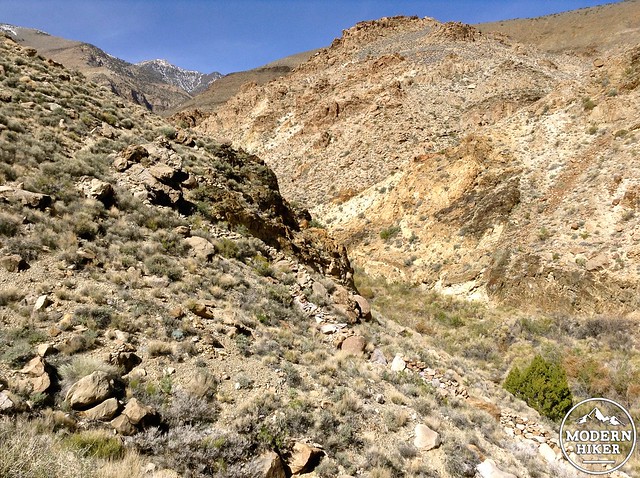 Hundreds of feet of stone walls snake along the canyon. 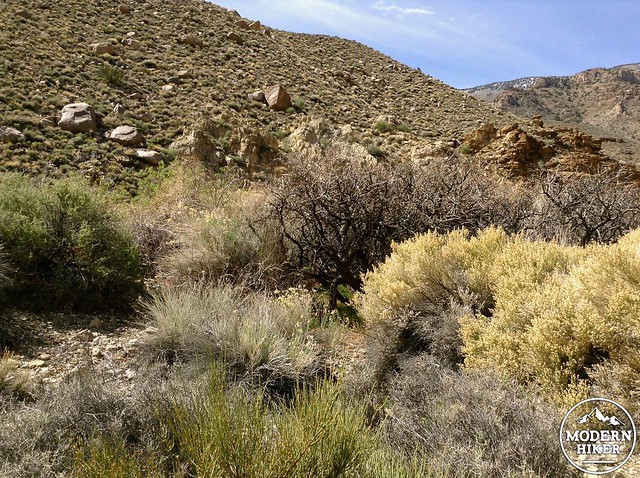 At 1.2 miles, the canyon makes a sharp jog at the second (unnamed) spring, and you’ll have to cross the creek twice in succession. Just beyond the head of the spring lies the beginning of Hungry Bill’s Ranch. It sprawls along the canyon wash, green cleared fields dotted with defunct orchards and more snaking stone walls. This first clearing is actually thought to be the site of Hungry Bill’s Camp. The second clearing beyond has more cleared fields and hundreds of feet of sturdy stone walls easily visible in Google Earth. It was thought to be the site of Johnson’s Ranch later cultivated by Hungry Bill and his family. There is a lot to explore–foundations, fences, trails, irrigation works all set against the charming canyon backdrop and the sound of the flowing creek. Watch out for rattlesnakes in the stone structures. 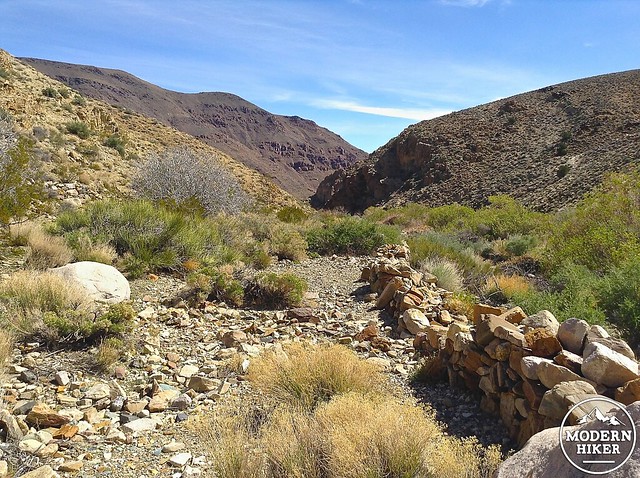 It’s a good place to turn around for a day hike. With planning and an arranged shuttle, ambitious backpackers can plan a route over the pass via the fresh vegetable route to explore the striking ruins of Panamint City.

The trail is well-worn but unmaintained. It follows the canyon, crisscrossing the perennial stream several times. Cairns mark the crossings, and the trail is generally easy to follow. Because of all the water the canyon is choked with vegetation, and the trail tries to stay on one side or the other. The most continuous trail system is on the south or west side of the canyon.

Backcountry camping is allowed along Johnson Canyon Road after the first two miles. The road is steep and rocky, but there is one good campsite around the halfway mark. Look for a rock formation and old abandoned car on the left (south). This campsite is scenic, flat and sheltered from the wind. The best spots are located at the trailhead. Two-three sites are scattered around the trailhead at Wilson Spring, a small year-round creek at the mouth of Johnson Canyon. The closest developed campgrounds are Texas Spring, Sunset, and Furnace Creek in the park hub of Furnace Creek, about 30 miles to the north. Because of the rough road to Johnson Canyon, the drive to these developed campgrounds can take up to two hours.

From the park hub of Furnace Creek, head 7 miles south to access the West Side Rd. Turn right and travel south 20.9 miles to Johnson Canyon Road and turn right. From here it is 10 miles to the trailhead. The length of the road is rough with rocky washouts and boulders. It requires a high clearance / 4WD vehicle, but it doesn't require any special technical driving. The road ends just before Wilson Spring (look for a cluster of willow trees). Park off the road. The trail heads west from here.