A tour through some of the highlights of the southwestern corner of Anza-Borrego Desert State Park, that can be done as a strenuous 14.6 mile hike, or in easy 1-2 mile chunks if you’re willing to drive on dirt roads to get further into the interior of the desert. The landscape is relatively flat and easy if you hike, it’s just the distance that makes it tough. You’ll be rewarded with wide-open vistas of the desert, some historic old post road markers, the ruins of a Depression-era mountaintop homestead, some ancient Native American pictographs and morteros, and a stunning dry waterfall at the end of Smuggler Canyon. A great place to explore in the largest State Park in the contiguous U.S.

Ghost Mountain was on my absolute to-do list during my list trip to Anza-Borrego. I was hoping to drive down the dirt road for a while, then stop to hike a few of the shorter trails — but a recent rainstorm, along with some muddy ruts in the washboard road and my forced me to leave my car by the paved roads … which made for a very, very long hike.

If you don’t want to take you car up the dirt road, park just off the Great Southern Overland Stage Road. There’s a small pit outhouse and an information board by the dirt road, and more often than not, a few tents pitched among the brush. 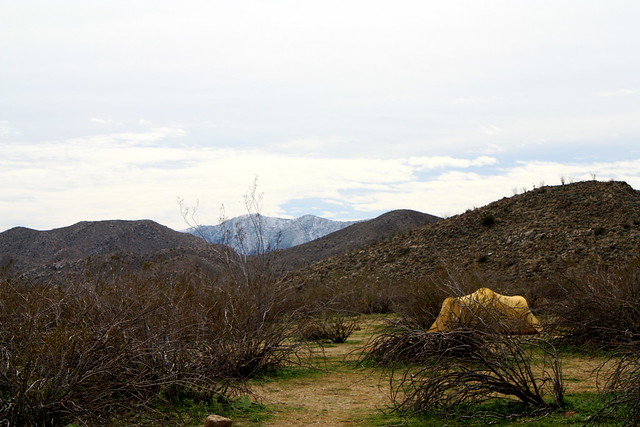 Take plenty of water and head on the main dirt road, as it follows a low ridge of mountains southward.

At about 0.6 miles, there is a small turn-off to Foot and Walker Pass, which has a California Historical Landmark Plaque for the Butterfield Overland Mail Route, a mid-1800s mail route from Saint Louis to San Francisco, via Southern California. The plaque itself is just a few hundred feet off the road, so it’s not very out of the way if you’re interested. History buffs and plaque chasers take note. 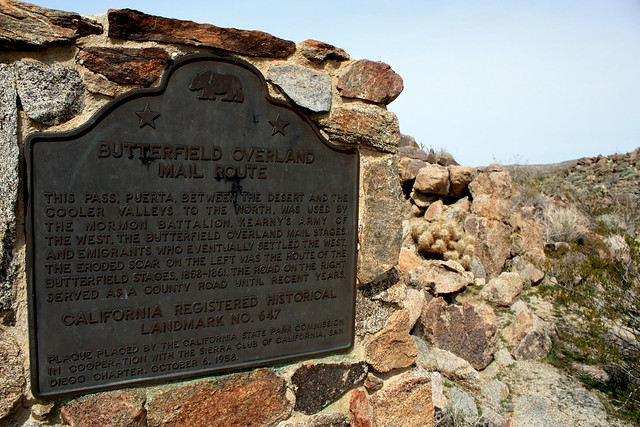 At about 1.2 miles, you’ll pass a large group camping area on the side of the dirt road. Pass by and continue on the road, walking through some great stretches of the seemingly empty desert of Blair Valley — just watch out for the chollas. They tend to get a little too close to the road sometimes. 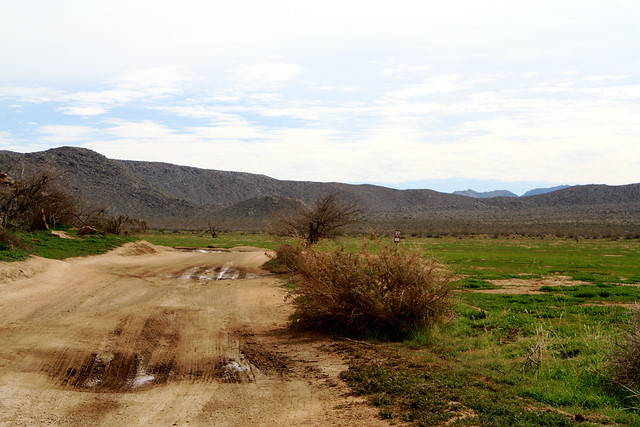 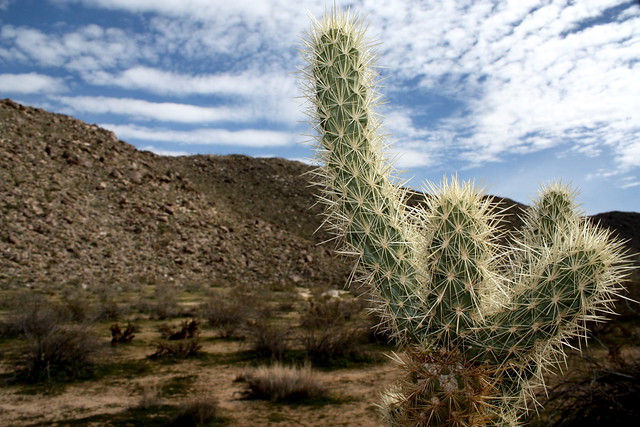 At about the 3 mile mark, the road forks, with one route leading more east. Stay headed south, toward the Marshal South Home (the other direction leads toward the pictographs and morteros). In another 0.4 miles, you’ll reach a small clearing in the dirt road with a sign pointing toward the homesite, as well as a plaque on Yaquitepec – which is what South called his mountaintop home.

For almost 20 years, South and his family lived on a hand-built house on the western slope of Ghost Mountain. South made money as a writer, and published monthly columns in Desert Magazine detailing his family’s attempt to survive off the harsh desert landscape (you can read an extensive history of the Souths at DesertUSA).

Today, the adobe house they built is in ruins, but it’s still a fascinating place to explore. Especially if you’re driving out to this location — because the trail itself is pretty short. 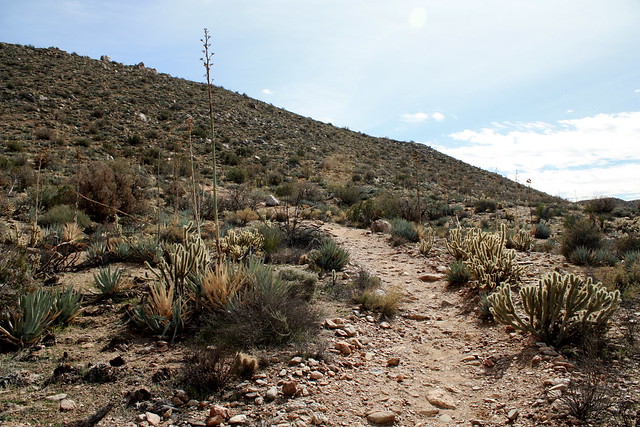 The sign at the trailhead says 1 mile, but I clocked it at 0.6 to the actual homestead. The trail itself is rocky, but not very difficult. If you’ve hiked the entire route so far, its a welcome relief from the monotony of the dirt road, and you’ll enjoy it. It’s easy to get distracted by the sweeping views you’ll have of the surrounding peaks and valleys, but be sure to watch out for the yuccas and cacti that seem to love getting as close to the trail as they possibly can. 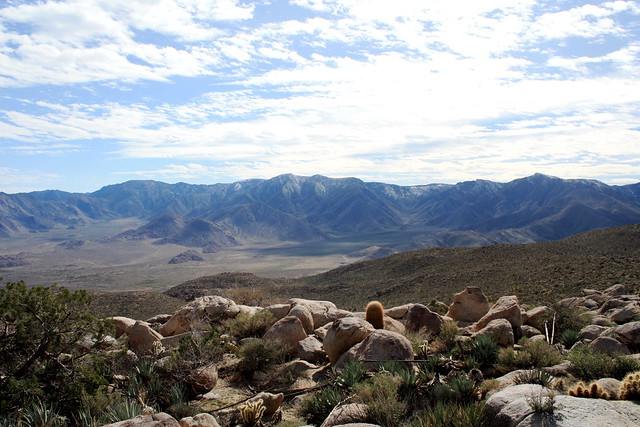 It’s only about a 360 foot elevation gain from the trailhead to the Yaquitepec site, but it may feel like more than that just because your elevation gain so far has been gradual enough to be almost unnoticeable. The trail is well-worn and easy to follow, although a few older paths do branch off once in a while — it’s easier to take a wrong turn on the descent, though. As you climb over low boulders and dodge sharp desert-type plants, you’ll eventually come to a long plateau just below the actual summit of Ghost Mountain. The ruins of Yaquitepec are pretty obvious — 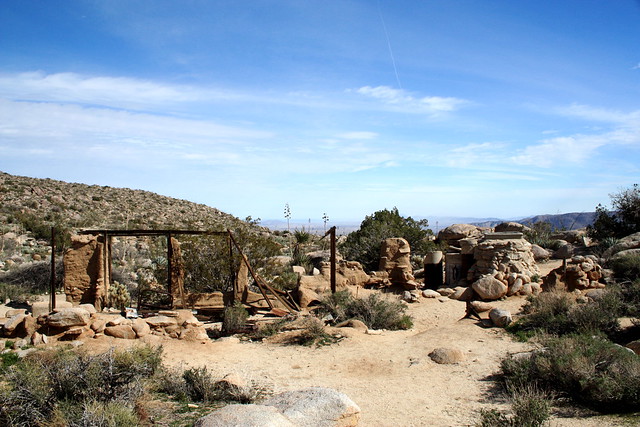 There are actually a surprising amount of remains — I found a few adobe and cement walls, a bedframe, some wooden beams, the remains of the oven, some metal cans, and some of the water-collection cisterns scattered around the home. 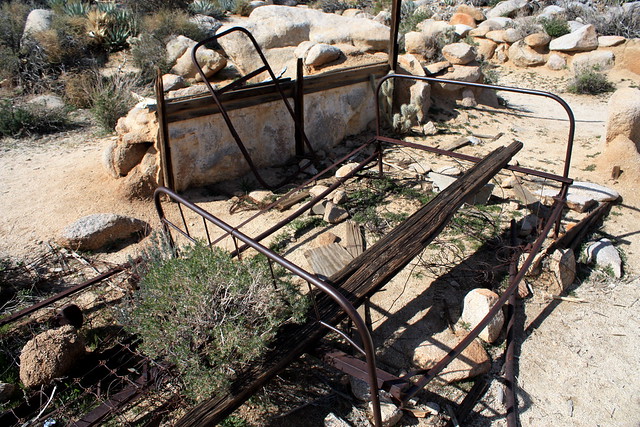 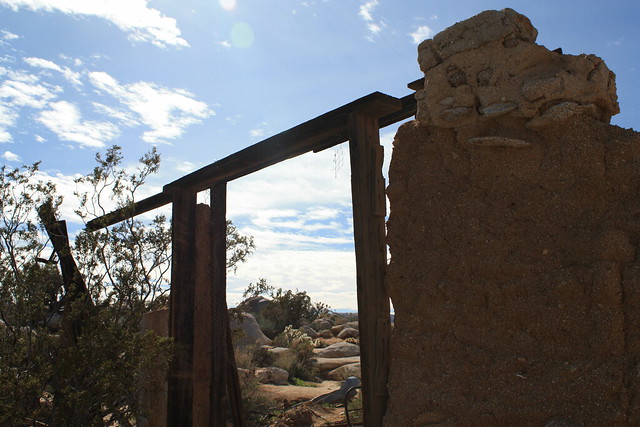 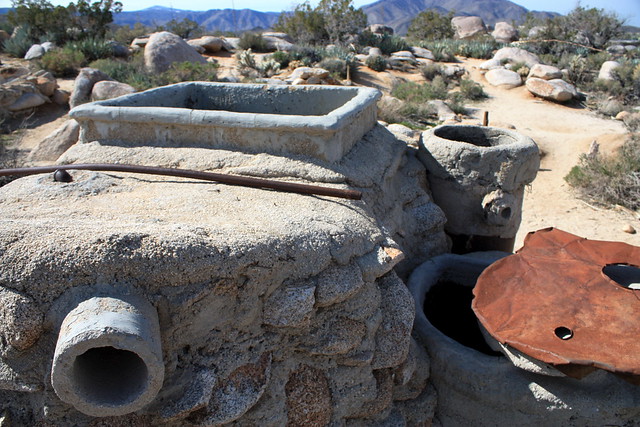 Drink in your mountain-and-desert views and wonder what it must have been like to live up here for 17 years. Get just a little bit jealous, then head back the way you came, making sure to keep an eye on the path in front of you. I took a spur trail down an old route, and ended up looking down a very steep decline — so pay attention to where you’re walking.

When you get back down to the trailhead, get back on the dirt road, and keep bearing east at the junctions at the 4.8 and 4.9 mile marks. Stay on the dirt road, ignoring two spur roads that head north. These will take you to an unofficial but popular primitive camping area hidden between some peaks, and another road that heads into Little Blair Valley (which you can take on the way back and meet up with the main road by passing through Foot and Walker Pass. But you will continue east through the valley. 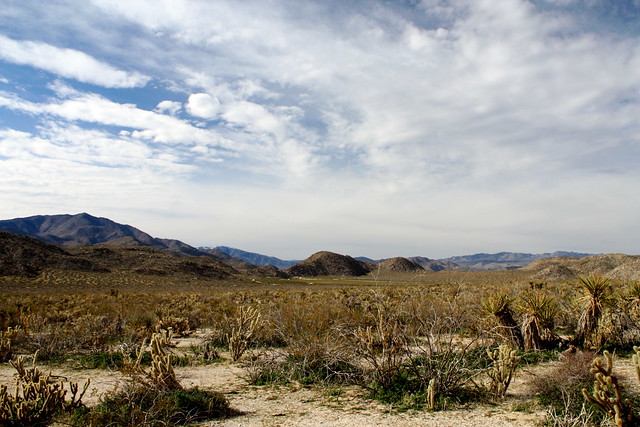 At 5.6 miles, there is a short turn-off trail to some old Native American morteros, stone mortars dug into the rocks of the desert, used to grind grains and herbs. You can swing by and check these out, or just keep continuing to the 6.9 mile mark, where you’ll reach another small parking lot and trailhead for the “Pictograph Trail.” 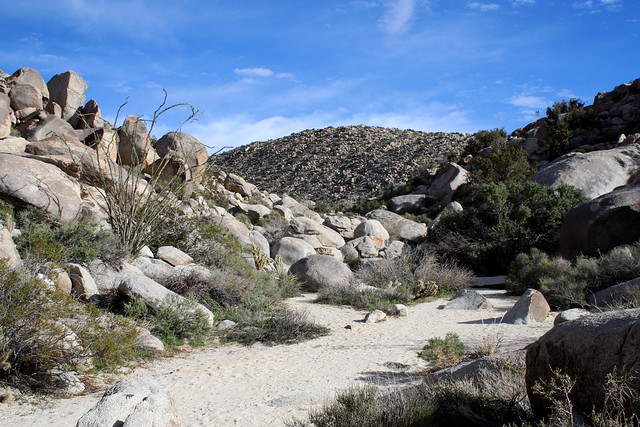 This is another very short trail that climbs over a short rocky area, then hugs the side of a rock wall as it continues down a broad wash. It’s only 0.8 miles from the trail marker to a large boulder to the south of the trail, which is covered in red and yellow pictographs from the Kumeyaay people. 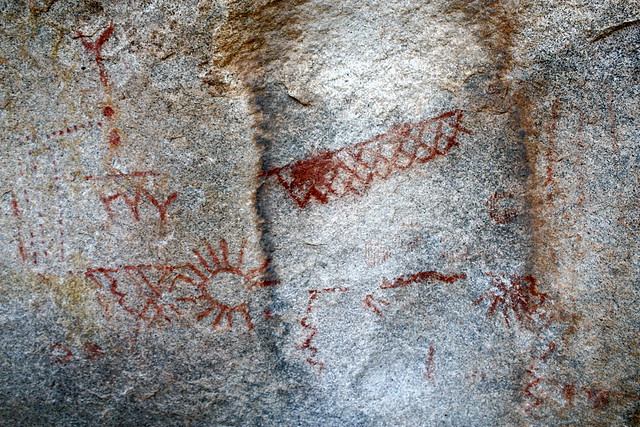 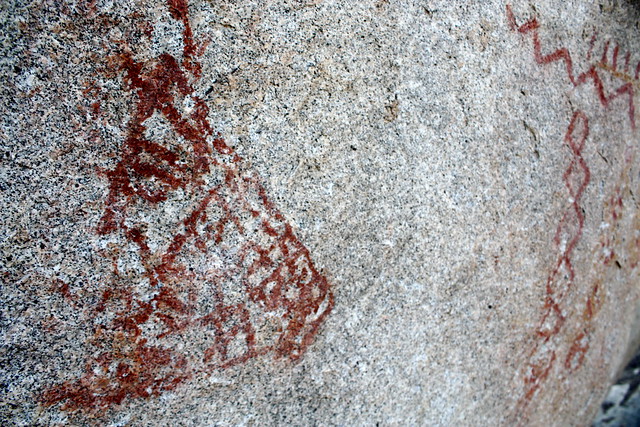 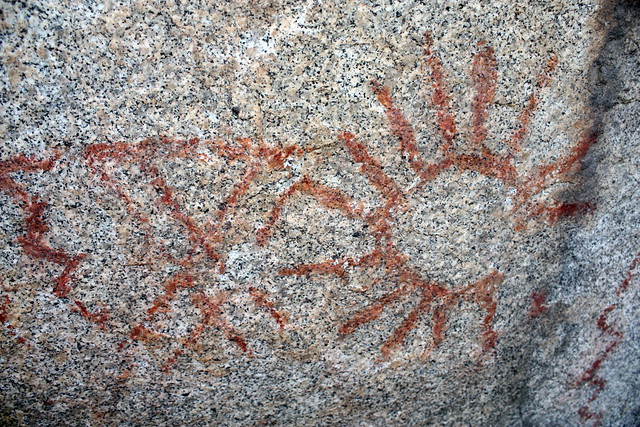 The pictographs are between 200 and 1000 years old, and are probably associated with a female puberty rite. Once you’re done soaking in the history of the area, don’t turn back — continue down the wash for another half mile. 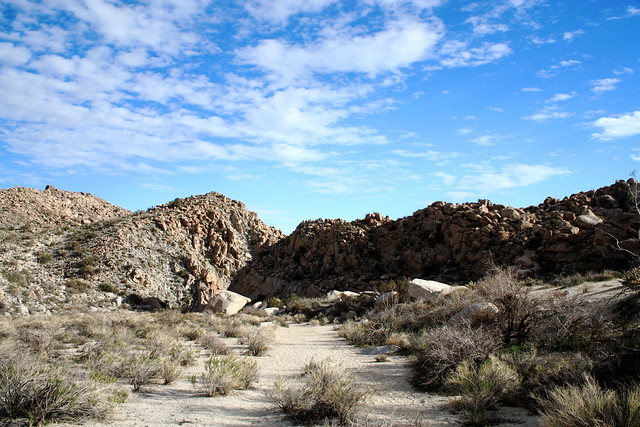 While it may not look like much while you’re hiking, keep going down the wash as the rocky walls continue closing in on you. Eventually, you’ll be funneled into a thin canyon that turns sharply south, and there, you’ll find yourself standing at the top of a very impressive dry waterfall, tumbling directly into Smuggler Canyon below. 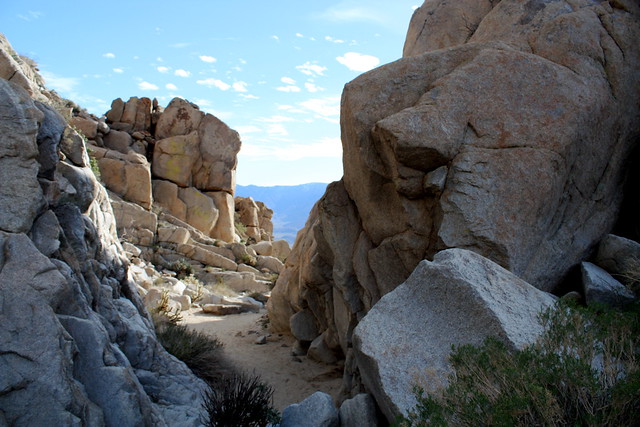 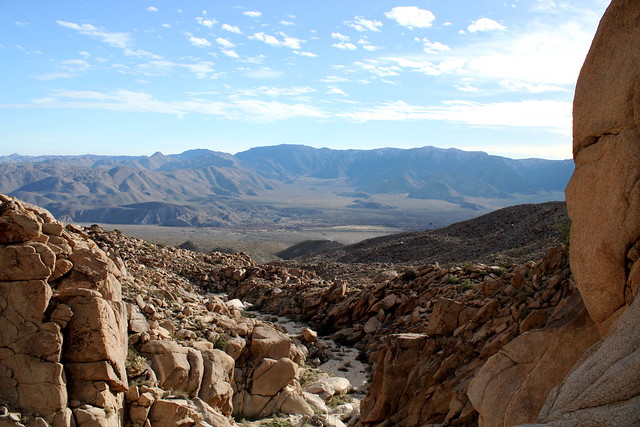 From there, it’s a long walk on the dirt road back the way you came … or, if you drove in, just a short trip to the car and a drive back to the main road.

Excellent. Most of this hike is on a dirt road, which has very easy to read signs at the junctions. The trails themselves are well marked and well traveled, although it is easy to take a wrong turn while coming down from the Yaquitepec site. Just keep your eyes peeled for the climbing route and you should be fine.

You can camp for free in Anza-Borrego as long as your car is at least one car-length off the road, you don't go off-road driving, keep any fires in a metal container, and pack out your ashes. In addition, there are also several primitive and three developed campsites in the park. The closest developed site is Tamarisk Grove.

From the North, take CA-78 toward Scissors Crossing, the junction with S-2. From Scissors Junction, travel south on S-2 (The Great Southern Overland Route) through Earthquake Valley for 5.8 miles. Turn onto the dirt road toward Blair Valley, and either park near the outhouse to hike, or continue driving along the dirt road, following the signs toward the South Residence and Pictographs.

Barring any bad erosion, the road is most likely navigable for 2WD cars if you drive carefully. I'd call the Visitor Center / Rangers to see how the road has fared from recent rains.

Any idea how drivable the dirt road is this time of year in a 2WD? I'd like to come out this weekend and camp/explore a bit with my dog, this seems like it could be a good option since dogs aren't allowed on hiking trails.

You can indeed backpack and camp out here. Anza-Borrego is great because you're allowed to camp anywhere as long as you're a certain distance away from roads and trails and natural features (there are some restrictions on fires, too). Check the park web site for more info.

Can you backpack and camp out on this trail? Or is it strictly a long day hike?

We made the drive in from San Diego and the 8 and then came across the Imperial Hwy. We saw a man seriously injured, maybe near death, after he tried to harm a coyote near the airport road.

Cool article. This area is one of my favorite regions of ABDSP, so much to see without having to go too far. Another good day hike from this area is up Whale mountain, which features several thousand feet of elevation gain and scrambling over huge boulders and dwarfed pinyon pines.

i should include this in my hiking trails list to visit for the coming months. wonder how it'll go if i go here at night though :)

[...] favorite hiking site recently profiled two hikes in the area, so check it out if you plan on going.  We hiked the pictograph trail, and also drove [...]

Sorry. Haven't had my coffee yet. Wrong website. It is actually www.ghostmountainmovie.com.

I made a festure-length documentary about the South family's life on Ghost Mountain that came out last year. It's called THE GHOST MOUNTAIN EXPERIMENT and you can see information at www.ghostmountainexperiment.com. I'll be having a screening and discussion on March 20 at Agua Caliente County Park (FREE) and on March 21 at the Anza-Borrego State Park visitor center. Then I'll be leading a hike up Ghost Mountain on March 22 and tell more stories of the family and the making of the documentary. I hope you can all come. You can contact me through the website.