Just outside of the outdoor Mecca of Moab, squeezed next to the larger and generally busier Island in the Sky District of Canyonlands National Park lies tiny Dead Horse Point State Park. It could be easy to overlook this 5300-acre park for the bigger name attractions nearby, but doing so would deprive you of some of the best views of the Canyonlands – as well as the only reservable camping in the neighborhood.

This State Park has a small but excellent system of hiking and mountain biking trails for visitors. There are options to do 1.1, 4.2, and 9 mile biking loops in the northern part of the park, while the southern end is for hikers only. The loop described here hits most of the major overlooks and spur trails, but you can add or subtract as you wish to make your hike easier or more difficult. 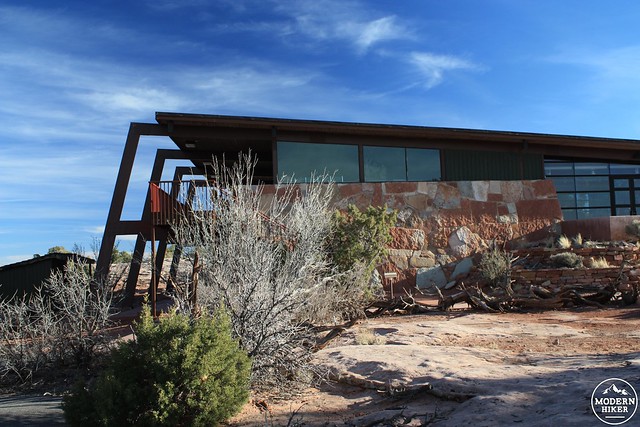 Once you’ve soaked in the Center, loop around the building to the east, where you’ll immediately be greeted with some unbelievable views of the distant 12,000-foot La Sal Mountains and the dizzying drop to the Colorado River some 2000 feet below you. 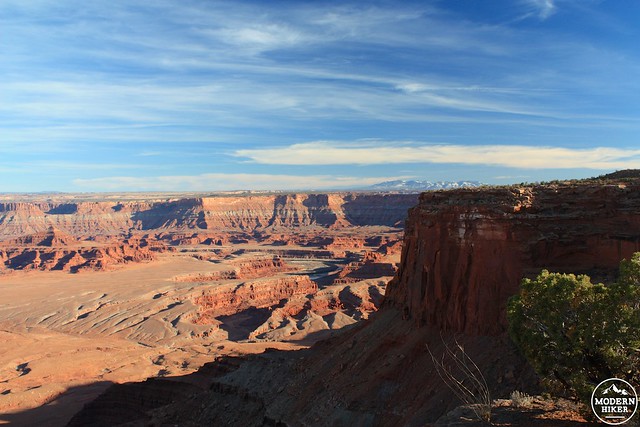 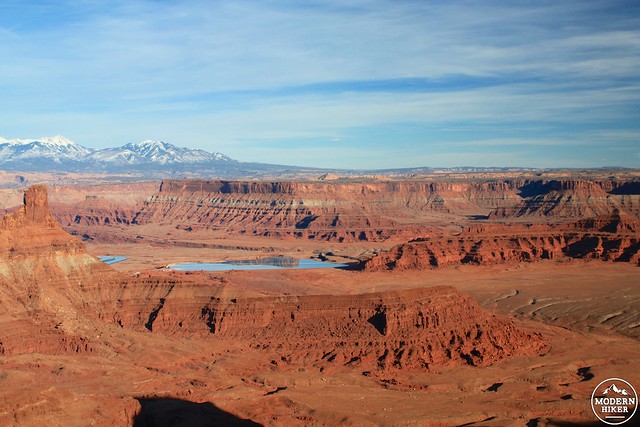 The trail circles around the Visitor Center and at about the 0.2 mile mark keep to the right to head west on a wide dirt trail. This trail travels through some fragrant high desert brush. At about the 1/3 mile mark, the trail crosses the paved road to the viewpoint and campground and parallels the campground road for the next 0.2 miles. Unless the campground is completely filled, chances are this section of the trail will be quiet and peaceful … even as it passes several campsites and dumpsters along the campground road. 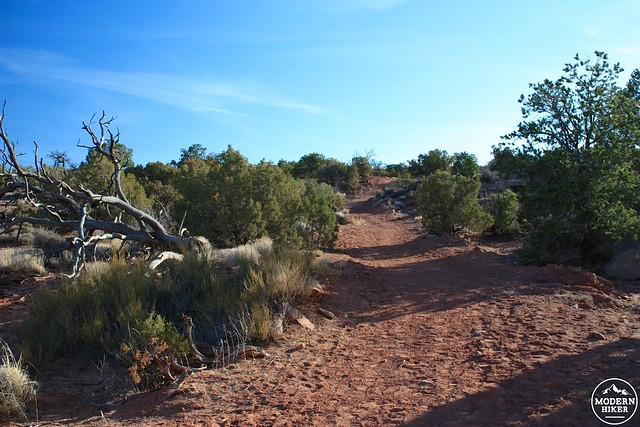 Ignore the turnoff for the Big Horn Overlook trail (or take it for an additional 2.5 miles roundtrip). The trail continues west and as it makes a very gradual descent you’ll be able to look above the sagebrush and dwarf pinyon pines to see the ground fall completely away at wide Shafer Canyon – then come back at almost the same level you’re walking on across the canyon in Canyonlands. 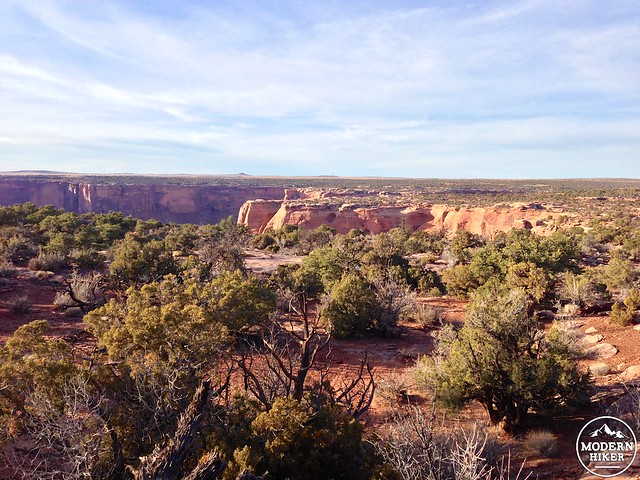 At the 0.9 mile mark, take a right to join the short spur to the Rim Overlook. You’ll pass through some twisted junipers for 0.25 miles until you reach the western edge of the plateau and can take in Shafer Canyon from the Rim Overlook. 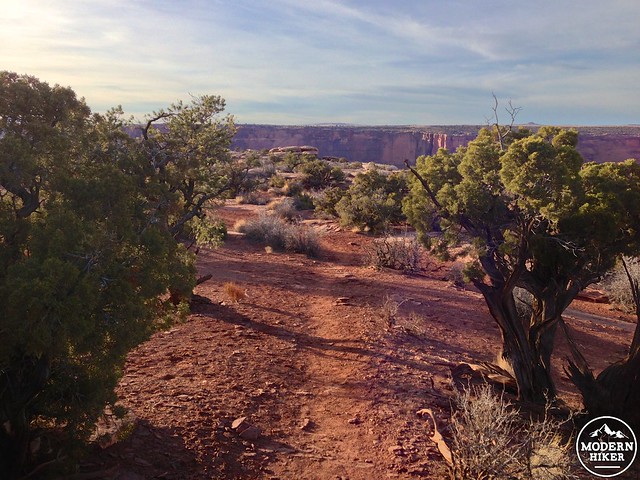 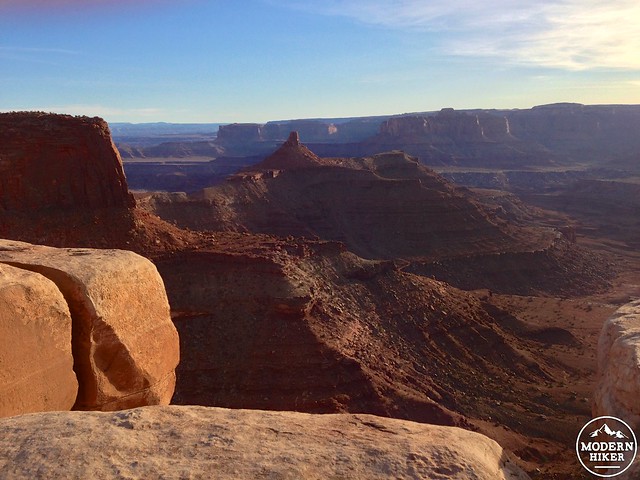 After you’ve picked your jaw off the ground, rejoin the West Rim Trail and continue south. The trail here – and for much of the rest of the route – shifts from established dirt path to slickrock trail. Slickrock hiking – that is, hiking across long stretches of solid rock while following stone cairns – is an interesting experience, especially if you’re used to mostly hiking on established trails or with painted blazes as guides. It can be difficult to keep your eye on the cairns when you’re surrounded by amazing canyon views, but you’ll have to remember to keep glancing down to make sure you’re on the right path … otherwise, it’s surprisingly easy to find yourself well off the trail.

The West Rim Trail snakes its way south near the western rim. You’ll occasionally get some killer views of the Canyonlands from the trail, but for the most part the trail is just too far from the rim’s edge to give you those sweeping full-canyon views.

Which, of course, doesn’t mean you won’t have some great eye-candy. 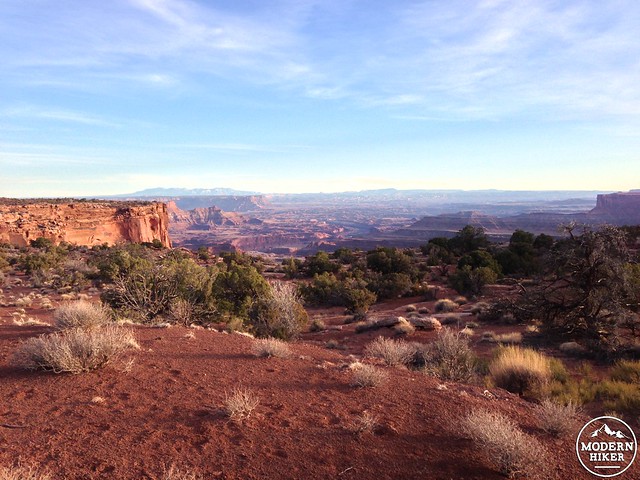 Worry not, patient hiker – for just half a mile after the turnoff for the Shafer Overlook is a very short use-trail across the slickrock to an unbelievable view of a large meander in the Colorado River at the Meander Overlook. 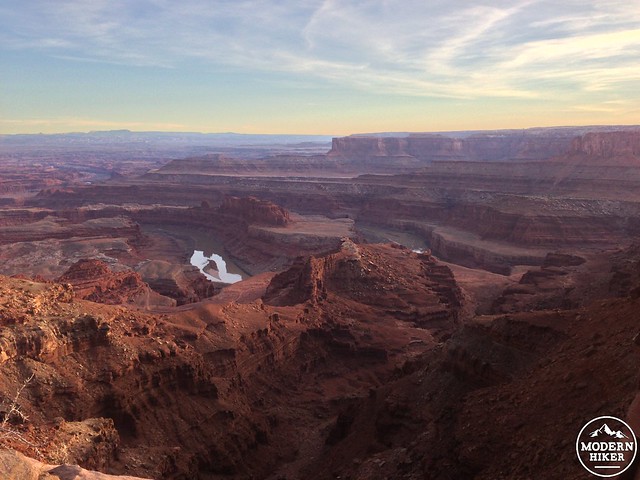 There are six major layers of sedimentary rock visible in these canyons, from the Kayenta Sandstone you’re hiking on through the sharp vertical cliffs of the Wingate Sandstone, the purplish uranium-bearing slope of the Chinle Formation, the red-tinged Moenkopi Formation, the white, layered Cutler Formation, and the Honaker Trail Formation that sits at the level of the Colorado. That’s 300 million years of earth history in a single view. Not too shabby, right?

Continue along the West Rim Trail. At the 2.8 mile mark, you’ll start hugging the road again as the plateau dramatically narrows to a width of about 30 yards.

According to legend, Dead Horse Point got its name when cowboys used this point as a makeshift corral for wild horses roaming the mesa. They fenced the horses in at the edge of the cliffs, selected the ones they wanted and – allegedly – left the rest to die of thirst within view of the Colorado River.

Thankfully today there are no dead horses at Dead Horse Point – only a picnic and parking area and beautiful overlook of the canyon below.

Most people I talked to in Utah said the views from Dead Horse Point were better than those from viewpoints at the Island in the Sky District of Canyonlands and I can’t say I disagree. The panoramas from the elevated viewing area here are absolutely stunning – and these pictures are a feeble attempt to capture the unbelievable beauty that surrounds you on all sides. I was lucky enough to catch two sunsets from this point while I was camping here and the memories have not been forgotten. 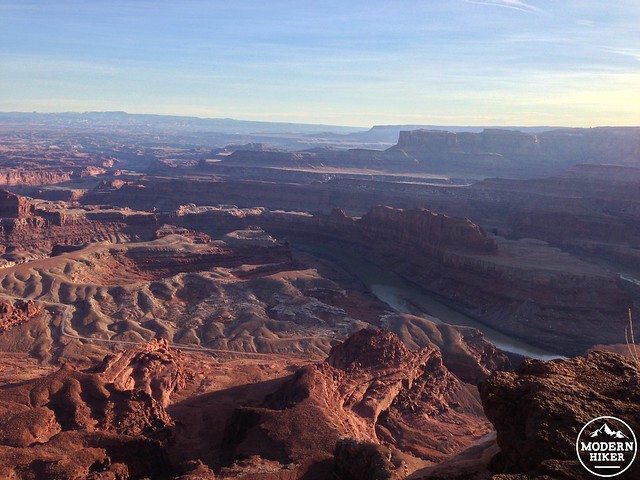 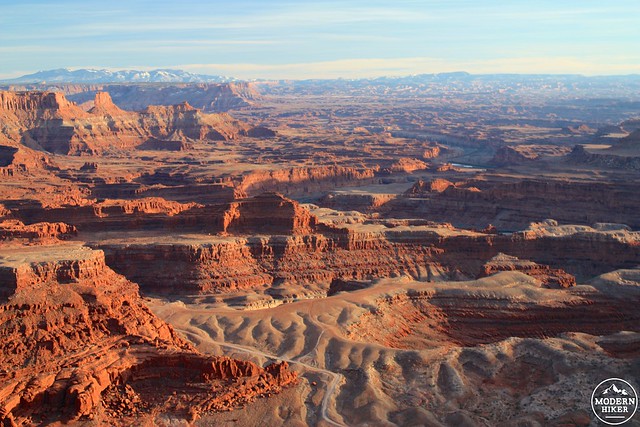 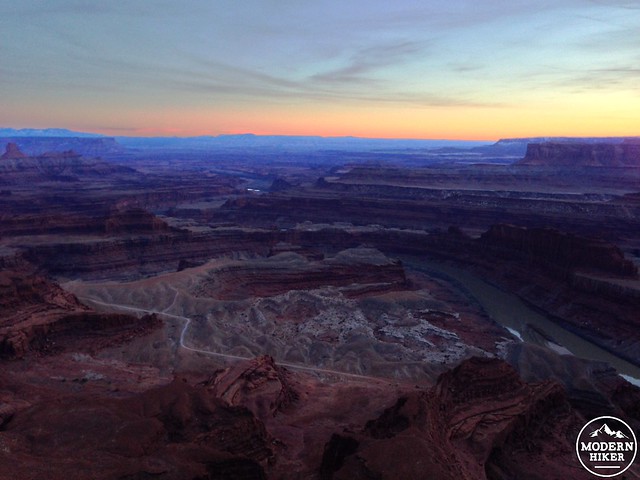 Very good. Trails in this park are well-maintained and mostly well-signed. When they're not signed, the park's trail system is small and simple enough that it's difficult to get lost.

There are two campgrounds in Dead Horse Point State Park - a Group Site and a regular campground. Both have fire pits, shade structures, and spaces for a few tents. They are also near restrooms with flush toilets and running water.

From Moab, head north on US 191 for 9 miles, then west on State Route 313. Stay on this road for 23 miles until you reach the Park's entrance (don't head toward Canyonlands National Park). There is a $10/vehicle fee at the time of writing. For more information and Visitor Center hours, be sure to check the Park's web site.